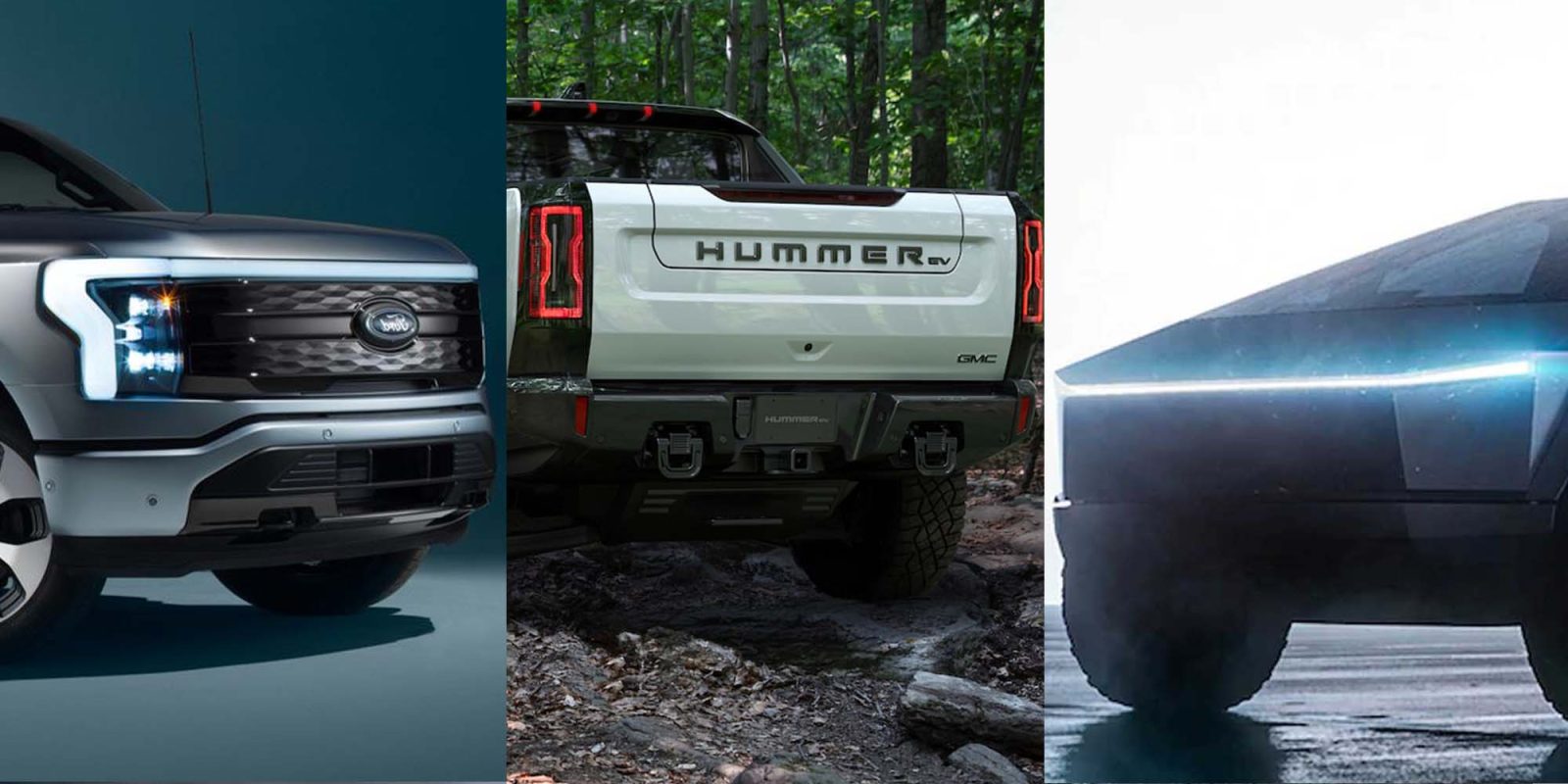 As we sit in the midst of 2021, electric vehicles remain a major storyline. Even long-established, legacy automakers (some with over 100 years of experience) have finally wisened up and pivoted toward EVs to remain competitive. In the next couple years, three major automotive brands, old and new, will release three highly anticipated electric trucks. This includes the Tesla Cybertruck, the Ford F-150 Lightning, and GMC’s modern spin on a gas-guzzling behemoth with the Hummer EV.

EV sedans began as groundbreakers and record setters since they are generally smaller and less expensive to manufacture. Now that EV automakers seem to have found a stride in production and battery innovations, larger electric trucks are beginning to become a genuine reality.

Below is a side-by-side breakdown, outlining how each of these EV trucks came to be, where they currently stand, and how they compare to one another based on what we know so far.

Let’s start with the youngest automaker on this list, Tesla. The American automaker’s 17 years of existence may pale in comparison to the combined 126 years of experience between Ford Motors and General Motors Company (GMC). However, the veteran automakers’ experience lies mostly with combustion engines and fossil fuels.

When it comes to electric vehicles, Tesla’s market cap valuation of $700 billion has ensured a comfortable seat at the top of the EV food chain. Trust that as these other automakers develop their own electric vehicles, the Tesla logo is the target at the center of their office dartboard.

The Tesla Cybertruck was unveiled in November 2019 with a glass-shattering reveal, showcasing unique design and performance.

The truck stands out as the most futuristic-looking electric truck on this production list… and on any list, for that matter. The exterior is comprised of an exoskeleton of 30x cold-rolled stainless-steel structural skin and Tesla armored glass windows.

Tesla tallied over 250,000 pre-orders in the first week. By February 2020, they were at half a million. Last Electrek checked, the count was well over a million.

In November 2020, Elon Musk revealed Tesla’s plans to release an updated Cybertruck design. As for a timeline, Musk said, “a month or so.” Well, that didn’t happen.

After GMC shared footage of its new Hummer EV doing a crabwalk, Tesla announced the Cybertruck will also come with similar four-wheel steering.

Here’s the latest Cybertruck news to keep you in the loop:

Ford Motor Company has remained a top name in automotive manufacturing since the early 1900s and remains one of the largest automakers in the world today.

At one point in history, Ford and GM were two of the top three automakers in the world by market share. While Ford remains a major global player in the auto market, it has seen its share shrink in recent years, especially as the EV market grows.

That said, Ford’s F-series has been around for over 70 years and still remains a banner vehicle line for the automaker. These sales have helped the F-series remain the best selling pickup in the US since the early ’80s.

In order to save costs and stay competitive, Ford chose to discontinue many of its sedans to focus on what has always sold well for it — trucks and SUVs.

Not to miss the inevitable wave of electric vehicles, Ford has made a huge pivot by finally embracing hybrid and electric options in its fleet.

A few years ago, the automaker promised an influx of all-electric vehicles and hybrids. In addition to the much-hyped Mustang Mach-E, the US automaker has now adapted a second Ford staple toward all-electric.

The Ford F-150 electric was enveloped in mystery as a prototype that could drift through the snow like a Fast & Furious film, and tow over 1 million pounds in train carts.

This past May, Ford began hinting at a name for this electrified F-150, before unveiling the Lightning banner a week later. Since then, the vehicle has received over 120,000 reservations ahead of order sheets opening this fall.

The F-150 Lightning will debut as a part of Ford’s latest pledge to have 40% of its total sales come from electric vehicles by 2030. Soon the F-150 will be joined by an all-electric Explorer and possibly even a Bronco.

While we don’t have all of the pertinent details of the F-150 Lightning compared to other SUVs like Cybertruck and the Hummer EV, the initial specs look quite promising.

Here’s the latest F-150 Lightning news to keep you in the know:

The last electric truck on our list is an old face with a fresh coat of eco-friendly makeup. GMC stands for General Motors Company and is undoubtedly the most brilliant name for a division of General Motors. (Eye roll.)

The GMC brand focuses on SUVs, pickups, and other large vehicles, but is known to put more of a luxury tag on these trucks in comparison to GM’s Chevrolet counterpart.

The Hummer saga began as a civilian version of a military Humvee fit for the likes of Arnold Schwarzenegger in the early ’90s. GM purchased the Hummer name in 1998 and moved to produce three different versions of the massive vehicle: The H1, H2, and H9… kidding, it was obviously the H3 (remember how clever GM is?)

After a decade’s worth of glory in music videos and various MTV shows, the gas tank on the Hummer’s life dropped drastically close to “E.”

This was due in large part to the 2008 recession and the world’s demand for limited fossil fuels. The H2’s 10 average mpg probably didn’t help its cause either.

By 2010, the last H3 rolled off the GM assembly line and dealerships began to shut their doors. Now, the Hummer name lives on after a welcomed greenwash from GM.

The rebirth of the Hummer

Ten years later, GM used the millions of eyes on the NFL Super Bowl to tease that the Hummer brand was back and would be sold under the GMC brand. Oh, and of course it’s fully electric this time.

Cut to fall 2020, when consumers (and Electrek) were able to get eyes on the new Hummer EV and what it will offer.

GM originally admitted it did not have a working prototype when it unveiled the truck. However, last December it released some impressive footage of a working Hummer EV to the masses.

While the most affordable version of the new Hummer is not slated to roll out until 2024, customers can expect more expensive and decked-out versions in 2022 and 2023.

Although, if you didn’t reserve an Edition 1 already, you may have to wait longer. GMC reported that this version sold out in 10 minutes after launching in December. How many new pre-orders actually sold out still remains unclear, though.

There are also now pickup and SUV variations of the Hummer EV. Furthermore, the specs GM has shared so far sound pretty impressive, especially its estimated torque of 11,500 lbs (although GMC almost certainly measured it at the axle to pump up these numbers).

For more details about pricing and trims, Electrek‘s Fred Lambert shared an awesome breakdown of the Hummer EV as well.

Check out the latest Hummer EV news below:

As promised, below is a comparison chart of what we currently know about each electric truck. These specs exist in piecemeal all over these automaker’s websites and have been collected into a nifty little chart for you.

It’s important to note some claims (ahem, GMC) have yet to actually be demonstrated. Many still remain estimates or targets provided by a respective truck makers, so take them with a grain of salt for now.

As we learn more, this chart will be updated:

Based on the information we previously had, Tesla’s Cybertruck was a longtime frontrunner in many of the categories.

Sure, they remain the only automaker on the list to provide all of the specs listed above, but the Cybertruck’s recent delays into 2022 puts it on a similar timeline with the Ford F-150 Lightning, and for similar pricing as well.

The Hummer EV might end up hitting roads before both the Cybertruck and F-150 Lightning, but if so, it would would only be $113k Edition 1 EV… so there probably won’t be too many of them out and about.

Much like the Cybertruck, GMC’s Hummer Edition 1 EV will offer a tri-motor AWD powertrain and is talking a big game in horsepower and acceleration. That being said, the Cybertruck tri-motor trim is still a wiser option based solely on price.

While the Hummer Edition 1 might beat Tesla to the road in 2021, the Cybertruck should still cost over $42,000 less. You can save that dough and buy a Tesla Model 3 to tow behind it or something.

From what we’ve learned so far, Ford’s F-150 Lightning is the only truck on this list not to offer a tri motor powertrain. That being said, the two (confirmed) prices we have so far are right in line with Tesla’s single and dual motor versions of the Cybertruck, setting the stage for a highly anticipated matchup – the electric version of the best-selling truck in the world against the first truck from the best-selling electric automaker in the world.

Again, the clear winner in the EV truck race will have to be determined over time. Each of these large automakers has lengthy rollouts planned for each of their trucks’ multiple powertrains, and we’ve already seen production delays.

Time will certainly tell. Check back soon for the latest updates. For now, here’s our close-up look at Tesla’s Cybertruck: