Tesla 2021: Everything we know about the latest Model 3, Model Y, and more 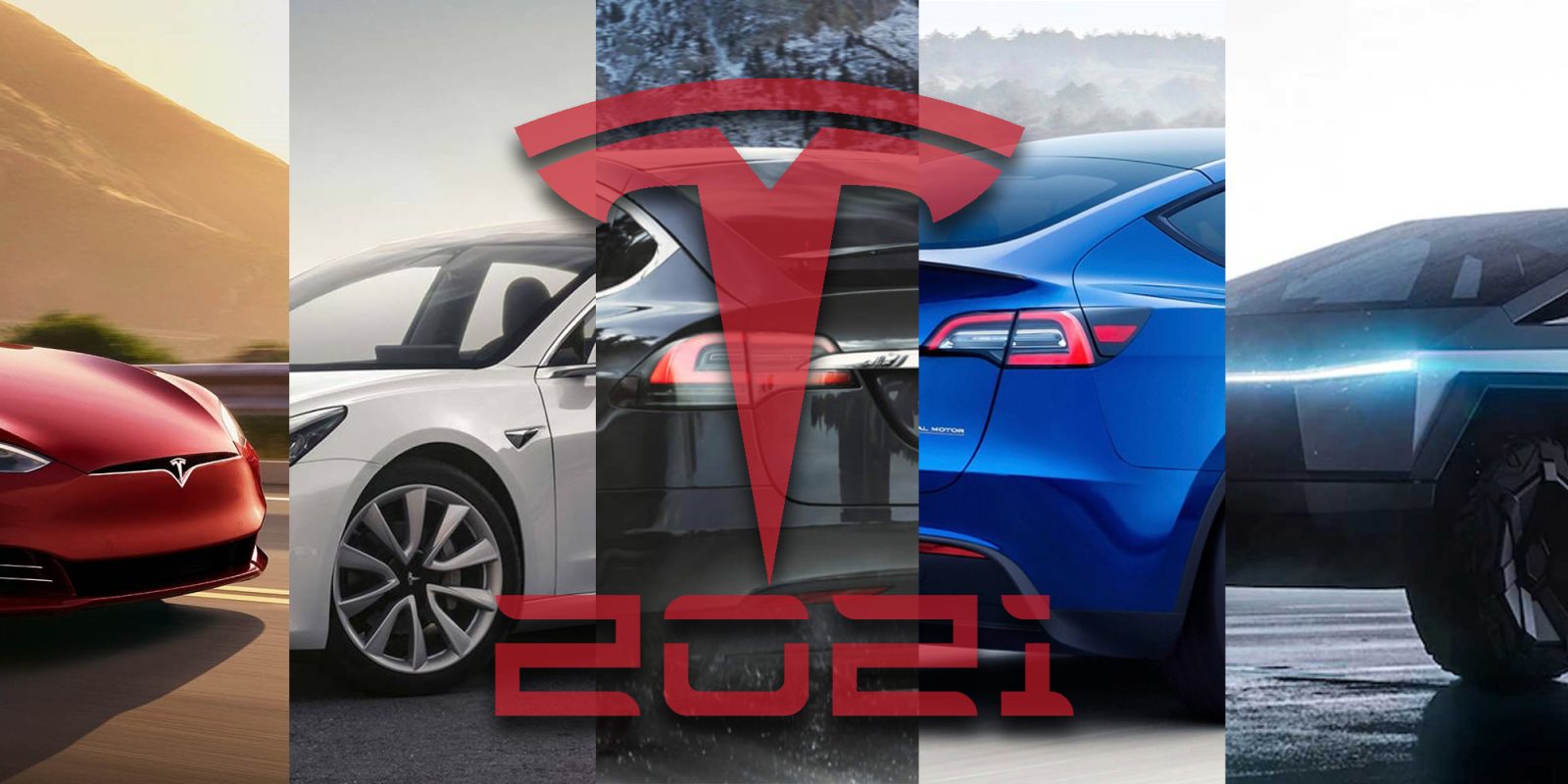 As 2020 comes to a much-celebrated wrap, the Tesla community is looking toward 2021 with high hopes. As the current golden child of electric vehicle manufacturing, Tesla looks to continue its reign and scale its ever-growing fleet. Below is a compilation of what Tesla’s 2021 models include and what customers can expect when their 2021 EV is delivered to their driveway.

As the automaker’s best selling EV, Tesla’s Model 3 has received a plethora of improvements inside and out for its 2021 version. As we reported in October, Tesla launched a refresh for the Model 3 on its website revealing all the new bells and whistles to come. Let’s start with the exterior.

The first thing Tesla fans might notice on the 2021 Model 3 is the decision to “chrome delete” the trim which is essentially wrapping all the chrome elements like the door handles and around the windows.

Additionally, Tesla added 20″ Überturbine wheels as an upgrade option for its Performance trim as well as upgraded 18″ and 19″ options for the other two trims. Aside from that, customers can expect to utilize a new power-operated trunk and (ideally) enjoy beautiful roadside vistas through double-paned windows.

Of course aesthetics are important for the look and style of an EV, but it’s what’s under the… floor that matters most! 2021 brings range improvements to all three drivetrains of the Model 3. The Tesla Model 3 Standard Range Plus with RWD jumps from a 250 mile EPA estimated range in 2020 to 263 miles. The speed focused Tesla Model 3 Performance option saw a 16-mile range increase to 315, up from 299 miles last year. Tesla’s Model 3 Long Range dual motor however, saw the largest increase in range, expanding from 323 miles to 353 miles for 2021.

The source of these improvements to range is largely due to Tesla switching its own designed heat pump into the 2021 Model 3 refresh. The more efficient heat pump was first introduced in this year’s Model Y. Furthermore, Electrek recently reported that Tesla’s latest software update 2020.48.12 comes with a varying range upgrade:

While Tesla is frequently delivering better efficiency through software updates, it is not to be confused with changes to the displayed range.

In this case, it appears to be a combination of both where Tesla is enabling more range while also better adapting the displayed range to the new battery capacity.

Also, the displayed range can be affected by several different factors and be different from car to car.

Lastly, all three options have seen an increase in acceleration traveling from 0-60 mph. The Long Range Model 3 currently sits at 4.2 seconds while the Performance dual motor hit 0-60 in a respectable 3.1 seconds.

As mentioned above, many of the upgrades to the 2021 Model 3 were already present on Tesla’s newest EV, the Model Y, which the automaker began delivering this past March. This should come as little surprise, as these two models are Tesla’s newest EVs and share a lot of the same parts. Since upgrading the Model 3, Tesla has also hit refresh on its website for the 2021 Tesla Model Y including a few tweaks to its youngest EV.

Back in November, Electrek got eyes on a recently delivered Model Y and was able to confirm a few updates. The images revealed auto-dimming mirrors, laminated window glass, and metal scrolls on the steering wheel. Furthermore, the new Model Y came with a USB port in the glovebox complete with a Tesla branded storage device to save data for features like Sentry mode or a TeslaCam.

One last feature customers can continue to look forward to is a seven seat interior option. CEO Elon Musk publicly confided that the third row of seats couldn’t be completed in time for the Model Y’s initial launch, and has since punted a couple more times about when customers might be able to snag those two additional seats.

After that, Musk stated that deliveries of the seven seat Model Y would begin in early December. Now Tesla has updated its website, finally listing the $3,000 seven seat option as available on two of its trims. The third row is currently an available option on the new Standard Range RWD and Long Range Model Y, but not the Performance trim yet.

As Tesla’s longest produced EV, the Model S is renowned for its one-two punch of luxury vehicle-esque design and fierce performance. Tesla’s focus on the latter for its most recent Model S trims has helped make this EV sedan downright ruthless.

Interestingly, the previous Model S Long Range with 402 miles of range had a combined 117 MPGe rating (City MPGe:121 – Highway MPGe:112) and the new Monroney sticker shows that the efficiency went down. It now shows a combined 116 MPGe rating (City MPGe:119 – Highway MPGe:113). Tesla improved the efficiency on the highway, but it went down for city driving. Normally, if the efficiency goes down, but the range goes up, it means that Tesla increased the energy capacity of the battery – though we can’t confirm that for now.

Tesla’s website still lists the EPA estimated range of the Model S Long Range Plus at 402 miles, but this will be something to keep an eye on going into 2021. Apart from increases to range, the Model S Performance drivetrain now boasts a 0-60 mph acceleration time of 2.3 seconds according to Tesla. That would be quite impressive under any other circumstances if it weren’t for Tesla’s announcement of its new “Plaid” powertrain last September.

Set to literally and figuratively “burn rubber” in late 2021, Tesla’s Model S “Plaid” offers tri-motor all wheel drive (AWD) and is anticipated to be an absolute beast. According to Tesla, the Plaid Model S can fire from 0-60 mph in less than 2 seconds, putting it in contention as the fastest production vehicle on the planet.

In addition to a top speed of 200 mph, this high-performance Model S offers an EPA estimated 520 mile range on a single charge. That being said, at a lofty price tag (more on that in our pricing roundup), don’t anticipate to see too many Plaid Model S’ on the road. When they do start to deliver however, they’re sure to scorch a trail out the back end of 2021.

Tesla also recently announced it will be shutting down its Model S and Model X production lines for nearly three weeks starting Christmas Eve 2020. This news supports previous reports we from us about a possible major interior design refresh. This was followed by a recently leaked photo that shows a potential new interior refresh.

There has been no mention of a refresh from Tesla’s end yet, but this pause in production is longer than usual during this time of year and leaves plenty of room for speculation as to what’s to come.

Not to be left out, Tesla’s largest EV Model X has also seen some upgrades to its most recent version. Back in October, a few Tesla customers started receiving Model X deliveries with 2021 VIN numbers whose Monroney sticker showed a significant range increase.

Since then, Tesla has shown its hand and has updated its website to reflect a mile range of 371 miles on its Model X Long Range Plus. This stat is up from 351 miles previously. The Tesla Model X Performance trim offers just 30 miles less range at 341 miles per charge, but claims to travel from 0-60 mph in 2.6 seconds in “ludicrous mode.” For perspective, that’s a one-tenth of a second decrease from its previous version.

The Model X has arguably had the least exciting list of overhauls for 2021 (so far). As Tesla’s second longest running EV in production, trust that if Tesla has in fact decided it’s time for a refresh, it will do all it can to maintain the caliber of space and performance the Model X is renowned for. As mentioned, the Model S and Model X production lines are shutting down in late 2020 for an extended period, which could point to some major upgrades on the horizon.

For starters, the Cybertruck itself is new to 2021. After making its glass-shattering debut in 2019, much anticipation has surrounded Tesla’s venture into the electric pickup truck game. This exoskeleton on wheels is set to seat six, tow up to 14,000 pounds (with the tri-motor drivetrain) and will come in three distinct configurations.

With production on the dual and tri-motor all wheel drive (AWD) options scheduled to begin in late 2021, customers might be able to roll out in their new cold-pressed, stainless-steel Cybertruck before next year’s final curtain call. For those interested in the more affordable single-motor RWD option, you’ll have to wait until late 2022.

It’s not 2021 quite yet, but Tesla has already refreshed its website to showcase its 2021 models and our own reporting has uncovered many changes large and small to look out for. Now the loyal masses can stop speculating and start to truly analyze what the next calendar year holds for new EV owners. Are you planning to pick up a Tesla in 2021? Let us know in the comments.