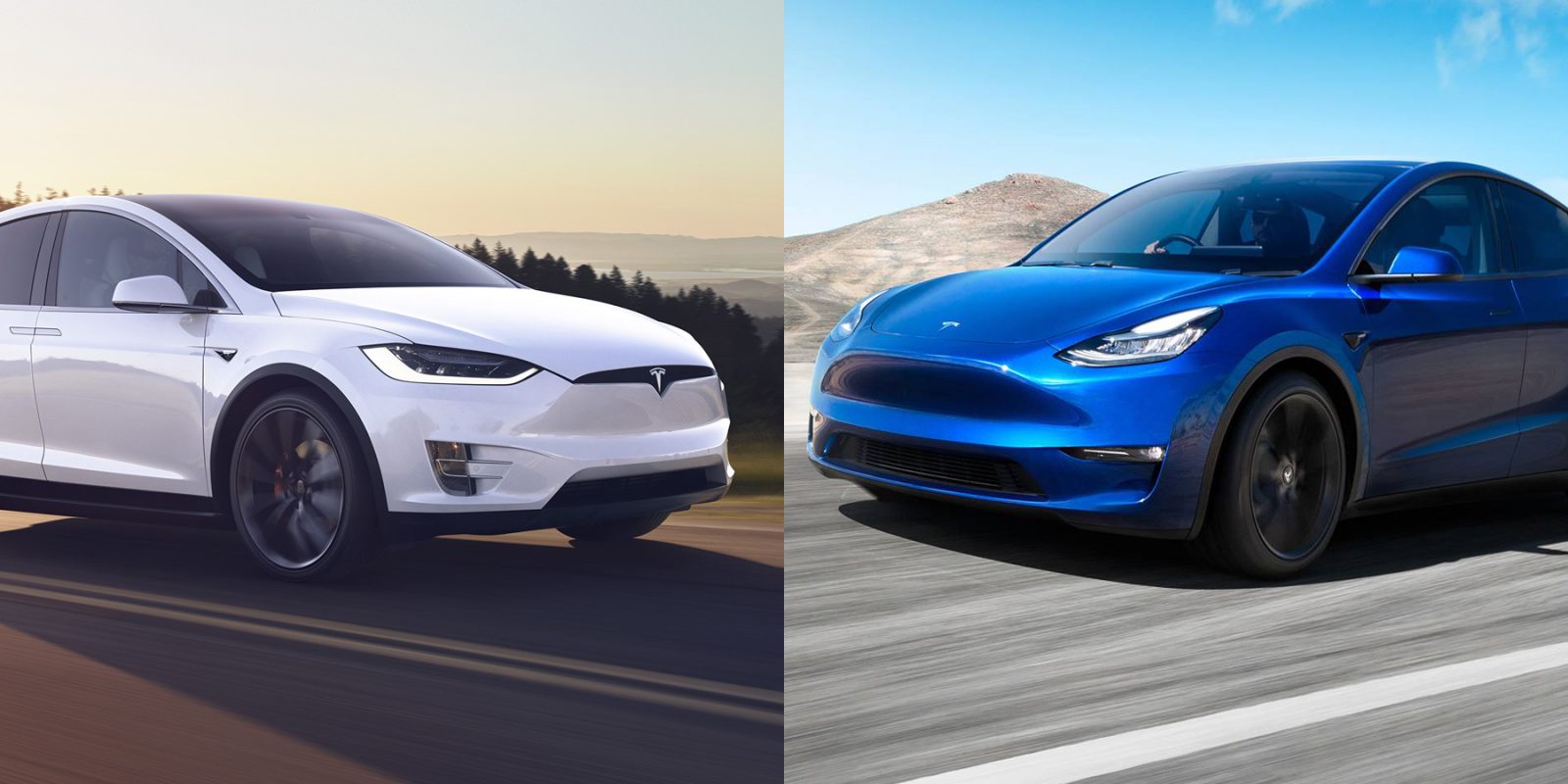 In its quest to offer an electric vehicle (EV) option to suit everyone on the planet, Tesla has expanded the size and scope of its carbon-conscious repertoire over the past 17 years. Tesla currently manufactures two sport utility options – the mid-sized offensive lineman of the Tesla family, the Model X, and the new(er) crossover kid on the block Model Y. Below is a side-by-side matchup of both Teslas to help you decipher which option may be better for you.

What is Tesla Model X?

While the Model X was originally unveiled in 2012, its first deliveries were not until the fall of 2015 due to production delays, particularly on its distinct Falcon Wing doors.

Shortly thereafter, the Model X quickly ranked as one of the top-selling plug-in EVs worldwide, although sales have since staggered a bit. This is due to Tesla’s release of two smaller and less expensive EVs in the Model 3 sedan, and the X’s brand new counterpart, the Model Y.

Previously, Tesla announced it would be conducting an extended shutdown of the assembly lines of its Model S and Model X EVs into the new year. Electrek’s own Fred Lambert had some interesting insight:

It’s not unusual for Tesla to shut down production lines during the holidays, but this 18-day shutdown is longer than usual and not the same as Model 3 and Model Y production…

Compared to Tesla’s other EVs in the fleet, the Model X saw minimal upgrades in 2020. With that said, Tesla did finally announce a 2021 refresh to the Model X SUV and Model S sedan.

What is Tesla Model Y?

The Model Y, which was first delivered in March 2020, remains Tesla’s newest EV to roll off the assembly lines worldwide. Although it is a smaller and more streamlined version of the veteran Model X, the Model Y shares more of its mechanical makeup with the more recent Model 3 sedan.

A refresh on the Model Y for 2021 was minimal since the EV hasn’t even had a first birthday yet. However, this past fall, Electrek did discover a recently delivered Model Y and was able to confirm a few upgrades.

Images of the new model revealed auto-dimming mirrors, laminated window glass, and metal scrolls on the steering wheel. Additionally, the new Model Y came with a USB port in the glovebox, complete with a Tesla branded storage device to save data for features like Sentry mode or a TeslaCam.

One last feature customers had to continually wait for was a seven-seat interior. While the third row seats couldn’t be completed in time for the Model Y’s initial launch, CEO Elon Musk stated that deliveries would begin in early December of 2020.

December came and went, but Tesla finally added the seven-seat option to its purchase page in 2021. It is currently only available on the Long Range trim however, not the Performance Model Y.

While these Tesla vehicles offer the most cargo room in the current lineup, they also sport more than adequate performance specs. Sure, they may not be quite as quick off the line as their sedan counterparts, but both the Model X and Model Y EVs pack an electric punch in range and speed.

Here’s how they size up, side by side.

We will start with the older of our two Teslas, the Model X. Currently available in one dual motor, all-wheel drive (AWD) version, and a new tri motor Plaid powertrain, the Model X has much to offer. The Model X Long Range prioritizes mileage on top of 91 cubic feet of cargo space.

At a 360-mile range, this Tesla lost 11 miles compared to its previous version. However, it can still reach a top speed of 149 mph and hit an acceleration of 0-60 mph in 3.8 seconds. If you upgrade to the 22″ turbine wheels, you can squeeze out more speed of 155 mph, but you’ll lose ten miles of range in the process.

The Performance trim Model X has been dropped in return for a new tri motor Plaid trim. The Plaid Model X can travel an EPA-estimated 340 miles, top out its speed at 149 mph, and can zoom 0-60 mph in 2.5 seconds.

Again, if you crave more speed, the 22″ wheel upgrade can get the Model X Plaid up to 163 mph, at the sacrifice of ten miles of range.

This may be Tesla’s largest and heaviest EV so far, but it can still hang on the track for sure.

The Model Y sacrifices a bit of performance to offer better pricing for customers (see our pricing breakdown below). With that said, the Model Y still has plenty to offer drivers in speed and range.

Like the Model X, the Model Y offers two versions with dual motor AWD in a Long Range or Performance trim. The Long Range trim can travel an EPA-estimated 326 miles on a single charge while reaching a modest top speed of 135 mph.

Additionally, it can travel from 0-60 mph in 4.8 seconds – an entire second slower than the Long Range Model X with 20 mph less top speed.

Tesla’s Performance Model Y offers less range at 303 miles per charge, but can hit a top speed of 155 mph. This trim can travel 0-60 mph in 3.5 seconds. So it can beat the Long Range Model X in a race, the Model X Plaid would smoke it by a whole second.

Overall, the Model X offers more range, top speed, and acceleration for either trim when compared to the Model Y.

Last year, Tesla briefly launched a Standard Range RWD version of the Model Y on its website. This single motor option could travel 244 miles on a single charge, hit a top speed of 135 mph, and travel 0-60 mph in 5.3 seconds.

Almost as quickly as it was implemented however, the Standard Range Model Y suddenly disappeared from Tesla’s website configurator. Electrek later reported that the RWD Model Y will instead remain available as an “off menu” item, because Musk was not satisfied with its range. Its future remains uncertain, although the Standard Range recently received its official EPA rating as one of the most efficient EVs in the world.

While both Tesla vehicles could be classified as SUVs, they share more features with their respective assembly line sedan counterparts i.e., the Model S and Model 3.

There are certainly similarities between the Model X and Model Y too. For example, both come with premium audio systems, LED fog lamps, power folding, auto dimming, heated side mirrors, and custom driver profiles.

Both Tesla vehicles also come with a tow hitch option, although it currently comes standard on all new Model Xs. As for the Model Y, you can add a class II steel tow bar and hitch, capable of towing up to 3,500 lbs for an extra $1,000.

The two Tesla vehicles are similar yet different in other ways, too. With its new refresh, the Model X has adapted the completely glass roof from the Model Y. This offers ultraviolet and infrared protection for passengers.

While the Model Y comes with all-black interior included, the Model X ups the ante with carbon fiber included on top of the all black trim.

The Model X includes futuristic-looking yoke steering, and has turned its 17-inch touchscreen (2 inches larger than the Model Y) horizontal. The Model Y features a center console with storage, four USB ports, and docking for two smartphones. Not to be outdone, the Model X refresh now includes a second touchscreen for its rear passengers.

Although the Model X is the older Tesla, it still has a couple features not yet available in the Model Y. For example, the larger EV features tools to fight the elements such as heated seats for each passenger, heated steering wheel, wiper blade defrosters, and washer nozzle heaters.

The Model Y also has new tools to perform in colder climates as well, as it was the first of Tesla’s fleet to feature the automaker’s self-designed heat pump, offering extended range. It’s important to note that the heat pump was adapted to the new Model X as well, and is now present in all four of Tesla’s current vehicles.

All in all, both Tesla vehicles are loaded with features to offer both safety and comfort while riding. It’s a bit of a toss-up as to which model is better. Both options have plenty to offer without even getting to the add-ons, but the Model X certainly offers more room.

One major way the Model X and Model Y vary is in the checkout line. As a customer, you could most likely find the features or powertrain to suit your needs in either model, but when it comes to final price, that might end up being the deciding factor.

The prices below are listed to offer the lowest and most expensive versions of each model, from the standard bare-bones EV to all available features added. This way, you will have a good idea of the very minimum or maximum you would need to spend on your ideal Tesla.

Note that these prices are current at the date of this post, and we will update them for you as they change. All prices do not include the additional $1,200 for destination and documentation fees or any state or federal tax rebates.

Let’s begin with the Model Y. As the second-most affordable Tesla option to date, both options for the Model Y will be less expensive than the Model X.

The Performance Model Y starts at $60,990 and expands upwards to $74,990 when fully loaded. This version includes all the same added features in addition to standard 21’’ Überturbine Wheels.

To compare how these prices stack up against other Teslas like the cheapest Model 3, check out our Tesla pricing guide.

Both standard versions of the Model X and Model S saw $5,000 price bumps in July of 2021. That being said, the less expensive Model X Long Range trim, including white paint and zero added features starts at $94,990.

If you were to add all the most expensive add-ons such as red paint, 22″ Turbine Wheels, and FSD capabilities, the price can reach $121,490.

This top-end price includes the most expensive six-seat interior with captain’s chairs for $6,500. If you prefer the seven-seat row, that option will cost $3,000 less. Standard five seats? That will still cost $114,990.

Which is better, Tesla Model X or Model Y?

That’s difficult to determine and certainly subjective, depending on who is buying. The Model X offers more cargo room, mile range, speed, and acceleration, but for $43,000 more than the Model Y… minimum.

The Model Y is complete with new and exciting features, but most of which have now been adapted into the newly refreshed Model X anyways.

Price is the biggest difference here. Even at its most expensive version of the Performance trim, the Tesla Model Y remains $20,000 less than a bare-bones Model X Long Range and more than $45,000 less than a standard Model X Plaid.

All in all, the Tesla Model X offers more of pretty much everything, but at a higher price while the Model Y offers more value in purchase price, leaving room for more additional features.