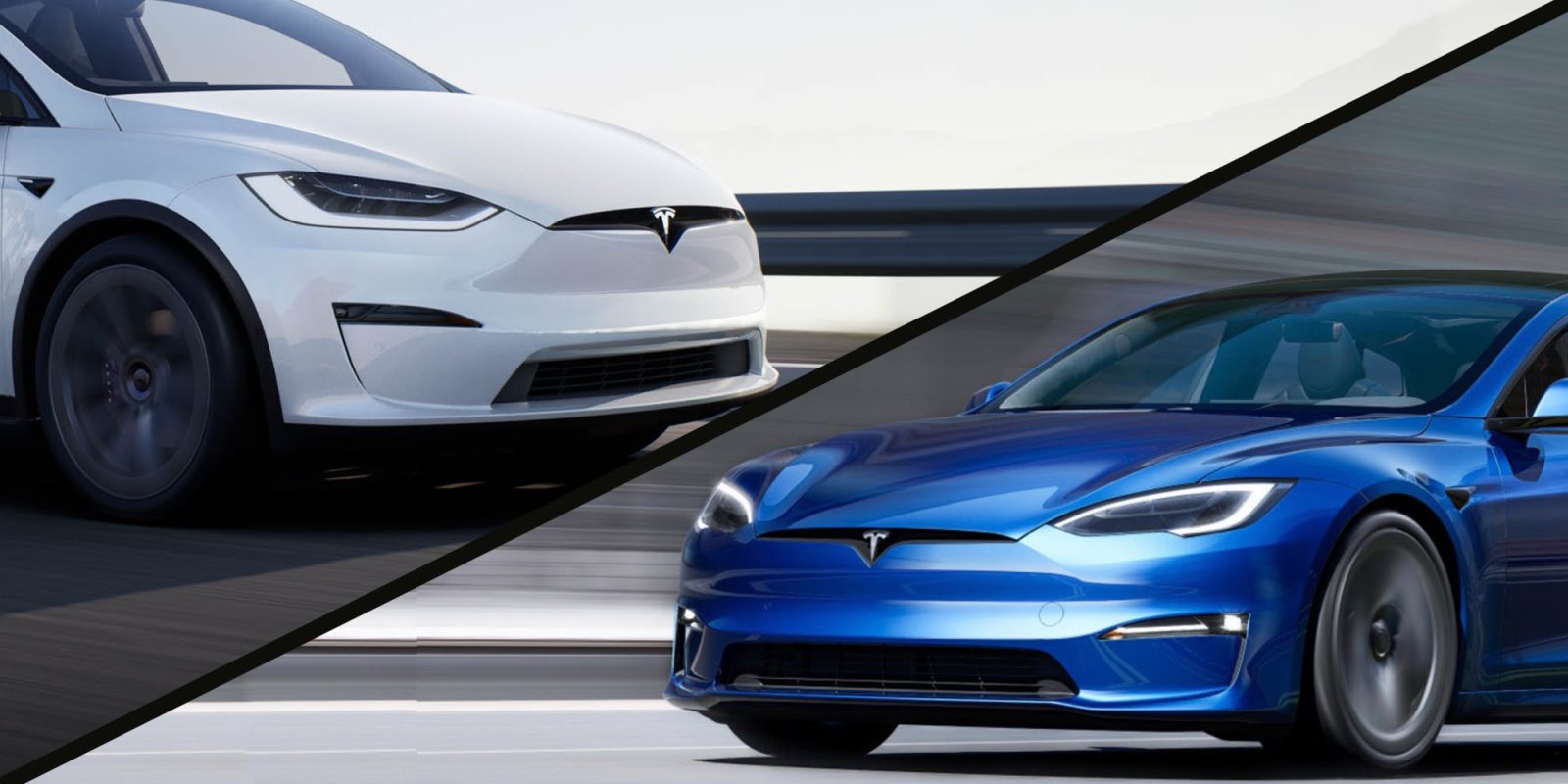 Of the four electric vehicles currently available in Tesla’s fleet, its Model S and Model X sit as the two longest in production. At a higher price point than Tesla’s two newer models, these veteran EVs offer a combination of the efficiency, performance, and luxury that originally put Tesla on the map. Below is a thorough comparison of Tesla’s Model S sedan vs. its Model X mid-sized SUV.

What is the Tesla Model S?

The Model S sedan is Tesla’s longest running EV in production to date. It made its official debut in 2012 after years as a prototype for the automaker. Since then, the sporty EV has held a reign as the best selling plug-in electric in both 2015 and 2016.

Sales of the veteran Tesla have slowed since the launch of the automaker’s more cost-friendly Model 3 and Model Y EVs, but the Model S still sits as a premiere sedan that offers a variety of luxury and performance for those who can afford it.

Especially following its latest refresh and the introduction of the Plaid powertrain.

What is Tesla Model X?

Tesla describes its Model X EV as a “mid-sized SUV” that currently sits as the automaker’s second longest running model on its shared assembly lines with the Model S. The two EVs also share over a quarter of the same parts although they look quite different in design.

Originally unveiled in 2012, first deliveries of the Model X didn’t begun until 2015 due to a focus on the Model S production followed by a slew of delays.

While neither of these two Tesla models saw arguably overdue overhauls to their design in 2020, the new year said otherwise. In late 2020, Tesla had announced a complete production shutdown for both models through the holidays and into the new year. This move has led toward speculation about a possible refresh of both EVs. Finally, Tesla came forth and confirmed a refresh was in fact coming for both veteran models.

As the two higher end EVs currently available from Tesla, both the Model S and Model X have plenty to offer drivers under their floor. Both models now come with dual motor or tri-motor AWD Plaid (AWD) options to choose from. Let’s begin with the elder, Tesla’s Model S.

The least expensive version of the Model S sedan is still a powerhouse of EV achievement. The current Long Range trim can travel 405 miles on a single charge, hit a top speed of 155 mph, and can fire from 0-60 mph in 3.1 seconds.

Previously, the Model S came in a Performance trim focused on speed, but that was dropped to make way for the upcoming Plaid powertrain.

In the fall of 2020, Tesla confirmed an even higher end version of its banner EV with the unveiling of its tri motor “Plaid” powertrain. In 2021, Tesla surprised customers with the announcement of the Plaid+ powertrain. This version was advertised to offer the same speed as its Plaid counterpart, but with a 520+ mile range on a single charge.

While tons of Tesla disciples put in their reservations for the Plaid+, the automaker scrapped the entire trim altogether as Elon Musk declared that consumers don’t need more than 400 miles of range, and the regular Plaid is “just too good.”

The Plaid was originally scheduled to arrive in late 2021, but Plaid has sinced moved around quite a bit on the calendar. Currently, the Plaid Model is is scheduled to deliver in September or October, although the Long Range Model S has since been pushed to February or March of 2022.

Nevertheless, the Plaid specs are still quite staggering as the new EV has already shattered some track records.

The Plaid Model S has ended up with a mere 396 EPA estimated range compared to the 520+ miles originally advertised on the Plaid+. That being said, it can still hit a top speed of 200 mph and travel 0-60 mph in 1.99 seconds.

Here’s the latest to get you up to speed on the whole debacle:

Similar to the Model S before Tesla’s Plaid announcement, the Model X came in two different trims focused on either range or speed. With the new refresh however, the Model X is now available in either dual motor AWD or a tri motor Plaid option.

The dual motor Model X Long Range can travel 360 miles on a single charge (a slight downgrade of 11 miles from the previous Long Range Plus trim). I can however, hit a top speed of 155 mph… if you upgrade to the 22″ Turbine Wheels for an additional $5,500.

It’s 0-60 mph acceleration of 3.8 seconds loses its head to head battle with the Long Range Model S, but is still an improvement of .6 seconds compared to its previous version.

Much like the Model S, Tesla has dropped the Performance trim in favor of a tri motor Model X Plaid. This version can travel an EPA estimated 340 miles and reach a top speed of 163 mph with the Turbine Wheels upgrade. The Model X Plaid can also travel 0-60 mph in 2.5 seconds.

Truthfully, this feels more like a rebranding than anything as the the Plaid powertrain offers nearly the same specs as the previous Performance trim. Plaid loses one mile of estimated range in exchange for .1 seconds saved on its 0-60. The top speed of 163 mph remains the same.

After reading above, it’s clear that either Tesla option will offer you a drivetrain performance you’re looking for to get you where you need to go. Yes, it’s obvious that one option is a five seat sedan, while the other is a mid-size SUV.

There are more subtle differences between the two that may end up being the deciding factor in your EV search. Here are a few comparisons of the additional features available on our two Tesla models.

First let’s compare what these two Teslas have in common. Both come with standard black interior included, although the X comes with carbon fiber trim while the Model S has Ebony Wood Decor. This surrounds new yoke steering, offering a (mandatory) futuristic look for drivers.

Both refreshes have also seen new horizontal touchscreen displays, as well as a second display in the back seat. Both models now feature Tesla’s heat pump and chrome delete trim.

Lastly, both models still come equipped with a HEPA air filtration system to prevent viruses and bacteria from entering the cabin.

Differences between the Model X and Model S

The first feature the Model X can boast over its predecessor is its doors. The current Model X comes with self presenting and closing front doors, as well as Falcon Wing rear doors. The latter provide easier access to the second and possible third row seats of the interior, another feature available solely on the Model X and Model Y SUV.

In addition to the extra seats, the Model X hosts a best in its class cargo space of 88 cubic feet. Its cargo space is quite a bit larger than the 28 cubic feet of extra room in the Tesla Model S. The Model X also comes with a tow hitch standard, capable of pulling up to 5,000 lbs.

The best feature on the Model S is its tri-motor Plaid option, offering the very best in range and speed.

Overall, the Model S and Model X share many of the same included features sure to offer any driver comfort and intuitive functions. That being said, the Model X has more to offer in terms of additional features and upgrades, all inside and out of a much larger interior.

Of course performance, comfort, and an interior loaded with features are all important when choosing an EV like a Tesla. More often than not however, you quickly find yourself wondering, how much does a Tesla cost?

The bottom line may be particularly important when comparing a Model S to a Model X since these two EVs are hands down the most expensive options in Tesla’s current fleet.

Below is a detailed breakdown of each trim to offer the full spectrum of how little or how much each of these Teslas can cost.

Please note: None of the prices include destination or documentation fees, taxes, or federal tax rebates.

Starting with the Model X Long Range trim, the most basic model including white paint and zero added features starts at $94,990. If you were to add all the most expensive additional features including red paint, custom interior, 22″ Turbine Wheels, and full self-driving capabilities (FSD) the price jumps to $121,490.

Note that this price includes the six-seat interior (most expensive option) for $6,500. The seven-seat option would be $3,000 less, while the five seat interior comes standard.

The new Plaid trim picks up just above where the high end Long Range version left off at $119,990 and can go as high as $146,490 including the same wheels and six-seat, captain’s chair interior.

Compared to the Model X, Tesla’s Model S starts at a slightly lower price and can quickly hockey stick upward as you add more performance.

Starting with the Long Range trim, this Model S starts at a purchase price of $84,990 completely standard. If you were to add each and every additional feature such as the red paint, 21″ Arachnid Wheels, custom interior, and FSD capabilities for an additional $10,000, you’re looking at a price of $98,990. We’re just getting started on price tags too, we haven’t gotten to the Plaid yet.

For a brand new, white Plaid Model S with only the included features, you’re looking at $129,990 off the bat. Adding all available features including the add-ons above and 21″ Arachnid Wheels, the Plaid Model S can cost $148,990.

That’s really only $2,000 more than the fully-loaded Model X Plaid. To offer additional texture, you could use that money to purchase three brand new, Model 3 Standard Range Plus Teslas and still have nearly $28,000 leftover for upgrades.

Which to choose: Tesla Model S or the Model X?

Overall, these are Tesla’s longest produced vehicles for a reason. Both helped make the automaker a household name, and provide the luxury and performance many other EVs have yet to match.

In terms of overall performance, the Model S in any trim stands on its own. Head to head, the Model S won on paper in nearly every category except price and cargo space, offering more performance value for your dollar.

That being said, the Model X SUV sits as a close second, especially after this latest refresh. It offers impressive performance on a larger and heavier vehicle.

If your preference is performance (particularly speed), the Model S is the better bet. However, if you prefer to get behind the wheel of an EV that can haul a lot of cargo and/or passengers while still providing great range and speed, the Model X is a no brainer.