The Rivian R1T is Electrek’s 2021 vehicle of the year 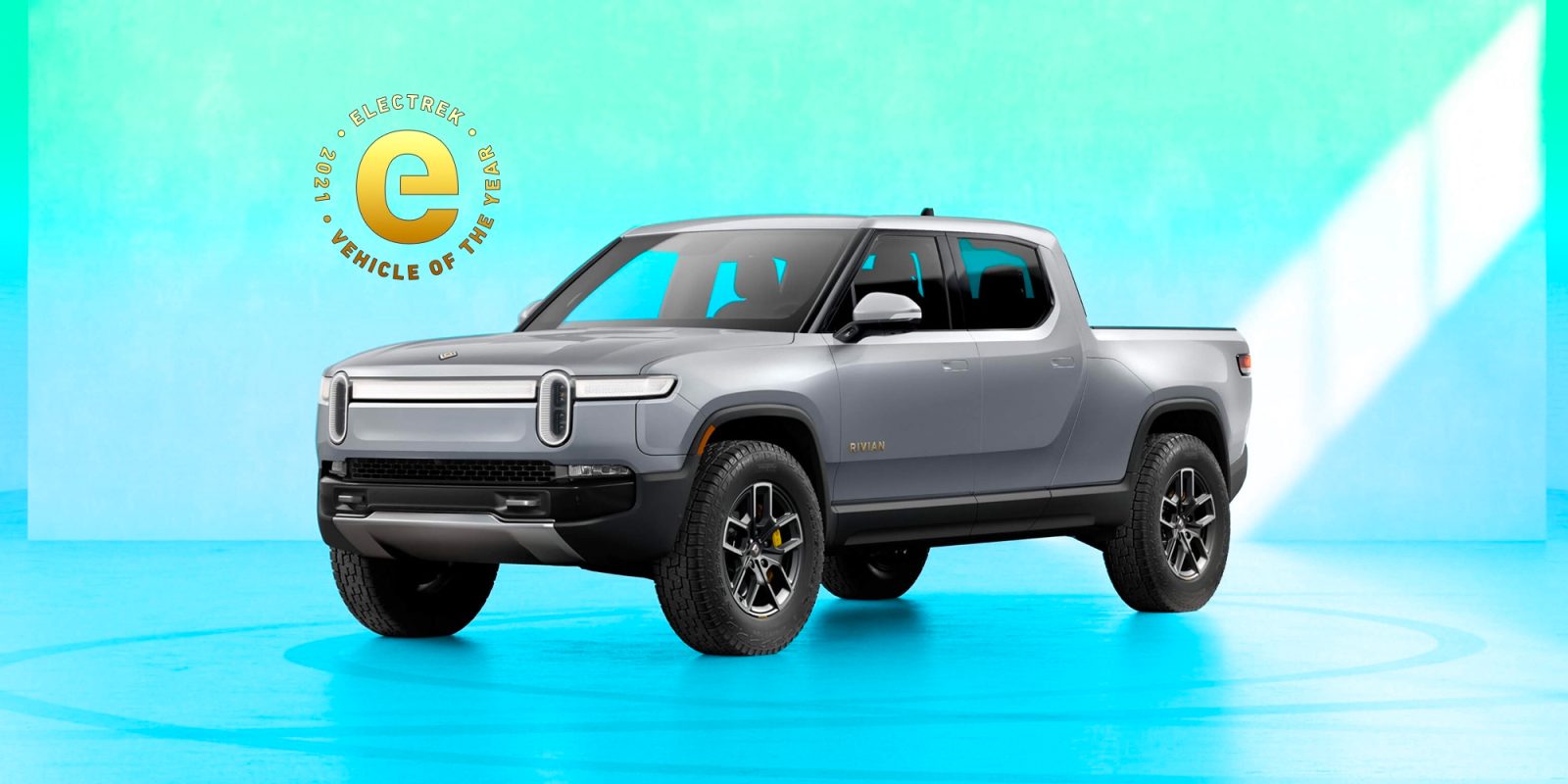 This pickup truck has everything – faster than most sports cars, a roomy interior with lots of storage and extras, and it can go off-road where no other production vehicle can go. It’s the first time electrification has hit the off-road pickup in a meaningful way, and it proves why electric is king both on-road and off.

Last year’s Electrek vehicle of the year was the Juiced HyperScorpion electric moped, so we’re not just considering cars and trucks at the Electrek editorial virtual office here. During the pandemic, more and more people were turning to bikes for their commutes, and the e-moped form factor was proving popular and has since exploded. A year later, there’s now 100 different moped-style e-bikes, so we caught the trend early.

But you don’t have to be a trend watcher to know that electric pickup trucks are about to explode in popularity. With Ford’s F-150 Lightning unable to meet demand by 2025, and Tesla Cybertruck orders removed from the website and deliveries being pushed to late 2022 at the earliest, supply is looking a little bleak. We’ll find out more about GM’s intentions with the Silverado/GMC lineup at CES, but the Hummer EV is just getting out the door, and we’ve not had the opportunity to sit in a working $130,000 production-ready vehicle.

Meanwhile, startup Rivian has kicked off deliveries of its $70,000 R1T (around 1,000 will be made by the end of the year) and expects to ramp up next year. Earlier this year we even had the chance to drive a “production example” up a mountain in Colorado.

But before we get too far into the Rivian R1T, let’s check out the rest of the field.

The electric bicycle industry’s meteoric growth this year has proven that e-bikes are effective solutions to putting commuters in (or on) electric vehicles. Beyond last year’s e-bike of the year from Juiced, there have been some notable launches this year.

Industry leader Rad Power Bikes launched a duo of new premium e-bikes known as the commuter-spec RadCity 5 Plus and fat tire RadRover 6 Plus. The 20 mph (32 km/h) e-bikes marked a complete redesign for the company, with a shift toward higher-end components like hydraulic disc brakes, frame-integrated batteries, higher torque motors for better hill climbing, and a wide range of new accessories such as higher-power USB chargers to improve the e-biking experience. Priced at $1,799 and $1,999, respectively, the new models brought higher-end components into the value e-bike market and could help push other manufacturers to do the same.

On the budget end of the spectrum, relatively young e-bike brand Lectric eBikes unveiled their second model in just two and a half years of operations: The 28 mph (45 km/h) Lectric XP 2.0. The nascent brand became the fastest e-bike company to reach 100,000 units sold this month, riding high on huge excitement generated from the Lectric XP 2.0 launch. The new bike retained the same folding fat tire design that proved popular with the original, yet added high-quality hydraulic suspension, more nimble tires, a redesigned frame with improved comfort, and the ability to mount large front and rear racks for cargo duty. The $949 price of the bike kept it in the budget category, but demonstrated that good parts and high performance could still be had for a decent price.

Pandemic chip shortages and delayed schedules dominated the year, so a lot of what we thought was coming either came in late, in low numbers, or not at all.

This was still a breakout year for EVs with a number of vehicles that could have won in previous years. Although not meaningfully launched yet in the US, the Hyundai Ioniq 5/Kia EV 6/Genesis GV60 E-GMP platform siblings are all impressive in their own right. With 800V hyper fast and bi-directional charging, these vehicles showcase what the future of EVs entails. There’s also the gorgeous design inside and out that Hyundai isn’t yet known for. I did get to spend some time at IAA in Germany driving an Ioniq 5 (and Scooter Doll got a first drive) and was impressed with just about everything except the acceleration on the 2WD version. We’ll reserve judgment for 2022, but I’d opt for the AWD version that has more power, just like the VW ID.4, which also is getting improvements, including a built-in Chattanooga AWD variant in 2022.

Lucid also finally got some of their Airs off the assembly line and frankly knocked it way out of the park with their absurd 500+ mile range and over 1000HP drivetrains. CEO Peter Rawlinson notched his second Motor Trend Car of the Year award (his first being the 2013 Tesla Model S) with the Air, and frankly, its efficiency numbers are super impressive for a car of its size.

Tesla also didn’t disappoint, delivering limited numbers of its Plaid Model S and X that reach incredible speeds at close to two seconds from 0-60 and absurd quarter miles down well under 10 seconds. Both would have been production car records if Rimac’s limited run, $2M+ Nevara didn’t obliterate those records earlier this year. We’ve not yet had an official drive of either of these two vehicles, but look forward to an opportunity in 2022. Tesla’s FSD beta, growing and soon cross platform charging network, and Hertz Rental car fleet were also big events this year.

There were also some notable electric planes, trains, and even boats this year, but…

Rivian’s R1T is a game changer

The Electrek vehicle of the year is the one that moves the needle, and Rivian’s R1 truck and SUV platform are doing just that. Not since my 2012 Tesla Model S test drive have I been so enamored with a vehicle as I am with the Rivian R1T.

The Rivian R1T isn’t just an electric pickup truck, it’s the future of the pickup truck. Rivian executives brag about its ultra-low .3 coefficient of drag that is more slippery than many sports cars and gives the vehicle an impressive 314-mile range. How? The bottom is smooth and front grill doesn’t require massive cooling that an ICE pickup truck is built around. The rest of the vehicle was thoughtfully designed around eking out every last bit of efficiency from a pickup truck form factor.

Rivian thoughtfully has things like a built-in flashlight, portable bluetooth speaker, huge powered frunk space, four independent motors, and extra space all over the place including its huge gear tunnel that can hold an optional kitchen (yes, it even has the kitchen sink).

On the road, you can drop it into sport mode and it will blow away all but the fastest sport cars with a three-second 0-60. The next 30 miles are almost as quick, as we found out on our first ride. With not only four-wheel independent suspension, but independent motors, the handling is unbelievable.

Electrified off-road might be a bigger game changer than on-road?

If a pickup can’t deliver off-road, then it might as well be a tall car. Luckily, the Rivian R1T is astonishing on hills and crazy terrain as the R1T first drive adventure proved. We were in territory where unmodified production vehicles couldn’t and wouldn’t go. Once we got to 13,000 feet, the performance of the electric vehicle improved because of the thinner air, whereas ICE vehicle performance diminishes significantly. On the way down, instead of lighting up the brakes or the transmission by downshifting, the R1T regenerated a lot of the energy used getting up the mountain, guaranteeing us hours of additional drive time.

The four independent motors guaranteed that as long as one wheel had traction, we’d be moving along. The amount of torque and low center of gravity means that the wheel traction is the only thing that can slow the Rivian down. I’m told it would go up a 90-degree wall if the wheels would stick to it.

Add things like ability to wade in three-plus feet of water and a towing capacity of 7,700 lbs, and it supersedes anything that came before it. To top it all off, it’s quiet, so it disturbs the surroundings a lot less and connects the driver with nature all that much more.

I didn’t spend a lot of time talking about the interior during my review, but it has stuck with me since, maybe more than anything else. Equal parts form and function, there is tons of storage and phone-charging options everywhere. The panoramic roof makes the back feel even larger than it is and it staves off car sickness (in my case). The Meridian sound system is great. The wood and sustainable materials together with huge displays give information when needed and reminders of nature when not. The seats were comfortable and sporty. The views out the window are fantastic and it just feels great to drive.

Where it started / How it is going

The company started out building a coupe car in 2011, but as market shifts happened by the mid-2010s it focused development on adventure vehicles.

By early 2017, the company had completed its purchase of a former Mitsubishi facility in Normal, Illinois, to become its North American manufacturing hub

Rivian wowed us at the 2018 Los Angeles Auto Show, coming out of stealth mode with a working R1T electric pickup prototype. That followed years of stealth development that instead of trying to manufacture hype, Rivian spent time building out its team, factories, and prototypes.

I am stunned by the specs here. We are talking about a best-case scenario for an all-electric pickup truck. It looks like these guys have really figured out how to take advantage of an electric powertrain to get some great performance in a pickup truck package.

Rivian then signed up for an unimaginable adventure where the R1T prototypes stole the show in Apple’s Long Way Up series documenting a trip up to California from Patagonia on Harley Livewires. Against a gorgeous but chargerless backdrop, the Rivians gave us a preview of what an EV pickup could do in all manner of situations.

Downsides of the Rivian R1T

Yesterday, Rivian delivered its first earnings report since going public, and it had some forward-looking statements in the audio:

Perhaps the most important thing is something that CEO RJ Scaringe said at 41:15: “Every early Rivian customer becomes a sales representative for the company.”

That’s true for me as well. I placed an order for the R1S SUV variant of the R1T about halfway through our testing of the vehicles. I wish I had done so sooner and could get my hands on the Launch Edition (in case anyone out there has cold feet?!). We have a crazy dog that we don’t feel comfortable putting in the back (or gear tunnel!) of the R1T during our weekend trips to Vermont, so I opted for the SUV. And true to RJ’s words, I’ve sold a few friends on the vehicle as well.

How about you? Are you sold?

Editor’s note: I currently do not own any Rivian shares but have an R1S on order.