After almost a decade of operating in a certain level of stealth, Rivian Automotive is coming out in a big way today by unveiling its all-electric pickup truck: the Rivian R1T.

They are promising some unbelievable specs that would compete with any gas-powered pickup truck on the market.

Unlike other high-profile electric vehicle startups, Rivian mostly stayed in the shadows to develop its EV technology and prepare a plan to secure volume production of its vehicles.

They have invested millions in the plant in hope to eventually be able to produce hundreds of thousands of electric vehicles at the factory.

The Rivian R1T will be the first of those electric vehicles to make it to the market and they unveiled it today ahead of a launch event later tonight:

Like almost every other company making electric vehicles these days, Rivian adopted the “skateboard” platform, but it put its own twist on it and integrated 4 small (but powerful) electric motors:

Each motor has a 147 kW power capacity at the wheel and the total power output can be configured to different levels from 300 kW to 562 kW (input to gearbox).

They are talking about a charge rate of up to 160 kW at fast-charging stations and an 11-kW onboard charger for level 2 charging.

The rest of the specs are just as impressive if not more: 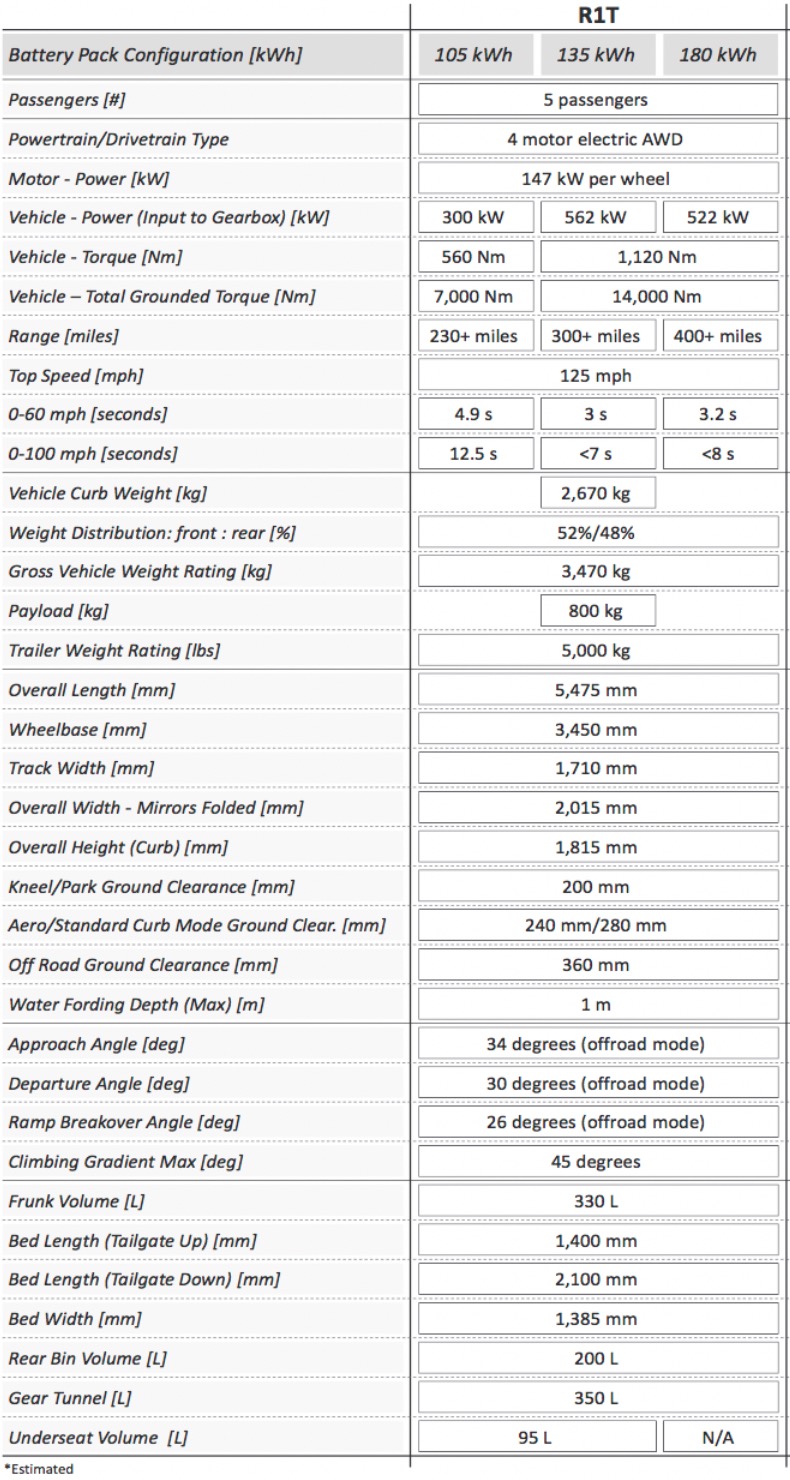 The utility features don’t stop at a payload capacity of 800 kg and a towing capacity of 5,000 kg, but the R1T is also equipped with a ton of features that will make it useful for people who actually use pickup trucks to take advantage of their capacity.

Rivian explained some of the features:

“The R1T’s lockable Gear Tunnel aft of the cab, which extends from one side of the vehicle to the other, provides more than 350 liters of space for hauling gear of any size, whether it be snowboards, golf bags or strollers. The gear tunnel doors also act as steps for loading items into the bed or on the roof, as well as seats perfect for lacing up hiking boots. The R1T has a watertight, integrated tonneau cover for the bed and in the rear beneath the bed floor is a 200-liter sealed bin that can also be used to store a full-size spare tire. The bed features three 110-volt outlets with more 400 watts available at each.”

Here are some images of those utility features:

Rivian also says that the R1T will launch with an extensive suite of sensors for autonomous driving on the highway:

“The R1T will launch with a robust hardware suite with multiple modalities including  camera, lidar, radar, ultrasonic and a high precision GPS coupled with high definition maps. This hardware enables “Level 3” (hands-off wheel and eyes off road) autonomy for highway operation. Beyond the highway Level 3, the vehicle will have a range of self-driving features focused on enabling active lifestyles.”

It’s not the only high-tech aspect of the electric pickup truck.

The company is also promising a fully upgradeable platform with over-the-air software updates.

They are talking about a digital experience and they certainly have the screen real estate for it:

Deliveries of the R1T are expected to begin in “late 2020”, according to the company.

They are taking a similar approach as Tesla with the Model 3 – meaning that the higher-end versions of the vehicle will be available first.

In this case, we are talking about the 180 kWh pack (400+ miles range) and 135 kWh pack, which Rivian says will be available at launch.

As for the base version with the 105 kWh pack (230+ miles range), they expect it to be available “within 12 months of the start of production.”

The Rivian R1T will start at $69,000 before incentives in the US and they are now taking refundable $1,000 deposit to place a reservation.

I am stunned by the specs here. We are talking about a best-case scenario for an all-electric pickup truck.

It looks like those guys have really figured out how to take advantage of an electric powertrain to get some great performance in a pickup truck package.

As for the design, I like everything except those headlights. They really bum me out because everything else is on point.

Maybe they look better in person and we are going to see the pickup live later today. I’ll report back after that with more of my thoughts and they might even get a reservation out of me if I like what I see in person.

Let us know what you think in the comment section below. If you have any specific questions about the truck, I can try to relay them when we meet with the company at the launch event tonight.