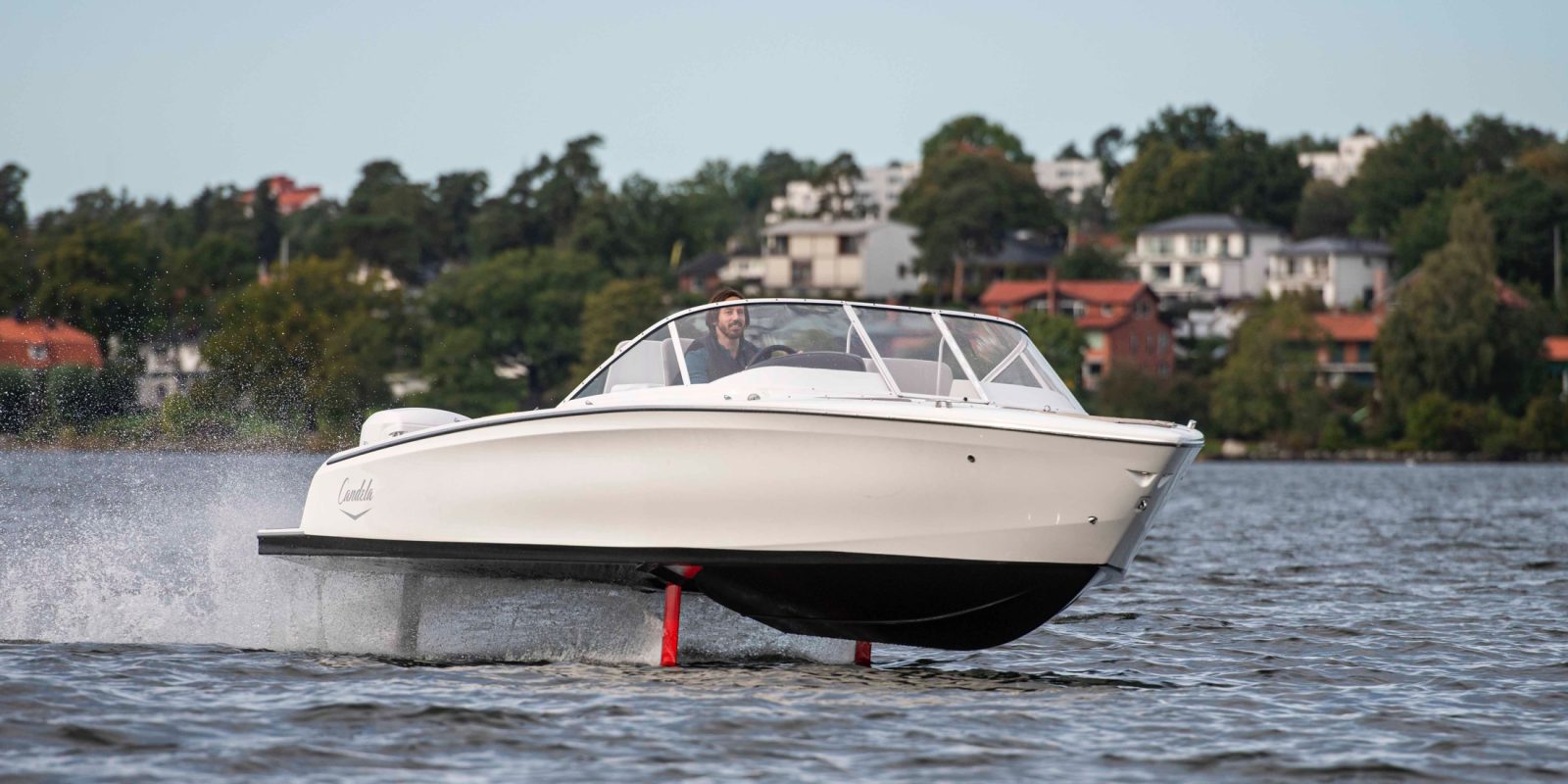 When I first began covering Candela and the company’s flying electric boats, I thought it was pretty cool tech that only a few people could ever dream of experiencing. Fast forward to a few days ago when I was flying above the water around a Swedish archipelago, contemplating how the twists and turns of life had taken me here.

I’m now a firm believer in hydrofoil electric boats as one of the best ways to bring efficient electric boating to the world’s lakes, rivers, bays, seas, and other waterways in order to replace gas-powered boats. And it’s only partly because of how much fun these things are!

Electric boating has a lot of advantages: Electric boats are cleaner and quieter, making for a more peaceful afternoon on the water. They require less maintenance, making electric boats cheaper to operate in the long run. And they are simply more enjoyable to use when you don’t have to worry about all the hassles of a gas engine.

The major downside is that boats simply aren’t a very efficient form of transportation. Moving all of that water out of the way requires either a lot of fossil fuels or a lot of battery. That’s a major reason why gasoline’s higher-energy density has won out for so long on the water. Small batteries just don’t go very far on water, and big batteries are expensive.

But Candela has solved that problem by making its boats much more efficient. The key was simply to take them out of the water and fly above the surface.

Check out my video below showing my first test ride of the Candela C7, a flying electric boat!

Candela’s hydrofoil electric boats actually lift the hull entirely out of the water, flying at around 70 cm (just over 2 feet) above the surface.

The Candela C-7 boat that I tested was produced nearly entirely from carbon fiber, making it ultra lightweight. With less weight and considerably less drag, the boat flies easily and makes its 40 kWh battery last much longer than it would on any typical planing boat.

But the most beautiful thing about the C7 is just how easy it is to use.

Hydrofoils are tricky things. The C7 flies on a pair of them, but it’s not naturally stable like that. Just like a fighter jet, computers are constantly adjusting the control surfaces to keep the boat flying true.

To the unassuming captain (me, in this case), it feels as easy as pushing a button. I simply grab a handful of throttle and shove the lever forward. That’s where the countless hours of engineering and programming kick in, with the Candela team having designed the flight control system to automatically lift the boat up and out of the water at around 15 knots.

From there it constantly makes tiny corrections to keep the boat flying smoothly.

It’s one of those things that sounds simple yet is anything but. And the better it works, the less you notice it. And it works really freaking well.

I was able to traverse wakes from other boats as well as waves without the Candela missing a beat. It just slices right over them and continues on its way… most of the time. Once I tried hitting a particularly large wake from a 100+ foot ferry, the kind with those long, spread-out wakes. That time I didn’t quite make it. Instead, the C-7 landed and I had to give it throttle again on the other side to lift off again.

Even then, it was pretty amazing that the boat just figured it out. It laid itself back into the water with a splash and was then ready to go again right away with another lift-off and back to foiling. Candela’s Mikael Mahlberg explained to me that those large ferry wakes (and some of the larger open ocean waves) are some of the few instances where the C-7 can’t quite clear them and is forced to land and take off again. But the company’s upcoming larger C-8 electric hydrofoil boat will be able to clear larger water obstacles.

Speaking of boat wakes, that’s another trippy thing about riding in a Candela. Not only is it much quieter because you don’t hear the water crashing against the hull, but when you turn around and look backward there is zero wake. You zip along at 30 knots leaving just a barely noticeable trail of bubbles that dissipates within seconds. You could literally fly through a no-wake zone (except don’t) without leaving a trace. It’s of course best to respect the rules.

While the smooth and quiet ride is a serious advantage of electric hydrofoil boats, the ability to use much less energy is the key.

And the boat I was in hadn’t had its hydrofoil cleaned in a while, which Candela says would have dropped the energy usage closer to 0.8 kWh per nautical mile. The C-7 can’t lift its main foil above the waterline, meaning cleanings require the hull to be lifted out of the water, but the upcoming C-8 will be able to raise its hydrofoil higher and allow cleanings to take place while the boat is still in the water.

Even if you’ve got a few barnacles on your foil, though, your efficiency is still so much higher than a planing boat that it’s almost not worth comparing. There are other electric boats that can get better ranges than the C-7’s 50 nautical miles per charge, but they also pack in up to 10 times more battery. That’s costly, heavy, and just plain wasteful when you can get by with less.

Some boats that are designed for different types of use might need more range, but 50 knots feels like plenty for the type of boating we did. Mikael picked me up from my hotel in the morning, we flew around the Stockholm archipelago until we got hungry, stopped for lunch on the water, then did another 90 minutes or so of flying and filming before heading back later in the afternoon. As a recreational boat for this type of use, it feels perfect. If I was trying to make it back to the US, I’d want more battery. It’s all about what you need for the type of boating you’re doing.

So while it doesn’t have the battery charge to go for days, it has enough for a single fun day, then you simply recharge at the dock.

The other limiting factor isn’t the battery, it’s the cost. Depending on the features and the exchange rate, the boat is somewhere in the $280,000 range. It is certainly a very nice boat with beautiful carbon fiber work, a giant navigation and control screen, and very nice seating. Wood grain tables and other accents also add to the luxury feel. But there’s no beating around the bush here, it’s expensive.

But for a hand-built carbon fiber electric hydrofoil boat, the price fits. There just isn’t anything else like this in the the world – Candela is it. So if you want one, they hand build them for you.

Or at least that was the case until they rolled out the plans for their C-8 boat, which is designed for higher-scale production. That way you get a bigger boat with a more advanced motor system and more capacity for essentially the same price. So again, it’s a big chunk of change, but nobody gets into boating as a budget activity.

As much fun as the C-7 was, I can’t wait to experience a ride on the C-8 with its new C-Pod motors and more spacious layout. There’s even a cabin that can sleep two adults and two kids, plus a toilet and shower. Candela obviously has a lot more to show us, and if my first test ride was any indication, it’s got some very impressive boats on the horizon.