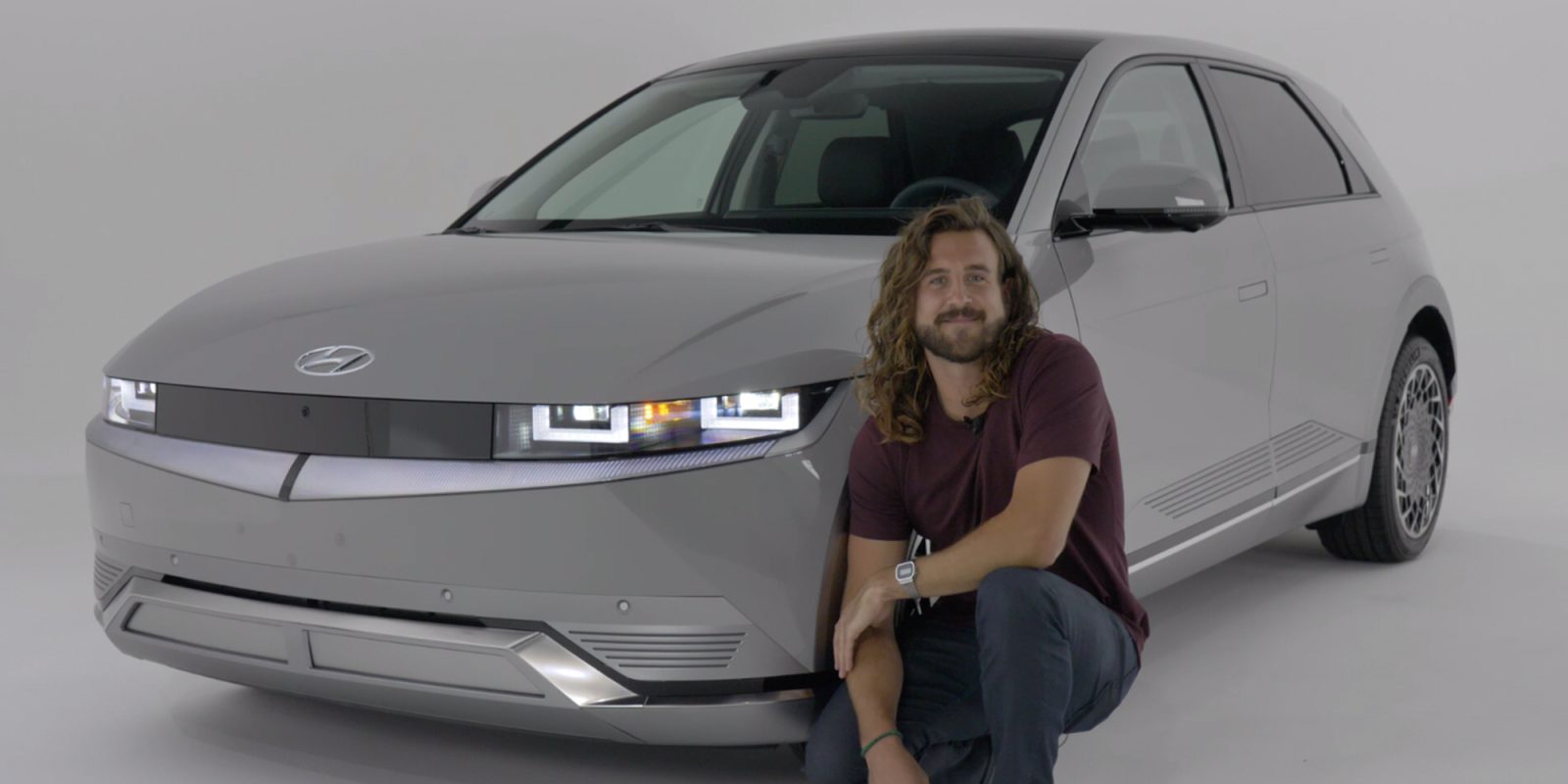 As the US inches closer toward a cherished and long-desired sense of normalcy, automakers have begun to open their doors to the public and allow writers like myself to actually see EVs up close. I kick off my inaugural in-person vehicle experience of 2021 (in May), with a sneak peak of the upcoming Hyundai Ioniq 5 CUV. Below is everything you can anticipate to experience yourself when this EV hits the market.

The Ioniq 5 is the first EV in an upcoming brand shift from Hyundai, as it transitions toward a more electrified fleet. Last summer, Hyundai launched Ioniq as its own electric brand beginning with three vehicles, the first being the Ioniq 5. This new EV is a deviation from the previous Ioniq hatchback that debuted from Hyundai as a 2017 model and came in three powertrains including an all-electric version.

According to Hyundai, the previous Ioniq hatchback will no longer see any new models, although the Korean automaker has big plans for the refreshed Ioniq namesake moving forward. In fact, Hyundai has already shared plans for a Ioniq 6 premium mid-sized sedan, and a family-focused, 3-row SUV Ioniq 7 in the pipeline.

For now, however, all eyes are on the Hyundai Ioniq 5 as it moves ever closer to full production this fall. Here’s everything we know so far, including up-close images and a video walkthrough with yours truly.

Hyundai is classifying this EV as a compact SUV or CUV. It’s sort of a new term these days, but you should be hearing it more as many automakers are developing longer vehicles with maximized interiors, all at much lower heights to increase aerodynamics and range. According to Hyundai, this EV is comparable to Ford’s new Mustang Mach-E and Voltswagen’s Volkswagen’s ID.4.

The Ioniq 5 will debut in three separate trims: SE, SEL, and Limited, and all will come standard with a single motor, RWD powertrain. With that said, a dual motor AWD option will be available on all three trims as well. Let’s begin outside and work our way in.

Upon seeing this EV close up, the first thing that truly stood out was its size, particularly in terms of length. I’m currently driving my second model of the now lame duck Ioniq hatchback, and can confirm the Ioniq 5 is a whole new beast.

The first element I noticed was its side profile, and how long the EV’s wheelbase is. Hyundai told us the Ioniq 5 wheelbase sits at over 118 inches, 4 inches longer than its Palisade 3-row SUV.

Furthermore, it’s easy to notice minimal overhang on both the front and rear ends, optimizing as much interior space as possible (more on that later).

As you can see from the images below, Hyundai put a huge emphasis on aerodynamics to squeeze every mile of range out of the EV. This includes seamless panels like the clamshell hood and flush door handles, as well as active flaps below the rear bumper that automatically open to allow air off the bottom of the vehicle to flow outward.

Lastly, the rear spoiler is fit with two aero cutouts that allow air to flow through and keep that back end flush with the road. This contributes to the Ioniq’s .288 drag coefficient, too.

Another cool feature that stands out the pixel style lamps on the headlights and tail lights. They feel like a throwback to 80s 8-bit graphics, but are complemented by the forward-thinking look of the rest of the vehicle.

This feels like one of the elements a specific group of consumers will fall in love with on this EV, garnering a fan club community level following, like most successful vehicles do.

Inside is where you will truly notice the size and space of the Ioniq 5. Hyundai’s proprietary E-GMP platform allows for a completely flat interior floor front to back, showcasing Hyundai’s smart living room approach to the design.

That begins with the driver’s seat that offers a zero-gravity chair capable of full recline, complete with a foot rest. As you’ll see in the video, it was tough to get me out of it.

The flat floor also allows for a sliding center console that moves back and forth 5.5 inches with a hinged armrest. This allows the passengers to store their purse, laptop, chinchilla, or whatever else safely, and can easily be slid back out of the way.

Up above, the vision roof offers an unobstructed view above, helping expand the feeling of space inside the vehicle. This roof option is only available on the top tier Limited trim, however.

The dash features 2 x 12-inch displays, sharing all the info you need at a quick glance. I was particularly impressed at how intuitive the steering wheel design was, offering all the bumpers, toggles, and other buttons within a quick fingers reach, exactly where you’d expect to find them. This should help drivers keep their eyes on the road… at least once they figure out where everything is.

Speaking of that, the Ioniq 5 also comes with a cool Heads Up Display (HUD) and can project out into the lane in front of you, offering unique augmented reality assistance. This feature comes standard in addition to an improved ADAS system that features a ton of smart tech to ensure passenger safety. This includes junction turning, lane change assist, and evasive steering assist, to name a few.

Everywhere I looked, there were USB ports in both the front and back in addition to a wireless charging pad in the center console. In the Limited trim Ioniq 5 that I was in, the back seat offers a Vehicle to Load (V2L) 120 volt outlet. Perfect for a laptop charger or blow dryer when you’re running late.

Charging on the Hyundai Ioniq 5

It’s not an element that’s necessarily visible on the Hyundai Ioniq 5, but its charging capabilities are some of the most impressive specs this EV has to offer. The Ioniq sits upon a 77.4 kWh battery pack, which Hyundai claims is 7% more energy dense than its current Kona EV, but with almost 50% more energy output.

You may remember us covering a demonstration of the Ioniq 5 charging to 80% in just 18 minutes. Well, in speaking to the Hyundai team directly, we can confirm the charging speeds are possible… if you have the power.

Conversations with automaker did confirm charging from 10% to 80% in 18 minutes via DCFC at 250 kW. Under these charging conditions, the new Ioniq 5 should be able to reach a peak power of around 235 kW, offering 68 miles of range after just five minutes. As it currently stands, this charge rate is (literally) miles ahead of EV competitors in the CUV class.

So you may be thinking, “Cool, but where am I going to find 250 kW of power?” Fair, as 150 kW DC fast chargers are more accessible these days. Luckily those charge speeds are quite impressive as well. Hyundai estimates the Ioniq 5 will charge from 10-80% in just 25 minutes via 150 kW DCFC, as well as under seven hours via level 2 charging at home (240V, 10.9 kW).

The aforementioned interior V2L outlet could serve as nice perk for future passengers in the new Ioniq, but its the exterior V2L capabilities that really set this EV apart. Each Hyundai Ioniq 5 will come with a V2L adapter that plugs directly into the charging inlet, offering owners a 120V outlet.

As a result, your Ioniq becomes a really big power bank, offering you the juice you need to camp, tailgate, or operate that new margarita machine you just bought. Furthermore, any of your EV wielding compadres can plug in and replenish their own vehicle via level 1 charge. At 1.9 kW, it’ll take some time, but it can certainly do the job in a pinch.

If you’re nervous about falling asleep in your zero-gravity chair and having your margarita machine drain your entire battery, forget about it. You can set a discharge limit for the power output of the V2L port(s), thus cutting off power when your Ioniq reaches that designated battery percentage.

Hyundai told us the Ioniq already has fully bi-directional technology in place for vehicle to grid (V2G) capabilities… but not quite yet. There is a lot of red tape in regulations and certifications needed to proclaim V2G capabilities, including the vehicle’s ability to communicate directly with the electric grid. This is something Hyundai says it is researching for the future, but cannot implement at this time.

Alright, you’ve seen the aerodynamic exterior, the V2L ports, and everything in between. Now let’s talk performance. As previously mentioned, the Hyundai Ionq 5 will come standard as single motor RWD with the option to upgrade to a dual motor AWD version on any of the three available trims.

As you can see in the chart above, the variations between the two powertrains are limited, but not insignificant. In choosing the AWD Ioniq 5, customers will sacrifice about 30 miles of range for almost 100 HP and nearly 190 ft-lbs of torque. The dual motors also improve acceleration time, but neither powertrain’s split is anything to write home about.

Additionally, the AWD version of the Hyundai Ioniq 5 will provide drivers with four different drive modes, quickly switchable using a bumper at the top of the steering wheel. This includes Eco mode (2WD to maximize range), Comfort (where drivers will spend most of their time), Sport (4WD with dynamic torque split to stay nimble), and Snow (50/50 locked torque to maximize traction).

The Hyundai Ioniq 5 is currently slated to begin production in South Korea, starting with the AWD version in August, followed by RWD models in September. Since these EVs will have to travel across the pond to deliver to the states, you can expect to see them on roads this fall.

Hyundai is currently anticipating September/October for the AWD Ioniq 5’s, and October/November for the RWD. Could make for a great stocking stuffer this holiday season! This EV will debut in six exterior colors including the Cyber Gray you’ll see in the video below. As for interior, there will be three available options to choose from, including all black, two-tone gray, and two-tone dark green.

As for pricing, we tried hard, but Hyundai wouldn’t play ball this time. They said that pricing will be announced closer to start of production, likely sometime in August. Hyundai did tell us, however, that it plans to remain competitive in its pricing compared to similar models in the CUV class.

For added texture, the Mustang Mach-E is priced between about $43k and $60k, while the Volkswagen ID.4 is priced at a range of $40k-$50k. That’s all before any federal or state tax incentives. So expect the new Ioniq 5 to land somewhere in that range as well.

Video walk-through with the Hyundai Ioniq 5

If you’re more of a TL;DR type, you’re in luck! I had a chance to visit a Hyundai Ioniq 5 up close and personal and was even fortunate enough to accidentally lock myself in the trunk. You can check out the full video below, and be sure to check out our Hyundai Ioniq 5 guide for the latest news as pricing emerges.