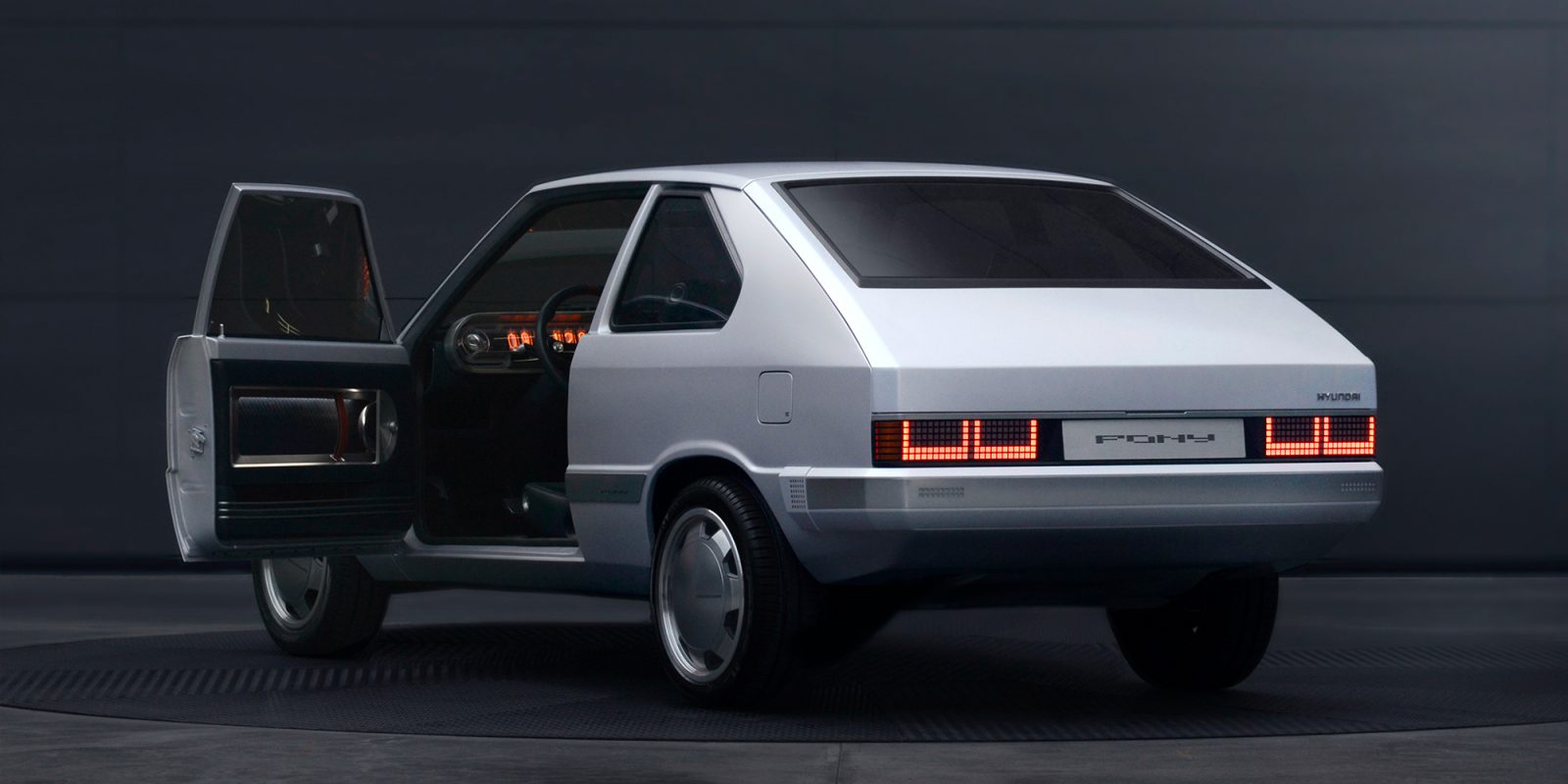 The original Hyundai PONY was produced from 1975-1990 as a compact four-door sedan with several later variations for multiple markets. The hatchback was originally designed by Giorgetto Giugiaro and became the first vehicle mass-produced and exported out of South Korea. It put Hyundai and its home country on the automotive map.

As part of Hyundai’s “Reflections in Motion” exhibition at the Busan studio April 8-June 27, visitors can come view unique concepts like the PONY EV up close.

Since this is only a concept vehicle, much of what we know about the vehicle is cosmetic, but that doesn’t mean there isn’t a ton to unfold here. Simple and modern, retro but futuristic, the Hyundai Heritage Series PONY EV has been reimagined with an electric powertrain and tons of futuristic features we may someday see in the Korean automaker’s production vehicles. Per the press release:

The Heritage Series PONY’s exterior is marked by a matte, shimmering surface of silver throughout front to rear part of the vehicle, hatchback silhouette. Notable features include camera-based, fender-mounted exterior mirrors to the fore of the windshield, pixelated round headlights and U-shaped taillights made of LED lights.

Hyundai decided to forego the traditional side view mirrors for camera based versions. Furthermore, the automaker’s focus of pixels and 8-bit graphics are prevalent in the LED headlights and taillights. Hyundai calls this its “Pixel Road Trip” approach to design, which it has also implemented on newer production EVs like its Ioniq 5.

Moving inside, the EV concept offers a classic but modern feel. One element that really stands out is the concept PONY’s speed-gauging instrument panel. This consists of lighted vacuum tubes resembling the early says of light bulbs, but offering stats for modern day functions like energy/range.

While the exterior may seem rather retro, the interior of the Hyundai Heritage Series PONY EV offers cutting-edge tech subtly implemented among high-quality materials. This includes features like a digital touch transmission, a cradle space for your smartphone, and a voice-activated steering wheel. No cassette player either, although the dash image does sort of look like a disc drive, no?

The trunk features a solid-steel case that houses a last-mile mobility device of some sort, which, according to the press release, represents “Hyundai Motor’s human-centered design commitment.” Hyundai has not shared any images of this mobility device, but as you can see from the image below, its case looks pretty massive.

This Hyundai PONY EV concept is like something Doc Brown and Nikola Tesla would have built for Wayne Campbell of Wayne’s World. While it remains a concept slated to sit and be gawked over at an automotive art museum of sorts, it represents more than that.

First, it’s an homage to Hyundai’s heritage and the history of South Korean automotive manufacturing as a whole. Secondly, its an opportunity to showcase conceptual or nascent technologies that could very well exist in upcoming production vehicles from Hyundai. This EV remix is a nod to where the automaker came from, upgraded with the tech it plans to elevate its EVs with next. Lastly, it simply looks cool as hell.

As a child of the (late) ’80s and a sucker for most things retro, I would love to pop on my leather Member’s Only jacket and take this PONY for a spin. That being said, this is only a concept that appears to have been specifically created to be viewed and photographed, not driven. Perhaps if Hollywood reboots Back to the Future (they shouldn’t), this could be the vessel.