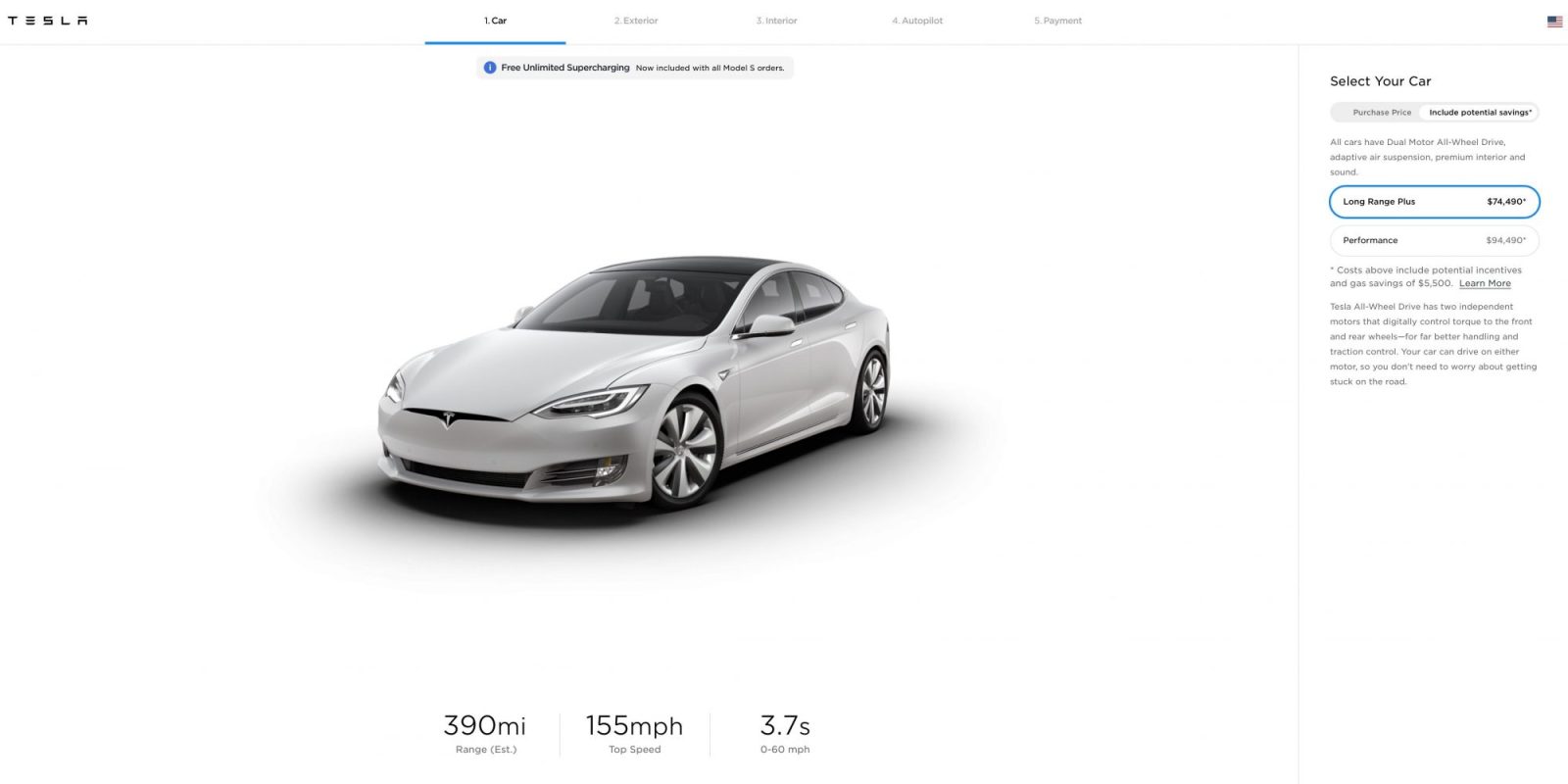 Tesla has updated their Model S and X offerings with ever-higher range numbers. The cars now have a listed 390- and 351-mile range, up from the previous 373 and 328 miles.

In addition, the Model S Long Range Plus now comes standard with the new 19-inch tempest wheels. The Model X retains the same 20-inch/22-inch wheel selections as before the update.

A big powertrain update is due some time this year, and should come along with a battery capacity increase. Tesla is calling this the “Plaid” powertrain, an homage to the movie Spaceballs.

But it looks like this isn’t that, since performance numbers are unchanged on both models.

It’s not clear whether the update includes any hardware changes or is the result of more tweaking of Tesla’s software and efficiency formula.

Tesla last updated the range of Model S and X last April after doing some drivetrain changes. This resulted in a more than 10% improvement in range (they later corrected the numbers slightly, adding 3 more miles).

There has also been no change in charging rates, with both cars still capable of 200kW maximum charging speed.  Both still qualify for free supercharging.

Given that the Model X also got a range update (and a large one than the S) but without a wheel update, it seems that the changes must go beyond the new wheels for the Model S.

Performance models did not receive a range update. The Performance Model S still has 348 miles of range and the Model X has 305 miles.

Update: It looks like the “Plus” designation is nothing particularly new after all. Tesla CEO Elon Musk said tonight that “All S/X cars made in recent months have actually been above stated EPA range. Will be unlocked soon for free via software update.”

Tesla is also considering adding even more wheel/tire options, as more aerodynamic wheels (like the base Model 3 wheels) or tires with lower rolling resistance could push range numbers above 400 miles.

I’m going to say something that a lot of Tesla fans find controversial, but that I hope many longtime EV owners will understand.

Honestly, these numbers are pretty meaningless. An extra 17 and 23 miles worth of range aren’t really going to change anything, nor are they going to enable more trips in a world where supercharger access is already great and is improving every day.

Teslas are already great road trip cars and a ~4% increase in range doesn’t really change that fact. At the end of the day, you can give yourself a 4% range increase by just slowing down by a few miles per hour (use your energy app on your car to see this happening).

There might be a small amount of edge cases who benefit from this, but for the most part, going forward, Teslas will become more capable due to faster charging and deployment of more redundant superchargers. At this point, the main thing holding back Teslas on road trips is the occasional busy supercharger.

And frankly, I’d rather Tesla stop focusing on increasing range numbers and focus on charging instead. Ever-increasing range numbers just set a consumer expectation that range is the be-all, end-all spec for an electric car, and that no other specs matter. This may cause them to delay a buying decision with the perception that EVs “aren’t good enough yet” on range.

I would argue that other specs — charging, efficiency, technology, and the general feel of the car — are far more important.

I wrote about this previously in this post about Porsche Taycan efficiency, and argued that its efficiency is what mattered, not its low range. Since then, we’ve seen that the Taycan’s range numbers really didn’t mean anything anyway.

The world isn’t getting any bigger, and in fact, with quicker and denser supercharging, the EV world is getting smaller, closer together, and easier to travel within. So we don’t need to keep seeing these numbers go up and up forever.

If this is a result of further efficiency improvements for Tesla, that’s great. More efficiency is always good. Hopefully that efficiency leads to cars that need less battery capacity to go the same distance, so we can then spread our battery supply wider and get more gas cars off the road.

Right now, electric cars are largely still limited by battery supply. If we can get more gas cars off the road by putting fewer batteries into each of them, that means an environmental benefit for all of us.

And I’m not the only person who thinks this. Years ago, both Elon Musk and former Tesla CTO JB Straubel said many times that Tesla could make a 500-mile range car, but that it would be expensive and heavy, and that that much range isn’t necessary. Musk has stopped saying that since, as Tesla has ramped up their messaging that seems to suggest “range as king.”

Incidentally, I also think the next Roadster would be better with less than 600-mile range (with more power-dense cells, in order to save weight), and am perfectly happy with the ~220 mile range of my original Roadster minus battery update. I wouldn’t want to take a long road trip with that car anyway, and if I did, I’d rather have supercharger access to help enable it. Especially if it lets me save weight, which makes the car more fun to drive.

To be fair, this is one spec advantage that Tesla holds over other EVs, and the messaging has helped Tesla dominate the EV market.

But if Tesla’s mission is to “accelerate the advent of sustainable transport,” making 200- to 250-mile range cars with quick-charging capability seem inadequate, even though they are more than enough for most drivers, might work counter to that goal.

So I hope Tesla doesn’t keep pushing the numbers up forever. Or if they do, at least offer it as an option, with a base 200-ish mile model like the Model 3 SR.  Then people who know they don’t need hundreds of miles can buy a car with a more reasonably sized battery, and gain the attendant weight and cost benefits thereof.

Now, commence telling me I’m an idiot in the comments. Thanks.