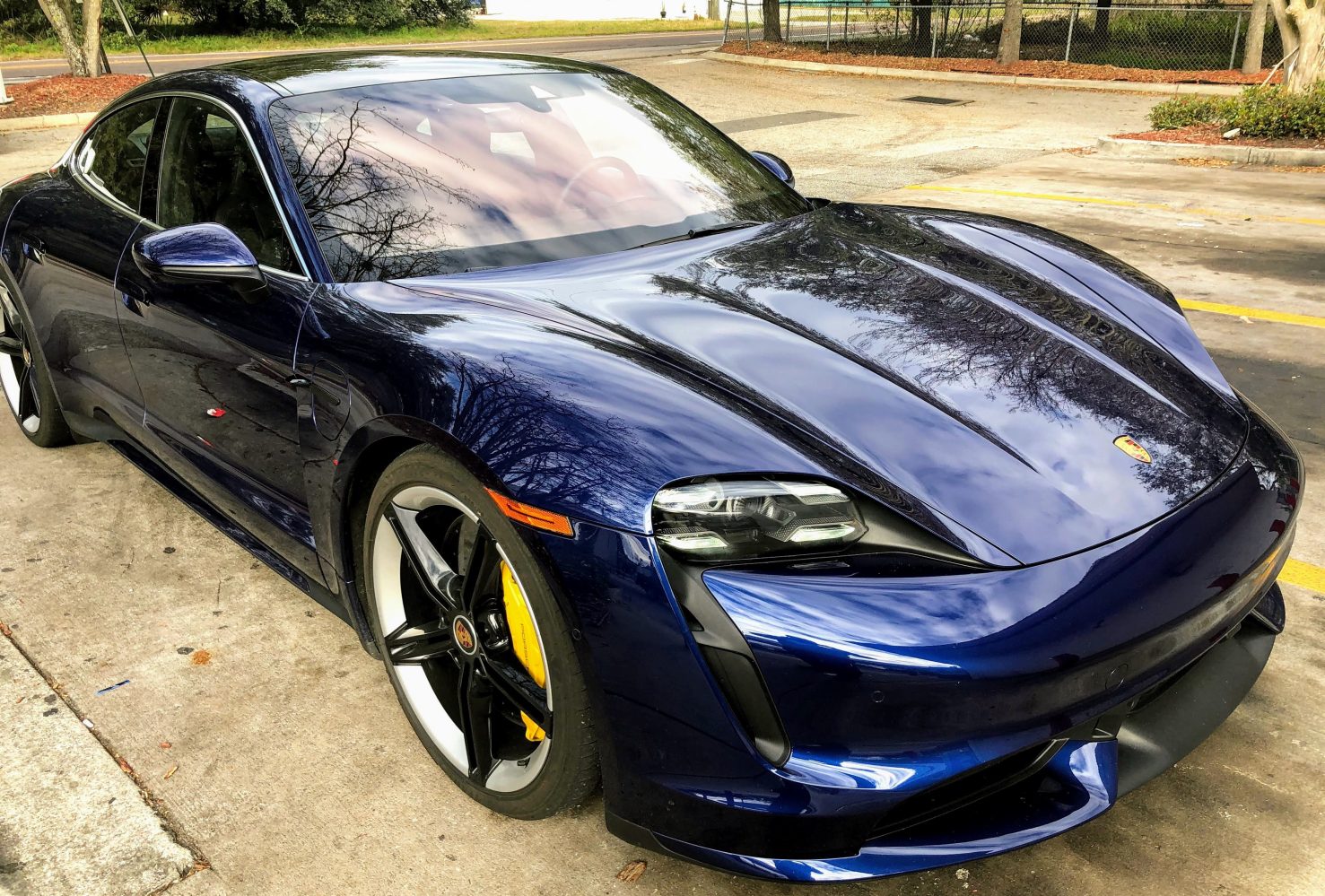 We got to spend 400 miles’ worth of Interstate time in the Porsche Taycan a few weeks ago. But as more people are getting their hands on the Taycan (find local dealer test drive), we’re starting to see some new scenarios developing, and comparisons are obviously being made to Tesla’s current flagship vehicle, the Model S P100D.

The Taycan Turbo S gets a lot of flack for its 192-mile EPA range. However, Car and Driver found its range driving around a ring at 75 miles per hour for 100 miles was remarkably close to the Tesla Model S P100D. They extrapolated that the Turbo S’ range is 209 miles versus 222 for the Model S P100D (which is EPA rated at 348 miles of range).

The improved range score of the Porsche isn’t nearly as surprising as what the Model S got, which was about two-thirds of its stated range.

Now, this test isn’t what the EPA does at all in their city/highway test. Porsche has designed this car to be literally driven on the Autobahn and the track versus Tesla’s more real-life use case. This test was almost built for Porsche’s design because it didn’t include regenerative braking (which is actuated by a brake pedal) versus Tesla’s single-pedal road usage.

That being said, it’s an eye-opener for both Tesla and Porsche owners who take long drives on the highway at 75 mph.

Charging speed was also compared, and as we’ve already discussed at length, Porsche has an inherent advantage at the end of its cycle because it doesn’t charge its batteries up to full. Also, the Model S only currently charges at 200kW, while the Model 3 charges a lot closer to the Porsche’s 270kW top speed. At Electrify America in Florida and Georgia, I was only able to hit 250kW in my tests with the Taycan. A Tesla Model 3 charging at the same or even reduced 250kW still adds significantly more miles per minute of charge because of its drastically lower kW used per mile of range.

Car and Driver also got a 2.4-second 0-60 time on the Taycan, which is in line with Tesla’s Model S P100D. However, C&D somehow only managed to hit 2.5 seconds in the Tesla. We’ve previously seen 2.4 seconds hit in both cars, and even a few under 2.3s in the Model S.

Drag Times did what they do to the Taycan: Take it to a local track and get quarter-mile times that line up with Car and Driver‘s 10.3, even in strong winds. Unfortunately, the track wasn’t prepped and there were those high wind speeds.

Jay Leno’s Garage also got the full tour from Porsche rep Calvin Kim. There wasn’t anything particularly insightful here, but because Jay Leno has a large following of sports car fans, the very positive review will make a big impact on mainstream American viewers. As an aside, Leno also seemed like he was nodding off, which is weird for such an exciting car.

And then drifting on ice because this is what people do:

The Taycan is a track car that feels very comfortable on the road or Autobahn. The Model S is a road sedan that can seat 5 (+2) but still tear it up on the track. Porsche’s focus is on the driver experience as it pertains to the road and performance. Tesla’s focus tends toward features for technology enthusiasts.

As far as range and performance are concerned, Porsche’s strategy of under-promising and over-delivering is a contrast to Tesla’s. Living in a mountainous part of New York, I’ve never gotten the stated range in any of the 3 Teslas (Model S, X, and 3) I’ve owned. But people who live in California and Florida are easily getting Tesla’s stated range and mileage. So I wouldn’t say Tesla is underdelivering, they are just delivering, on their promises. To be fair, I was getting under the Porsche’s stated range driving like a maniac in Florida, so maybe it’s just me and my lead foot.

How much better can they get?

As far as performance, both of these cars are in the 2.4-second 0-60 range, which is absurdly fast and borderline painful. With Tesla slated to produce Plaid Model S this year and new Roadsters (with rocket thrusters) hopefully next year, that acceleration will only get more nutty to the point where I’m starting to wonder if these vehicles will start to pose whiplash hazards for the occupants.

Also, there is always the access journalism/media bias argument to explain differences in specs. For instance, Motor Trend seems to get Tesla invites and special access to Tesla vehicles that other publications don’t. Car and Driver got early access to the Taycan and had to go buy/find a P100D for use in their tests. Motor Trend puts the Model S P100D at 2.28 seconds as compared to Car and Driver‘s 2.5 seconds. It wouldn’t surprise me to see Motor Trend come out with an Elon’s Plaid Model S versus Taycan face-off in the coming weeks considering the above. We’ll see.

In these situations, I prefer to trust or at least verify with outlets like Drag Times (or us!) who get early access to neither.

In the end, this competition only makes better cars for consumers. I’m not sure how much faster our human meat bags can accelerate without doing internal organ damage, but improved range, handling, and features benefit us all.