Tesla Model 3 is the best road trip car: 10 hours of driving on Autopilot and 0 hours waiting for charging

Last weekend, I set out on my longest Tesla road trip yet, and I came to the conclusion that Model 3 is the best road trip vehicle out there for several reasons — but the main ones are Supercharging and Autopilot.

Like many people often do in Los Angeles during the fourth of July weekend, my girlfriend and I decided to go to Las Vegas.

There are a lot of cheap flights between Los Angeles and Las Vegas, but I thought it would be fun to drive through the desert in a Tesla vehicle. With the recent Supercharger upgrade enabling up to 150 kW of charging on V2 Supercharger stations, I figured it would be a great opportunity to experience the impact of the upgraded charging capacity on a long-distance trip.

I rented a Model 3 Long-Range RWD on Turo. It was my first experience with Turo, and I was pleasantly surprised by how seamless and easy it was from start to finish.

We rented the car from a Tesla owner named James who has two Model 3s, and he lists them both on Turo, which helps pay for the monthly payments, and he can drive one of them when it’s not being rented out.

We picked up one of James’s Model 3s in Santa Monica at 10 a.m. on Friday and left for Vegas.

Now, to be fair, the Los Angeles to Las Vegas route is one of the best-covered routes by Tesla’s Supercharger network, with six stations along the way. 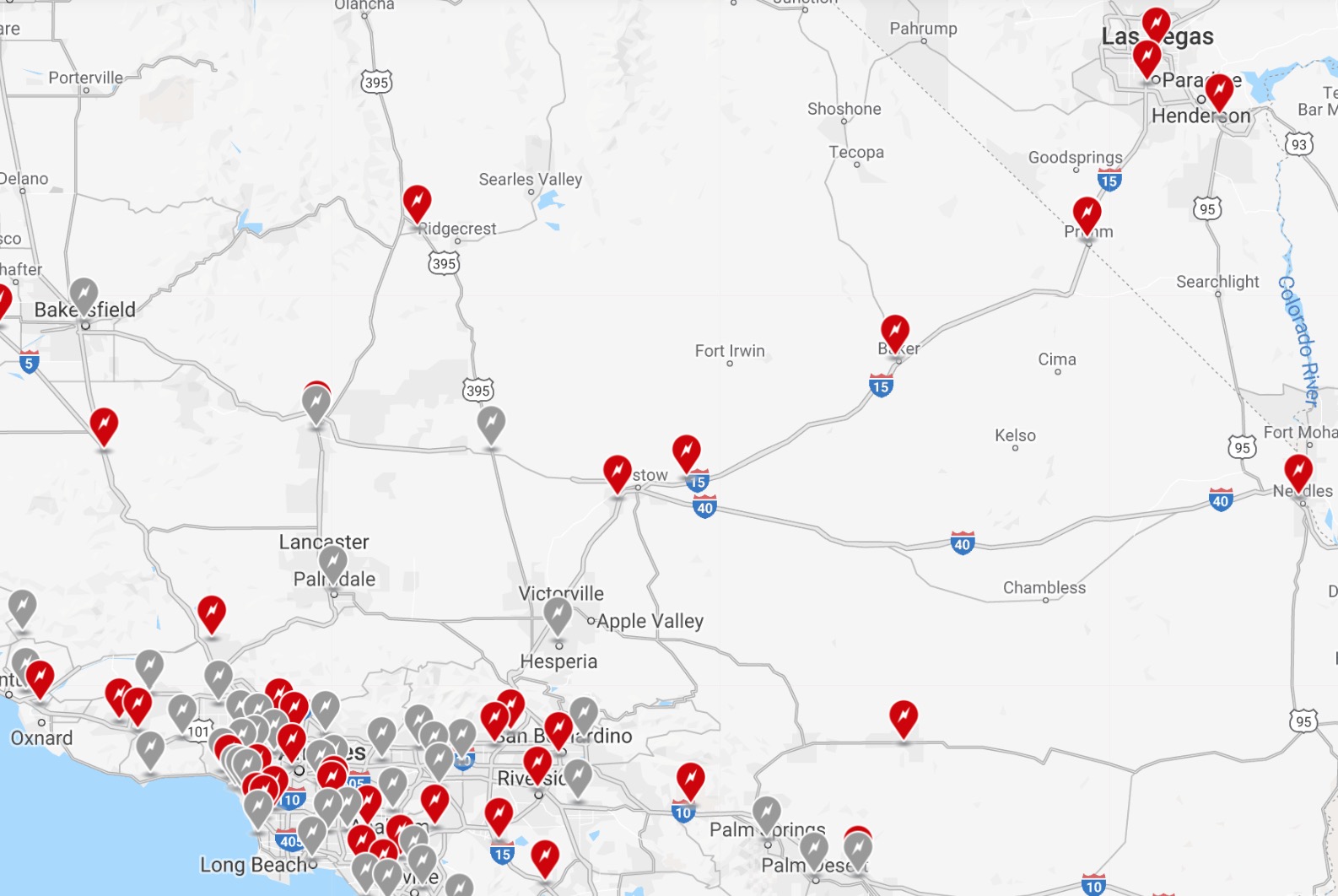 The Model 3 Long-Range RWD has an EPA-rated range of 310 miles, but it wasn’t fully charged when we picked it up. 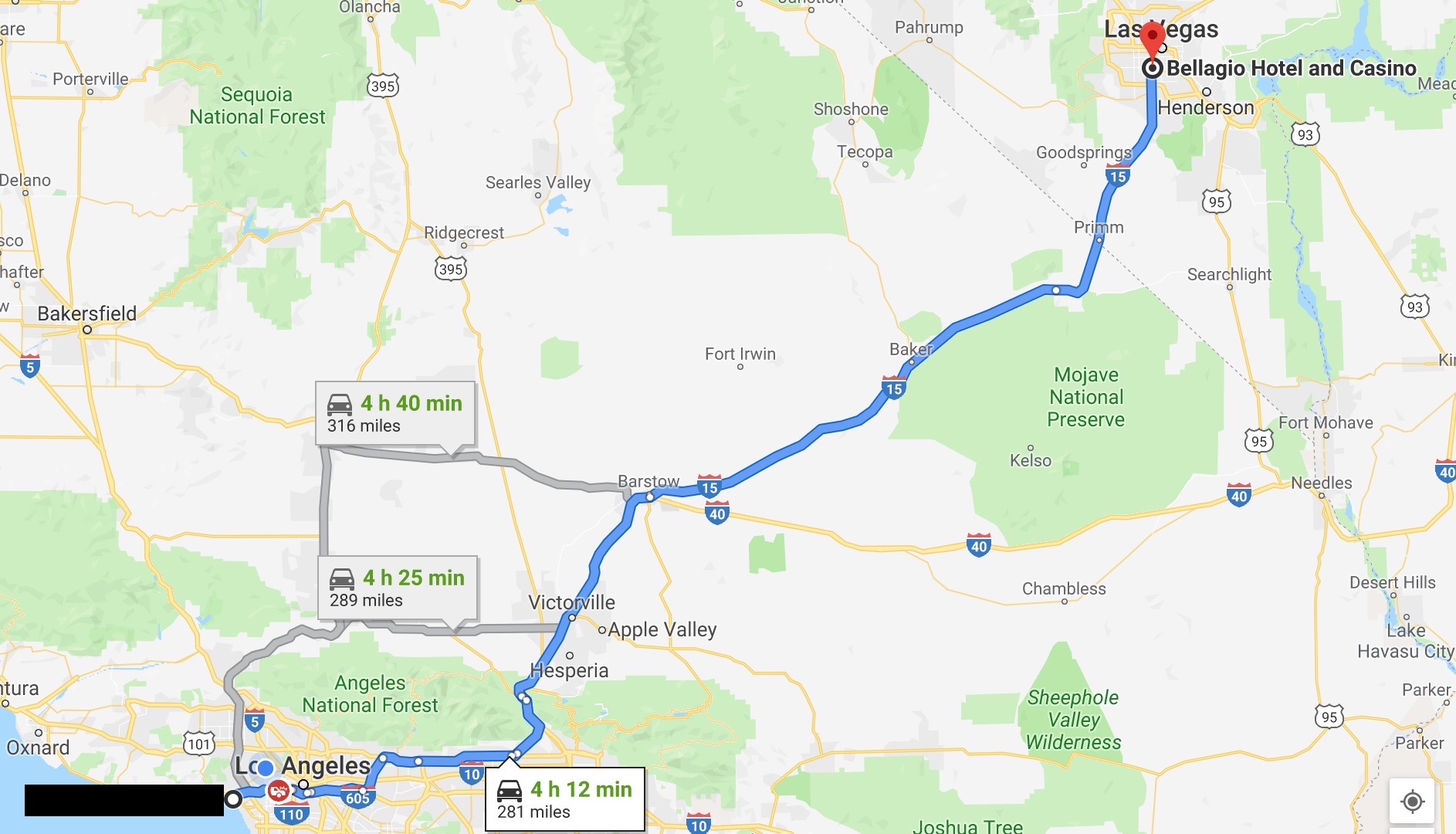 We planned to drive to Tesla’s Supercharger station in Baker and stop to charge and eat before continuing on to Las Vegas.

However, it turned out that we needed to stop to use the restroom at around Barstow, and that ended up being perfect to optimize our charging time.

We stopped at the Yermo Supercharger station just outside of Bartow, and we plugged in for about 15 minutes while we went inside to use the restroom and buy some iced tea. 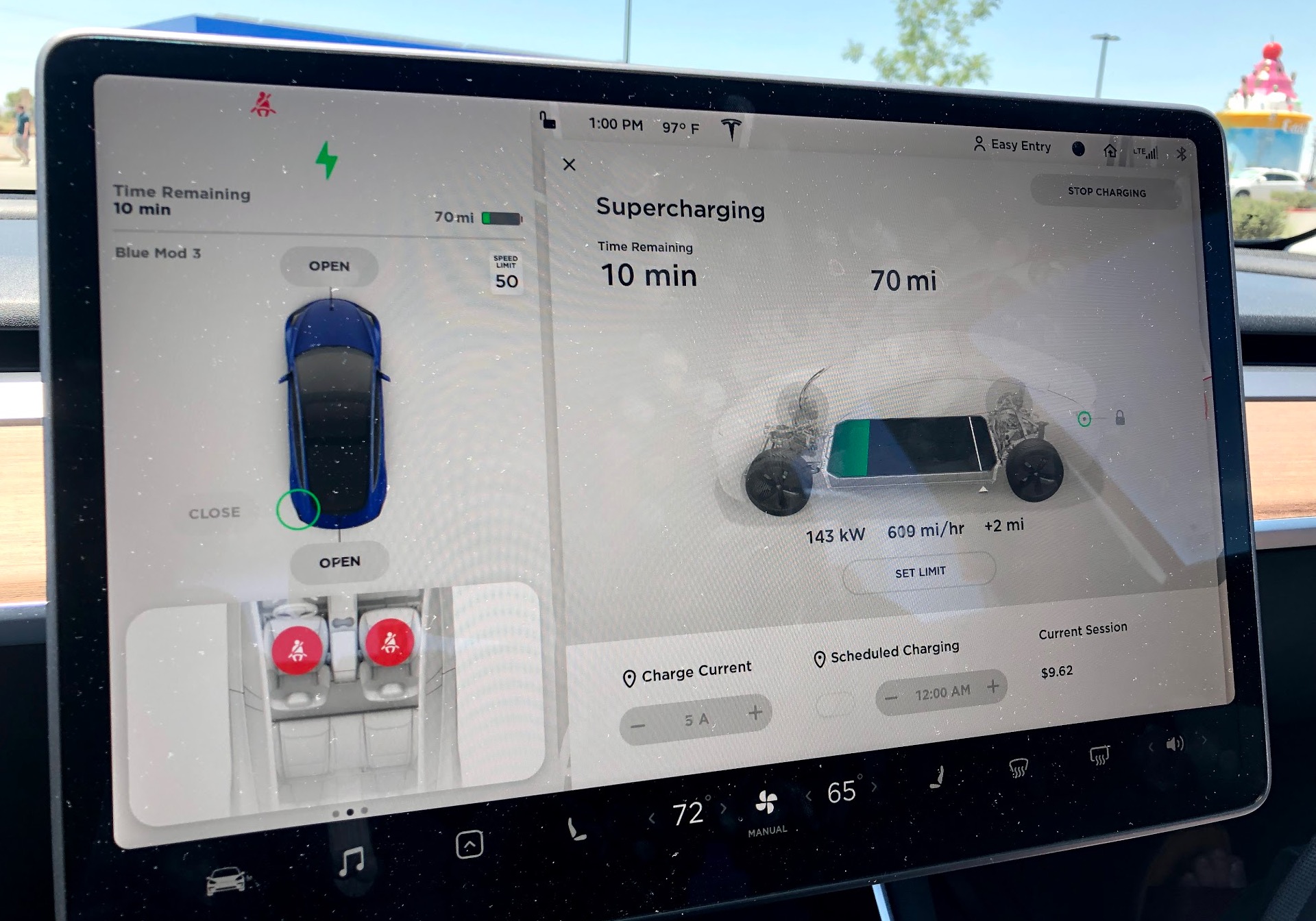 By the time we returned to the car, it had already added over 100 miles of range, which would have been enough to get to Las Vegas, but we planned to stop in Baker anyway to get something to eat.

But we had to stop in Baker regardless, because we ended up hitting an exploded tire at 65 mph just before the exit.

I was driving on Autopilot in the right lane in full traffic when I saw a vehicle two cars ahead do a weird move.

Before I fully realized what was happening, the car ahead of us ran over a large truck tire that exploded, and with all the traffic around us, I didn’t feel like I could safely avoid it as the car ahead did.

We ran over it. The hit was pretty strong on the front end, and we felt the Model 3 lift when the tire went under us.

Due to the strong impact, I feared that the damage to the bumper would be bad, but we pulled over and it only had a few scratches on the front lip: 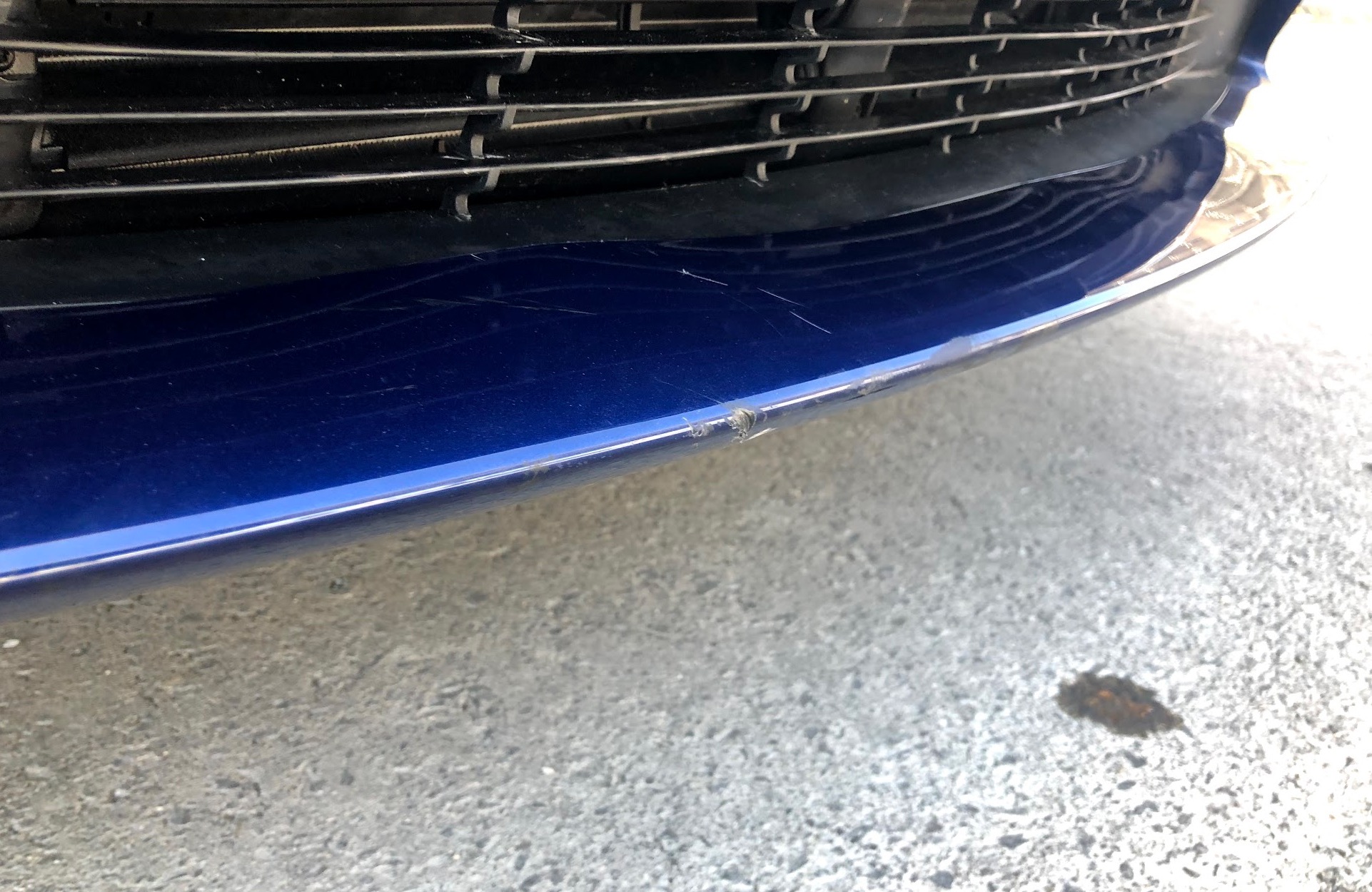 Those are pretty deep scratches, but I honestly thought it would be a lot worse than this.

When the tire went under the car, it also banged on the underbody panels and made a few plastic screws fall out, resulting in the panels hanging low: 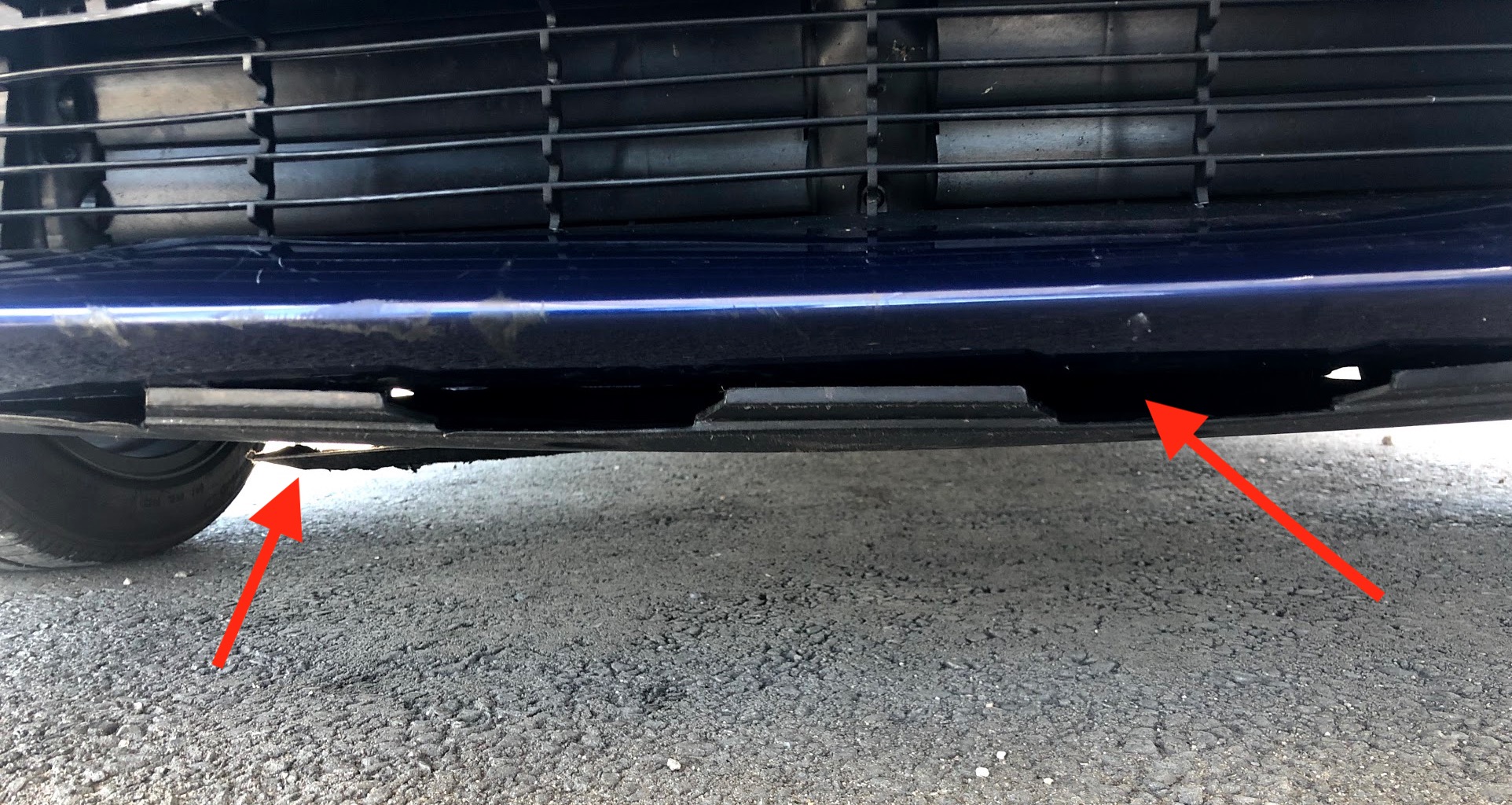 We were able to push the main underbody panel back in place underneath the front lip without too much issue.

As for the felt-like panel behind the main panel, it wasn’t as big of a deal as the main one for safety and efficiency, but we still managed to fix it up with tape (by “we,” I mean mostly my girlfriend, who is small enough to get under the car — thanks Frances!) in order to help with the airflow underneath the Model 3. 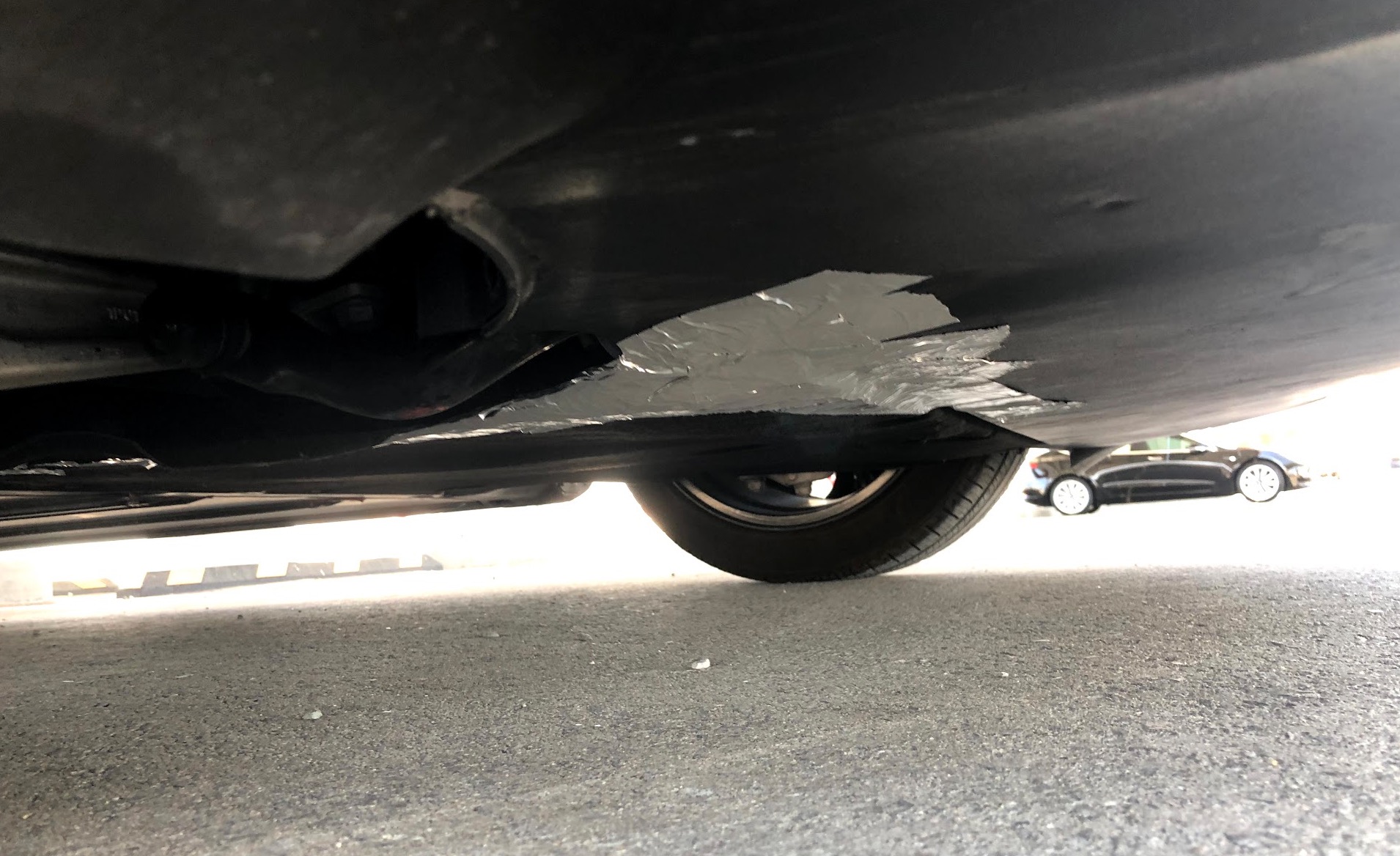 The tape fell off a few times under the heat and driving, but it didn’t affect the driving experience much.

Overall, I was impressed by how the Model 3 fared in the accident. I expected much worse damage when I got out of the car.

As for the charging, Tesla’s Baker Supercharger is great. It’s one of the largest, and it is covered by solar panels, which is a great source of power and shade in the 100F desert heat.

We ended up charging for about a half hour while eating and fixing the car’s underbody, and the battery pack was 90% full, which is overkill for the less than 100 miles left to get to Las Vegas.

On the last leg of the trip, we got a good reminder that despite media headlines, not only electric cars catch on fire: 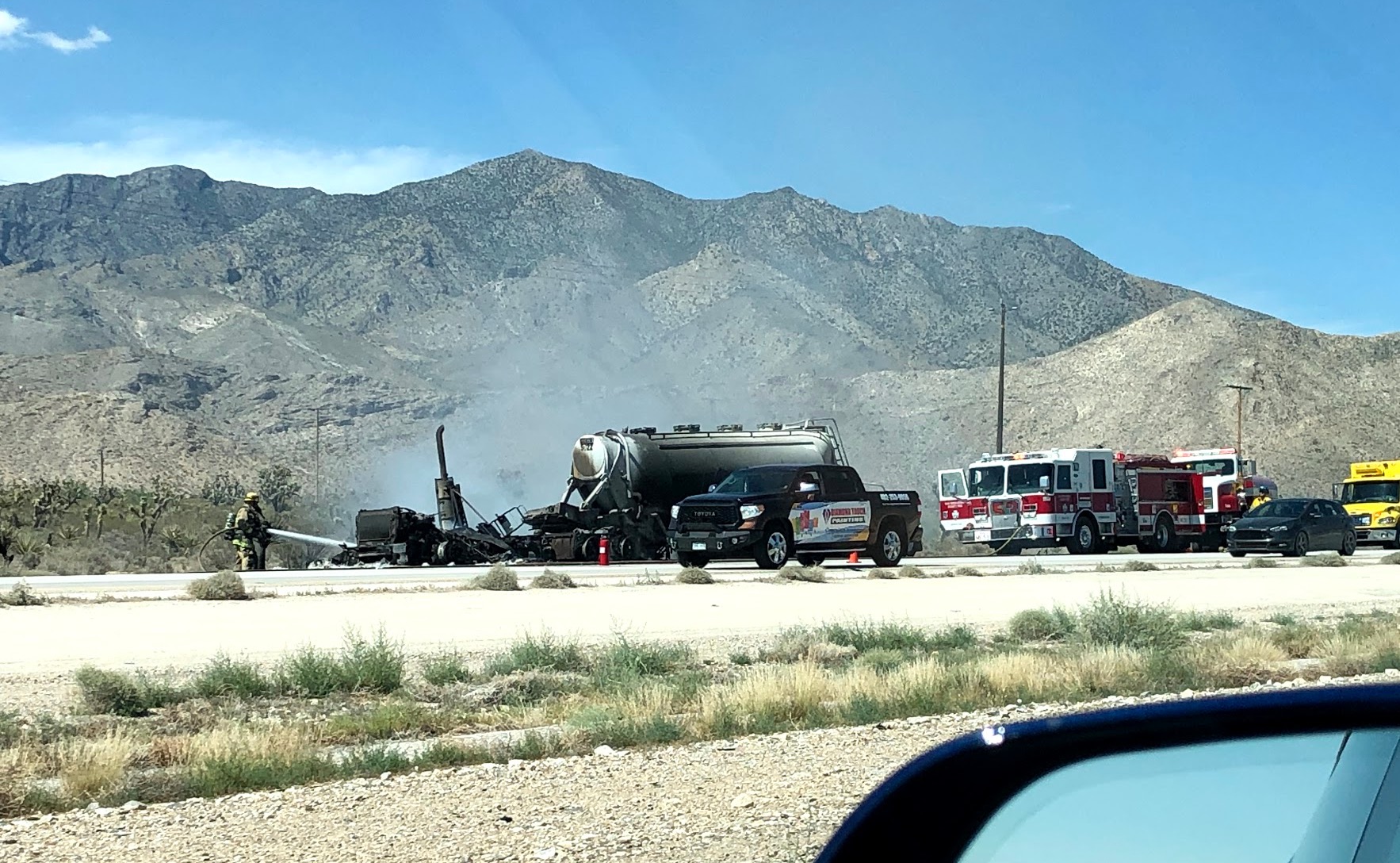 Also, you get to see a lot of renewable energy when driving from Los Angeles to Las Vegas.

Several solar farms are visible from the highway, including a beautiful molten salt thermal solar power plant, the largest in the world: 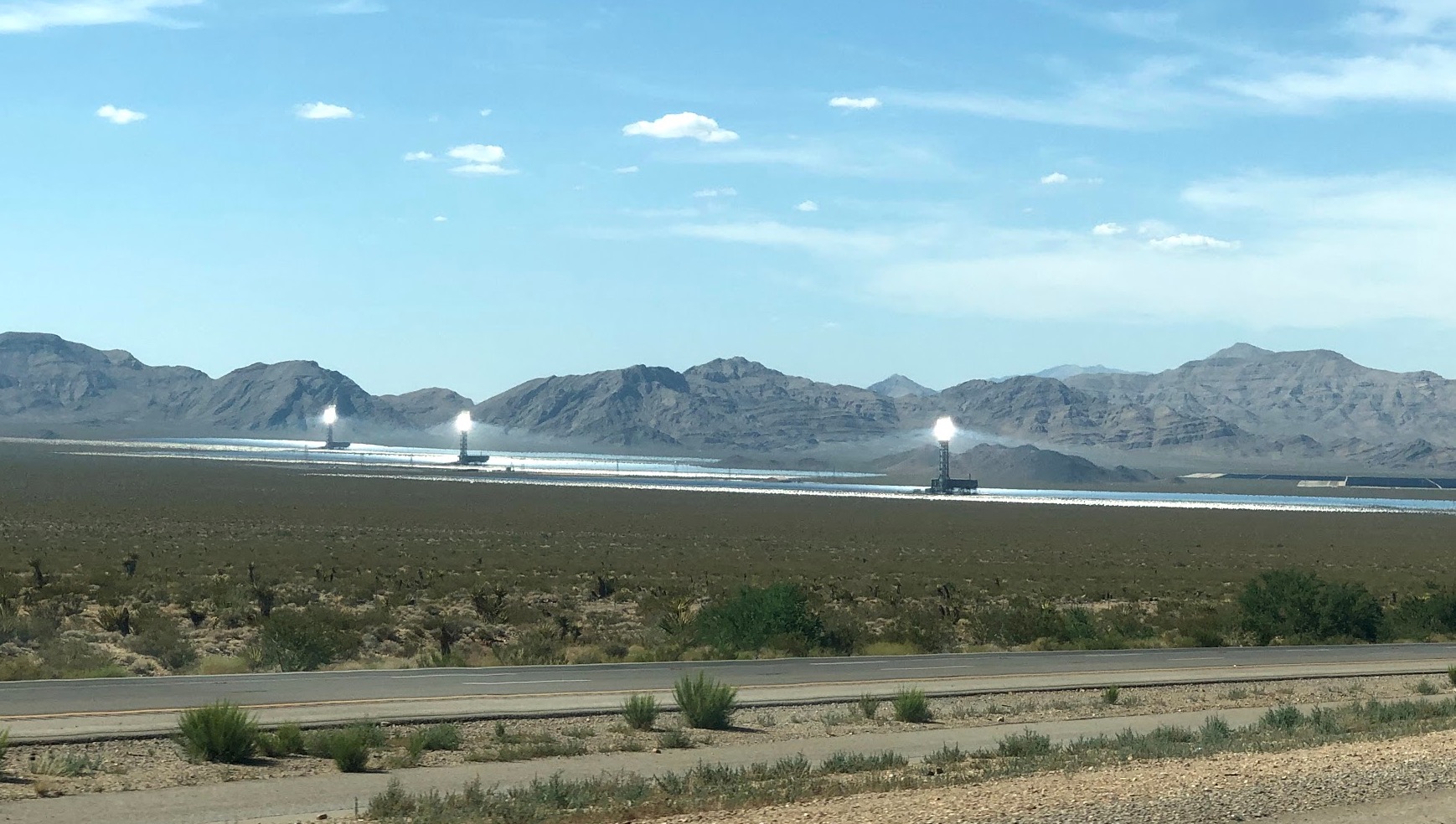 It guaranteed that we would have 100% charge when leaving, which we did on Sunday… at the same time as tens of thousands of other people, which created an incredible amount of traffic.

We could have easily made it back to Los Angeles without charging, but we had to stop anyway because the traffic increased the drive time to six hours.

Instead of sitting in traffic all day, we decided to take a longer, more scenic route that resulted in a similar drive time: 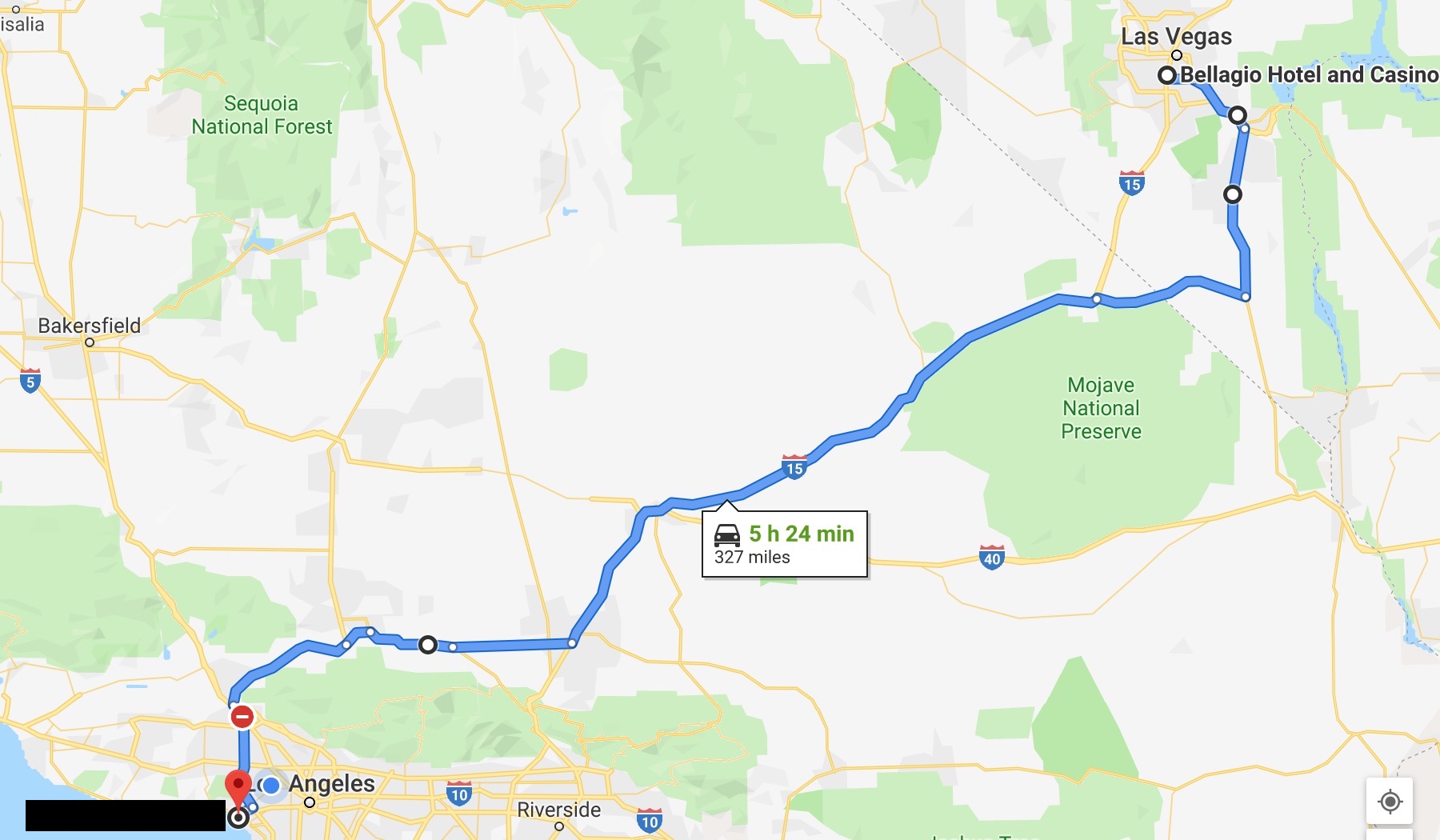 On the way back, we ended up stopping at Tesla’s Barstow Supercharger station.

With the amount of traffic, I was expecting the Supercharger to be busy, and that we might even have to wait to get a spot.

It was full when we arrived, but a few people were starting to leave so we didn’t have to wait. However, we were sharing the 150 kW power with another Model 3 since the station was full.

The Model 3 system showed 40 minutes for a 90% charge, but after three and a half hours of driving, we needed to stop to eat anyway.

We were in and out of Chili’s in about 30 minutes, and by the time we made it back to the car, several Tesla owners had left the station, including the person we were sharing a Supercharger with, which resulted in our Model 3 already being charged to 90%, so we left right away.

Another three hours later, we were back to Los Angeles with over 100 miles left.

Overall, we drove on Autopilot for about 10 hours with fewer than a dozen driver interventions, and we waited for charging for a total of zero minutes.

This was an awesome and eventful trip.

On top of hitting the tire, a few hours after arriving in Las Vegas, we experienced the 6.9 magnitude earthquake from the 26th-floor of the Bellagio tower:

The building was swinging back and forth so much that we thought it was about to collapse. Between that and hitting the tire with the Model 3, we got a pretty good dose of adrenaline for a single day.

At least we got to relax the next day by going to the Grand Canyon and playing with horses:

But even with all those fun activities, taking the Model 3 on a road trip like that is still a highlight of the weekend and a good EV learning experience.

With long-distance road trips in electric vehicles, I think people focus too much on charging time. How much time did you spend charging? If you really want to know, for this trip, it was just over an hour for more than 600 miles.

However, the time spent waiting for the vehicle to charge is a more important metric than charge time in my opinion because you have to stop anyway.

As long as the charging time is not longer than a reasonable stop and the stations are located next to the needed amenities, which is generally the case for Tesla’s Supercharger network, you are going to have a seamless experience.

Tesla’s leading DC fast-charging capability combined with the extensive Supercharger network makes its electric vehicles as good or even better than gasoline cars for long-distance travel.

Then you add Autopilot to the mix and Tesla’s vehicles blow everything else out of the water. 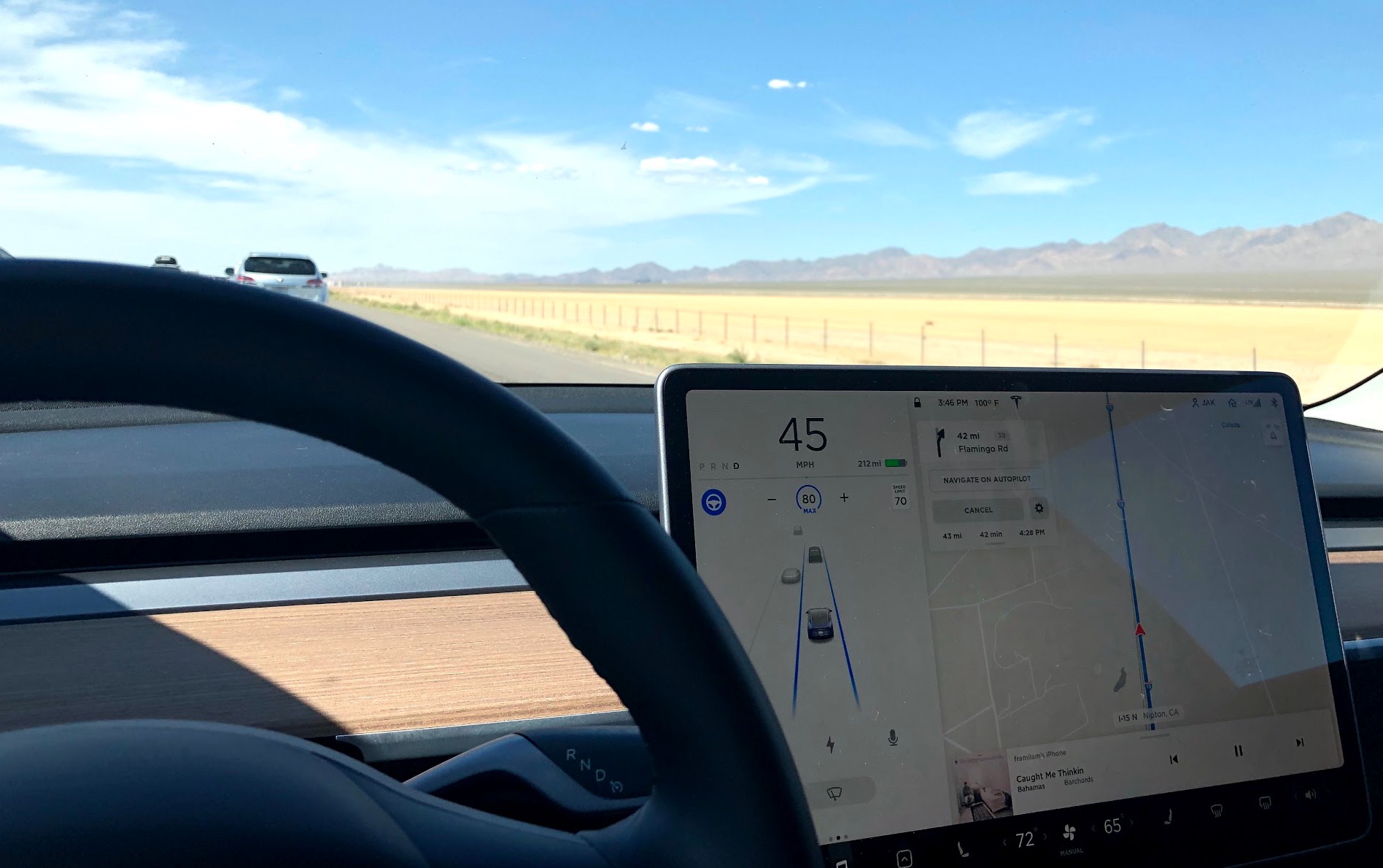 I had put thousands of miles and dozens of hours on Autopilot before this trip and I liked it, but you really appreciate it more than ever when you drive for almost 5 hours straight.

Of course, you still have to keep your hands on the wheel and pay attention at all time, but Autosteer and Traffic-Aware Cruise Control really remove a lot of the stress out of driving, especially in stop and go traffic, which we hit a bunch of times.

I did have to intervene about 10 times in 600 miles, but it was never scary – aside from the tire, but that wasn’t Autopilot’s fault since I was ready to intervene and I couldn’t do it either.

Although it would be nice for Autopilot to eventually be able to detect and react safely to debris on the road.

We are not quite there yet, but I grow more impressed by Autopilot after every few updates. I still think that full self-driving by the end of next year is too ambitious, but I can see how it’s not too far away either.

In short, take a Model 3 on a road trip. You won’t regret it.