The EPA rating for the new Porsche Taycan Turbo S has been posted to fueleconomy.gov, and the results aren’t all that pretty. The Taycan is rated at just 68 MPGe with 192 miles of range, despite the car’s large 93 kWh battery.

While not a big drop from the Taycan Turbo, the Taycan Turbo S and its higher power delivery resulted in 1 less MPGe, and 9 miles less range than the Turbo’s 69 MPGe and 201 miles.

The Porsche Taycan Turbo S’s low efficiency is not unexpected. The Turbo S is more powerful than the Turbo, so we figured it would be a little less efficient.

This rating puts the car at the bottom of the heap for current electric vehicle efficiency. It is the least-efficient electric vehicle currently available in the US, taking the spot previously held by the Taycan Turbo. It is less efficient than large electric SUV/crossovers like the Audi e-tron and Tesla Model X.

Porsche has not yet released figures for the entry-level Taycan 4S, but we expect it to have higher efficiency. That car will have two battery pack options: a smaller 79 kWh pack or the same 93 kWh pack as the Turbo models.

Here’s a comparison of the figures for the Turbo S and the Turbo, direct from fueleconomy.gov: 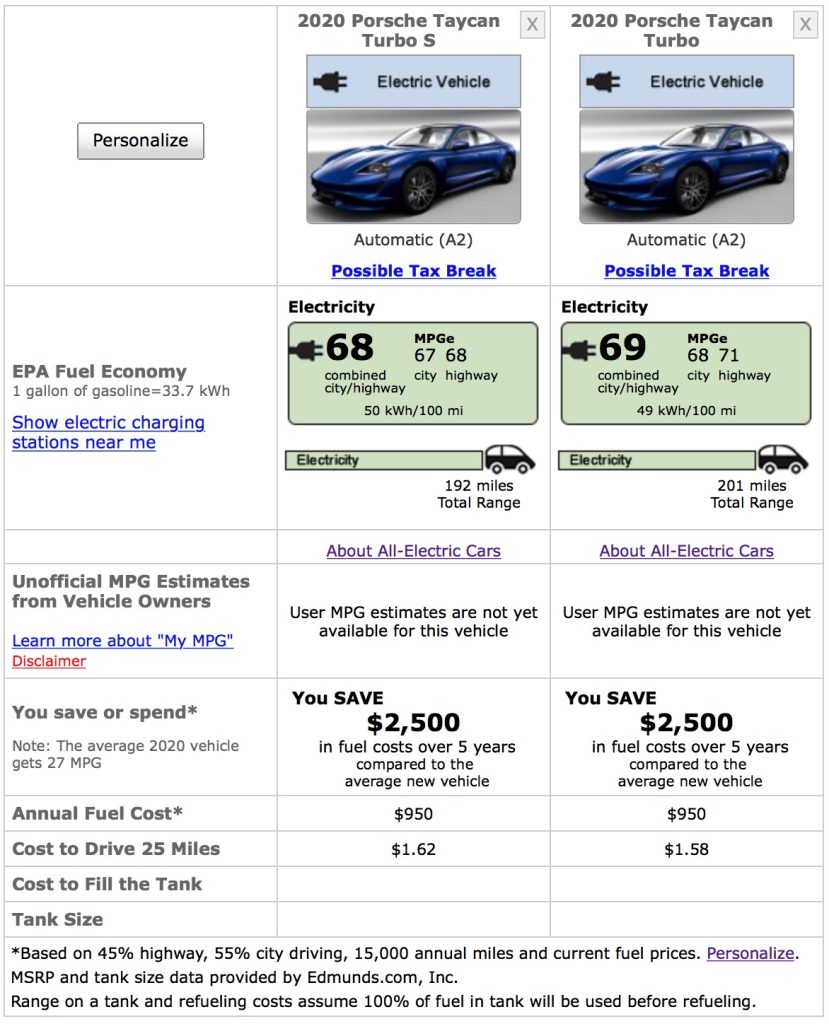 The Taycan’s saving grace may be that it underestimates its own efficiency/range. We heard not long ago from the first US Taycan owner who says that the Taycan’s EPA range is highly conservative. He was able to get much more efficiency out of the vehicle than EPA ratings suggest, even in cold conditions and “spirited driving.”

It’s possible that Porsche has de-rated its car for the purpose of making it easier for drivers to hit or beat EPA estimates. But this is just one report, and we at Electrek don’t have any personal experience with the car ourselves, so we cannot confirm this is the case (hint hint, Porsche).

On the one hand, this doesn’t really matter too much.  I’ve long been on the record that range is actually one of the less important stats of an EV for most drivers.

For the most part, modern EVs are going to be able to go as far as you need them to go. For the few times you do need to go further than their single-charge range, quick chargers now exist on most routes that allow you to get back on the road after the short break from driving (for food, restroom, etc.), which you were likely going to take anyway.

This is why we recently said Tesla Model 3 is the best road trip car. And the Porsche Taycan won’t be far behind it, since the Taycan currently has the fastest kW charge rate of any EV on the market.

And Porsche’s low efficiency means that even with that faster charge rate, it’s actually slower at charging on a per-minute basis than Teslas.

So the problem here is more with efficiency rather than range. The range will be fine for the vast majority of drivers — particularly since it’s likely that most drivers buying a $150k+ car will have access to another vehicle if the Taycan’s range doesn’t meet their needs for the day.

But if you spend $150k on a car, wouldn’t you want to drive it? Surely a powerful vehicle like this would want to see some track days, some Autobahn driving, some roadtripping. A low range, coupled with low efficiency and thus longer charge times, will make this car less usable for those purposes.

The problem is that low efficiency is bad for all aspects of vehicle dynamics. If a car is less able to convert onboard energy into power effectively, this means you need more onboard energy, which means more weight, which makes the car perform worse in all ways. And more weight just compounds the problem, making the car more inefficient as well.

But as stated above, perhaps it’s not as bad as these numbers suggest. Perhaps Porsche is fiddling with the numbers so owners will be pleasantly surprised that they’re able to meet or get close to EPA range numbers even in spirited driving or light track use, rather than feeling like they need to drive in a more sedate manner to get their stated range. Tesla did something similar with early Model 3s, so it’s not unheard of.

But even if they’re holding back by 10%-20%, they’ve still made a much less efficient car than the competition, which is disappointing.