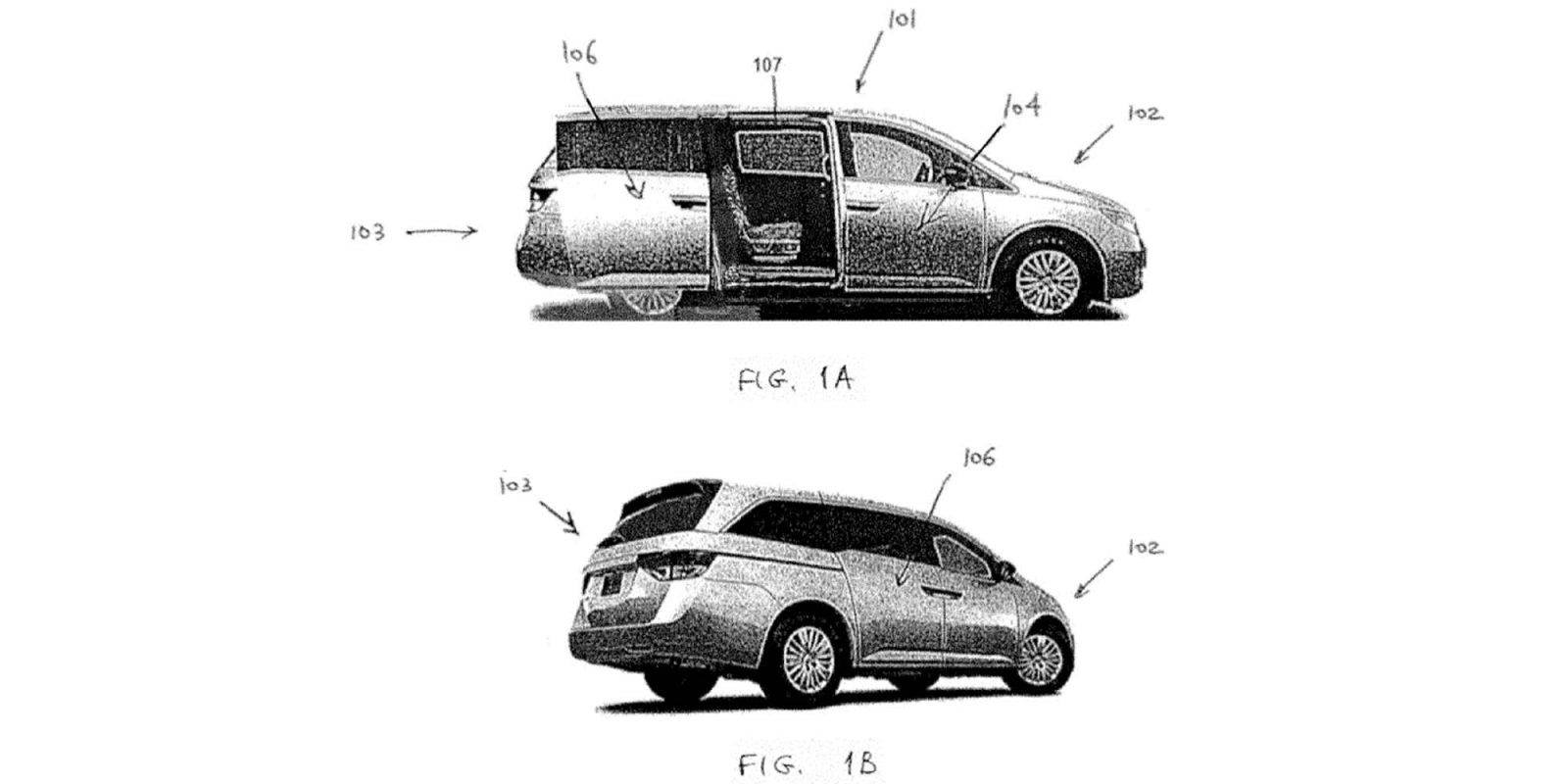 Images discovered by a member of Rivian Forums show Rivian has filed a patent with the US Patent and Trademark office for a sliding door on a dual-guide-rail. Interestingly enough, the images in the patent show the door on a minivan-style vehicle. Before speculation runs rampant, we want to point out that this patent is one of hundreds filed by the automaker and likely does not allude to a future Rivian minivan. However, it does present a growing niche Rivian would be well suited to fill.

Rivian is an American EV manufacturer that has just begun rolling customer versions of its R1T pickup off its assembly line in Normal, IL.

With the R1T deliveries to be followed by the R1S SUV later this year, Rivian is poised to make a splash in the EV market ahead of a recently announced IPO valued at $80 billion

The automaker has garnered such a high initial price thanks to some major financial backing from other US companies like Ford, taking in over $10 billion in investments the last decade.

Additionally, Rivian struck a deal with Amazon to provide commercial EVs to support deliveries. The electric van was the first Rivian EV to hit roads ahead of the aforementioned passenger vehicles.

Previously, we’ve followed the patent movements of Rivian and have found some Easter eggs of future innovations.

Now, however, we have a glimpse at a new patent filed by Rivian that features images of a minivan. That being said, the minivan shouldn’t be the focus of this patent… at least not the one shown.

Rivian patent shows a minivan, could an “adventure” variation work?

A post to the Rivian Forums by member kanundrum showed a new patent was filed by Rivian on May 3rd, 2020 that describes “an automotive vehicle sliding door with dual-guide-rail.”

The images of this dual-guide-rail system show it implemented on what appears to be a minivan, sort of resembling a Honda Odyssey… definitely not reminiscent of Rivian’s unique styling.

The Rivian patent filing describes the minivan as “an illustrative automotive vehicle.” A description of the actual sliding door system is explained further in the patent summary:

Essentially, this is a patent for a unique sliding door that can slide open completely on a smaller rail footprint. At this point, unfortunately, the rail system is the star here, not a potential Rivian minivan.

Now, that we’ve cleared that up, let’s discuss why another take on the Rivian van makes more sense.

It’s probably not a minivan, but a camping van makes a lot of sense

Odds are, Rivian found a great idea for a door mechanism from one of its engineers, and patented it last year. That’s not uncommon. A door mechanism like this is also appropriately demonstrated on a minivan-size vehicle–as it is smaller than say, a Rivian delivery van, and has less surface area for a door rail.

Considering the minivan appears to be fading from market existence to make way for crossover SUVs or compact SUVs (CUVs), a minivan doesn’t quite make sense for Rivian.

An electric camper van, however, would make for a much better option for a number of reasons. First, Rivian already has experience developing, mass producing, and delivering electric vans for Amazon.

It’s not unreasonable to believe the automaker can put a passenger-friendly, aerodynamic top hat on its van platform and sell it to consumers for outdoor activities like camping and cooking.

That brings up the next point, an all-in-one sleeper/camper van is an absolute home run in terms of being on-brand for Rivian.

With the outdoorsy lifestyle already in mind and an “adventure network” of chargers being implemented in all US state parks, a Rivian EV specifically dedicated to the camper/RVer feels right.

Conversions of other commercial vans like Mercedes Sprinters or Dodge Promasters have become quite popular amongst younger generations interesting in living within a smaller footprint and traveling around.

Once again, add Rivian’s electrified know-how and loyalty to luxury outdoors, and you have another perfect match.

With these images, we’re likely not getting the first public glimpse at the next Rivian model. When that EV is inevitably announced, it probably won’t be a minivan. What this patent does provide, however, is a conversation starter about how a newer EV brand could grasp even more of its market.

By bringing luxury and EV performance to the outdoors with the R1T and R1S, Rivian has established its brand identity. Its experience in manufacturing electric vans has already been proven as well.

To combine those two worlds, and create a vehicle that could be profoundly and successfully niche feels like a no-brainer. We shall see.