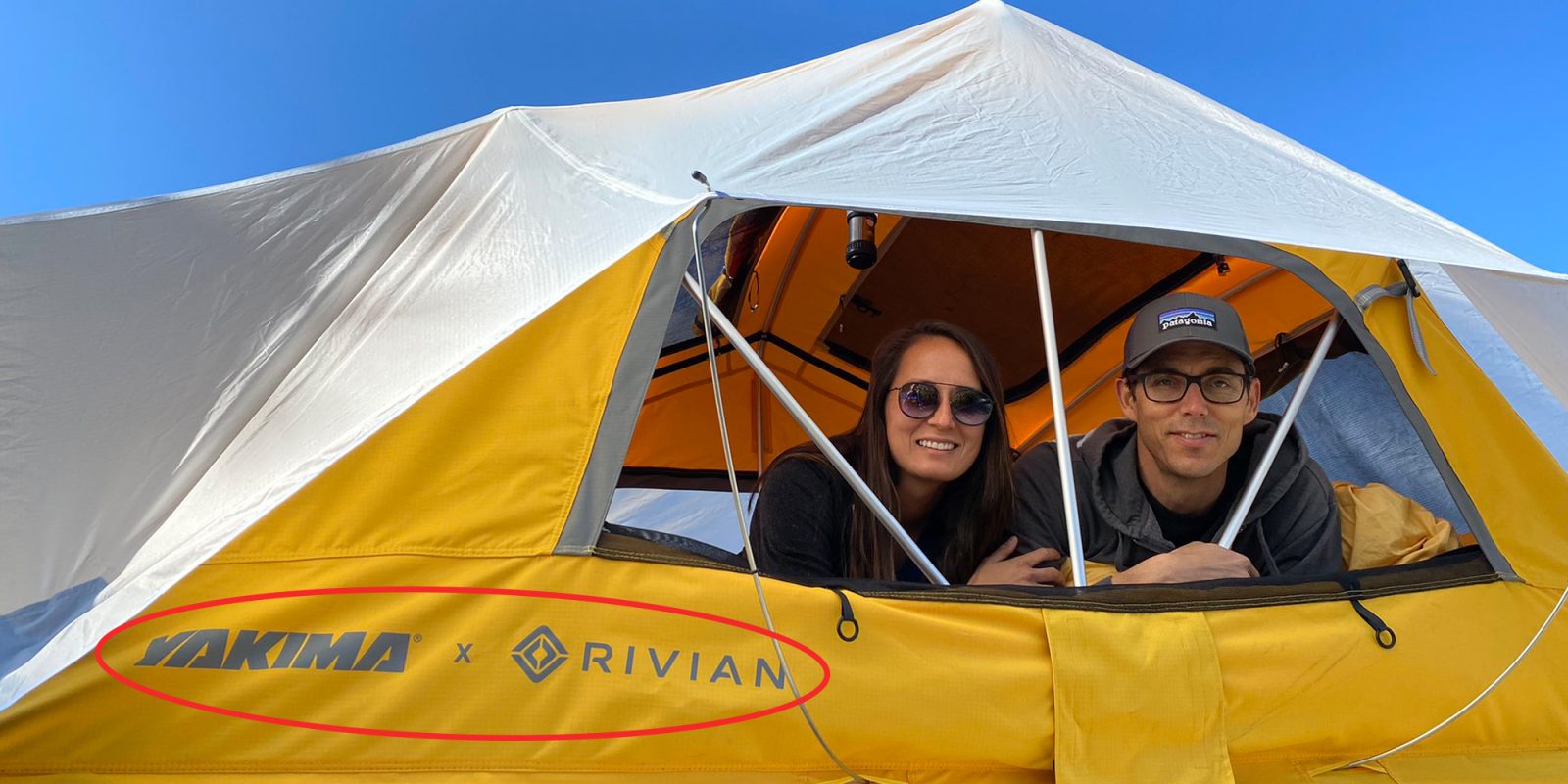 In a Tweet over the weekend, Rivian CEO RJ Scaringe shared images of his family camping in an R1T. From the images, you can clearly see a yellow rooftop tent donning both the Rivian and Yakima logos. The photos confirm at least one Rivian accessory in a partnership with the leading rack manufacturer, Yakima.

Rivian is an American EV automaker just months from delivering one of two flagship vehicles, the R1T pickup. As an entire brand, Rivian is built for the adventurer and outdoors enthusiast. From first glimpses of the R1T and R1S, fans began discussing what campers and outdoors accessories will be compatible.

It seems the automaker is alleviating some shopping for consumers by offering a Rivian yellow rooftop tent manufactured by Yakima. Yakima makes everything from bike racks to roof racks to road showers. As a leading manufacturer in travel solutions, it makes sense for these two companies to team up.

In a Tweet over the weekend, Rivian’s CEO RJ Scaringe shared images of him and his family camping in their front yard in an R1T.

As you can see from the images, RJ is showcasing a Yakima rooftop tent donning a Rivian logo. While the CEO makes no other reference to both brands appearing on the tent, it’s fair to say that a collaboration is in place for at least one product. Given how much innovation Rivian has going on with its two EVs and several more in development, a larger deal would make sense. That being said, no such collaboration has been confirmed yet.

In looking through Yakima’s website, the SkyRise Medium rooftop tent appears to match the Rivian themed tent Scaringe Tweeted. We’ve put them side by side in an image below so you can see for yourself.

The SkyRise currently retails for $1,599 on Yakima’s website. At this point, it is unclear how much this add-on will cost Rivian drivers or when it will become available. As it currently sits, the rooftop tent is not present in Rivian’s vehicle configurator. We have reached out to Rivian for confirmation and more details, but have not heard back yet. We will update this piece as we learn more.

This collaboration (if it is, in fact, one) makes a lot of sense. Yakima is synonymous with racks to support any outdoor hobby, whether it’s snowboarding or fishing. To work with a young automaker in Rivian, built around quality EVs made for the outdoors, could prove wise – especially if it’s just customizing current Yakima products with new colors and Rivian logos.

So far, Rivian’s R1T and R1S EVs have added features that fit the same market as the Yakima rooftop tent (add-ons like the camp kitchen, for example). While the automaker looks to deliver its first vehicles, new customers will immediately start taking them out into the wild.

From there, they will be looking to camp and try out all the intuitive features the EV has to offer. The Yakima tent should help contribute to that experience. No word yet on if the new tent will be compatible with the R1S SUV as well. We’d imagine if the correct roof racks are added to the R1S, it should work just fine. We will know more when we hear back from Rivian, so stay tuned.