New US energy secretary: ‘There’s a bright future for coal’ 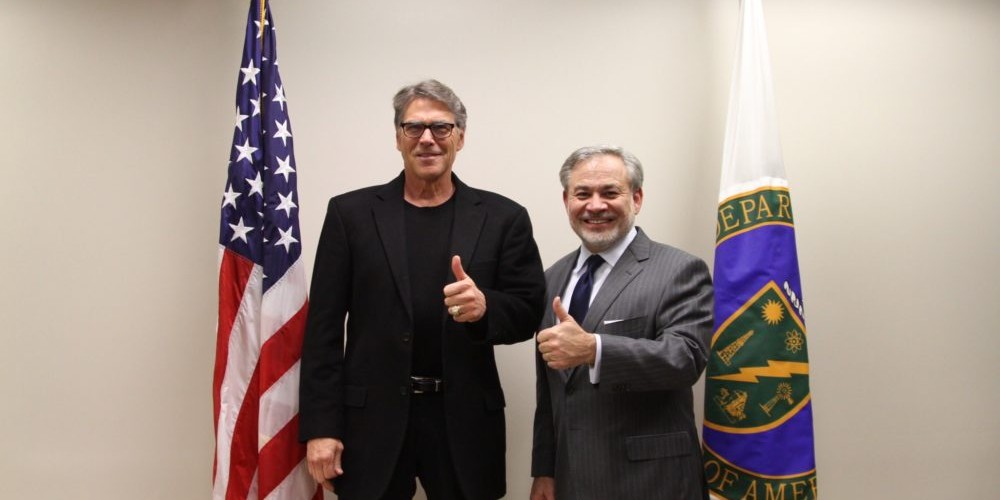 In an interview with the Washington Examiner, Brouillette, who was accompanied by his predecessor, Rick Perry, said, “What the president has directed us to do is to look for different ways to utilize coal.”

The Senate confirmed Brouillette 70-15. He has not yet been sworn in. As Electrek previously reported, Brouillette takes an “all-of-the-above” approach to energy. He actively supports green energy such as solar, but he also still backs fossil fuels.

Perry resigned amid questions about whether he was involved in the withholding of military aid for Ukraine, as part of the impeachment inquiry.

When Josh Siegel, an energy and environment reporter at the Examiner, asked Perry and Brouillette about the fact that coal is rapidly declining in the market, Brouillette replied:

There are other uses for this product in the marketplace today. We can make carbon from it, we can extract rare earth metals from it. We can look at the residue, for instance, from coal ash, and pull out critical materials for battery storage. There’s a bright future for coal, we’re just going to continue to develop it as it goes along.

The Examiner points out that “more coal plants shuttered in Trump’s first two years than were retired during Barack Obama’s first term.”

The Federal Energy Regulatory Commission spiked a proposal from Perry that would have mandated higher electricity prices for coal. The proposal would have increased revenue for coal plants that kept at least 90 days of fuel on site, in an effort to shore up the electric supply.

The plan was roundly criticized as a politically motivated effort to benefit industries favored by the Trump administration that would raise electricity costs by as much as $11.8 billion.

As I’ve cited before, my colleague Jameson Dow wrote after Perry announced his resignation:

We were indeed hoping for that — and that’s not going to happen. Brouillette’s comments about coal are not only disappointing, they’re infuriating. They’re also baffling. A “bright future for coal”? Does he pay any attention to current events?

And yesterday, the United Nations Secretary-General António Guterres stated that the world’s largest emitters are not pulling their weight — on the same day that Brouillette cheerfully explained his coal alchemy ideas. Guterres sure got that right about the US’s incoming Department of Energy head.

Brouillette has made it clear that even though he doesn’t intend to subsidize coal, he also has no intention of abandoning it, either. He just keeps citing “different technologies” like carbon capture.

Despite this claimed intent not to subsidize coal, he has not announced any plans to put a price on the external costs that coal foists on all of us. Until those externalities are priced properly, coal will continue to be subsidized as part of the $649 billion yearly subsidy to fossil fuels in the US alone.

Scientists, the United Nations, environmental groups, other heads of state, millions of ordinary people from all over the world… oh, and US voters of both political parties support ceasing the use of fossil fuels as quickly as possible. Heck, even senators Lindsey Graham (R-SC) and Marco Rubio (R-FL) have joined the US Senate’s bipartisan Climate Solutions Caucus.

Millions are striking and marching all over the world, week in and week out, demanding — begging for — action in order to prevent utter global devastation.

Who has to say it before this administration finally listens? Will they ever listen? We are in a climate emergency. It was human activity, and in particular the burning of fossil fuels, that caused this crisis. We have the technology and the science to move to renewable energy.

There is no bright future for coal, Mr. Brouillette, and no matter what Trump’s destructive “American Energy Dominance Plan” states, it certainly isn’t “dominating” anything. Perhaps set an example, instead of trying to “dominate.” Lead into the future, not cling to the past.

Coal kills people, it is extremely costly, and it destroys our planet. We have much cleaner energy alternatives now. Coal is dead. Leave it in the ground.