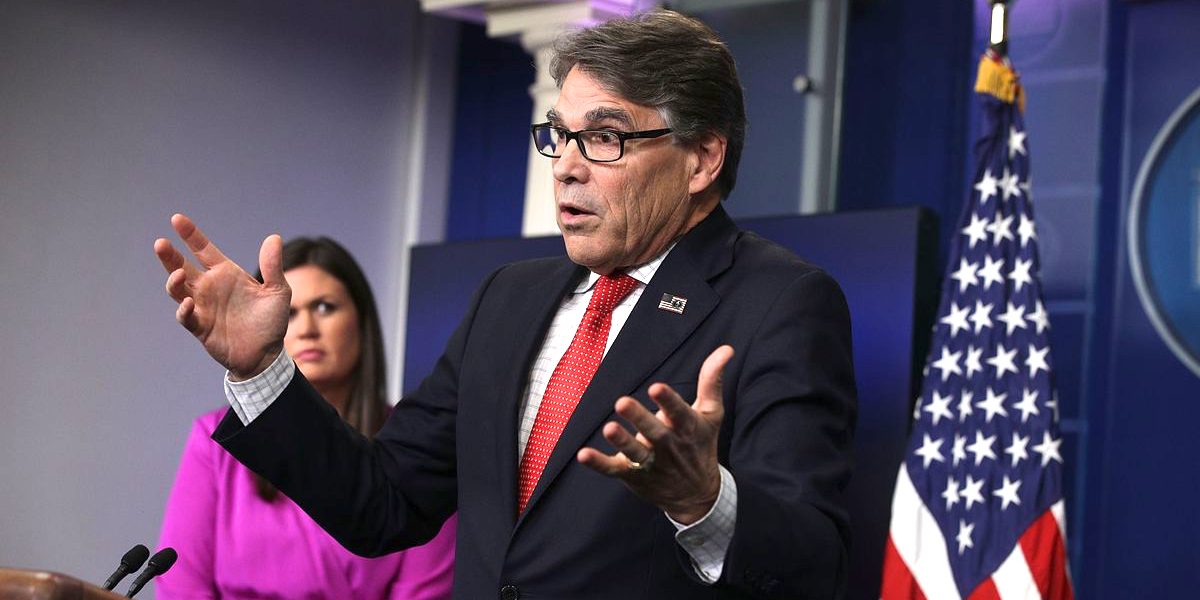 Energy Secretary Rick Perry, a fossil-friendly climate science denier who once pledged to eliminate the Department of Energy entirely, is going to quit his job next month, according to Politico.

Perry will likely be replaced by Deputy Energy Secretary Dan Brouillette, who has previously worked for Ford as a VP of their policy team.

Perry’s actions as energy secretary have largely focused on trying to revive the dying coal industry and stopping the progress of new green energy.

Before he was even hired, Perry pledged to eliminate the entire Department of Energy during presidential debates. This has been a trend in this cabinet, with other heads being nominated to lead departments that they actively want to destroy. Another example is Scott Pruitt, the previous EPA head, who was appointed to a cabinet position he had routinely fought against.

These two cabinet posts worked together to make Americans’ energy dirtier and more expensive by implementing a series of policies to encourage coal over cheaper wind and solar. The EPA finalized a rule that replaced President Barack Obama’s Clean Power Plan with one favored by Mr Trump that emphasizes coal.

Separately, Perry, as DoE head, tried to push through a massive additional subsidy for coal and nuclear, despite estimates showing that plan would kill tens of thousands of Americans. This change was requested by the coal lobby, since new wind and solar are now cheaper than in-place coal plants. And that doesn’t even count the hundreds of billions in subsidy that coal receives from not having to pay for the pollution they cause.

This effort was stopped by the Federal Energy Regulatory Commission after the study Perry used to support his claims was found to be lacking veracity. After the fact, Brouilette, Perry’s replacement, said that the DoE’s effort was not serious to begin with.

And Perry has even gone so far as to state that fossil fuels prevent sexual assault.

So Rick Perry has been no friend to clean energy or the health and wellbeing (and wallets) of the American people, even though he did recently offer an olive branch to discussion about the Green New Deal… while speaking at an oil and gas conference.

But his resignation may not be related to how poorly he has performed as Secretary of Energy, but rather to the Ukraine controversy that has led to the impeachment inquiry. Perry has spent a lot of time in Eastern Europe, working on liquified natural gas exports to the region (which his DoE called “US molecules of freedom“).

In May, Perry led a delegation to Ukraine to meet with their new president, Volodymyr Zelensky, after his inauguration. Zelensky is at the center of the impeachment crisis, since Trump admitted to calling Zelensky for help with influencing the 2020 US election.

Perry supposedly has been planning to exit the department for “several months,” but the timing of this news presents an interesting coincidence, at the very least.

Apparently this administration had one reality-TV washout too many, and Perry had to make room for his bombastic D-list celebrity boss. We can’t say we’re sorry to see him go. And we’re glad that the Department he and his fake glasses pledged to shut down has outlasted him, as we always knew it would.

His replacement, Dan Brouillette, doesn’t seem particularly worse, as best we can tell. He seems to toe the party line on the DoE’s current policies, which is unfortunate, and being involved in the auto industry with Ford for a few years is at least tangential to issues that are related to energy. He was also involved in the DoE from 2001-2003, under George W. Bush, who was also famously pro-fossil fuels. 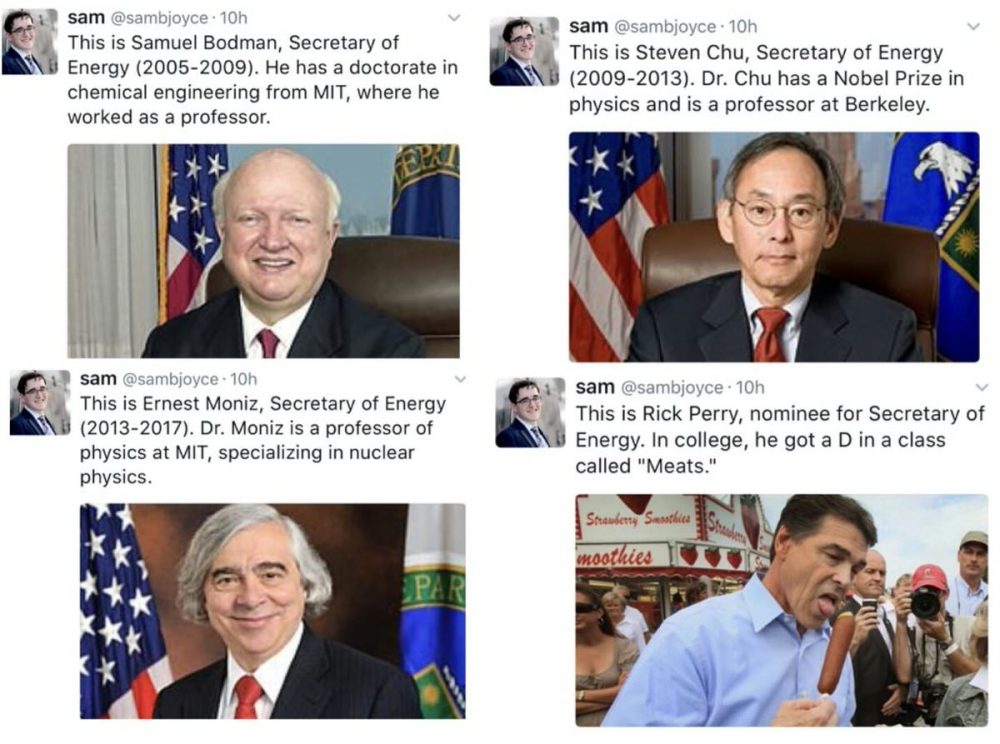 Brouillette may not be a Nobel Prize winner or professor of nuclear physics, like the 3 DoE heads previous to Perry were, but at least he didn’t get a “D” in a class called “meats” in college like the current energy secretary did. And maybe at least he’ll realize ahead of time that he’s going to be the one responsible for managing America’s nuclear arsenal, instead of learning about it on the first day of the job like Perry did.

But like the situation at the EPA, removing one terrible boss may not fix everything. Pruitt was horrid, but at least his corruption was publicly obvious, restricting some of his more dangerous intents. When he was replaced by Andrew Wheeler, a coal lobbyist who is a bit more savvy than Pruitt, the ridiculous public corruption became less visible, but the dangerous cause stayed the same.

Worryingly on this front, in the same interview linked above, Brouilette suggested that energy policy should not be “dictated” by science but rather by “dominance.”