Ford’s Mustang Mach E electric crossover SUV gets unveiled tonight in Los Angeles, in advance of the LA Auto Show.  Electrek is at the event and will bring you full coverage of everything you need to know about the car here.

Update: Find all our articles with impressions from the Mach E reveal here, then look below for more on the event/stream itself. 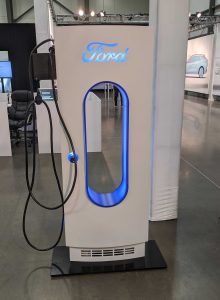 While we already know most of the Mustang Mach E’s specs due to a leak on Ford’s website on Thursday, we’re bound to find out some new things at the event.

The Mach E will have estimated 0-60 performance of between ~3-6 seconds depending on options, and Ford is targeting 230-300 miles of all-electric range.  It will charge at a max rate of ~47 miles every 10 minutes on a 150kW DC charger.

We also know what the car will look like.  After test mules, then renders, then spy shots, Ford’s website leak finally showed us a true look at the car without camouflage and we’ve even seen some real life photos screengrabbed from a leaked press video.

There are a few remaining questions, though: how big is the Mustang Mach E, compared to other crossover SUVs?  How efficient is it, and what exactly is the charge rate?  Will the interface allow for Apple CarPlay and Android Auto?  And finally, where the heck are the door handles?

These questions and more will be answered tonight, in Ford’s livestream which you can view here.  It goes live at 5:50pm PST/8:50EST:

We’ll be following along with the livestream and updating this page with anything interesting that happens in the stream or at the event.  Reload this page for more information as the event unfolds, or follow us on twitter for updates and instagram for live stories/video:

We are live from the Mustang Mach E event launch in Tesla's literal back yard. Don't forget to follow us on Instagram for live images and video from the show. https://t.co/0zD5SvtlM2 pic.twitter.com/uLRhQrffd5

Ford is finally taking electric seriously, and seems to be doing it in a big way.  The Mach E is one of the few cars designed from the ground up with specs that look like they challenge Tesla directly with a quick, capable, well-designed electric vehicle at a reasonable price and launching into the same market at roughly the same time.  We’re super excited to see how this all turns out.

What do you think about the Mustang Mach E so far?  Let us know in the comments below throughout the day and as the stream goes live.

Update – Also check out Seth’s first ride video in the Mach E, after the event.  In the video you can hear the fake engine noise which Ford has added to play through the internal speakers: