The massive global transition to electric vehicles entered a new phase 30 minutes ago. That’s when Ford unveiled its Mustang Mach-E all-electric SUV. The significance of the moment has little to do with a high-tech breakthrough or stroke of innovation. That was already achieved by a pioneering Silicon Valley EV company. What happened in Los Angeles tonight was a cultural leap of EV technology from early-adopting, high-tech elite drivers – to the heart of America. The big shift comes down to one word: Mustang.

There is simply no American automotive brand name that carries as much recognition and passion as the Ford Mustang. By using that name, Ford just broke down the hesitation of millions of Americans who have resisted EVs as impractical and unattainable cars only driven by wealthy West Coasters.

It was a ballsy move by Ford. But it put pressure on the company to deliver a vehicle deserving of the Mustang name – or else dilute the value of the priceless Mustang heritage and brand. 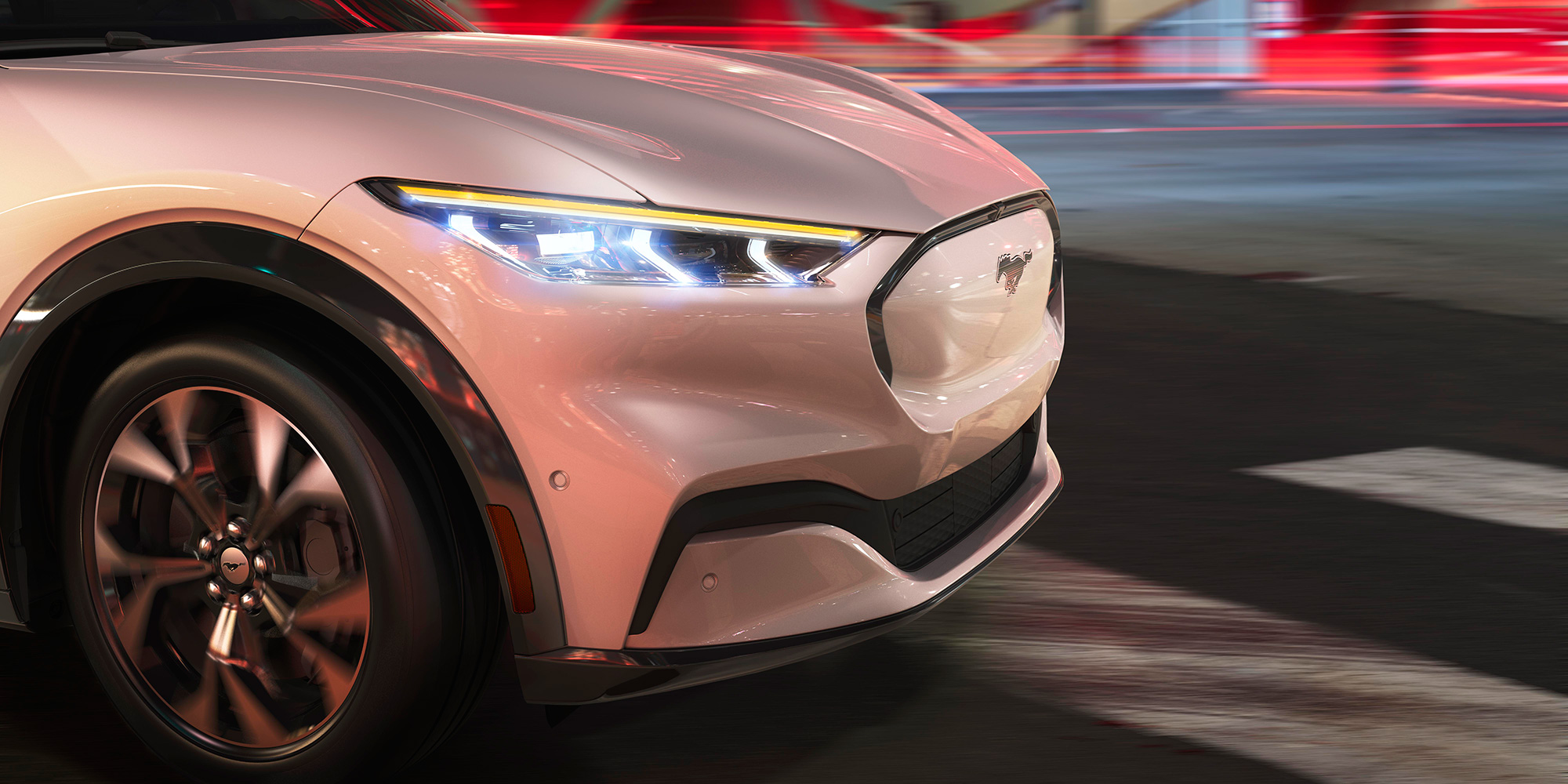 Gordon Platto, Ford’s design director, explained the challenges to us:

Platto admits that halfway through the project, the design was falling short. The team looked at sketches and models and — appropriating a term used by EV advocates — declared it a “compliance vehicle.” Platto said, “That’s when we decided to pivot” and “make changes not just to the appearance but the architecture as well.” 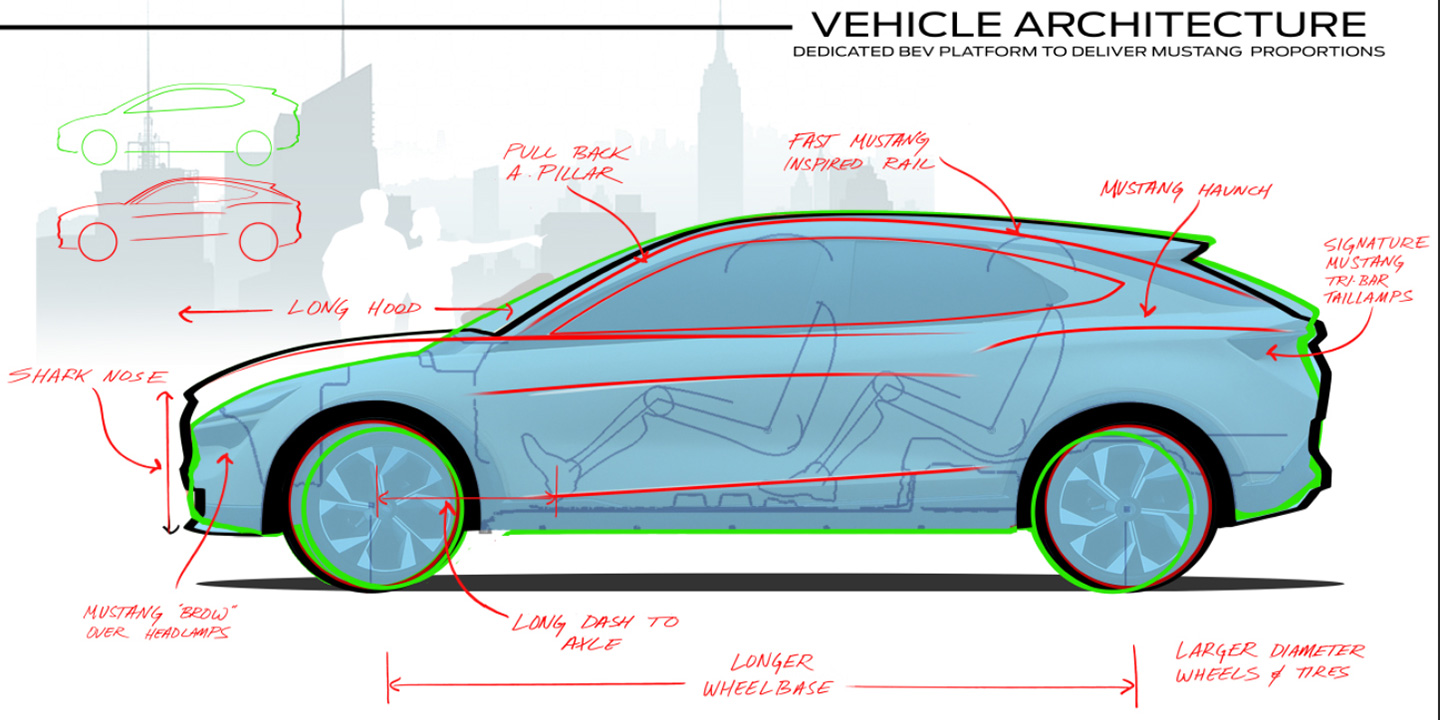 The A-pillar was pulled back, and the long hood was extended to create a shark nose. The sweeping roof rail was better defined by a blackened top. The rear haunches gained heft. The interior dash got a double-brow that dips in the middle. And critically, the tail lamps took on a bolder treatment of the Mustang’s classic tri-bar design. The SUV weighs in at a relatively svelte 4,800 pounds.

What resulted was a vehicle, electric or not, that any red-blooded, Mustang-loving American would proudly display in the driveway. Many of those same auto enthusiasts would previously not be caught dead in an EV. 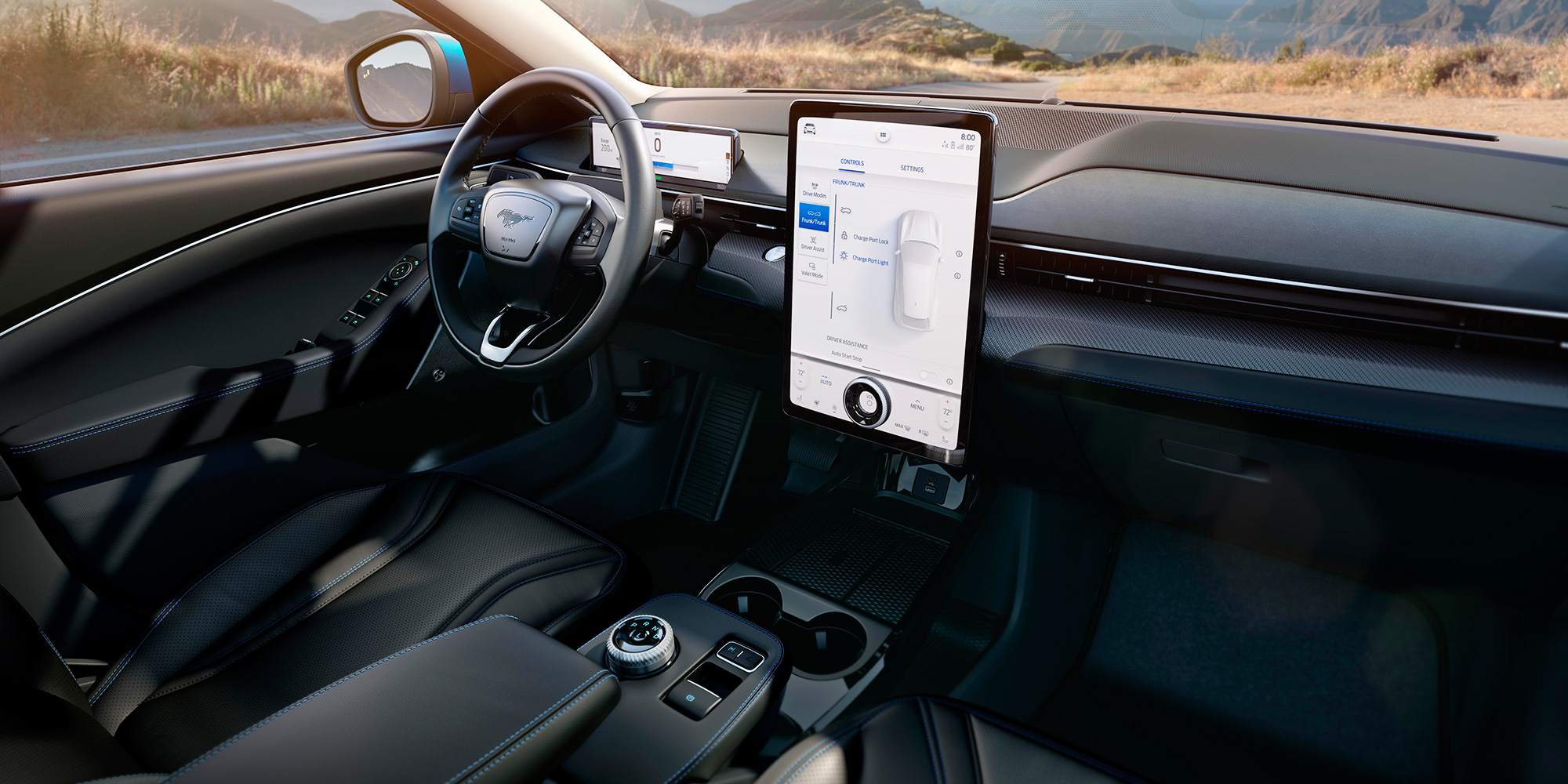 Ford engineers also went back to the drawing board to create the Mustang Mach-E’s technical architecture.

Anand Sankaran, director of electrified powertrain engineering, said, “To really call it a Mustang-inspired vehicle, we had to change the proportions by redesigning the batteries, the motors, everything.” All new software was written for motor and battery controls.

Then Ford designed and built the most powerful electric motors in its history. “To give you an idea, the Focus Electric had a 110-kilowatt motor,” Sankaran said. “The one in the Mach-E is a 210-kilowatt motor.” When you put two of them together, as will happen in the Mach-E GT version, the vehicle will deliver 459 horsepower and reach 60 miles per hour in just over three seconds.

Ford’s engineers, designers, charging specialists, and go-to-market folks – many of them relatively new to the EV game – benchmarked the Mach-E against the EV pioneers. “We looked at all of Tesla’s products,” said Sankaran. “We looked at the Audi E-Tron and Jaguar I-Pace. We opened them all up and looked at everything.” 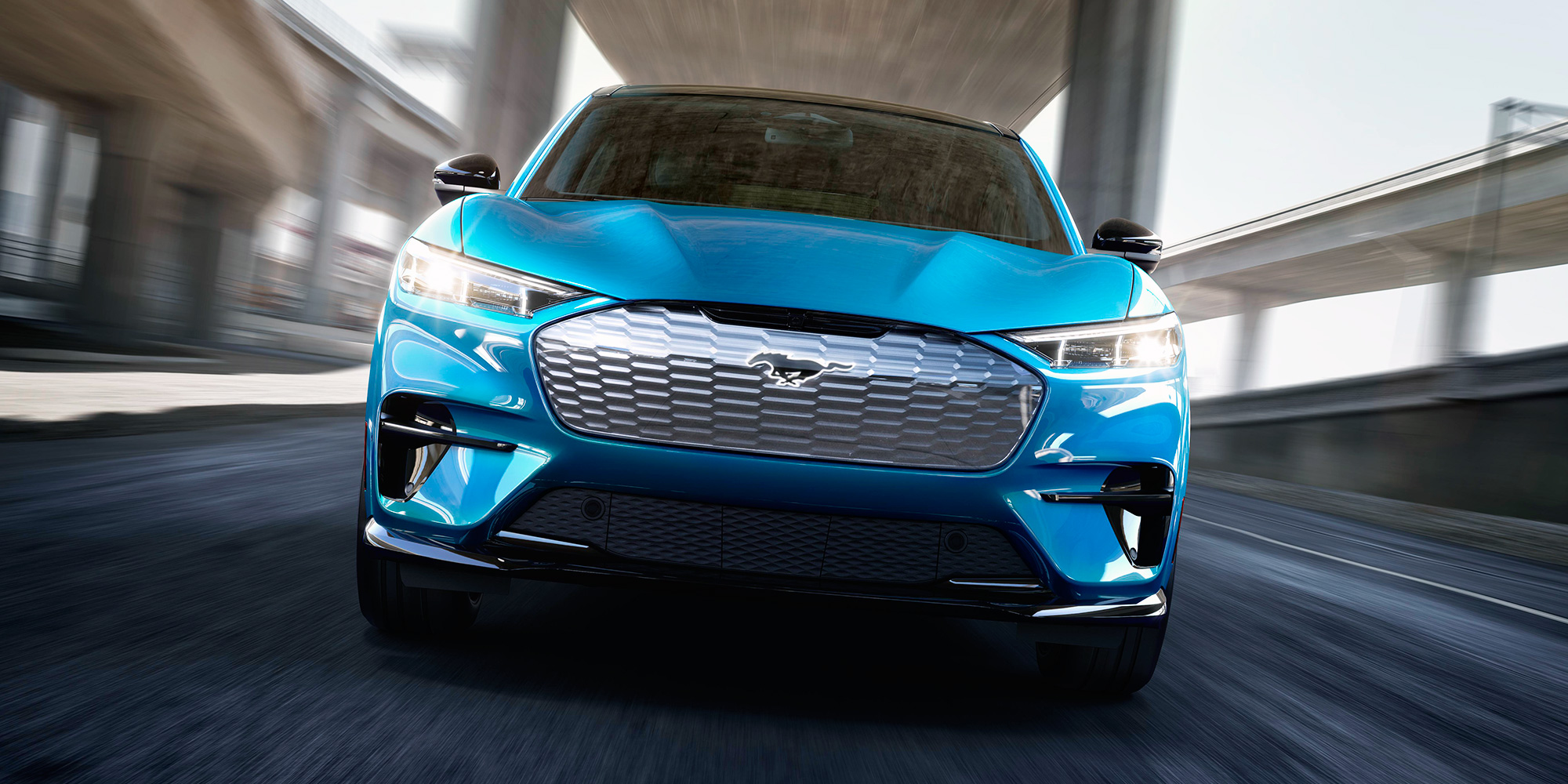 I asked if the production-ready Mach-E will beat the competition. “Absolutely,” said Sankaran without hesitation.

On my short test ride in the extended-range, rear-wheel-drive version, there was plenty of torque. However, I was not thrown back in my seat as I would be in a Tesla Performance car. The test car was only halfway through development for calibration and tuning. So I’ll reserve judgment on performance when I get behind the wheel of the production vehicle, choose its “Unbridled” mode, and stomp on the go-pedal. (We heard a rumor that Ford had a “Stampede” mode in the works.)

I could only glean so much information from the back seat. Although I was pleasantly surprised by how much head- and leg-room was granted for my 6’4” frame in the back row.

But I’m almost certain that it will have all the quietness, superb handling, and get-up-and-go that the best EVs have. Let’s face it. The Mustang Mach-E gets those benefits strictly by making it an electric vehicle. All EV-makers use the same special sauce: batteries slung low beneath the cabin and powerful electric motors.

As Sam Abuelsamid, a researcher at Navigant, told me after his test-ride, “There is only so much you can do with an EV.” Thankfully, Ford used the tried-and-true formula and infused it with Mustang DNA. Among the things Ford got right was long range – from 210 to 300 miles depending on pack sizes of 75.7 kWh and 98.8 kWh. The onboard charger is rated at 10.5 kilowatts. There’s an entry-level price of $43,895 before incentives.

Yes, perhaps Ford made a few small slip-ups, like the odd one-button door-pulls (especially when there’ nothing to grab in the back row). And inserting a big audio-volume button directly into the 15.5-inch center dashboard screen seems awkward. And it’s a bad idea to overpromise useful digital services for the patchwork of highway charging stations (that will remain years behind the Tesla Supercharger network). 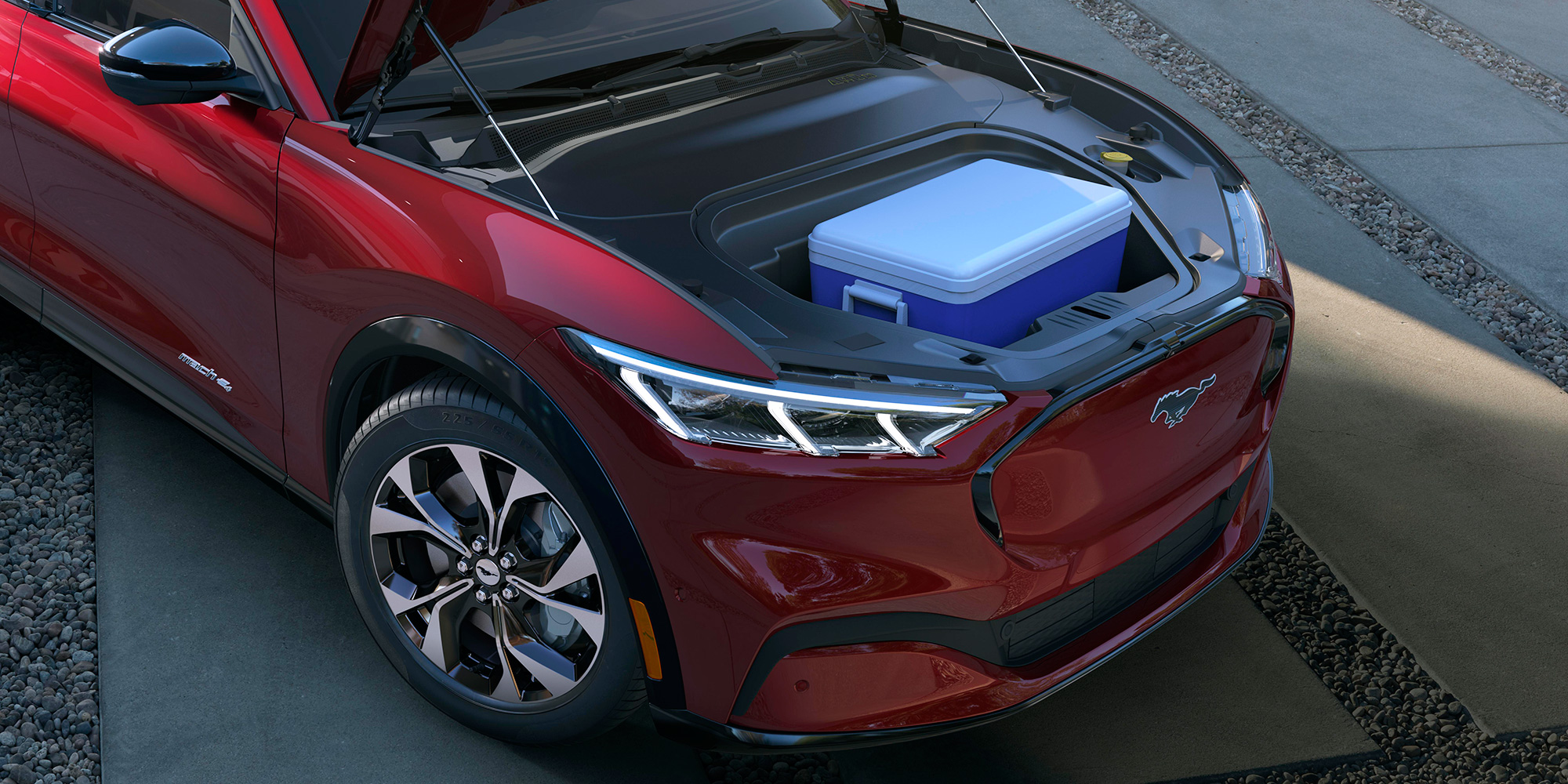 We can also debate how cool or corny it was that Ford took the Mach-E’s frunk with 4.8 cubic feet of storage space – and made it drainable and washable for use as a mobile ice chest for picnics, games, and trips to the beach. I like it and can’t wait to see owners posting images of frunk-gating parties.

I’m sure we’ll have long and excruciating debates about the crazy long list of choices and specs in the weeks and months leading to the first sales in late 2020. 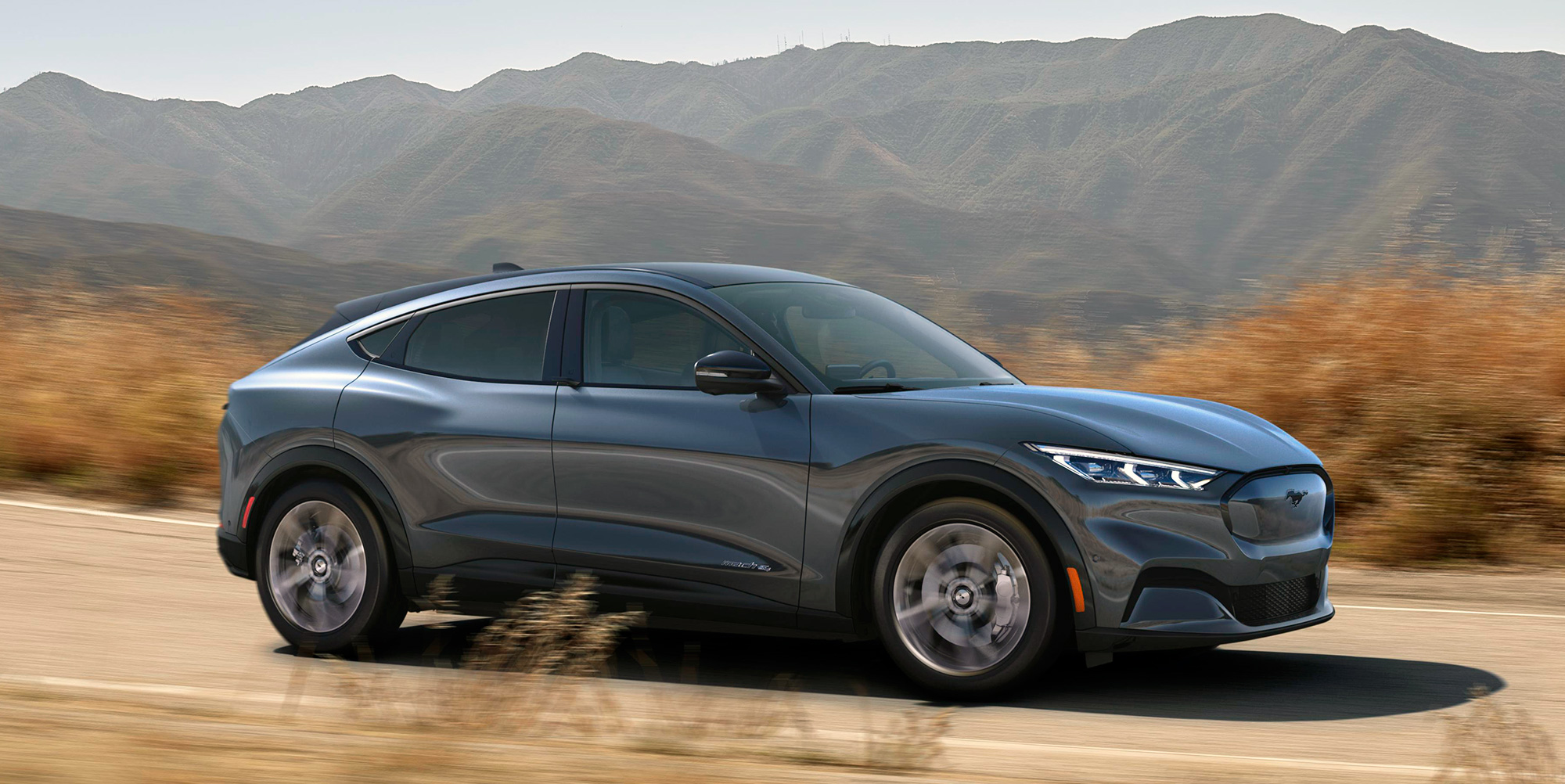 But let’s not lose sight of what happened tonight. The center of gravity of the EV market in the United States just shifted east. There’s a big, gorgeous, powerful, long-range, all-electric, all-American Mustang SUV coming in less than a year. And it will be followed by a pure electric Ford F-150.

If there was any remaining doubt that electric vehicles are on the way to mainstream adoption, that ended exactly one minute ago. That’s because Ford just opened the Mustang Mach-E reservation site to start taking $500 reservation deposits. Are you signing up?