Minutes after the official unveiling of the Ford Mustang Mach-E, we jumped into the press scrum surrounding Bill Ford. Electrek asked Ford’s chairman, and Henry Ford’s great-grandson, if he knew the introduction was taking place one block from Tesla’s design center. “That’s a coincidence,” he said. And then he flashed a big smile.

The venue for the Mach-E unveiling is a hangar adjacent to where Mr. Musk lands his private jet. Rumors are spreading throughout the building that Mr. Musk is upset that Ford chose the location to unveil the Mustang Mach-E. Multiple sources, including a pilot who flies in and out of the adjacent Hawthorne airport, heard the same reports about Musk’s disapproval.

After the unveiling, I asked Bill Ford about his pledge to make fuel-efficient SUVs more than 15 years ago – and if the all-electric Mustang was finally delivering on the promise.

“First of all, we have made more fuel-efficient SUVs. We have a lot of hybrids, and we did a plug-in hybrid. But in the past, if you wanted performance, you had to give up the green aspects. If you wanted green, you have to give up the other. But this technology has finally gotten us to a place where you can have both. It’s something that I’ve waited for a long, long time. I love this car.”

He explained why the Mustang was the right model to electrify.

“We are choosing to electrify our most iconic nameplate. And that has a couple of benefits. One is it galvanizes our internal team because if we’re going to electrify this and the F-150, they know that they better raise their game and make it perfect. It also signals to the world that we are dead serious about electrification.”

A voice from the crowd asked, “Are you going to take some sales from Tesla?”

Ford replied: “I will take sales from wherever we get them. But this is going to be a really strong entry in the marketplace.” 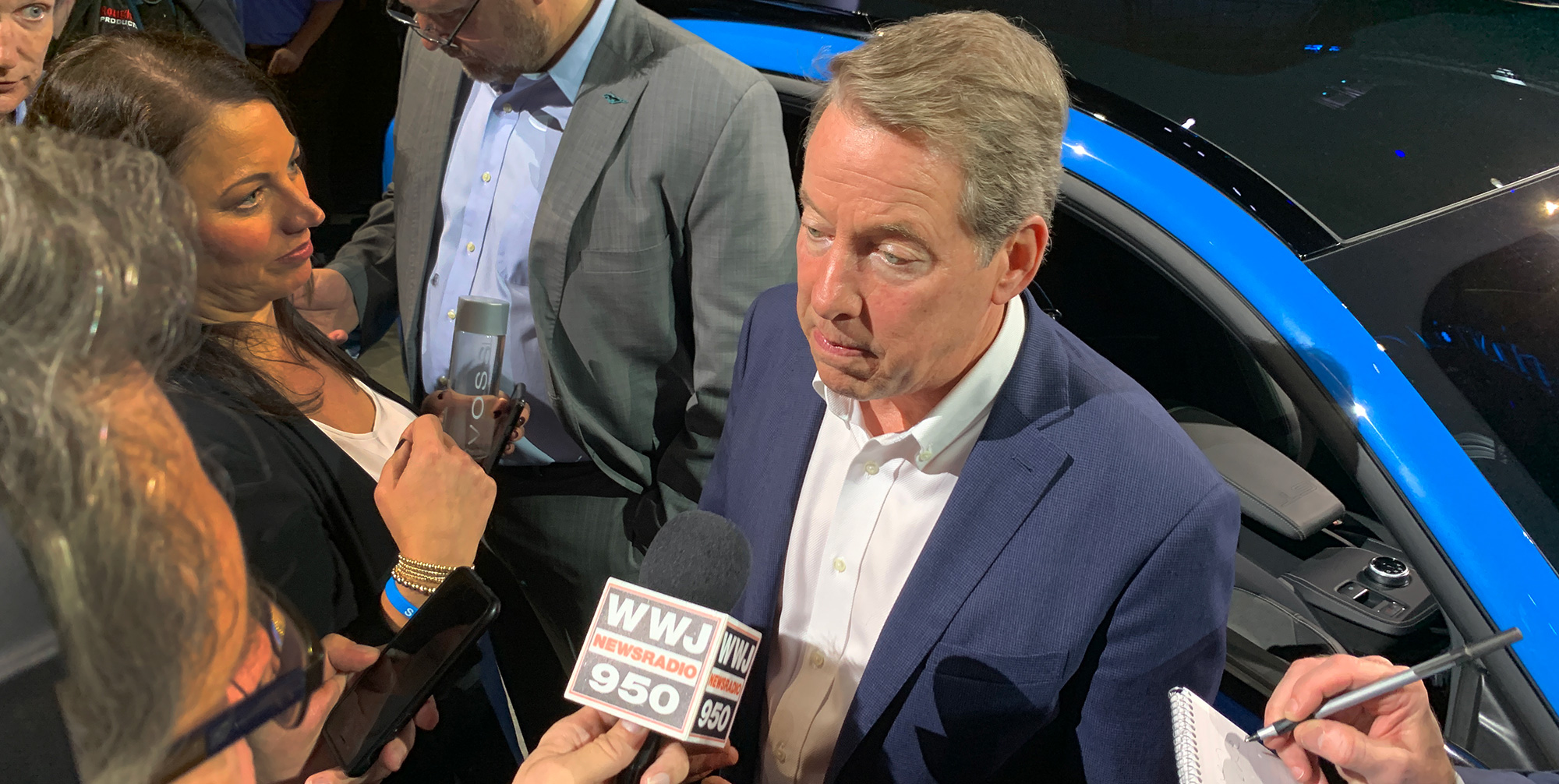 Another voice asked about being in Elon’s backyard for the event. Ford replied, “I didn’t see him in the audience. Is he here?”

Ford added that he felt very good that the Mustang Mach-E would calm any concerns about range anxiety. He pointed to the number of charging stations available to Ford EV drivers. “And obviously range is something that we’re always going to continue to work on,” he said. “But we felt that we kind of hit the sweet spot on this one with the range.”

The Mach-E offers between 210 and 300 miles of range, depending on the trim level.

A reporter asked, “Where do you go from here? Other automakers are developing electric platforms, but you’re taking a multi-prong approach, including a joint venture with Rivian.”

Ford replied, “We can’t do everything ourselves. We’re all in on electrification, and we’re all around the world, so we’re going to go as hard and as fast as we can. One size won’t fit all. You’ll need different approaches. Rivian will obviously be a very different approach for us.”

Another voice from the scrum: “Did you consider doing all-electric two-door Mustang coupe?”