Real World Opinion: Installing Level 2 chargers along roadways is a waste of time

On a recent electric road trip to upstate New York, I realized that, with the cold weather, my snow tires and a car full of kids who like to be warm, I would need over 30 more miles of electricity than my batteries could hold to make it home. Hitting one of Tesla’s speedy Superchargers would require me to veer across the Hudson River twice and add over a half hour to my trip.

Along the fastest route, according to the helpful Plugshare App, there were a few Level 2 charging stations. I can get 30 miles per hour of charge from my default Tesla cable so I figured that I could get most of the extra miles I needed while we stopped for lunch. There was also a highly rated Level 2 charger within a mile of our destination we could use as a backup (it is good to have backups!). I figured we were all set…

We headed up the Taconic Parkway with almost 200 miles of charge in the 3 year old Tesla Model S 60 – We’ve lost about ~10 miles of range in the last few years which is normal and expected but still a bummer. The round trip is 180 miles but we know that with winter conditions, the hilly, curvy nature of the parkway and my unwillingness to hypermile at 50mph, we wouldn’t make it without help.

The first Level 2 charging station on the route was at a TasteNY, a lovely little rest stop that the State of New York builds promoting local farms and businesses. We pulled up (had to back-in because of the short cord, weird config – blech) and began charging while my wife and kids went to get some food. The charger didn’t give me my home 40A rate of 29 miles/hour. Instead I got about half that on the 5kW charger from Eaton. I was only getting about 15 miles per hour of charge. In addition, the Model S, when it starts charging, shows some additional losses because it shaving off some partially used battery. 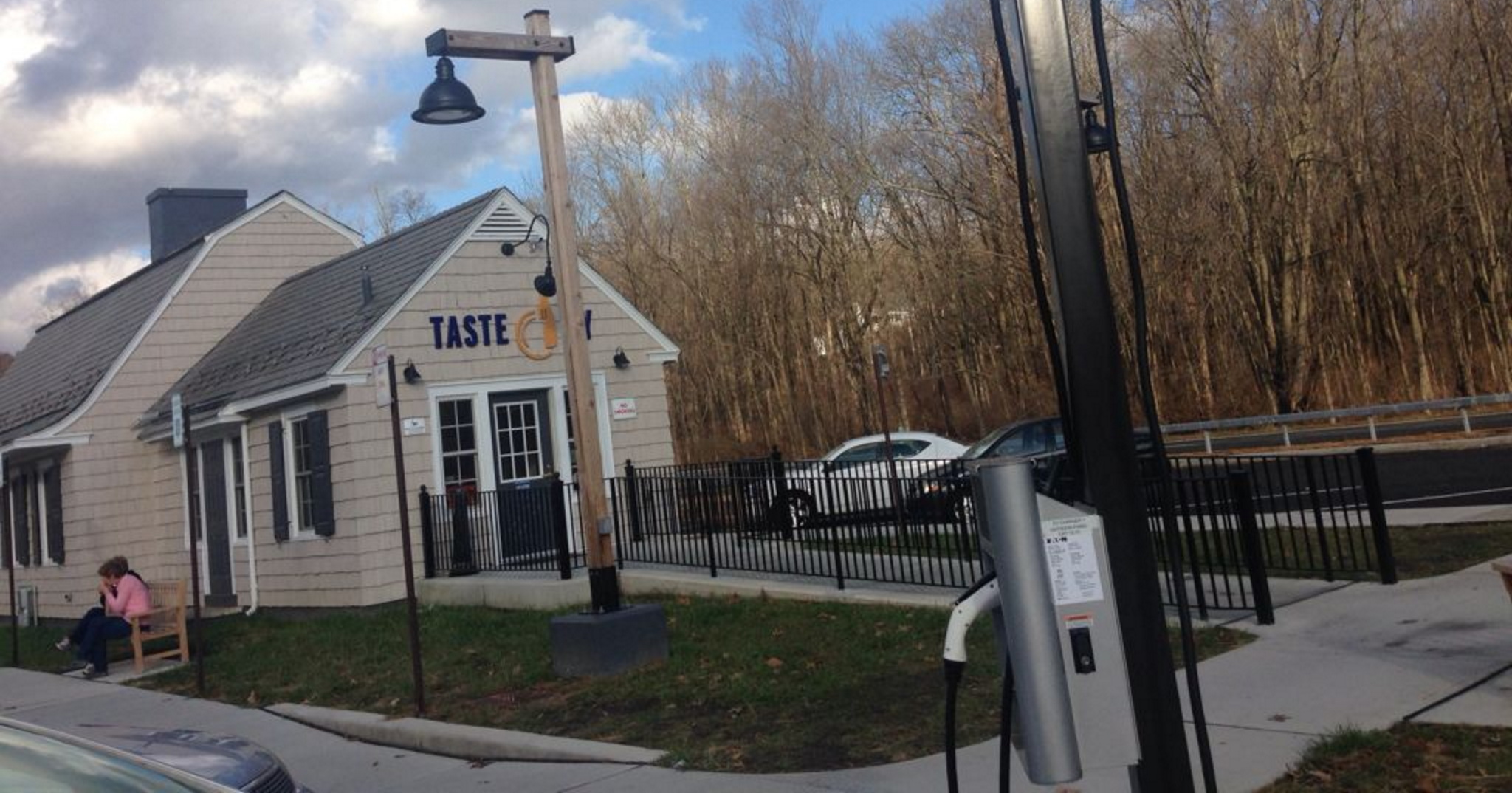 We took our time, ate some lovely overpriced local sandwiches and walked around. I checked the Tesla app often and ached at the painfully slow charge. I broke even after about 12 minutes. When we finished eating 30 minutes later, we had gained a grand total of about 7 miles of range. The kids wanted to go, we had plenty of charge to get to our destination and we had a destination charge lined up.

We passed another Plugshare outlet at a diner on the way up but that was only a level 1 charger which is just an outlet that can be used for car charging. On a Model S, that means 4 miles/hour of charge and is almost always pointless unless you are going overnight…for several nights.

When we got to our destination – Hudson – we headed directly to the Level 2 charging spot.  It was about half a mile downhill from the city center located behind an old warehouse that had been converted into a exhibition space. Although the surroundings were dilapidated, the charger was a new Bosch Level 2. Unfortunately it was only a 30A circuit, meaning we’d get about 22 miles/hour of charge…at best. 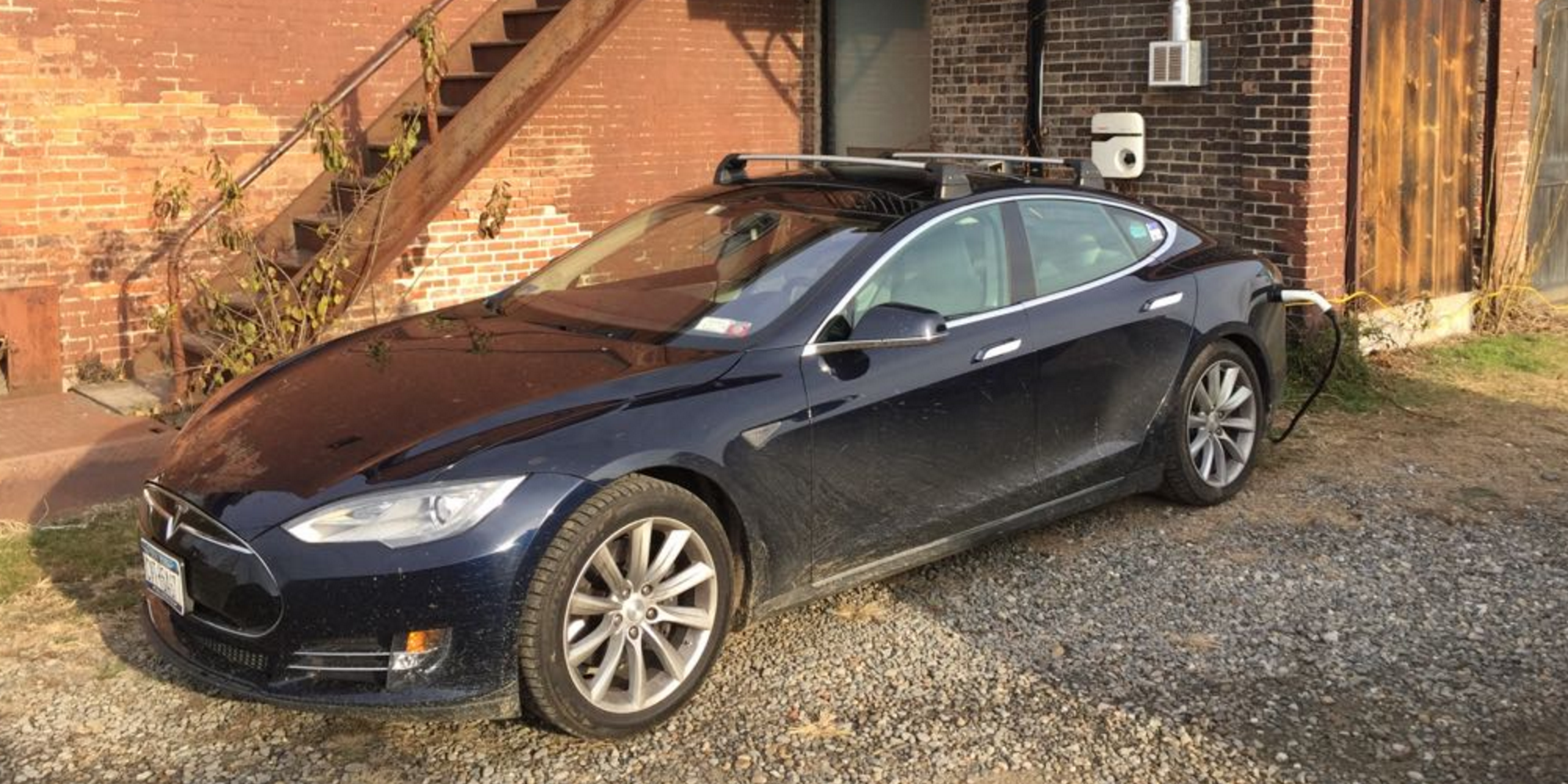 As I always do when we reach a charger, I plugged in right away before even thinking. We sat in the car with the kids and contemplated the one mile walk in the below freezing conditions to/from town with the kids, aged 4 and 7. We decided to hang out for about a half hour in the car preparing for the trip and then drive into town and find parking and start our fun day. With the 10 miles of range added, we had enough charge to reach that Taste New York slow charger again on or way down could theoretically come back to this spot before we went home.

We quickly found charger-less parking and had a fun day/evening in Hudson. There was a Christmas Parade, some nice kid-friendly stores, restaurants and bars. Highly recommended! At about 8PM, as the kids were getting tired, we decided to go home.

There was a third option. Remember that Supercharger on the other side of the Hudson in Newburgh? It was about an extra half hour out of the way (and required a toll road to get there). But we’d only need to spend 10-20 minutes charging to have plenty of charge to get back home.

Weighing our options, the Supercharger seemed like a no brainer and it worked exactly as planned. In fact we stayed an extra 10 minutes (half hour total) and filled up the car – why not, it is free! Tesla Superchargers are typically located near places with activities which is nice.

We ended up at home driving as fast as I wanted with almost 100 miles of charge and 2 sleeping kids. Next time we go to Hudson, we’ll just divert the extra half hour to the Supercharger…unless things change.

Level 2 or lower chargers along roadways are totally pointless. Don’t waste your time, Government entities and do-gooders. Just don’t.  If anything, just make available a 240V 40A NEMA 14-50 outlet for emergencies. Just about everyone who has an EV, carries a charger in their car on trips. In that rare case that someone gets stranded, they can use this plug, which costs about $200 for an electrician to install, and lots of time to get the charge to get to the next destination.

Level 2 chargers at destinations are OK and can still be helpful. But they have to be in high density public places where people park, not off the beaten path which require lots of walking. There has to be 2-3 hours of activity in these kinds of places. Malls with restaurants make some sense. Small town centers with lots of walkable venues work.

Level 3 DC chargers are the future. Even with a baseline of 50kW, the SAE and Chademo offer are worlds better than Level 2 AC charging. 150 miles per hour is a reasonable charge. A half hour meal/bathroom break/ can add an hour of driving. This isn’t perfect but it is a baseline for medium length trips, especially for folks with 80-90 mile batteries (Leaf, Spark, i3, etc). The same trip above could have been done with any of the short range electric cars as long as the driver spent a half hour charging on the way there and back. Not ideal but very doable.

Tesla Level 3 DC Superchargers can charge at up to 135kW which puts over 300 miles/ hour of charge. Tesla is expected to go even higher here but it is already enough to travel easily. Last year, we travelled from New York to Minnesota along the one (not direct) route with Superchargers. It isn’t hard and we made close to the same time as we would have in an ICE car.

But, even with the optimistic Supercharge rollout with often missed expectations, Tesla needs to give us access to more charging stations by providing more reasonable priced or ubiquitous Chademo/SAE adapters.  I can’t drive to Montreal without going way into Vermont. Every ski vacation has to be game-planned.

With the rollout of SAE and Chademo adapters nation/worldwide, I would hope that Tesla makes its Chademo adapter more inexpensive (currently it is at $450) and/or makes it compatible with the rising SAE standard. Even better put one on a chain at every non-Tesla DC charging station.

The big takeaway here is that we need to start thinking long term where everyone has 200 miles of range and DC charging capability. We need to build infrastructure for that reality. Those Level 2 chargers on roadways will be relics of the past. In fact, they already are.