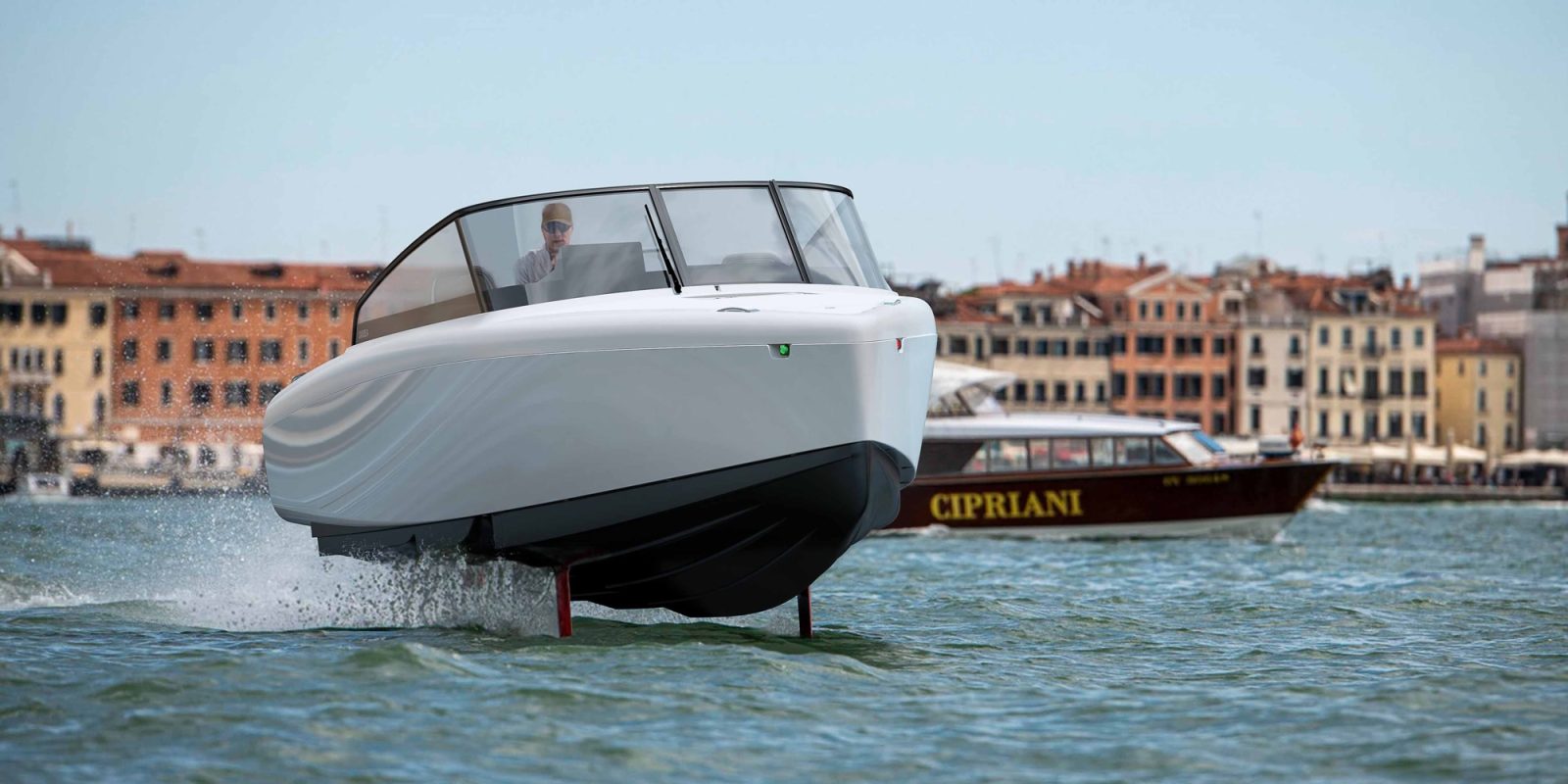 It’s not a strange sight to see silent flying boats zipping around the Stockholm Archipelago, where Swedish boatmaker Candela produces its C-7 hydrofoil electric speedboats. That popular model has already spread across Europe and the US as well, but is soon to have its position as the company’s flagship model usurped by Candela’s next-generation C-8. The new model will be formally launched a week from today at the Salone di Nautico Boat Show in Venice, Italy.

The Candela C-8’s groundbreaking design was officially unveiled last August ahead of its production, showing off the planned engineering and design of the flying electric speedboat.

Gliding above the waves, the C-8 flies on a pair of computer-controlled hydrofoils that automatically raise, lower and make fine tune adjustments over 100 times per second to create an ultra smooth ride.

Candela’s engineers, many of whom hail from the aircraft and drone industry, designed the boat to significantly reduce the energy required to cruise at speed while spending a day on the water.

A typical 28-foot boat of similar size to the C-8 uses around 15 times more energy than a family car. That should make sense, as shoving heavy water out of the way at high speed isn’t a job for the weary. That’s also one of the reasons that electric boats have often had either notoriously short ranges or exceedingly high prices from massive battery packs required to provide decent range.

But to avoid that problem altogether, Candela’s boats simply remove water from the equation, or at least fly directly above it. Once reaching a few knots of speed, the boats automatically “takeoff,”lifting themselves out of the water and significantly reducing the amount of energy required to cruise at a constant speed. The boat uses around 25% of the energy required by a typical speedboat, allowing it to achieve “longer range than any other fast battery-powered boat on the market – despite having a smaller battery pack.”

The design has proven so popular locally that the C-8 has outsold most other gas-powered speedboats in its size class.

The C-8 flies with a top speed of 30 knots, yet pulls only 20 kW of power when flying at 2/3 of its maximum speed. It can cruise along for 2.5 hours on just €8 of electricity, which Candela says is 90% lower than a similar-sized ICE powerboat.

But the benefits aren’t purely energy-based. The ride experience is also much nicer for everyone onboard, from the pilot to the passengers. Unlike V-hull boats that crash up and down on each wave, the C-8 remains smooth and steady even when crossing over waves and boat wakes.

Flying in absolute silence, without any slamming and basically for free – it’s just an amazing experience. Once you’ve tried Candela C-8, it will be hard to go back to traditional powerboats.

The ride is much quieter as a result, though part of the quiet ride also comes from Candela’s revolutionary C-Pod electric motors that move the entire drivetrain beneath the water line. A pair of counterrotating electric motors propel the boat from the bottom of the hydrofoil, taking advantage of the water immersion to run cooler and more efficiently. The design is also nearly maintenance free, requiring a maintenance interval of around once a decade for most recreational boaters. To put that into perspective, most gas-powered outboard engines require maintenance or inspections every 100 hours of operation.

While lucky boaters may have seen early C-8 test rides around Stockholm, the revolutionary new boat will get its first public debut at the Salone di Nautico show in Venice, on Friday, May 27.

The C-8 will also take part in the show’s grand finale E Regetta, which will be an endurance competition between electric boats.

It is with great pride that we’re debuting the C-8 at Salone di Nautico. The Floating city, which is dependent on motorboats but also suffers from their impact, is the perfect place to show off how Candela’s craft can contribute to a better world, while offering new levels of performance.

Venice is particularly vulnerable to the damage caused by boat wakes, with studies showing that 60% of all buildings along the canals have experienced structural damage to their wooden support pillars. But Candela’s hydrofoil boats are able to maintain speed while leaving virtually no wake. In fact, the small wake of approximately 5 cm (2 inches) created at top speed is equivalent to that of a classic Venetian gondola.

While I haven’t yet had the pleasure of seeing the Candela C-8 in person, I was fortunate enough to spend a day on the water testing a C-7 late last year.

The experience positively blew me away; you can see for yourself in my video below. And as the son of an oceanographer, that’s coming from someone who has seen a boat or two in his time.

I’m particularly excited about the prospect of testing the C-8 (which I can’t wait to do later this summer!) because it has a number of interesting upgrades over the C-7 that I previously tested. Not only is it a larger boat, but it is even better outfitted with features like a sun bed, lower cabin with sleeping for a family of four, marine shower and head, etc.

Even trying to ignore my selfish desires to experience all of the cool features, the prospect of seeing recreational boating shifting from ICE-powered to electric-powered boats should be enticing all on its own. Not only will that make a serious impact on the amount of pollution entering our waterways, but it will create a quieter and more peaceful waterfront for everyone. And with Candela’s upcoming electric ferry already contracted to transport riders in Stockholm soon, these electric boats will soon be making a difference for everyone from wealthy boaters to everyday commuters.