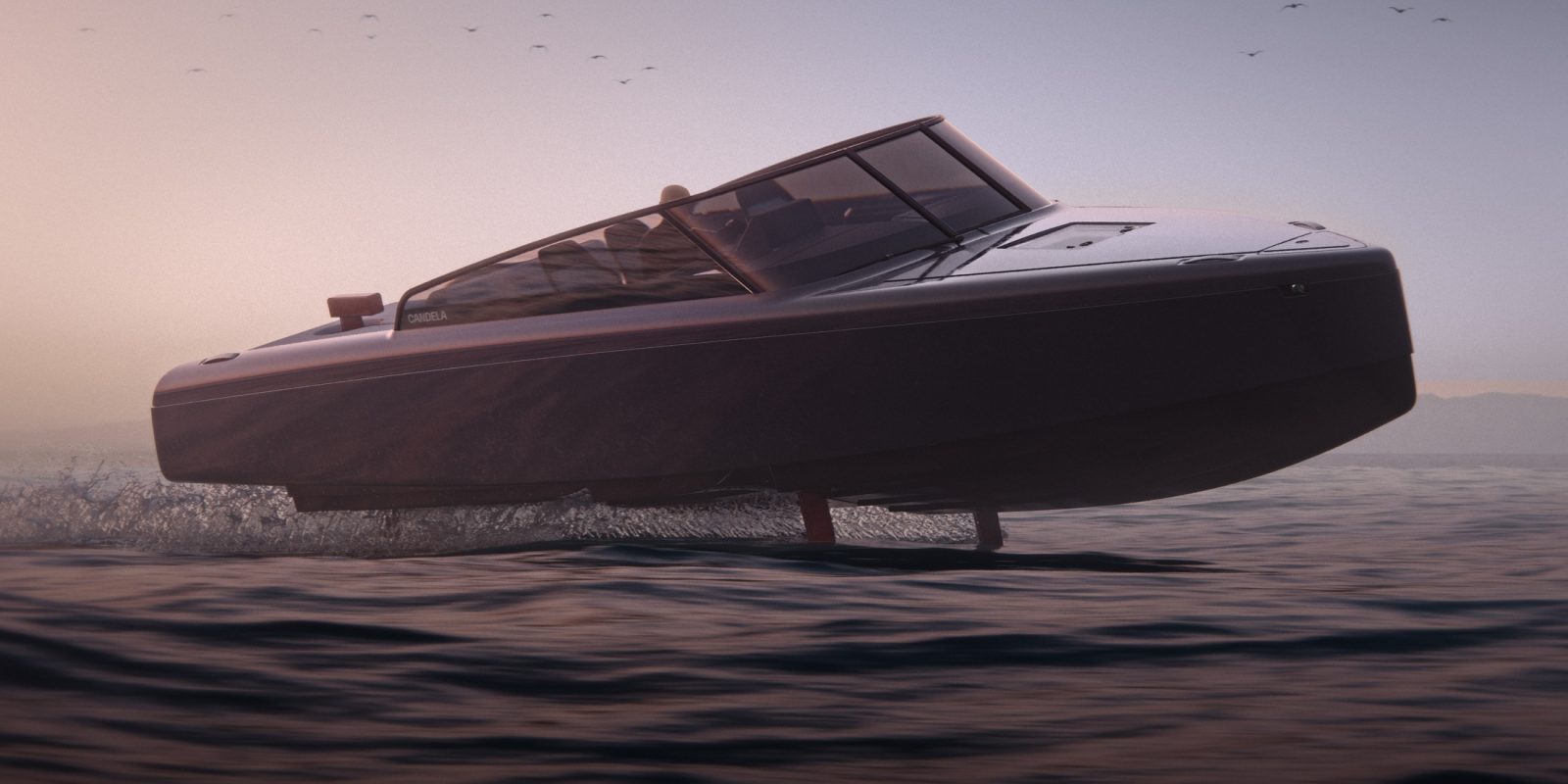 Candela has just revealed its latest hydrofoil electric boat, the Candela C-8. With the high-tech, ultra-premium electric boat designed for mass production, the company is calling this “an iPhone moment for the boat industry.”

Candela’s first flying electric boat, the C-7, debuted last year as a radical new option in the boating industry. It flew above the water on hydrofoils, allowing it to achieve far better efficiency and range than any other electric boat.

While it excelled at demonstrating the efficacy of Candela’s innovative technology, the boat was also largely hand-built from exotic materials in low-scale production for individual buyers.

The C-7 sold so well that it greatly outstripped supply, leading Candela to develop the C-8 intended for mass-production.

“With the C-7, we demonstrated that our hydrofoil technology not only allows for long range on electricity, but also provides a better experience than conventional boats. Thanks to our hydrofoil system, you get a smoother, nicer ride. However, the C-7 was more like a hand-built sports car; never intended for volume production.

With the new C-8, we’re pushing the technology to the next level, and at the same time focusing on making a boat that has all the comfort you would expect, while designing it for efficient mass production.”

Now the company is officially debuting the new larger and roomier Candela C-8 electric hydrofoil boat that includes a cockpit for eight passengers, a large sun bed, roomy cabin with beds for two adults and two children, and even a marine shower and toilet. Despite the suite of improvements, the larger and better outfitted C-8 still touts a price that is on par with the smaller C-7 as well as gas-powered premium boats in the 28- to 29-foot class.

That’s exactly the type of boat the company has its sights set on, hoping to edge out gas-powered premium vessels in the market.

As PR and communications manager Mikael Mahlberg explained to Electrek:

We aim to sell thousands of C-8, and we think it will be the first electric boat that has the potential to outsell combustion engine boats in the premium class. I suspect it will do so with a wide margin, we hope it’s an iPhone moment for boats – something that will radically change how we perceive how boats should be and look like. Not loud, costly to run, shaking and slamming and poisoning the very nature you came to enjoy – but completely silent, intuitive to use, fun to drive but still relaxing for passengers, respectful to nature, maintenance-free, very cheap to operate and upgradeable OTA.

Despite being larger than the previous C-7, the eight-passenger C-8 actually uses less energy thanks to its ultra-efficient C-POD electric drive unit developed in-house by Candela.

The C-8 will include Candela’s new next-generation hydrofoil system with an improved sensor suite and avionics.

The flying boat is jam-packed with embedded technology. Similar to Tesla’s self-driving cars, the C-8 features Autopilot that keeps the boat on a pre-set course, reducing the load on the captain and allowing for a more relaxing experience.

The hydrofoils are also tied into an automatic system developed by Candela, adjusting in real time to maintain a perfectly level flight despite shifting waves.

The team designed the boat’s carbon fiber hull to be much more efficient than typical planing boats. It helps reduce the energy required to get the C-8 up to a speed of 16 knots, at which point the boat extends its hydrofoils to lift up and become foilborne. The boat can then reach its electronically limited top speed of 30 knots (35 mph or 55 km/h).

Foiling allows the C-8 to literally fly over the tops of waves, making the ride smoother and more comfortable than typical shaking, bouncing speed boats. In particularly rough seas, the hull is designed to help pop the boat back up onto its foils after hitting a large wave. And if the sea is simply too rough for hydrofoiling, the C-8 can be operated like a normal boat, though with reduced range. When foiling is capable, the C-8 boasts a cruising range of over 50 nautical miles (58 miles or 93 km). The boat’s 44 kWh battery can be recharged fairly quickly in two hours with a three-phase charger.

Other premium features in the C-8 include a four-person sofa in the cabin, a freshwater shower, optional hard top for cold environments or for sun protection, premium sound system (which is apparently a unique experience in the cabin as the ride is virtually silent without motor noise or any waves on the hull), and a 15.4-inch high-resolution touchscreen for navigation and controls.

The C-8 also boasts huge maintenance and operating cost advantages over typical gas- or diesel-powered boats, and even over other electric boats. The sealed C-POD drivetrain is nearly maintenance-free thanks to a 3,000-hour maintenance cycle (compared to around 100 hours for gas boats). The C-8 is also 95% cheaper to operate than gas boats and more efficient than any other electric boat, resulting in lower electricity costs too.

Of course those electricity costs pale in comparison to the purchase price of €290,000 before VAT (approximately US $339,000). Candela says that’s on par or even below several gas-powered competitors in the 8-meter premium boat class.

While I probably won’t be the proud new owner of a C-8 any time soon, its technology can already help replace noisy, polluting gas-powered luxury boats in marinas around the world, and hopefully continue to work its way into ever more affordable designs.

Very few of us lined up to buy a Tesla Roadster a decade ago, but I see a pile of Model 3s everywhere I go today. That doesn’t mean we’ll see a Candela on every trailer in a decade, but the model of entering the premium market first is fairly tried and true in the EV industry.