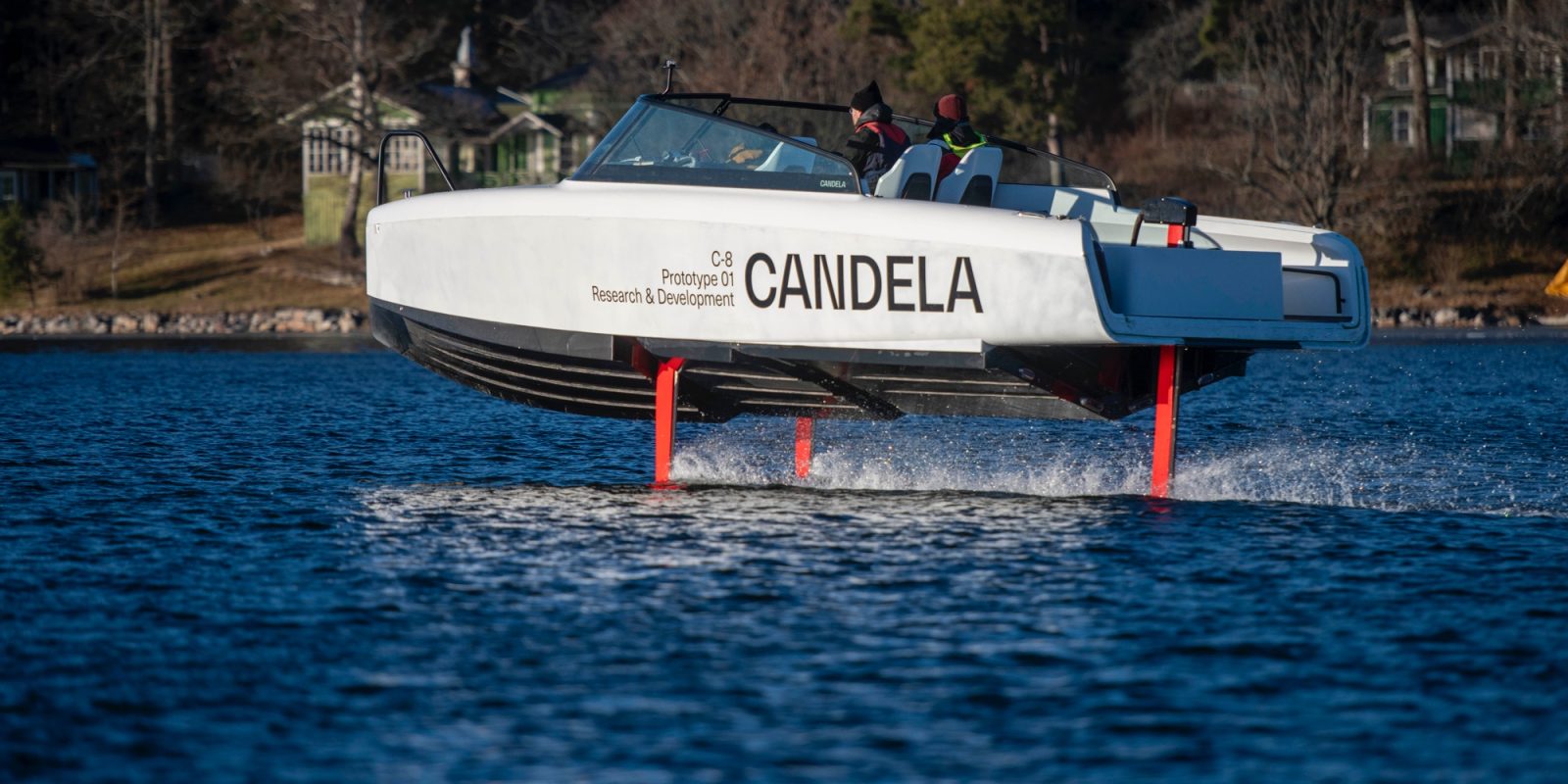 The Candela C-8 has had a whirlwind development schedule so far, speeding through its design process to today’s announcement of a maiden flight.

It was only publicly announced as an upcoming model last August.

A year ago it was nothing more than sketches on paper.

But no one expects a flying electric boat company to move slow.

And Candela has delivered with impressive progress, despite a worldwide pandemic and what I can only assume has not been prime boating weather in Sweden over the last few months.

But Candela can’t slow down, either. That’s because the C-8 has already become the best-selling electric speed boat in Europe (and it actually outsells most internal combustion engine-powered boats in its premium category).

That means the company has a pile of orders to fulfill.

With the C-8’s maiden voyage now completed, those deliveries are one step closer. Pre-order holders will still have to wait a few more months for full-sclae production to begin, but in the meantime they can at least watch the prototype doing what it does best: flying.

The boat is designed to take off from the surface of the water on its pair of hydrofoils after reaching a speed of 16 knots, which is exactly what happened during the maiden flight.

As you can see in the video below, the boat rises effortlessly out of the water thanks to its computer-controlled hydrofoils that make hundreds of micro-adjustments per second to keep the boat stable.

The hydrofoil flight doesn’t just make the ride smoother and quieter, it also reduces the energy requirement by around 80%. That means the boat can get by with a much smaller and less expensive battery, or go farther on the same-sized battery as a conventional electric boat.

Or to let Candela explain it with hard data:

“What makes hydrofoils so effective is the dramatic reduction in drag. A typical planing hull
has a 4-to-1 lift-to-drag ratio, while the Candela C-8 has a 20-to-1 lift advantage. Cruising at
20 knots, the C-8 can fly for 50 nautical miles on its 44 kWh battery – 2-3 times longer than
conventional electric speedboats with 300% bigger batteries.”

But the real comparison isn’t against other electric boats, it’s against boats powered by old-fashioned internal combustion engines.

The C-8 is designed to offer the same luxury experience that many traditional speedboat owners have come to expect (that includes a large sun bed, cabin that sleeps two adults and two kids, marine bathroom and shower, etc), yet in a package that is more fun to use and requires less maintenance.

And lower maintenance is a big deal, as any boat owner will know. The C-8’s C-POD motor provides 50 kW (67 hp) in a small unit and offers a nearly unlimited product lifetime due to the incredibly low maintenance of the sealed drive. Whereas many marine internal combustion engines require maintenance every 100 hours of operation or less, the C-POD can go for 4,000 hours without any maintenance. For a recreational boater that goes out for three to five hours every weekend, that’s nearly 20 years of use without any maintenance.

And to make things even easier, the C-8 also comes with an Autopilot feature. When the driver lets go of the wheel, the C-8 will continue to steer its pre-set course automatically. More advanced features will follow and can be added to the boats via over-the-air (OTA) updates.

I had the chance to test out Candela’s smaller C-7 electric boat last year, which uses similar technology but isn’t as advanced as the upcoming C-8. Even so, the ride experience was incredible.

Without fail, the most common question I get about it is people wanting to know how it handled waves and wakes left by other boats.

Most of the time, I was able to pass right through wakes from other boats with only a minor bump as the hydrofoils automatically adjusted.

When crossing the wake from a large 100+ foot ferry, the height difference was a bit too much, causing the boat to automatically slow and land. I just had to perform another take-off on the other side of the wake and I was good to go.

You can see my test driving experience on the Candela C-7 in the video below.

As admirably as the C-7 performed in the chop and passing through boat wakes, the C-8 is designed to handle even larger wakes and choppier water. That doesn’t mean you should expect to go hydrofoiling through angry 10-foot seas. But moderate chop should still be within its wheel house.

Candela is surely marking big news today with the maiden flight of the C-8, but the company has found itself in the headlines often recently, including news of a big funding round that should the company build a new, larger factory in Stockholm for the production of its C-8 electric boats.

And with the maiden flight out of the way, Candela’s CEO Gustav Hasselskog says it could be only a few short months away from the first C-8 deliveries:

“This successful first flight brings us one step closer to serial production. We’ll now perform a rigorous flight test campaign to ensure the reliability and maturity. We’re on track to deliver the first C-8 units this summer.”

Priced at around €290,000 (approximately US $329,000), the Candela C-8 certainly isn’t going to be an everyman’s boat. But the industry has no shortage of premium petrol-powered boats in its price range, meaning Candela stands to make a serious dent in fossil fuel-based boat sales. And just because you can’t afford a C-8 yourself doesn’t mean you can’t take a ride on one of Candela’s impressive flying electric boats. Not only are rental services incorporating the boats, but Candela is also set to deliver a series of commercial flying electric boats.

The company is already working on passenger ferries and water taxis that can be used by commercial fleet owners.

The upcoming Candela P-30 ferry, seen in a rendering below, is set to become the world’s first electric hydrofoil passenger vessel. It has already been commissioned by the Region of Stockholm, where it is set to commence traffic in 2023.