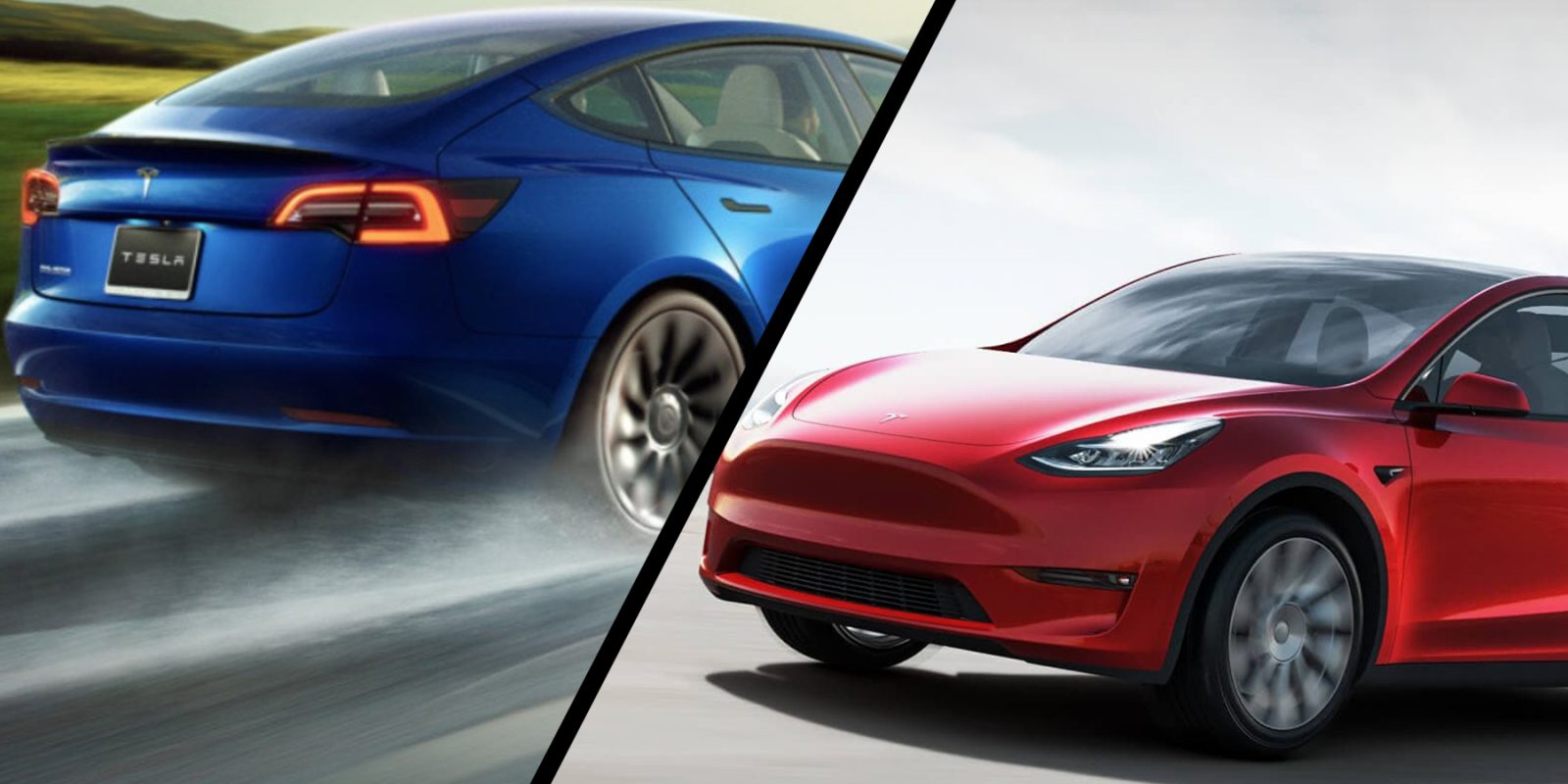 As the two youngest electric vehicles to join Tesla’s fleet, the Model 3 and Model Y have quickly helped propel the automaker to a market cap over $700 billion. While both EVs share several of the same parts, they do remain unique from one another in many ways. While not exhaustive, this side by side comparison of the Tesla Model 3 vs. Model Y should help you get a basic idea for how these cars differ…

From the early years after Tesla’s inception, CEO Elon Musk was candid about the automaker’s goal of someday providing quality EVs all consumers who could afford to drive. With 2016’s announcement of its Model 3 sedan, Tesla came one step closer toward its goal of an EV for $35,000.

After an encouraging number of early reservations were made for Tesla’s cheapest model to date, the Model 3 debuted in 2017. Since then, it has cruised comfortably in the fast lane of sales.

The EV currently sits as the world’s best selling all-electric vehicle and has accounted for a majority of the total Teslas sold since arriving.

Tesla (briefly) sold a $35,000 version of the Model 3 to hit a price point originally promised by Elon Musk in years leading up to the first delivery.

In November of 2020 however, Tesla quietly removed this option as part of the refresh for the 2021 Model 3. The latest version sits at a purchase price of $39,990 for the Standard Range Plus trim with zero added features.

More on pricing later, but first let’s get up to speed on the Model 3’s younger sibling, the Model Y.

The Model Y, the newest Tesla to debut

Tesla unveiled its Model Y in 2019 as a smaller, crossover version of its larger and more established Model X mid-size SUV. After beginning deliveries to customers in March of 2020, the Model Y remains the newborn in the Tesla family, making significant splash in sales alongside the Model 3

In joining the same third generation platform and the Model 3, Tesla’s Model Y shares many of the same components. For example, with the 2021 Model 3 refresh, Tesla adopted the “chrome delete” of its exterior trims to match the design of the original Model Y.

Furthermore, the Model Y was Tesla’s first EV to include its own designed heat pump, increasing both efficiency and range. The heat pump is now present on all of Tesla’s current EVs, Model 3 included.

While both of these share much of the same mechanical DNA, they deviate from one another in terms of their exterior look and their performance options.

Almost as quickly as it was implemented, the Standard Range Model Y suddenly disappeared from Tesla’s website configurator. Electrek later reported that the RWD Model Y will instead remain available as an “off menu” item, because Elon Musk was not satisfied with its 244 mile range.

Here’s a breakdown of how the Model 3 and Model Y stack up side by side.

Generally speaking, each of these two Tesla models appear different as a sedan versus a crossover EV, but both options offer plenty in terms of range, top speed, and acceleration.

The Tesla Model 3 leads the Model Y in variety of trims, highlighting various range and performance at different price points.

The cheapest Tesla available is the Model 3 Standard Range Plus, which can travel an EPA estimated 263 miles, reach a top speed of 140 mph, and can hit 0-60 mph in 5.3 seconds.

Tesla’s newest EV currently comes in two different dual-motor trims. While Tesla’s Standard Range RWD Model Y has since come and gone in the US, it appears to have reemerged in China.

The current Long Range Model Y boasts an EPA estimated range of 326 miles, can reach a top speed of 135 mph and can accelerate from 0-60 mph in 4.8 seconds.

Not bad in any category considering the EV also houses 76 cubic feet of cargo space compared to the 15 cubic feet of space on the Model 3.

If we consider the Standard RWD Model 3 as a standalone, cost-friendly option, the Model 3 Long Range and Performance trims best the Model Y all three categories above.

With that said, the Model Y stats remain more than adequate given its increased weight (nearly 350 lbs more for Long Range and Performance trims).

Both Tesla options will get you where you need to go quickly and efficiently (albeit one option will give you more room for cargo). That being said, it may be the additional features that help steer you behind the wheel of one Tesla over the other.

Differences between the Tesla Model 3 and Model Y

For starters, the front end of the Model Y resembles its assembly line counterpart at first glance, but the tweaks to its design on a taller and larger exterior help it step out of the Model 3’s shadow.Furthermore, the Model Y comes complete with a power liftgate full hatch trunk, a big wish for Model 3 owners.

Since the Model Y is a significantly larger EV compared to the Model 3, its second row seats independently fold down to store larger cargo. The Model Y is also available with a seven seat interior in addition to the standard five seats.

When it comes to driving, sedans tend to be more speedy and fun, but SUVs offer a better line of sight and a feeling of more safety sitting higher off the ground.

The Model Y does offer more of a feeling of sitting higher up, although it realistically only sits one inch higher off the road than the Model 3.

Having such a low center of gravity enabled by the battery pack works to the Model Y’s advantage as well. This helps Tesla’s youngest EV feel noticeably stable and connected to the road.

Performance, customizable options, and available features are of course important in any EV purchase. With that said, for many people the final deciding factor in a Tesla is price.

Note that these prices are accurate as of the publish date, and we’ll keep them updated for you moving forward. Furthermore, these prices do not include the additional $1,200 for destination and documentation fees, taxes, or federal rebates.

As they say, “age before towing capacity,” so let’s start with the Model 3.

The Standard Range Plus trim begins at a starting purchase price of $39,990 with zero add-ons and standard white exterior paint. This trim can go as high as $54,490 if you were to add every top feature available including red exterior paint, 19″ Sport Wheels, black and white interior, and full-self driving capabilities.

The Long Range Model 3 starts at $49,990 and can reach a top end price of $64,490 fully loaded. This includes all the same add-ons as previously mentioned

Last but certainly not least, the Performance trim of the Model 3 starts at $56,990 and can go even higher to $69,990 with all available add-ons.

Overall, your least costly option for a new Model 3 is about $40,000 while the most expensive version comes in just under $70,000.

The two dual-motor options for the Model Y start relatively higher than the Model 3 prices and rise from there.

The Long Range trim starts at a base price of $53,990 and rises to $72,990 with every available upgrade. This includes an extra $1,000 for the aforementioned tow hitch, 20″ Induction Wheels, custom exterior and interior, plus the seven seat option for an additional $3k. Lest not forget this also includes FSD capabilities.

If you’re wondering how the Model 3 and Model Y stack up against the other Tesla, check out our Tesla pricing guide.

What Tesla is better, the Model 3 or the Model Y?

In conclusion, there’s plenty of evidence as to why these two Teslas have made up a huge majority of the American automaker’s total sales in recent years.

Both offer performance, intuitive design, and value no matter your budget. Similar yet different in their own unique way, either Tesla has the available options to give you plenty to enjoy in an electric vehicle.