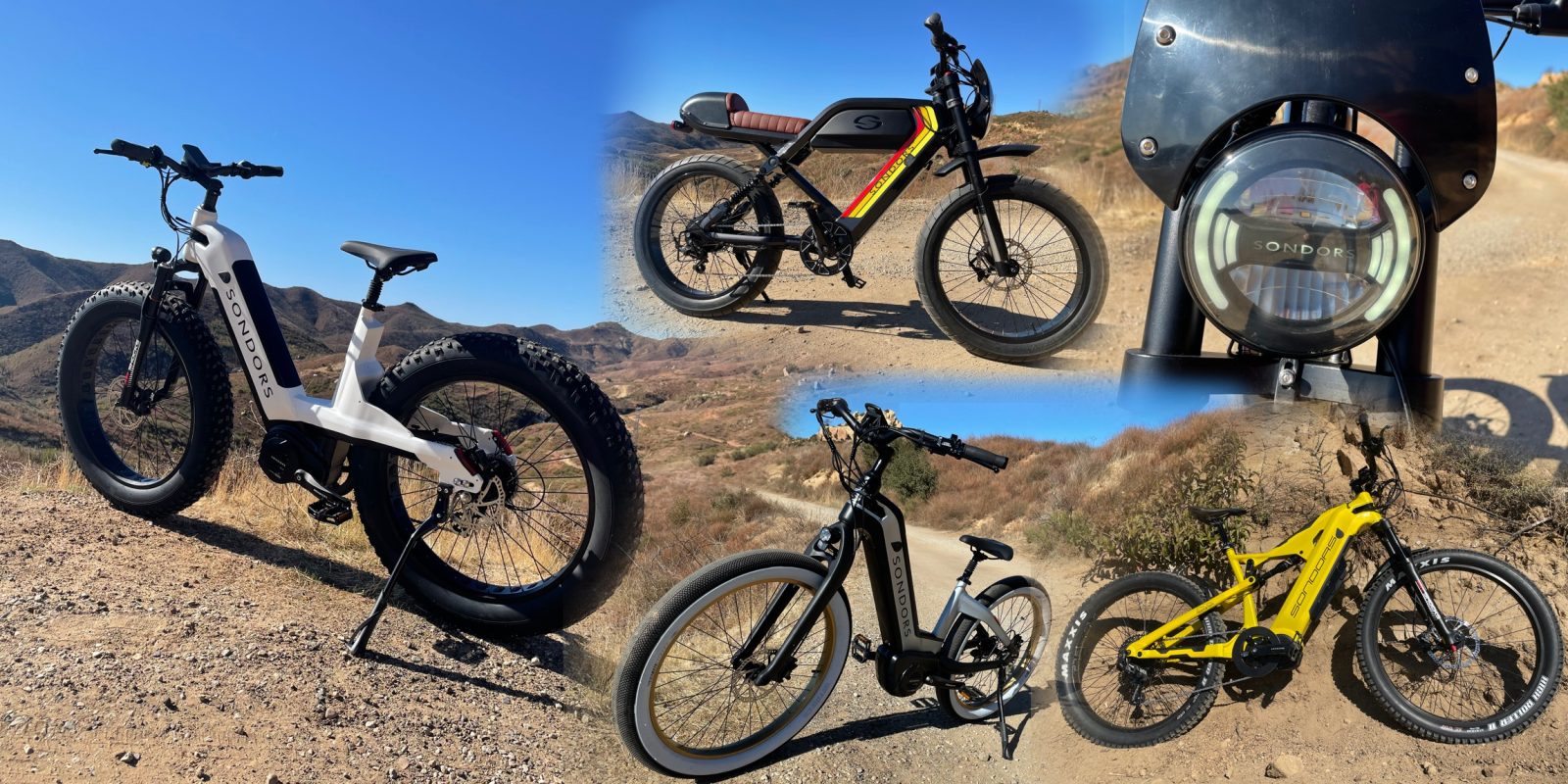 Electric bicycle company SONDORS has been busy over the last six months, unveiling a handful of new e-bikes and rushing them into production. We got the chance to test out the company’s latest four models including the SONDORS Rockstar, Cruiser, LX, and the upcoming SONDORS MadMods electric moped. Electrek can also get you $50 off one of the new e-bikes (or any e-bike from SONDORS, for that matter) by getting a personalized coupon code.

On a sunny Los Angeles morning earlier this week, Electrek team member David O’Connell (aka DOC) met up with SONDORS product director Matt Irish to check out the new e-bikes.

Four shiny new electric bikes were laid out before a mix of trails and tarmac.

The bikes were originally unveiled throughout the summer and fall of 2019, a chaotic period in the e-bike industry when the COVID-19 pandemic was causing huge delays in production.

While the SONDORS LX and Cruiser step-through models have just started shipping, the Rockstar electric mountain bike and MadMods electric moped won’t ship until later this winter and spring, respectively.

So while some of these models are just now starting to show up on reservation holders’ doorsteps, all four bikes were new to us as we took our first look at the latest models.

The first three models all fit into the more traditional electric bicycle categories, although none are by any means “traditional.”

They all feature the Bafang Ultra mid-drive motor that is notorious for its massive power potential. However, SONDORS has decided not to push the motors to their full potential, instead operating them with a 25A limit that results in a nominal rating of 750W and a peak wattage figure in the low 1,000s.

The SONDORS LX and Cruiser are both step-through models that feature a more laid-back, cruiser-style geometry. The SONDORS Cruiser is, as you may have guessed, the truer-to-form for a classic cruiser bike. It sports wide handlebars and balloon-style white-wall tires. The hybrid-style tread actually performed decently well off-road, though the lack of suspension in either the fork or frame means that you’re relying entirely on the balloon tires and a suspension seat post to smooth out the ride.

The SONDORS LX on the other hand adds an air suspension fork and even wider tires that further improve the ride. Those fat tires on the LX feature true knobbies and thus were even better equipped for the morning’s trail riding.

Neither bike felt overpowered, likely thanks to SONDORS’s even-handedness with the power limiting of that beefy Bafang Ultra motor.

The SONDORS Rockstar was by far the most fun e-bike of the bunch though, featuring the best suspension and giving an overall higher-quality feel.

That tracks, as the Rockstar is the flagship model of the Elite line, priced at a premium of $2,499 compared to the $1,999 Cruiser and LX.

The improved suspension, aggressively knobby Maxxis tires and nimble ride of the bike definitely felt like a big upgrade for SONDORS, which is better known for e-bikes in the value-focused categories.

That value legacy is hard to shake though, and even the flagship Rockstar still didn’t seem to have the build quality of some of the nicer high-end electric mountain bikes we’ve tested.

But at half the price of many high-end electric mountain bikes, the Rockstar feels like a nice balance for someone who wants to brush up against the finer things in electric mountain biking but isn’t ready to fork over the several thousands of dollars usually required for that level of quality.

If the SONDORS Rockstar was a hit, then the MadMods prototype was something of a miss, at least in comparison.

The MadMods electric moped is definitely one of those e-bikes that looks better than it rides in this early stage. Which isn’t that surprising, since it looks incredible. The nicely stitched cafe racer-style seat, the dual coilover rear shocks and even the custom SONDORS headlight all look pretty epic.

Unfortunately the prototype bike we rode just isn’t cut out for that type of riding as its budget-minded price catches up with it. SONDORS offered to make some adjustments for our ride but we decided to take it in its default form.

At $1,499, this was SONDORS shot across the bow of more expensive electric moped companies. But cutting prices also means cutting costs, and the prototype suspension appears to be one of the first casualties of the price war. We’re told SONDORS is actively working on big improvements here.

But the prototype bike just didn’t feel nearly as comfortable as it looked, and that rear suspension was far from plush.

To be fair, the seat wasn’t doing it any favors. Again, SONDORS is hard at work making it easier to sit and pedal with a smoother suspension here. We’re going to take a look at a production ready version in the coming weeks and expect the seating and pedalling to be much better.

The SONDORS MadMods are available in three flavors. This is the cafe racer version, and no one has ever chosen a cafe racer for its comfort.

But the other two models in the lineup feature a different seat style that is taller and more padded, plus higher handlebars, meaning they are likely going to be more comfortable than this variant.

The bike will never be described as “overpowered” either. The 750W motor is fine, but doesn’t seem to match the level of power that the awesome design of the bike implies. That seems to a common problem as moped-style e-bikes have seen their designs improve quicker than their motors can keep up with.

None of this means the bike is a write-off though. It just fills a certain niche in the industry.

The Super73 Z1 is another electric moped I’ve tested that can’t list comfort or power in its “main features” column, but still has redeeming qualities largely centered around its fun and sexy design.

So while the MadMods electric moped line may not give the best ride (yet!), it has style for days and a killer price. Those two points may be all the redemption it needs for many riders.

All this and more, coming soon

SONDORS has been pumping out new e-bike models at an impressive rate over the past six months or so. But they aren’t just working on electric bicycles. A recent teaser shows they have something bigger planned.

We don’t know what it is for sure, but all the clues point to a light electric motorcycle.

The debut is slated for this Thursday, January 14. We’ll be sure to update with the latest developments from the unveiling.

Until then, let’s hear your thoughts in the comments section below on the SONDORS Elite line and the new SONDORS MadMods electric moped.