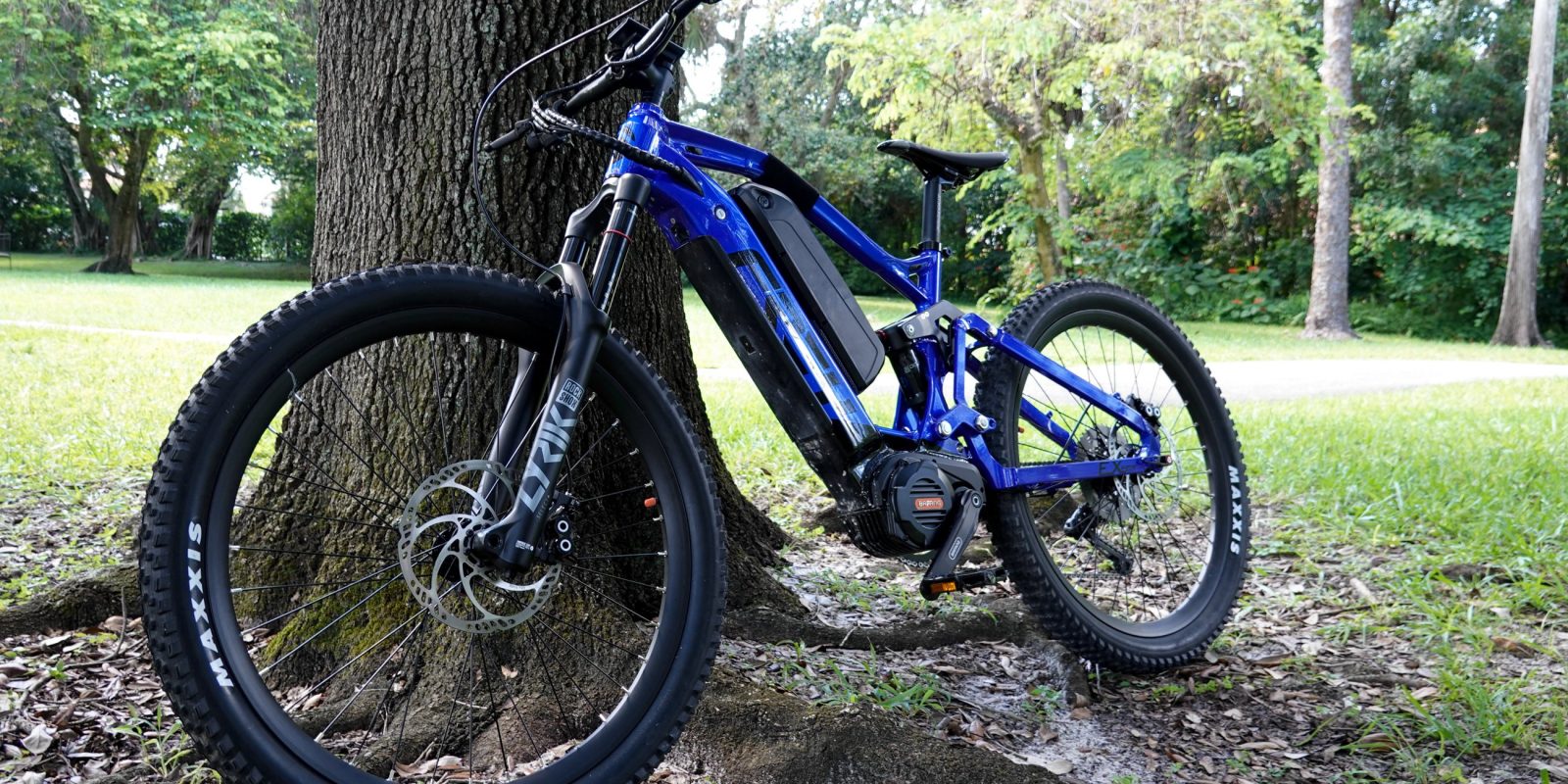 There are two things that FREY doesn’t mess around with: quality and power. The Jinhua, China-based electric bicycle manufacturer lays into both, heavily. And nowhere is that more evident than in the FREY EX Pro electric mountain bike.

To see this crazy electric bike in action, check out my video review below!

I almost don’t know where to begin with this bike.

The suspension is phenomenal. On the street, you can hit curbs and feel like you’re riding around on your own private cloud. On the dirt you can take on logs and rock stairs with damping that feels like you’re using a cheat code.

And then there’s the power. Oh, goodness… the power! The muscle found in the FREY EX Pro is incredible. Having 1.5 kW of power and 160 Nm of torque at your fingertips will send chills down your spine. The bike is so powerful that I actually rarely open it up all the way.

For most technical riding and trails, I actually keep it in Eco mode instead of Sport mode and use mostly pedal assist, which works great with the built-in torque sensor in the Bafang Ultra motor. But when I want to go fast, especially when I’m on the street, I’ll put it in Sport mode and lay into that throttle. Doing so can rocket me up to around 36 or 37 mph (nearly 60 km/h) in a jiffy.

Obviously that’s faster than normal e-bikes, and you have to be aware of what your local regulations are. And I don’t ride that fast often. But there are 40 mph (64 km/h) roads between me and my local trails, and so having the ability to ride fast on the road and take the lane instead of pedaling a big, slow mountain bike on the shoulder is a big safety factor for me.

Then there’s the dual battery system on the FREY EX Pro, which is really a thing of beauty. Riding around fast and laying into that 1.5 kW motor would drain a typical e-bike battery quickly. But the FREY EX Pro has room for two batteries — one in the down tube and the other riding piggyback on top of the first.

That allows me to use a bunch of power on the way to my favorite riding locations, get a whole afternoon of riding in, and still have juice left for the ride home.

While the FREY EX Pro works great on the street (and feels like a light electric motorcycle), the bike is most at home in the dirt.

Mind you, I’m not the one doing 10-foot jumps. Admittedly most of my e-bike riding is on the pavement and not the dirt. But the FREY EX has helped me improve my off-road and mountain biking skills tremendously.

A major part of that has been the confidence provided by the build quality and top-shelf components. Those Magura MT5e four-piston hydraulic disc brakes are the crème de la crème of e-bike brakes right now. And that suspension fork costs as much as one of my favorite e-bikes on its own, not to mention the FREY EX Pro’s high-end rear shock and proprietary rear suspension linkage designed in-house by FREY.

During off-road riding, I’m usually in one of the medium pedal assist modes, and I use throttle sparingly.

The powerful motor allows me to overcome obstacles with ease, yet isn’t overpowering when I still want to get in a good workout. In fact, wearing a heart rate monitor showed me that I could get a surprisingly thorough workout on the FREY EX, even in spite of its high power motor.

Ultimately, it’s all about how you use the bike. And moderation is key.

A word on responsibility

I want to get real with you guys here for a moment. Listen, the FREY EX Pro has a lot of power. Like, almost too much power. That’s great when you’re climbing 45-degree mountain slopes, but it’s also a great way to get yourself or someone else hurt.

When you have this much power, you absolutely MUST use it responsibly. That means not flying around blind turns on shared trails or coming up quickly on other cyclists that aren’t anticipating your speed.

Ultimately, this can mostly be summed up with “Be a good person” and you’ll probably be fine.

E-bike responsibility at these levels also means riding carefully on the street, whether regarding obeying local e-bike regulations or just not being a jerk with cars. Just because you have the power and speed to cut someone off doesn’t mean you should.

The FREY EX Pro has light motorcycle-level performance and you need to be aware of that. In fact, if you’ll be using the bike for street riding, especially at high speed, getting some motorbike education like the two-day MSF motorcycle course would be a great idea.

As much as I’ve enjoyed riding the FREY EX Pro, it’s not perfect. There are basically two main complaints I have about the bike.

The first is that there is no cover for the second battery holder, which is external. If you want to ride with one battery in the bike and the upper battery removed, you could end up getting mud or dirt on the battery holder and its electrical contacts.

From what I’ve heard, FREY is working on a custom cover for the battery mount, but I don’t know if there’s an option available yet to purchase. In the meantime, I’ve just always ridden with two batteries installed.

The second issue is that the Bafang Ultra motor is almost too powerful, or at least too powerful for today’s e-bike components. It has a habit of breaking chains prematurely, especially when not used correctly. A word to the wise: Don’t ride around in the smallest (i.e., fastest) gear all the time, and don’t try to apply power while shifting. Those are the two best ways to put undue stress on the transmission. I reserve the smallest cogs for the few times I want to hit high speed on the road. And when I shift while under power, I try to blip the brake lever just enough to engage the electrical cutout. Otherwise, I just let off power for a second while shifting so the chain is not loaded while jumping cogs.

I know the last one isn’t really FREY’s fault, it’s more that the bike component industry isn’t quite ready for such high power motors. But it still applies, since it is a weakness that you could experience. It’s not a bad idea to put a spare chain in your saddle bag, FYI.

This is absolutely not a beginner e-bike and it’s not for the faint of heart, either.

And you do have to order through a long email process or Alibaba, which can be new or strange to some people, but the company is the real deal and so you don’t have to worry about their integrity. Like I said, I’ve been there in person and met the entire team.

If you have the cash and want a higher power, faster, more rugged, and higher spec’d e-bike, the FREY EX Pro is a great way to get there.