Interbike, the largest bicycle trade show in the US, kicked off its industry and media-only portion today with the Outdoor Demo – a chance for companies to show off the abilities of their e-bikes.

While we saw some nice road-ready electric bicycles, it was the wide array of electric mountain bikes that stole the show. Read on to see the impressive lineup of diverse e-bikes we test rode today.

The Interbike Outdoor Demo took place at the Northstar California Resort, home to an impressive, sprawling ski resort in the winter and some pretty intense downhill mountain biking trails in the summer. So obviously its pretty hilly – the perfect place to torture test some e-bikes!

Even though downhill electric mountain bikes were the darlings of the day, we started off a bit easier by testing some of Raleigh’s street and hybrid bikes, the 2019 Raleigh Tamland IE and the 2019 Raleigh Lore IE.

The Tamland IE is a drop bar road bike, while the Lore IE feels more like a crossover between a mountain bike and a road bike.

We were basically starting on top of a mountain, as most ski resorts are, and so the only way forwards was down. We started bombing a mountain road and were up over 35 mph (56 km/h) in seconds. The Tamland IE felt like I was riding an ice skate down the highway, it just took a line and zoomed as if I was gliding on ice. Its Brose mid-drive was whisper quiet. Literally, I couldn’t even hear it. Sometimes it is hard to tell it is even there, except when you hit its Class 3 28mph assist limit and realize that your own legs can’t hardly get the bike to go any faster on a straightaway.

The Lore IE was a bit louder with its vinyl geared Bosch Performance Drive that lacks the same smooth internal belt reduction as the Brose, but both bikes powered right back up the hill almost as effortlessly as they had gone down. 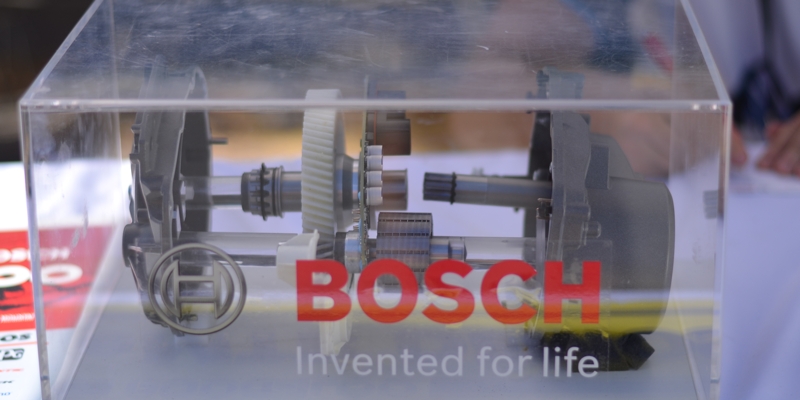 500 Wh batteries are standard on both models, but while the Lore IE’s was a more visible Bosch PowerPack 500, the Tamland IE’s battery was integrated directly into the downtube of the frame, disappearing from view. Very sleek. 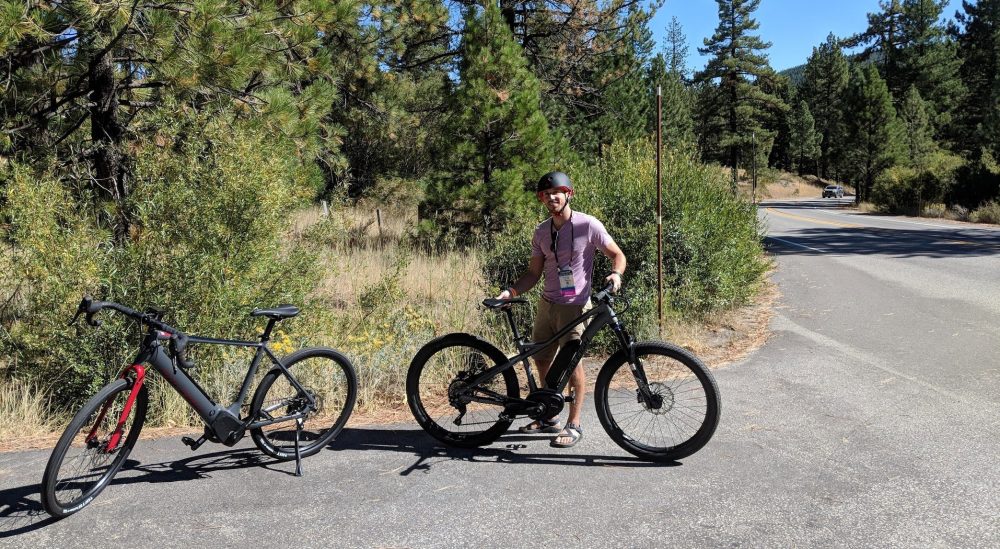 Between the two, I’d likely choose the Tamland IE ($3,799) if I was doing purely road riding, and the Lore IE ($3,499 right now, dropping to $2,999 on November 1st) if I wanted something that would be a little more forgiving on hopping curbs or hitting potholes. Raleigh put a wider 27.5 x 2.8″ tire on the Lore IE, which when combined with the RockShox front suspension and mountain bike style frame make it the perfect all-around bike.

As Rob Kaplan, Vice President of Sales for Accell North America (Raleigh’s parent company) described it to me:

“The Lore IE is a mountain bike style that we’ve tweaked into an urban assault vehicle.”

The Outdoor Demo was mostly full of off-road electric bicycles, and the Northstar California Resort’s downhill trails were an excellent location to put the e-bikes through their paces.

We started off with a pair of e-bikes from BULLS, which are known for their rugged and powerful rides. I took the BULLS SIX50 EVO AM4 while our publisher Seth rode the BULLS Monster EFS fat-tire bike.

While everyone was waiting in line to ride the ski lift up to the top of the mountain with their bikes, we decided to take a shortcut – and ride straight up the mountain. With these two e-bikes it was a snap. They simply climbed and climbed like it was their job.

Both are pedal assist bikes, so we didn’t have handle throttles to “cheat”. But in the highest assist level, only minimal pedaling effort was required to zip right up the steep mountain slope. 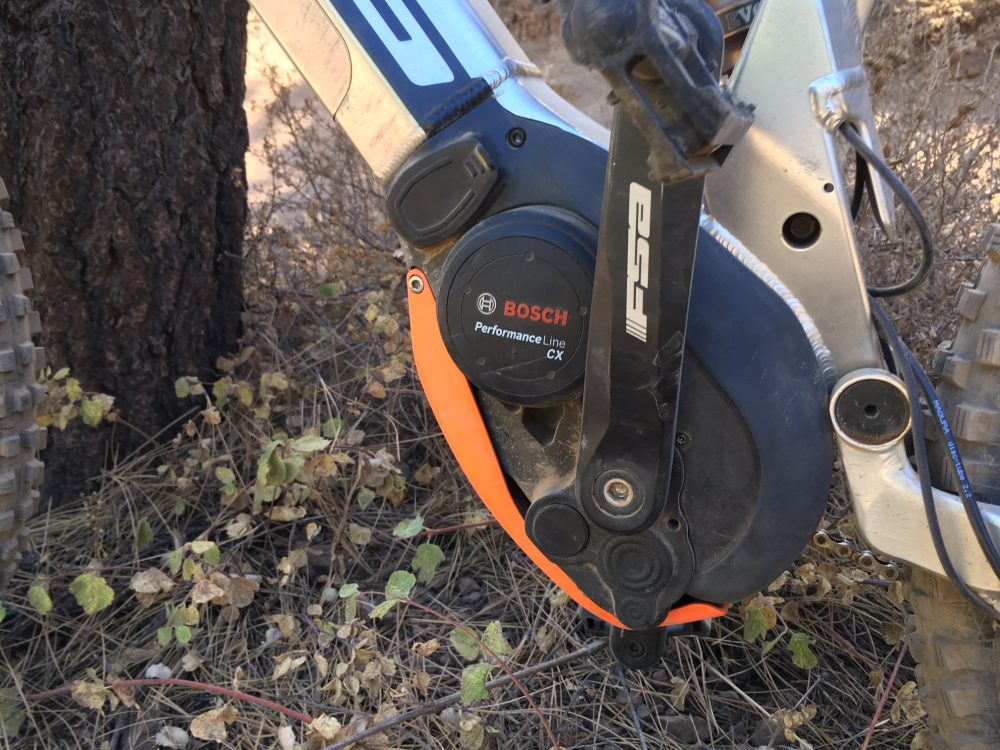 However, my bike had started with only one bar of battery, and the battery died a couple hundred feet from the trailhead. That meant that I had to pedal the last bit, which gave me a true appreciation for just how much of a difference the electric motor made. Where before I had been nearly effortlessly gliding up the mountain, now I was struggling to stay vertical on the steep slope.

But I finally made it, and we were ready for our first downhill test on the bikes. 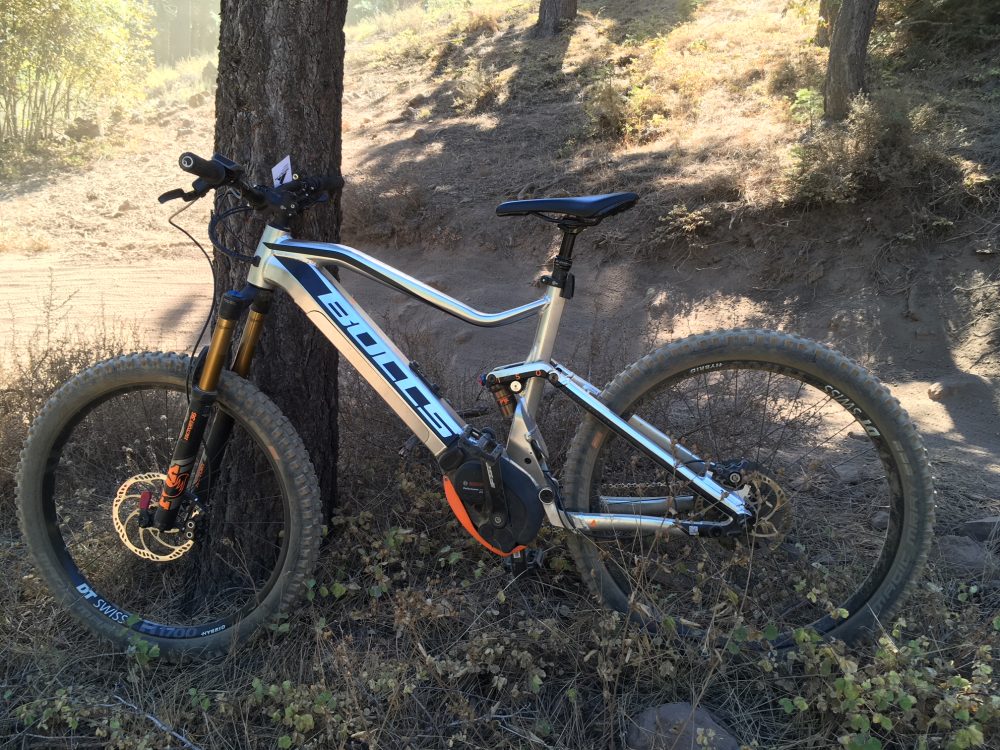 Neither Seth nor I are highly experienced downhill mountain bike riders, so I have to admit that we did opt for a trail called “Easy Rider”. Though despite its reassuring name, we were soon confronted with high banked turns, random boulder surprises, wooden bridge features and dirt jumps where both tires left the ground for what felt like a disconcerting amount of time.

But for all of our sliding, bumping and jumping, the bikes never even blinked. Not only did I feel super safe on them due to the responsive handling, but the ride was amazingly comfortable. The SIX50 EVO AM4 has 150 mm (6 inches) of travel in its Fox suspension, both front and rear, which meant that slamming into big rocks at high speed was an oddly comfortable affair.

The giant tires on Seth’s MONSTER EFS bike combined with its full suspension were even more forgiving on the harsh trails. 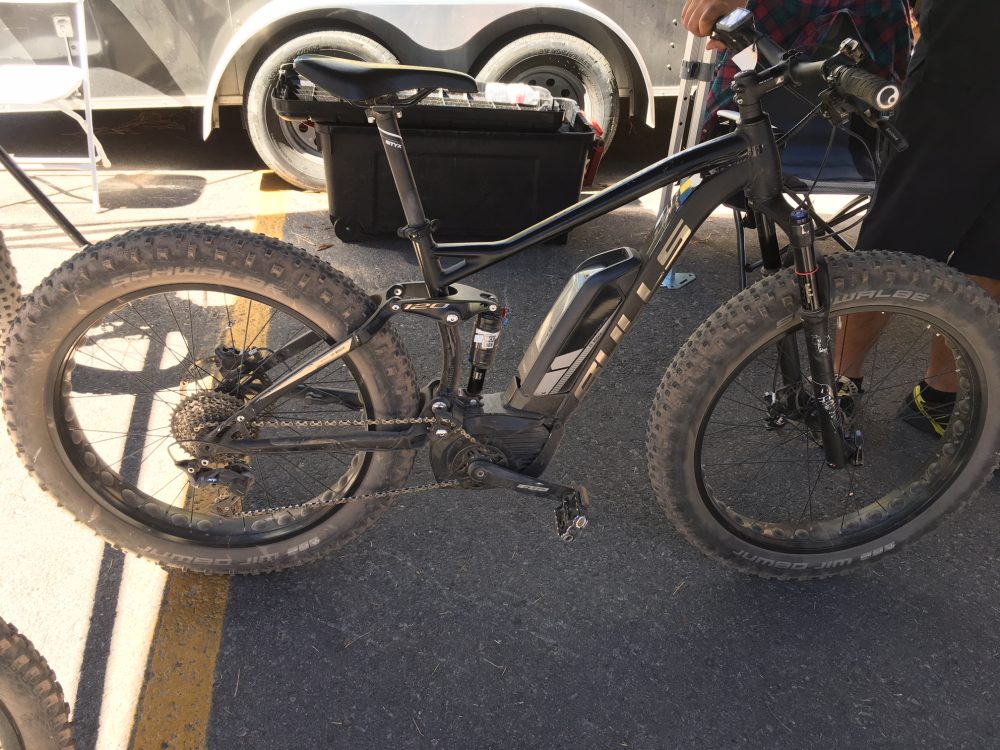 Both bikes were simply top notch quality and the intense riding proved what a difference that quality can make. Of course, such craftsmanship doesn’t come cheap. The AM4 is a $7,399 e-bike, and the MONSTER EFS isn’t cheap either at $5,499. 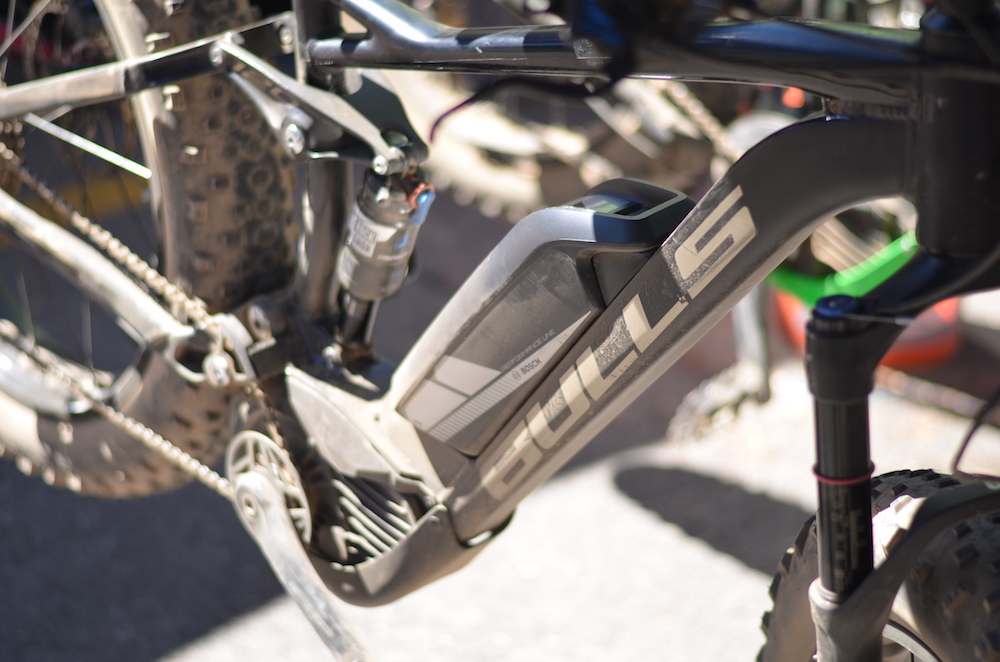 But if riding these rough trails taught me anything, its that spending that kind of money gets you a bike that can safely and comfortably handle extreme terrain like this, especially compared to some other bikes we tried late in the day. More on that in a moment.

Soon it was time for lunch which was served at the lodge part way back up the mountain. Sure, we could have hopped on the chair lift to ride up with all the pedal bikers, but that’s not what we came here to do! Time to test out the climbing ability of some new electric bikes. This time we took out a pair of the Rambo R1000XP G3 Carbon electric fat tire bikes. 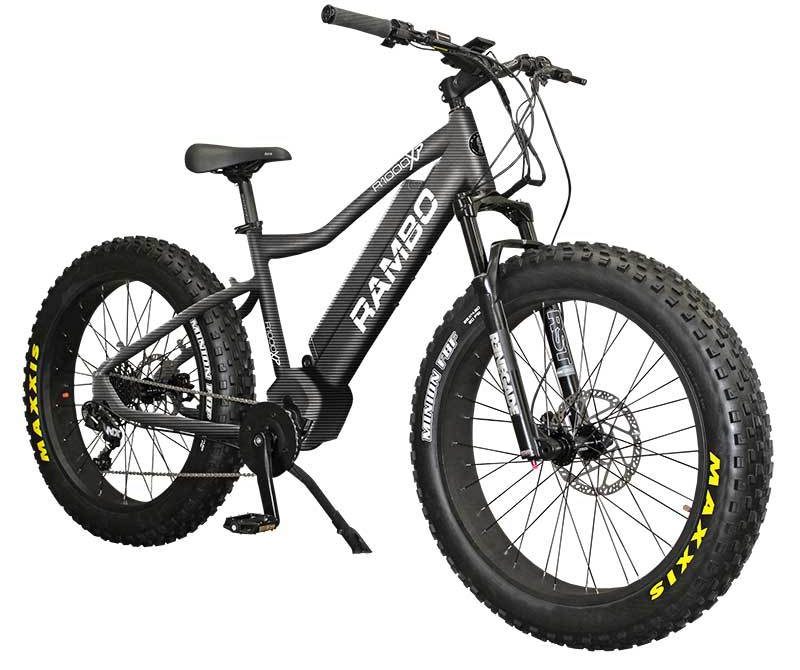 Most of the other e-bikes we had been testing so far were in the 250-500W range. These bikes are at least double that, sporting 1,000W Bafang BBSHD mid-drives hidden in their carbon fiber frames. 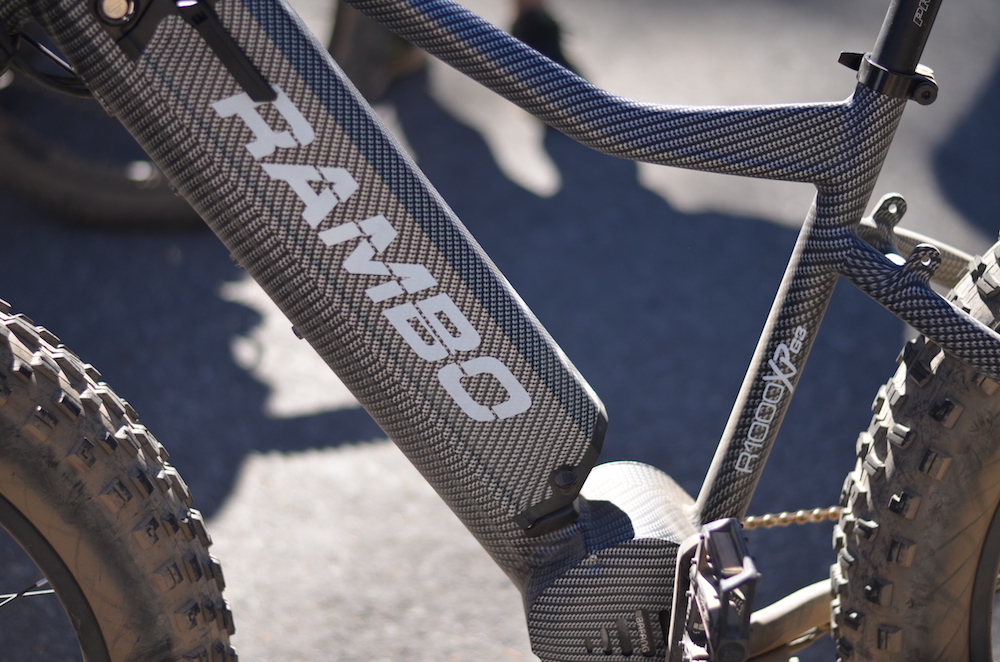 The torque on these things was fairly insane, and proper gear selection is key. My bike started out in the lowest gear, while Seth’s was in one of the highest. When I tapped the throttle, I was instantly popping wheelies. The power and torque was impressive. But starting in a higher gear, Seth’s acceleration was slower as the motor was more bogged down. However, the solution to overcoming resistance is often as simple as “more power”, and the Rambo’s 1000W motor quickly brought the bike up to speed. Seth was pulling away from me – uphill – as I was still figuring out my gears.

Once we got the gearing all settled though, it was smooth sailing for both of us. I was dropping the gears lower on the steep sections to enjoy the crazy torque as we climbed back up the mountain, then as soon as the slope got less steep, I bumped up the gears again and was flying surprisingly fast up the still moderate slope.

The Rambo’s giant 4″ fat tires were almost as good as rear suspension, helping to absorb the rocks and bumps on the dirt road we used to climb the mountain towards the trail head.

Once we hit the trail head and started flying back down the mountain on some fairly intense twists and turns, the lack of rear suspension was noticeable, but not a deal breaker. I wasn’t gliding down the mountain quite as smoothly as I did on the BULLS AM4, but the ride was still fairly smooth considering the legitimately intense terrain. I would have been worried about twisting an ankle hiking down these trails, much less zooming down them on an e-bike at 30 mph (48 km/h).

These bikes aren’t cheap either, at $4,699. Though Rambo also has some lower power models that are quite a bit more affordable, and even a kid’s size electric fat bike too, which we should see more of in the next couple days at the Interbike Expo.

The Haibike XDURO NDURO 10.5 was simply an absolute machine – a work of art even. And considering the price tag of $6,999, it better be. The suspension on it was so soft, Seth described it as “like riding a giant marshmallow”.

At first, he wasn’t sure how he felt about it. With 180 mm of travel on the front shock and 70 mm on the rear, you could tell the bike was absorbing every movement, which can be an odd feeling when you are anticipating the bike to move more rigidly beneath you. But as soon as we were back to bombing rocky trails, he was quickly won over by the ultra comfortable suspension that forgave riding transgressions large and small.

This was our last ride of the day down the slopes and we wanted to grab a couple different bikes for comparison. Though in the end, it turned out this might not have been much of a fair comparison, consider Seth’s Haibike was a top-of-the-line performance machine, while mine was very much an affordable and entry-level electric mountain bike.

The Haibike handled everything we threw at it with as much ease as the best bikes we had ridden all day. 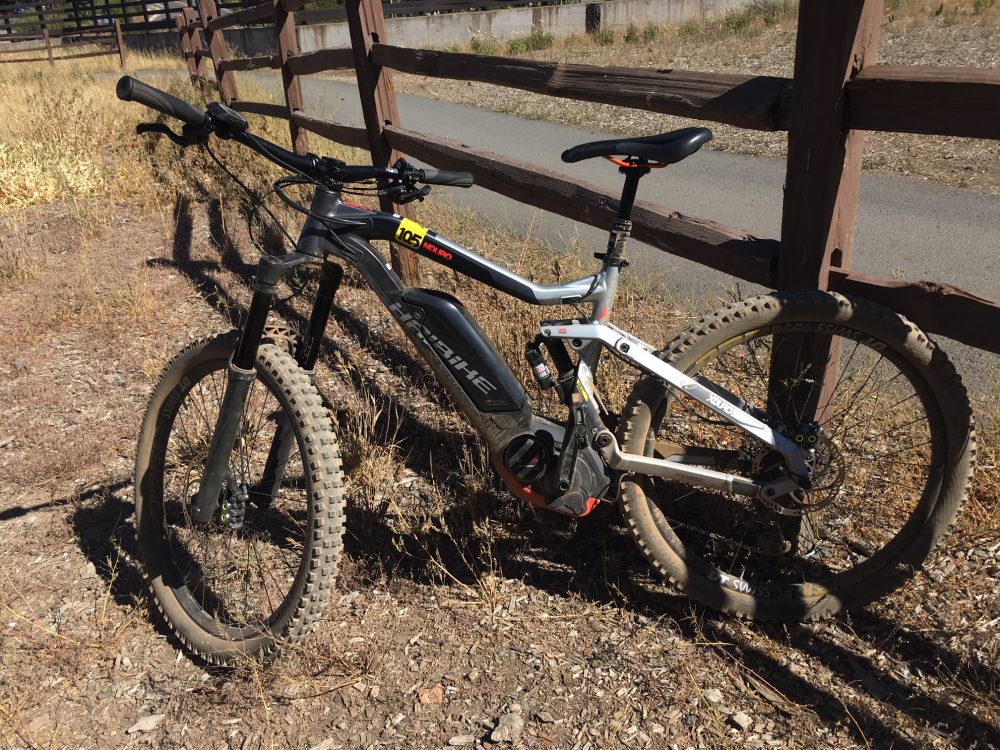 The Magnum Peak, on the other hand, well let’s just say it’s maybe not cut out for the same extreme trail riding. It’s an electric mountain bike, for sure. But with no rear suspension and only a Suntour spring fork up front, it was less than forgiving on the rough terrain.

After 10 minutes of harsh trail riding, my hands were barking pretty good. 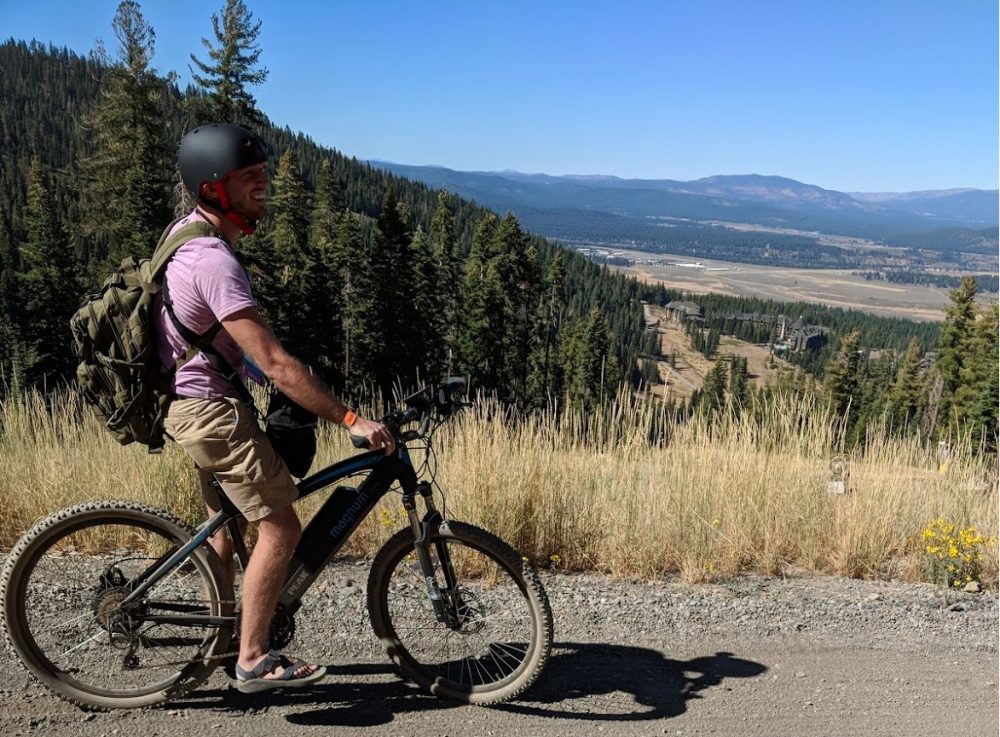 Once we hit the bottom of the trail though and popped out in the parking lot, it rode beautifully. In my opinion, the Magnum Peak is one of those mountain bikes that makes a wonderful commuter, but not a great actual “mountain” bike. Its suspension is fine for absorbing curb hops and pot holes, but not for bouncing off boulders and sliding down gravel slopes.

But at less than $2k, it’s not really in the same class as these $6k+ e-bikes either. It’s a good affordable e-mountain bike, while the Haibike is a great high-end e-mountain bike.

The Outdoor Demo was a great chance to try out some of the coolest electric mountain bikes, but there’s a lot more at Interbike than just e-mountain bikes.

Over the next few days we’ll be seeing many more e-bikes from all walks of life, including road bikes, cargo bikes, folders and more. We’ll be sure to share the latest news on product releases and announcements from all the major electric bicycle brands.