There are hundreds, perhaps thousands of different e-bike models available at this point. With everything from inexpensive little 250 W e-bikes all the way up to pricy multi-kW bikes. And one of the most interesting and impressive additions to the high-power end of the spectrum has been the Bafang Ultra mid-drive electric motor.

At first glance, the Bafang Ultra mid-drive electric motor looks much like its competitors.

Don’t be fooled by the 1,000 W nominal badge on this motor. Under the hood, the Bafang Ultra is capable of pulling 1,600 W from the battery using only its stock settings. But the motor is so overbuilt that it is commonly modified to pull well over 2,000 W. 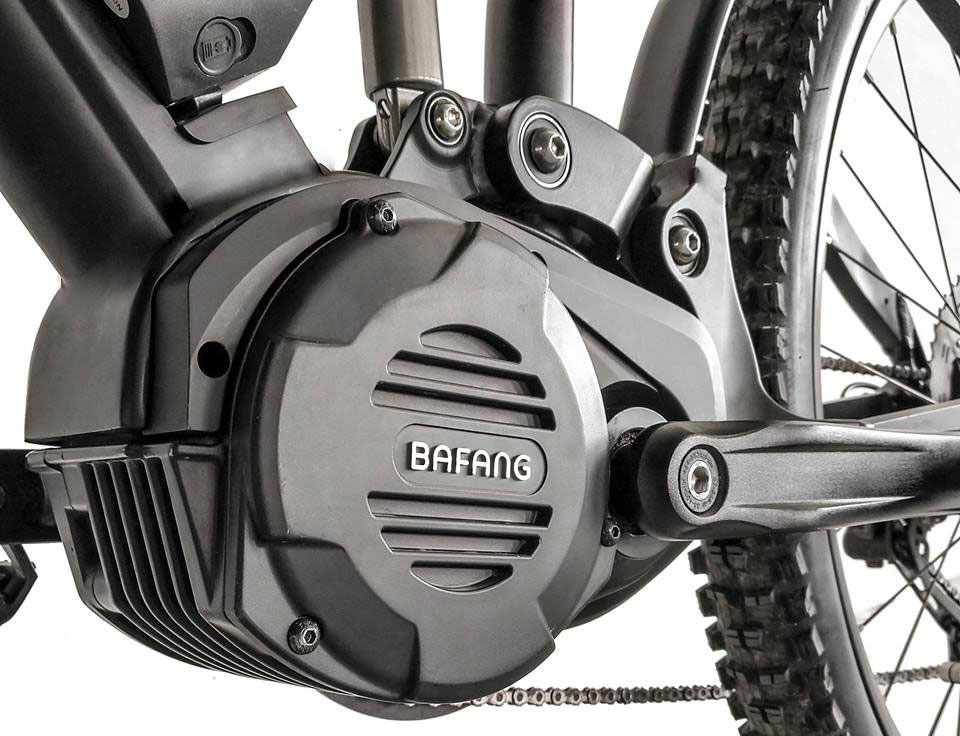 And if 2 kW doesn’t sound like a lot, then remember that we’re talking about a bicycle here. I’m not a professional cyclist, but even in decent shape I can barely crack 500 W of pedal for more than a few seconds. This motor can put out the power of four of me hammering on a single bike at full sprint – and for hours on end!

The torque rating on the Bafang Ultra is also through the roof. At 160 Nm, this motor is far and above any other mid-drive on the market. The best and latest models from other industry leaders are only now reaching 90 Nm, meaning the Bafang Ultra packs well over twice the torque of most of its competitors. That translates into wheelie popping, seat-of-the-pants thrill riding that most people have never experienced before on a bicycle.

The Bafang Ultra is capable of providing power up to 28 mph (45 km/h) under stock conditions. At those levels it would potentially be classified as a Class 3 e-bike in the US or a speed pedelec in Europe. However, that may also rule it out for legal on-road use in many locales that limit e-bikes to lower speed and power levels. With that much power though, many users will be taking this motor to the dirt trails instead of the pavement jungle.

How the Bafang Ultra motor did it

The engineering that went into the Bafang Ultra mid-drive electric motor is admirable.

To increase the torque, designers started with a much larger diameter motor than is conventionally stuffed into a bicycle. Below, the Bafang Ultra (right) is compared to an already powerful 1.5 kW Bafang BBSHD (left). The Bafang Ultra positively dwarfs it. That larger diameter means the motor can pull harder against its magnets, providing extra high power and torque. 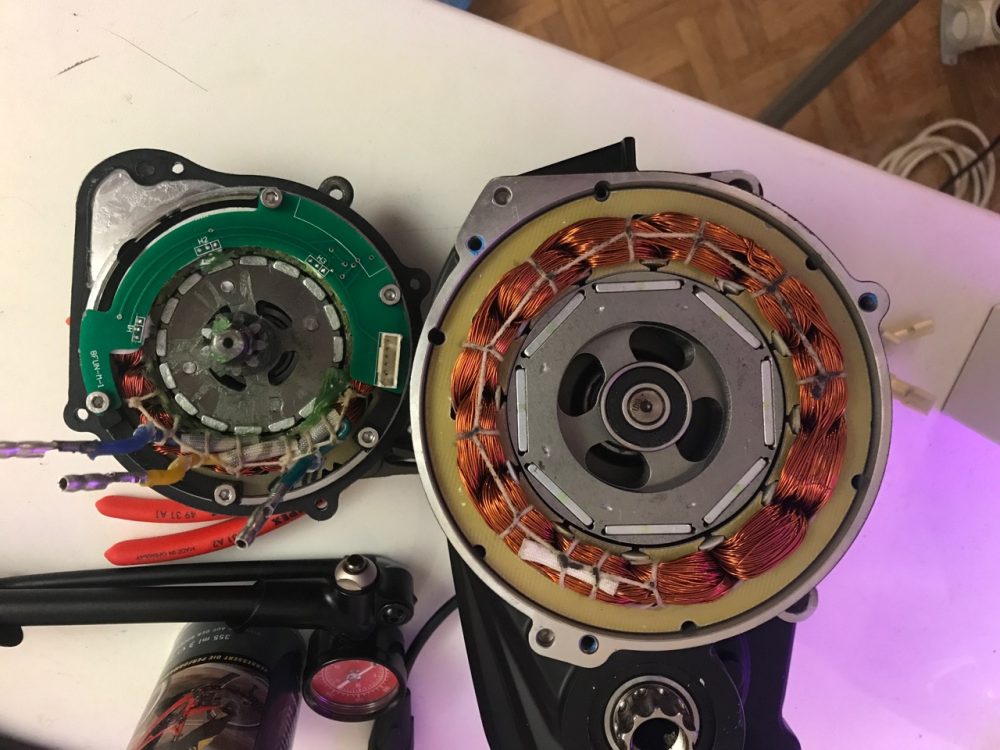 That larger diameter also increases efficiency, as the relative speed of the magnets passing by the motor coils is faster.

The magnets on the Bafang Ultra are also mounted slightly further from the copper coils which keeps them cooler, also increasing efficiency.

According to the technical site ElectricBike.com:

“The permanent magnets will ‘magnetize’ the slim section of steel between them and the electromagnets in the stator. This keeps the magnetic field strength in the air-gap at an acceptable level, while still placing the actual permanent magnets a short distance away from the air-gap. Permanent magnets can lose their magnetic power if they get too hot, so by doing this, you can use more ‘temporary peak’ amps without overheating the magnets.”

The Bafang Ultra’s internal controller is also optimized for extremely high power. Most mid-drive motors use 6 MOSFETs, the small internal circuits that control power flow to the motor. But the Bafang Ultra doubles the standard with 12 MOSFETs. That opens the door to higher power and less energy lost as heat waste. 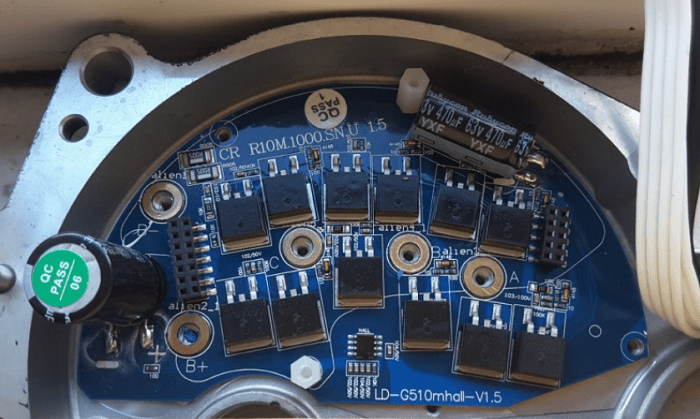 Next, the Bafang Ultra uses triple gear reduction inside the motor, unlike the double reduction found in most competitors.

The gears are helical cut, which helps reduce noise. Of course it won’t be nearly as whisper quiet as Brose’s famous belt reduction mid-drives, but it certainly won’t be as loud as the old school straight cut gears still found in some mid-drives. 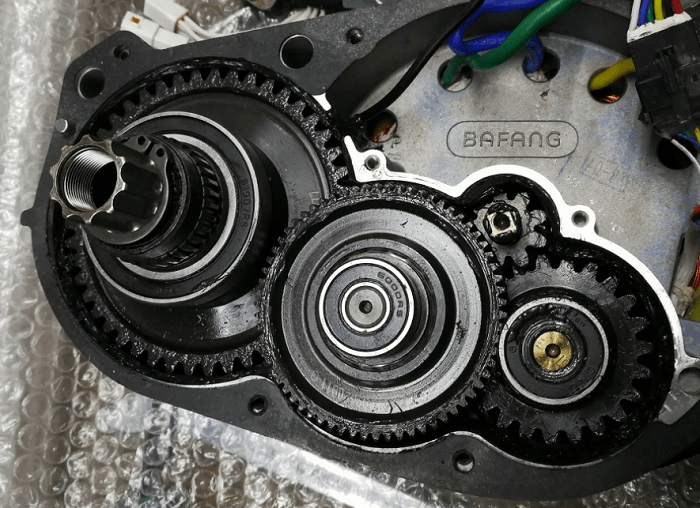 Finding a Bafang Ultra in the wild

The Bafang Ultra drive can already be found on a few of electric bicycles, but 2019 is likely to see many more companies adopting this drive.

The motor isn’t cheap though. For example, the Biktrix Ultra, an e-bike that Electrek will be reviewing soon, costs $2,999. Though considering this motor packs more power than some electric sit-down scooters and light electric motorcycles, the price suddenly doesn’t seem so high. 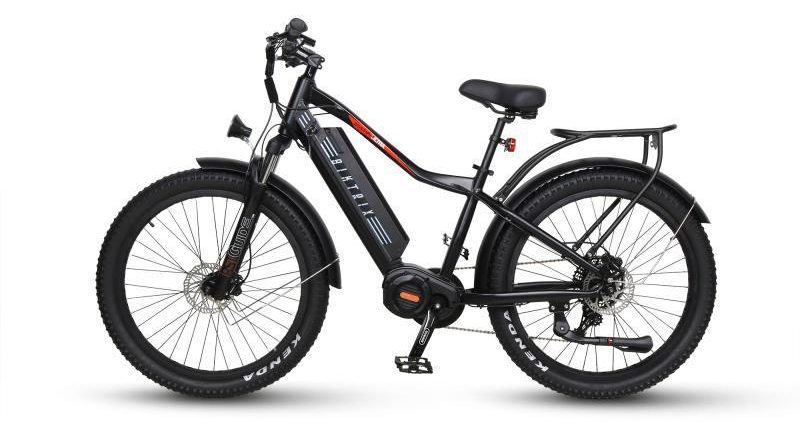 Unlike Bafang’s previous mid-drives that could be installed by DIYers on custom e-bike conversions, the Bafang Ultra also requires a proprietary mounting plate just like most other mid-drive motors. However, Bafang actually offers an aluminum housing that handy garage fabricators can weld into a frame to build their own e-bike beasts.

So with an increasing supply of OEM e-bikes sporting the Bafang Ultra and the possibility to DIY it, the future of this drive is looking quite bright. But we want to know what you think! Let us know your thoughts on the Bafang Ultra in the comments below.