GM reveals 10 new production EVs all at once, with range up to 400 miles 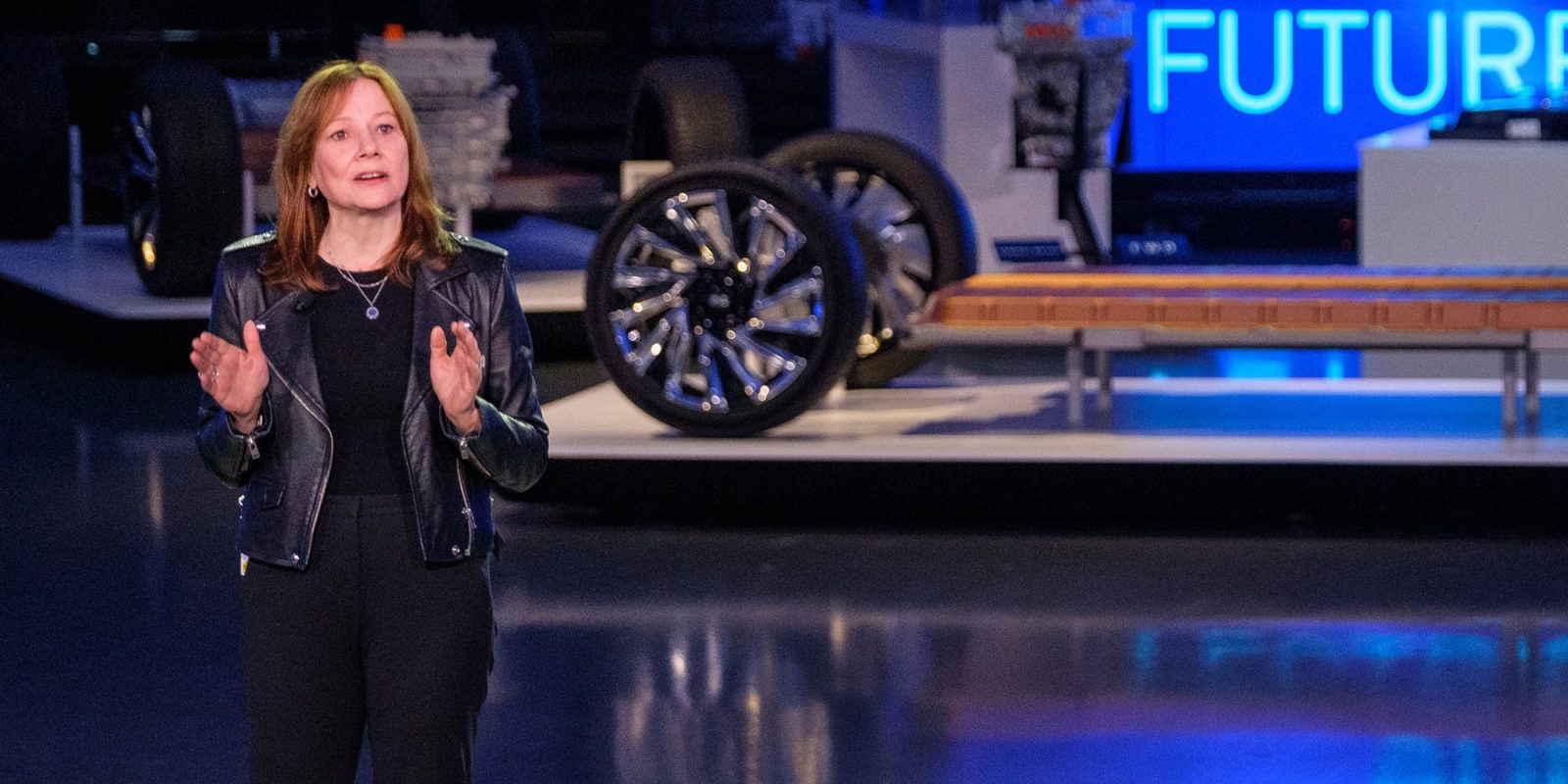 General Motors held an EV-unveiling event today that was unprecedented in the volume and range of zero-emission vehicles intended for production. Instead of showing a single new model, or one aspect of electric-propulsion technology, the company fanned out its entire upcoming portfolio using all four of GM’s existing brands: Chevrolet, Cadillac, GMC, and Buick.

The event revealed images of two additional EVs, an all-electric Chevy Truck and a Cadillac SUV. The autonomous GM/Cruise Origin was also on display. All told, 13 electric vehicles were presented.

Unfortunately, the company prevented cameras from the event. And it only released a teaser silhouette image of the Cadillac Lyriq. Images of the EVs will be released as the vehicles are fully unveiled.

The presentation took place in front of employees, media, investors, and others gathered at its Warren, Michigan technical center. Reuss said that 20,000 employees work at Warren – with 60% of them working on EV tasks (up from 20% just a few years ago). The theme from executives was that GM would bring its full industrial might to EV production.

“This is a historic moment for GM,” said Mary Barra. “I believe in my heart that we are going to be leaders in electrification. We’re going to keep working at it no matter what others say. They will either believe, or we’ll show them, and then they’ll believe.”

The display of those 10 models (plus the Cruise Origin in the entryway) illustrated GM’s “multi-brand, multi-segment” strategy from “Bolt to Hummer.”

One new EV after the next through 2025

What stood out during GM’s “EV Day” was the head-spinning schedule of EVs to be released in the next couple of years.

The rollout of EV models begins with a new version of the 259-mile Bolt EV launching in late 2020. That version of the Bolt is a mid-cycle update using the company’s existing EV and battery architecture. GM expects global Bolt sales to double in 2020 to about 50,000 units. Sales in the US will reach approximately 30,000 units, a year-over-year increase of about 80%. The new version now offers adaptive cruise control.

At that point, the company will move on to its third-generation EV architecture and new battery system. The Cruise Origin, a self-driving electric shared vehicle, shown in January 2020 in San Francisco, was the first product revealed using GM’s new third-generation EV platform and Ultium batteries.

Mid-2021 will have two back-to-back EV launches, starting with by the 2022 Bolt EUV, launching summer 2021. The 2022 Chevrolet Bolt EUV will be revealed in summer 2020, with production beginning in 2021 at GM’s Orion Township assembly plant. Its wheelbase is five inches longer than the current Bolt.

The Cadillac Lyriq luxury SUV launches in China in 2021 and in North America in 2022.

That will be followed by the GMC Hummer EV. The electric Hummer will be revealed on May 20, with production expected to begin in fall 2021 at the Detroit-Hamtramck Assembly Plant. The Hummer EVs on display were sporting 35-inch wheels, which will come standard. They also featured removable rooftops that can be stored in the frunk.

A focus on a new battery system

The centerpiece of the presentation was the company’s new battery system, dubbed “Ultium,” which will power GM EVs starting next year.

The battery system is focused on modularity, allowing different types of cells and chemistries to be used in packs ranging in size from 50 to 200 kWh, enabling “up to 400 miles of range or more.” The company committed to producing cells, in cooperation with LG Chem, that reduce the use of cobalt by 70%, thereby bringing down costs. 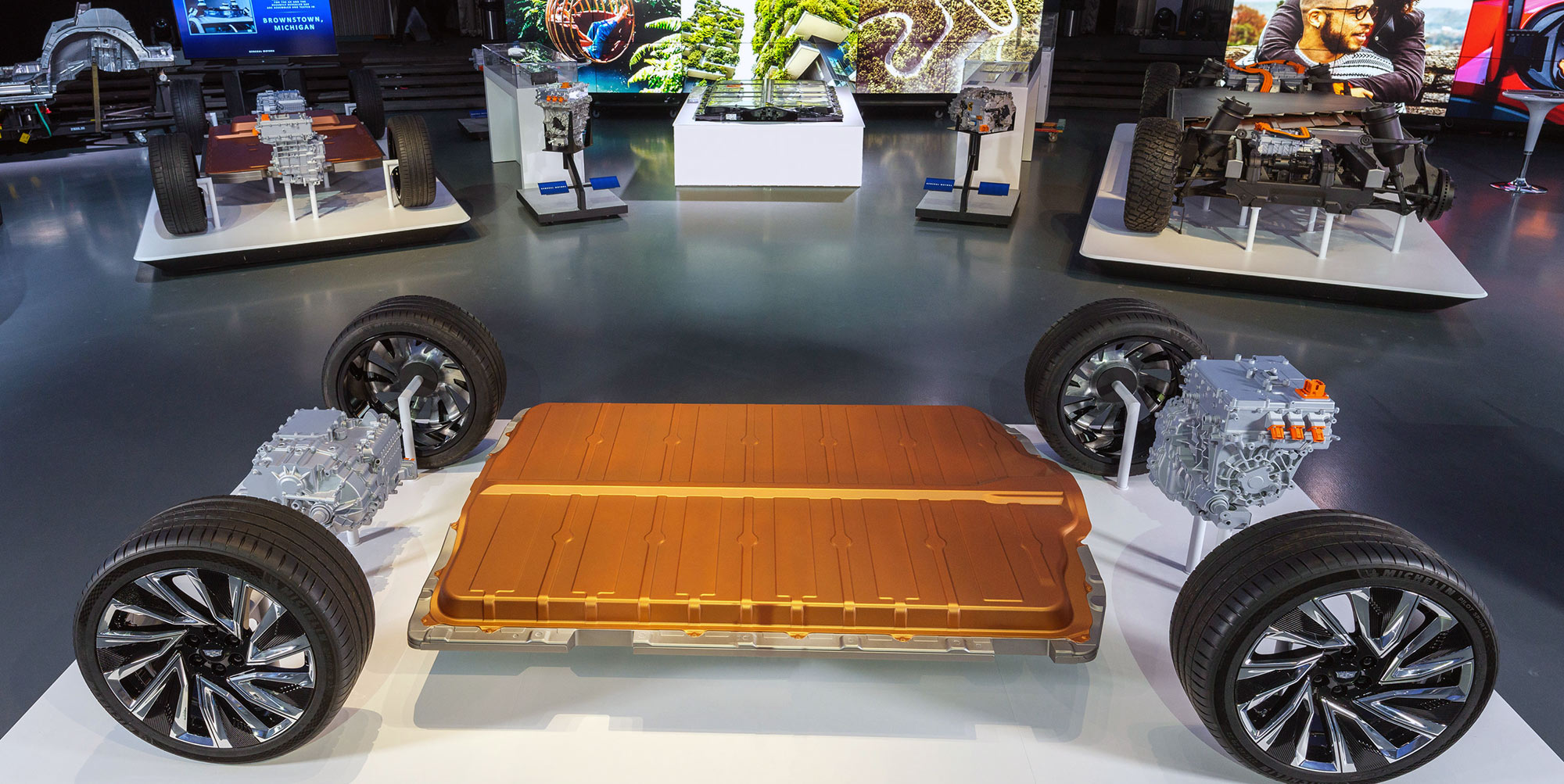 Each module will have a dedicated battery-management-system, a move that will allow an individual module to be replaced with a new one, and even to mix and match different chemistries within a pack. The BMS for a module will store a full set of data that can be accessed at the end of its life, facilitating the recycling and re-use of the cells.

Andy Oury, a lead engineer for batteries, said, “Ultium is going to help us break through the $100 per kilowatt-hour cost curve.” That refers to the cell price. The cost at the pack level is most likely around $120/kWh, coming close to the critical price point at which battery-powered vehicles reach price parity with combustion cars.

GM also emphasized that its modular cell-module-pack system that allows for stacking within vehicles vertically or horizontally. Packs can use modules in quantities of 6, 8, 10, and 12. In the case of the GMC Hummer EV, two sets of 12 can be stacked upon one another to utilize 24 modules reaching 200 kilowatt-hours.

Company engineers similarly introduced a “family of in-house-developed” electric motors for configurations of one, two, or three motors. The front-wheel motor version is rated at 180 kilowatts (241 hp), and the rear produces 250 kilowatts (335 hp). When the Hummer uses one motor in front and two in the back, it yields the 1,000-hp GMC Hummer EV featured in the recent Super Bowl commercial.

GM reiterated that GM’s upcoming EVs will be profitable from “very, very early in the Ultium platform,” according to Barra. The company expects to exceed more than 1 million global EV sales per year “by mid-decade.”

The volume of news coming out of GM’s event today was a lot to consider. After all, there were 10 new EVs revealed at once, along with a new EV architecture.

On the one hand, it makes the usual EV unveilings that we cover seem mild. In terms of quantity, it was impressive. But it will take the next few days to sort out the details and break down what it means. An unveiling for a Cadillac EV in April and the Hummer EV in May will provide more details.

However, even at this early stage, it’s clear that GM held today’s event to let the world know that it’s serious about an electric future.