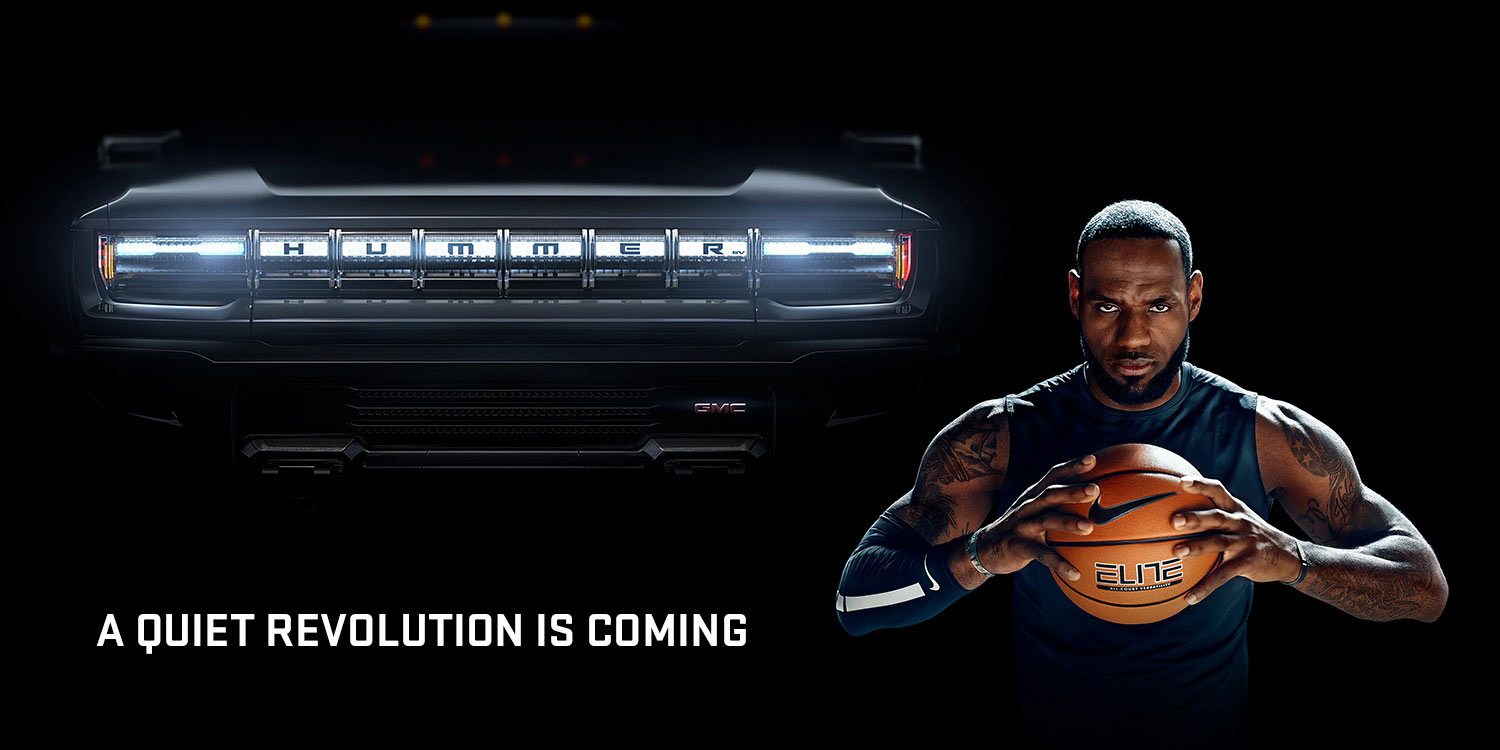 General Motors this morning released the full 30-second television commercial for the upcoming GMC Hummer EV, after teasing short clips earlier this week. While the ad doesn’t reveal any more details or images of the vehicle, it formally introduces NBA star LeBron James as the pitchman, complete with a one-minute, behind-the-scenes video.

In that video, James says that he’s been a fan of the GMC brand for a long time. He then extols the virtues of the electric Hummer that goes into production in late 2021. The GMC Hummer EV promises 1,000 horsepower and 11,500 pound-feet of torque.

In the behind-the-scenes video, James says:

It’s rare that you have a vehicle that’s this big, this powerful, this quiet, and get from zero to 60 in three seconds. That’s extreme. That’s nuts.

A second 30-second spot conveys a message about what it takes to be a “revolutionary” that “can change the world.”

In a press release, James said:

Teaming up with GMC to introduce the Hummer EV is a natural fit. Everyone knows about my love for Hummer since high school and I’m proud to be a part of announcing the new EV model. The truck may be quiet, but the performance numbers speak for themselves.

The 30-second TV spot featuring James is scheduled to air during the second quarter of the big game in the US and during the fourth quarter in Canada.

The GMC Hummer EV will be built in Michigan at General Motors’ Detroit-Hamtramck assembly plant, which will only build electric vehicles. It will be revealed on May 20, 2020.

James is as good a pitchman as anybody. He has a history of liking Hummers. GM went hard with making him the face of the Hummer EV.

But it feels like there’s a disconnect between using the NBA star, the message of quiet power, and the notion that GMC could be considered a revolutionary — about 10 years late to the EV game.

Besides, as long as GM continues to side with the Trump administration in opposition to California clear-air laws, the point rings hollow. Yes, it’s a good thing that GM is trumpeting its newly professed commitment to EVs with a Hummer-James one-two punch. But the messaging so far feels jumbled to me. Maybe it’s all we can expect for GM, in an opening gambit, to introduce the idea of the vehicle and James to the American public on Super Bowl Sunday — and the ideas will jell as the campaign progresses.

Of course, what’s most important in the long run is that General Motors delivers big-time with its zero-emission vehicles showing up in high volume at dealerships. The company has committed $4.5 billion for an entire lineup of EVs in the next three or so years.

We’ll find out more about the Hummer EV as its signature electric model on May 20, when it’s unveiled, if not sooner.