As Electrek reported, Cruise yesterday unveiled its van-like, self-driving, all-electric vehicle. For the past four years, Cruise (a GM subsidiary) has been repurposing Chevy Bolts — including its four-generation self-driving Bolt that doesn’t have a steering wheel. But now GM’s Cruise has the Origin.

The two essential things to consider is that the Origin is the first of many vehicles built using GM’s up-and-coming new EV platform. Second, GM and Cruise want to build the vehicle on a massive global scale.

While Cruise executives declined to provide specs for the new electric powertrain, I asked Carl Jenkins, vice president of hardware at Cruise, if the Origin’s battery pack is the same size as the current Bolt. “It’s going to be bigger than that,” he replied.

That’s a good thing, considering the size of the Origin vehicle, and its need to power a lot of compute. So we can be optimistic that GM will push beyond the Bolt’s current 66-kilowatt-hour capability.

Jason Fischer, chief engineer, added, “This is absolutely not the Bolt EV pack. This is what GM is coming out with our future electric vehicles.” A GM spokesperson made the connection between the Origin’s electric platform, the tie-up with LG Chem for a massive battery plant, and a set of new EVs, including an electric pickup.

The Ohio-based GM-LG Chem battery plant will have 30 GWh of annual production capacity. Fischer added, “I can tell you that we’ve increased efficiencies year after year.”

Add it up and you get bigger, more efficient packs and powertrains produced in high volume.

The reveal of Origin in San Francisco

In his opening remarks, Dan Ammann, Cruise’s CEO, made it clear that a pure electric powertrain was essential to his company’s shared autonomous ride-hail vehicles. He said, “The first thing you do, of course, is to get rid of the whole fossil-fuel burning thing.” Between dumping an internal-combustion engine and eliminating a steering wheel and dashboard, it opens the possibility for a new type of vehicle design.

For example, it allows for a flat floor. According to Jenkins, that was important, because passengers making a run to the airport want to put their bags in front of them. The Origin is a six-seater that will commonly be shared by multiple passengers.

The Origin might look like a futuristic concept vehicle, but it’s real. “This is a fully engineered vehicle that’s on its way to production,” Ammann told me. His business plan is ambitious. While the self-driving ride-hail service will start in San Francisco, Cruise has big, global ambitions “Our goal is to replace a lot of the travel that’s happening in the United States and around the world,” he said.

The company needs to reduce the cost of the Origin. And one way it’s doing that is to leverage GM’s new EV platform. “The most expensive part is obviously the electric powertrain,” said Jenkins. “That’s shared with the rest of GM’s whole fleet of new applications using this powertrain. The fact you don’t have the 100% burden for the EV powertrain is massive for us.” 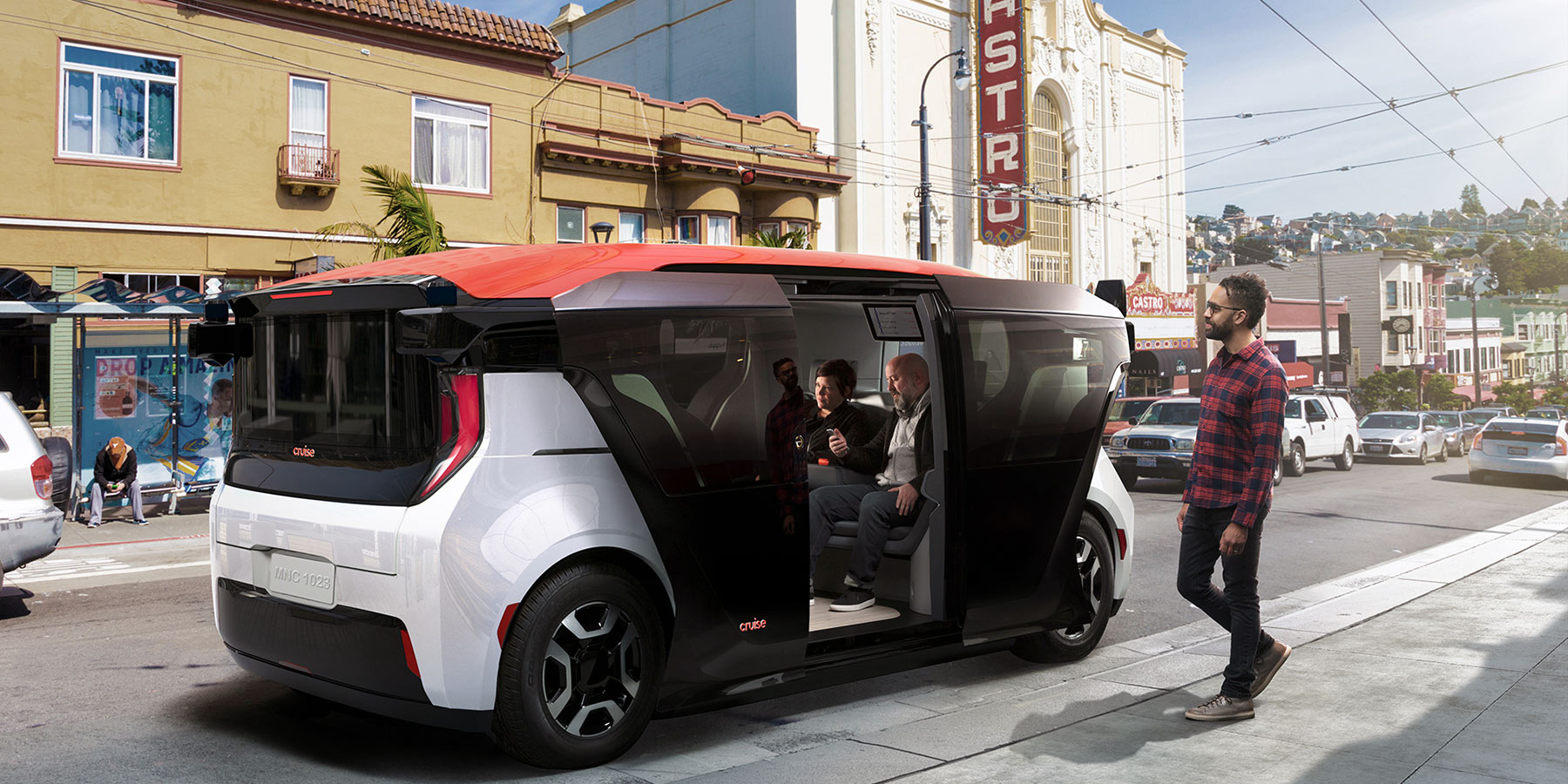 Based on our conversations with GM and Cruise, we can also report that the Origin will have DC fast charging. And while it’s a manual process at this stage, it will become automated. Fischer said, “In the lifetime of the vehicle, you there will be many technologies that will come out that may not require a human to constantly charge this vehicle.” Perhaps he’s talking about inductive, wireless charging, or maybe a robotic charger.

Regardless, it reveals how electrification and autonomy go hand in hand. And GM has big plans for both.

The Bolt has not been the game-changer that GM wanted. Despite its excellent combination of range, price, and driving manners, sales have been sluggish.

But just as Cruise is making a shift from the Bolt and its aging EV platform, GM, in the broader sense, is moving on to a new, more robust EV platform.

Of course, it’s easy to make grand pronouncements about mass-scale production and global deployment. Still, GM’s billions invested in Cruise, followed by Honda’s additional $2.75 billion, shows the level of ambition for the project. Now, with the introduction of the Origin as the first vehicle to use GM’s new EV platform, the dots for a serious EV campaign from The General are starting to align.