The EPA released the official range of the Porsche Taycan Turbo and it only gets 201 miles of EPA-rated range – a lot less than the 280 miles of range originally announced.

The German automaker talked about a range of “up to 450 km” (280 miles), but that’s on the WLTP standard, which is known to not be as representative of real-world range as the EPA rating.

Now the EPA has released its first rating for the 2020 Porsche Taycan Turbo and it gets 201 miles of range and a 69 MPGe for combined city and highway driving.

That’s 42% less range than the Tesla Model S Performance, which has been described as a close competitor to the Taycan: 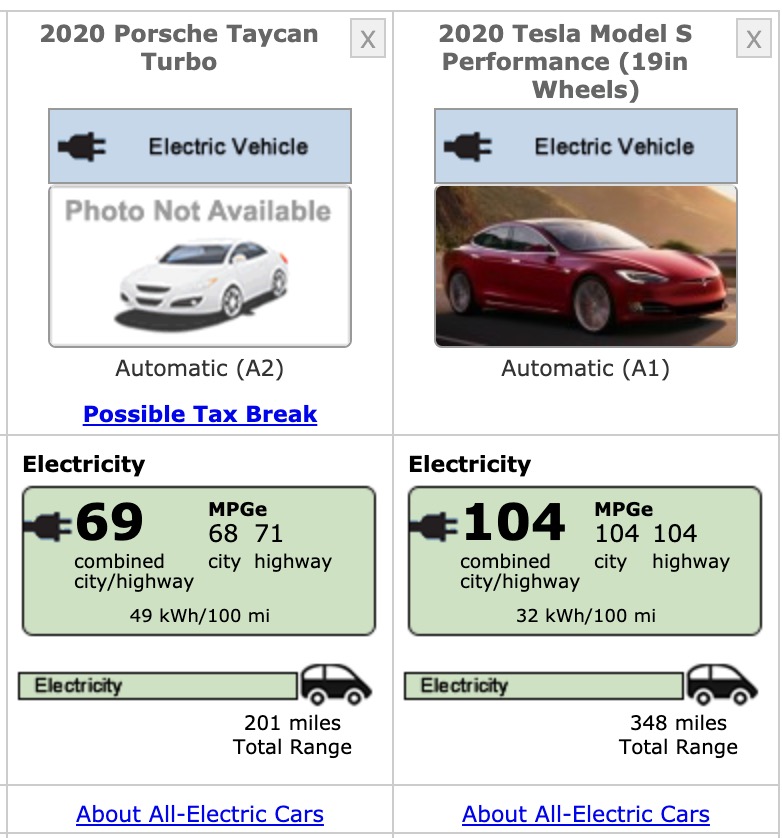 It shows a massive difference in efficiency between the two vehicles since they have almost the same battery pack capacity: 93.4 kWh for the Taycan and 100 kWh for the Model S.

The EPA says that the Porsche Taycan takes 49 kWh to travel 100 miles, while the Tesla Model S takes 32 kWh to travel the same distance.

Porsche is planning to launch a more efficient and longer version of the Taycan, the Porsche Taycan 4S, next year.

This is lower than I expected from the WLTP rating and also just looking at the specs.

We are talking about a car with great aerodynamic performance (0.22 cd) and almost 100 kWh of energy capacity.

Also, that’s the Turbo. The Turbo S should get an even lower rating, which means that Porsche might need to advertise it in the US at less than 200 miles of range.

Hopefully, like Audi and Jaguar before them, Porsche’s efficiency is so bad because they are being conservative with their energy capacity that they let people access in the Taycan.

We don’t know that for a fact, but I believe it could be an important factor.

Like Audi and Jaguar, maybe they could relax those buffers and improve efficiency in the future as they get more confident about their battery packs.

In the meantime, I’m curious to see what the EPA rating of the Taycan 4S will be.