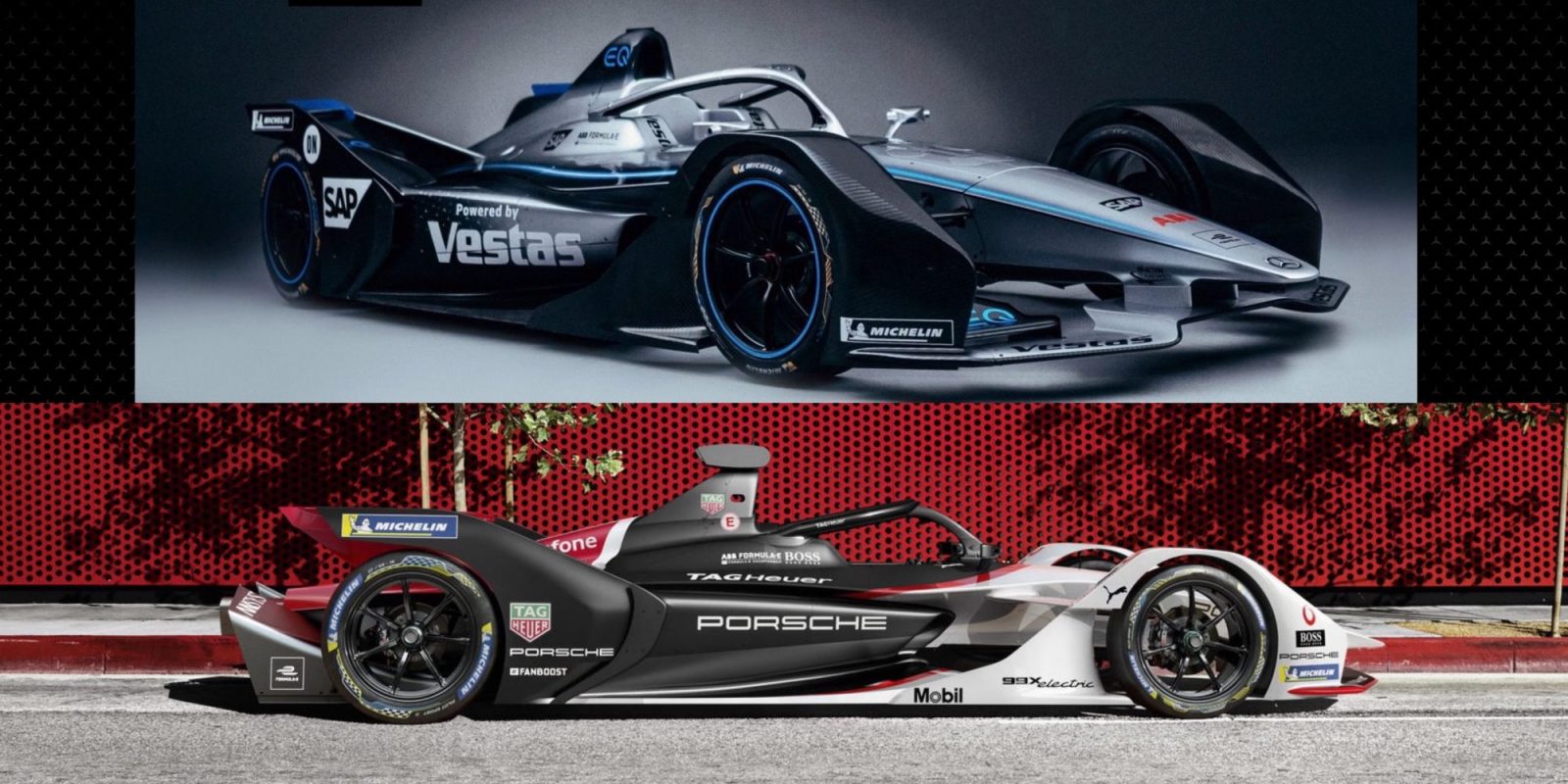 The last Formula E season was the most exciting one yet, so tune in this weekend to see if they can manage to top it. There will be two races this weekend, on Friday and Saturday at 8 a.m. PST/11 a.m. EST/4 p.m. UTC/7 p.m. local Diriyah time.

Last season started with a new faster and more capable car and culminated in a championship win by Jean-Eric Vergne and Techeetah at the season closer in New York City. The season featured close racing, crazy circumstances (even hail during one race), and unpredictable finishes — the first eight races were won by eight different drivers from seven different teams. This season promises to offer similarly great action, with few changes from last season.

It’s a big year for Formula E as two big new teams are joining in. Porsche and Mercedes-Benz, both of which have long ties to motorsport, are fielding official entries into the series. You can see each of their cars in the photo above.

Last year, Mercedes had a partnership with team HWA Racelab, but they were not an official Mercedes entry. HWA had a rough season, finishing ninth place out of 11, with only a single podium finish and being one of three teams to never win a race.

Mercedes will hope to fare better this year with a full team entry. They’ve been getting used to success with several years of Formula One dominance. Mercedes even floated the idea of bringing F1 World Champion Lewis Hamilton over to Formula E, but Hamilton quashed that rumor in a press conference last month.

Porsche has also been planning an entry for a while, and this weekend the time has finally come. In 2017, Porsche announced they would be ending their Le Mans program in favor of Formula E development, which came as a surprise, as Porsche had won three 24 Hours of Le Mans races in a row.

At the time, Porsche also did not have a consumer electric car, which only added to the surprise. Now the Porsche Taycan is out, so Porsche has some incentive to show off their electric car-racing chops.

This makes the Formula E grid quite crowded, with 12 teams and 24 cars, and more manufacturer-supported teams than any other racing category (Audi, BMW, DS [Peugeot/Citroen], Jaguar, Mahindra, Mercedes, Nissan, and Porsche… and NIO and Venturi, if you count those).

Other teams are changing around a little — Venturi, who produced their own powertrain last year but had reliability problems and came in eighth place with three podiums and one win, will use a Mercedes powertrain this year. HWA also used Venturi powertrains last year, but since that team has changed to Mercedes, this means Venturi will no longer make powertrains for the series.

The NIO team has also undergone a change in management but will retain the NIO name, and will use last year’s GEOX Dragon powertrains. The two teams finished in 10th and 11th place last year.

New seasons of motorsport often come with rule changes.  Last year, there were major changes, including lots of new rules and a brand-new car. This season’s changes are much more minor.

First, qualifying will become more important. The current qualifying format sees four groups of five drivers each go out to set fast laps, and the top 5 times overall go on to a “super pole shootout” for the top 5 grid positions during the race. The winner of the super pole shootout gains 3 championship points. This year, another point will be given out to the fastest driver from the qualifying group stages. Last year’s qualifying format produced some controversy among drivers, so we can expect that whinging to continue sometime mid-season.

In terms of technical changes, cars with two electric motors are now banned. It is believed that Nissan was the only team using dual motors last year, though Nissan never confirmed this publicly.  If so, this is too bad, considering they had a rough start to last season but finished relatively strong. Now they’re back to the drawing board.

There have been some attack mode and full course yellow (FCY)/safety car (SC) changes. Attack mode receives a minor increase in power, which should make strategy in its use even more important. But attack mode can no longer be activated during FCY/SC conditions. Also, during FCY/SC, cars will have energy deducted from their 54kWh race allowance, so that races with long stoppages still retain a focus on efficiency during the race.

We’ve got some new and returning drivers this year, along with a few who have shuffled teams.

Porsche enters the series with Andre Lotterer and Neel Jani. Lotterer raced in championship-winning Techeetah for the last two years, and Jani formerly raced with Dragon racing, though only for one race weekend in 2017.

Mercedes’ new team continues with Stoffel Vandoorne, a fan favorite who raced with HWA last year. In their other seat will be rookie Nyck de Vries, the reigning Formula 2 champion.

GEOX Dragon has a new slate of drivers, with two rookies, Brendon Hartley from WEC and Nico Muller from DTM (a German touring car series). James Calado, another rookie, joins Jaguar in the place of Alex Lynn. And Ma Qinghua, who previously raced for Techeetah and Aguri, returns to race for NIO.

A few other drivers have shuffled from one team to another. Maximilian Gunther moves from GEOX Dragon to BMW, and Antonio Felix da Costa moves from BMW to Techeetah.

The Formula E race calendar has gone through some changes since it was first announced last year, mostly due to conflicts with the World Endurance Championship (WEC), a series in which many Formula E drivers also race.

We’ve got two doubleheaders at Diriyah and London to bookend the season. The London ePrix returns and takes New York’s spot as the season closer. London’s race will be held in an indoor-outdoor space, which is a first for motorsport. Because electric cars emit no exhaust, indoor races aren’t a problem.

In addition to the London race, we’ve got new races in Seoul and Jakarta. The Seoul race is planned in the area of Gwanghwamun Plaza/City Hall Plaza, and the Jakarta race is planned around the city’s National Monument in Merdeka Square.

In total, the series is one race longer this year than last year, though with the same number of venues, since there are two doubleheaders compared to last year’s one.

So, how do you think this season will turn out? Will Mercedes be able to dominate Formula E the same way they’ve dominated Formula 1? Will Porsche throw a wrench in their works? Can Nissan (formerly Renault e.dams) bring back the glory days as the only team to win repeat championships? Or will Techeetah and Audi continue duking it out for the top spots as they have for the last couple years?  Tune in this weekend for some exciting electric racing to find out!