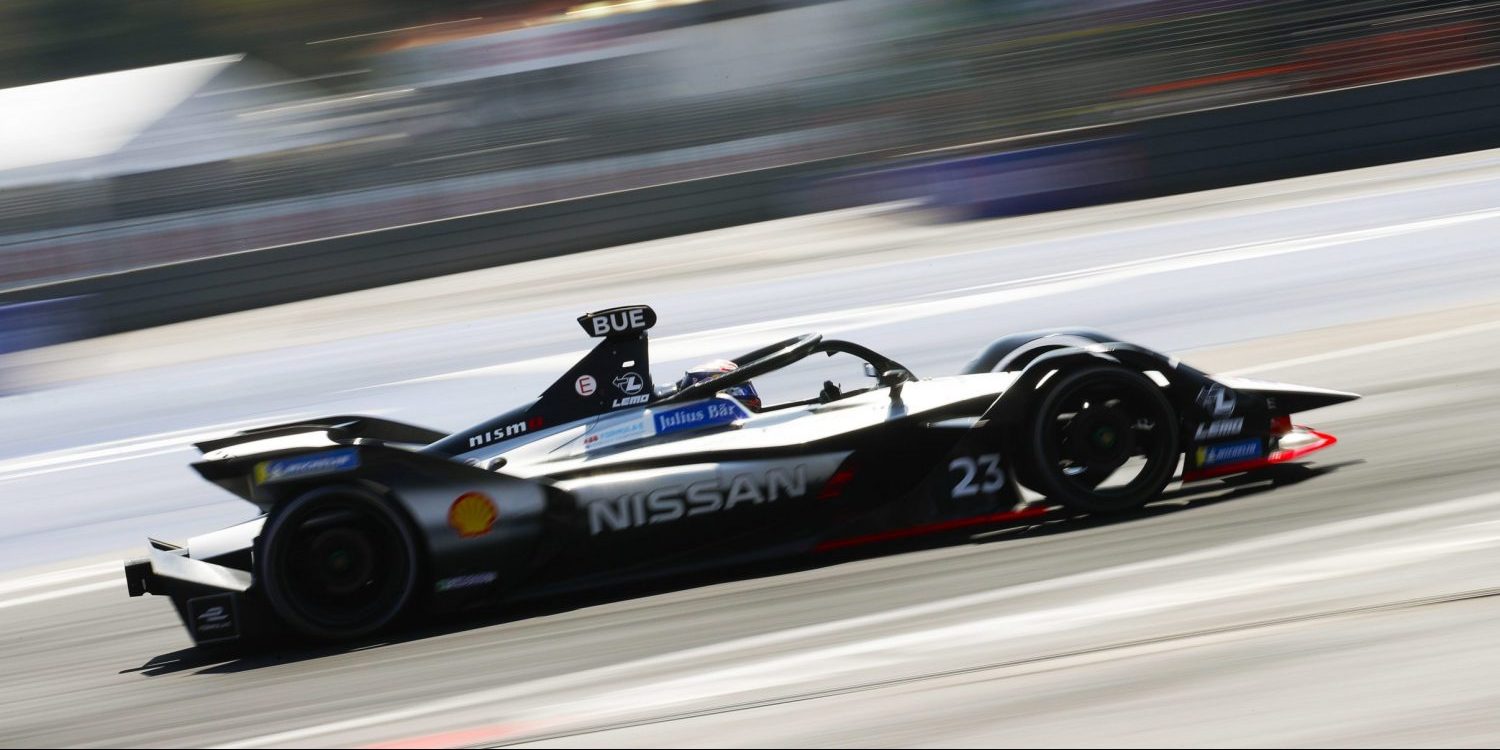 This is the first of two race weekends in China this year, the next being scheduled two weekends from now on March 23rd in Sanya, the southernmost point in the country.

Before we talk about last race’s results, here’s the full race on Formula E’s YouTube page. Have a watch if you’d like. You can also visit the bottom of this post for a shorter video of race highlights.  We’ll discuss the race recap after a little news from the past week.

In other news since the last race, Formula E just announced that next year they will hold an indoor-outdoor race at the season finale in London.

Previously, the London ePrix has been held in Battersea park. But next year, the race will happen in and around the ExCeL exhibition center.

Formula E is billing this as the first ever “indoor-outdoor motor race.”  Formula E is uniquely capable of doing this type of race, because the lack of exhaust makes ventilation less of an issue for spectators watching cars race indoors. 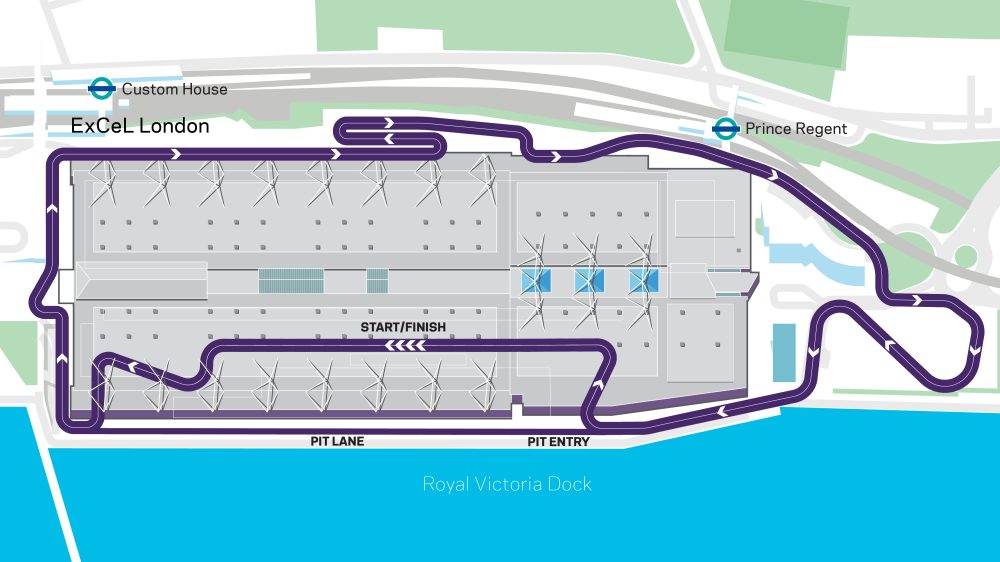 We also had a few announcements from the upcoming Mercedes-Benz and Porsche teams, both entering the series next year. The competition is getting quite full with manufacturers at this point, as they join Audi, BMW, DS (Peugeot/Citroen), Venturi, Jaguar, Nissan, Mahindra and NIO who all have teams this year.

Mercedes-Benz teased their car’s concept livery by rolling out a demo car at the Geneva Motor Show:

And just yesterday Porsche conducted its first test of its car at its development track in Weissach, Germany.

Another week, another crazy race. This time, a slightly boring middle of the race was sandwiched between an exciting start and an exciting end.

Qualifying produced one particularly notable result: fan favorite Felipe Massa placed third.  Massa is a longtime Formula 1 driver who is a “rookie” in Formula E this year – though this is a strange word to apply to someone with 272 Formula 1 race weekends under his belt, the 6th longest F1 career in history.  He’s been having some trouble getting going since landing in Formula E, with some poor results so far, so it was good to see him on form for once.  Pole position went to another rookie, and another ex-F1 driver, Pascal Wehrlein.

The race started off predictably enough with Wehrlein, who managed a podium in his first Formula E race finish at the previous race in Chile, driving off from pole and gaining a lead of several seconds.

This didn’t last long however, because behind him there was a large crash where Piquet hit the back of Vergne and Sims.  The track was littered with debris and race control put out the red flag.

After an extended delay with all cars heading to the pits, the race started back up with 40 minutes left on the clock.  While the safety car led the cars around the track for a few laps, an interesting strategy point emerged.  It seemed as if just about every team wanted to restart the race with attack mode enabled.  Restarts are the easiest place to gain or lose places, so having that extra 25kW is critical.

Just before the safety car came in, most drivers activated attack mode, but a few mistimed it and activated it a lap early. This wasn’t so bad for the restart, but a couple minutes later their attack mode ran out while the cars behind them still had it activated, which left the vulnerable while the cars were still all within attacking distance of each other.

After this, the race settled in for a while.  Wehrlein led the race handily from pole, with Rowland and Di Grassi behind him for most of the race.  Until the end, that is.

As the race got closer to the end, we saw the gradual activation of attack mode starting with cars closer to the rear of the pack, then the car in front of them would activate it, and so on.  Buemi nearly lost 4th place while driving off-line to activate his attack mode, and a few laps later Rowland did lose a place while activating attack mode.  This put him into a battle with his Nissan teammate Buemi behind him, which ended up with them touching in a corner.

In front of them some drama was playing out as Wehrlein, who had led the race so easily from the front, was getting low on energy.  For the last several laps of the race he had to lift-and-coast in order to save energy in the braking zones, shedding time to Di Grassi behind him.  He defended hard until Di Grassi took the inside line to pass Wehrlein going into one of the chicanes, they touched and Wehrlein cut the chicane, saving himself both time and energy.

A lap later the race would end in dramatic fashion, with Wehrlein running out of energy just as he came out of the last turn, having to coast over the finish line while Di Grassi barely snuck past him on the inside, crossing the line first only having led the race for probably less than a second of the 45 minute duration of the race. But it was the second which counted.

In the end, Wehrlein was penalized for cutting the chicane anyway, finishing 6th.  Many other cars finished with just 1% energy left, and the Nissan boys both had to stop on track after underestimating their energy requirements.  They started the last lap in 3rd and 4th and ended the race in 20th and 21st.

Of note, former F1 driver Felipe Nasr did poorly in his first Formula E debut, finishing 19th.  Vandoorne was unable to capitalize on his fan popularity, finishing 18th and still on 0 points for the season despite winning FanBoost in every race yet.  Massa picked up his first points of the season, but only 4 points, finishing 8th after his 3rd place start.

And Jerome D’Ambrosio had a stellar performance, probably the driver of the day, starting in 18th and finishing the race in 4th place.  As a result, he’s currently in the lead for the championship.

Audi finished this race showing that Mexico City is their favorite track.  Out of 4 ePrixs there, Audi has crossed the finish line first in each one (though they were disqualified once).  Mahindra seems to have the opposite fate in Mexico, as last year their driver Felix Rosenqvist looked like he was going to win but then was forced to retire due to mechanical issues, and this year Wehrlein lost his win due to energy issues.  BMW showed again that they have a fast car when they can finish, with Da Costa coming in second but Sims limping home in 14th after being affected by the early crash.

Despite this race seeming fairly slow from a spectator’s perspective, and this track being pretty bad for overtaking, there were still 90+ overtakes over the course of this race.  Comparing to the Formula 1 race at the same venue, Formula E had almost twice as many overtakes in a race that lasted half as long.  Even in Formula E’s “boring” races, there’s still lots of action.

Last year’s Hong Kong ePrix was the season opener, and a double-header race, with two races on two consecutive days.  The track, is the Hong Kong Central Harbourfront Circuit.  After a brief break from city streets, visiting a “real” racetrack in Mexico, we’re back on Formula E’s typical recipe: a temporary track in a harborside location.  And why not?  The spectators seem to love it.

Mahindra has run well here in the past, with two podiums and a race win (after a technical disqualification for the Audi team) in the three times the race has been run.  They’re currently leading the championship and have two solid drivers in D’Ambrosio and Wehrlein, so they’re a team to watch.

Speaking of Wehrlein, he seems to have extraordinary speed and is taking well to the car.  However, his inexperience showed in the last race when he ran out of energy.  While he did his best to manage it near the end, a more experienced driver may not have had that problem, and may have saved himself several places.  Nevertheless, he looks well-poised to do well in the championship, despite missing one race and being crashed out of another.  He’s only 5th at this point but a few solid finishes could change that quickly.

The last race was a bit of an anomaly when it comes to energy issues, as extra time was added to the race after the red flag and it seems to have spoiled a lot of teams’ strategies.  We don’t expect energy to be an issue in Hong Kong, but anything could happen.

As for teams, Mahindra, which has been more of a mid-pack team throughout the history of Formula E, is having a great season and has put themselves into the equation for the championship this year and looks like they have a reasonable chance of keeping their lead.  Their longtime leader, the emotive Dilbagh Gill, is a paddock favorite and it’s good to see the team he’s put so much passion into running so well.

But the season is still early and other teams definitely have a chance.  We’re still waiting to see if BMW can leverage their quickness into consistent results.  Audi and Virgin still have a chance, as does DS Techeetah if they can keep their drivers from crashing into each other.  Nissan, who took over the Renault e.dams team which has done so well in the past, seems to be having a bad time and will have a hard time recovering from the bad start to their season.

The Hong Kong ePrix is on Sunday March 10th.  The race starts at 8am UTC, 4pm local Hong Kong time, 12am PST/4am EDT (*daylight savings time will have taken effect on the East coast, but not the West coast, by then).  Head to Formula E’s website to learn how to watch the race in your country.