Part 1: Things you should know when scavenging for electricity

North America has two ubiquitous 120V outlets. The most common is formally called a “NEMA 5-15 receptacle”. Under the NEMA naming scheme, the number after the hyphen indicates the max amps for the outlet. So for this little guy, that’s 15 amps max it can offer. Because of the 80% rule though, your EV will only draw 12 amps (maybe less, see below) from a 15 amp outlet.

On a long march to becoming equally ubiquitous is the 5-20, which looks similar to the standard 5-15 above, but with a little perpendicular line. 5-20 outlets are found places likely to see heavy power uses. So you see them on building exteriors, garages, and bathrooms. They’re everywhere really, and they offer 20 amps max, so 16 amps continuous to your EV, if you use a 5-20 plug. (Spoiler: Tesla is the only OEM that offers one). If you plug in a standard 5-15 plug into a 5-20 outlet, you’re still only going to draw the 12 amps.

Both of the above are 120V, but we’ve also got 240 outlets throughout North America. Wikipedia has a useful chart, and we won’t bother with images here, but here’s the highlights you should know: 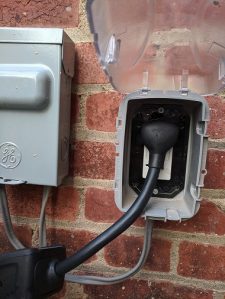 Tesla plug fits snug inside an outlet with enclosure

Most important is versatility, which obviously includes the range of outlets available you can draw from. If you get a new job, and there happens to be a welder’s outlet you’re free to make use of, will you be able to? If a friend invites you to their old country cabin with an old dryer outlet in the garage, will this be useful to you? Electricity is all around us and you want your EV to drink that milkshake as fast as it can.

You should also look to physical size of the plug. With a fat plug, you’re going to have a massive letdown with outdoor outlets protected with an enclosure like the one seen here.

Of course, the charging cord needs to be rugged and survive being covered in ice or hit with torrential rain. Aside from Tesla’s Gen2 UMC we haven’t seen long term evaluations of OEM charging cables used outside extensively, so share below in the comments if you can offer insights.

As an FYI there’s lots of tables out there that purport to show how many miles per hour of range you’ll get at different V & A levels. Be wary, and compare against more sources. There’s tons of incorrect data out there.

Finally, a good portable charging cord (one that can handle up to 240V at 30 to 40 amps and everything below, as some OEMs now include with their EVs) means you don’t have to buy a dedicated, hardwired, wall-mounted EV charger for your home. And that’s the way it should be. It’s a nice to have, like heated tiles in your bathroom, but certainly not a must-have. For many people, the perception that you need a hard-wired special charger for your house is a barrier to buying an EV. Being able to tell people they don’t need anything special, maybe just a dryer outlet if they have a long commute, is an important message to encourage EV adoption. 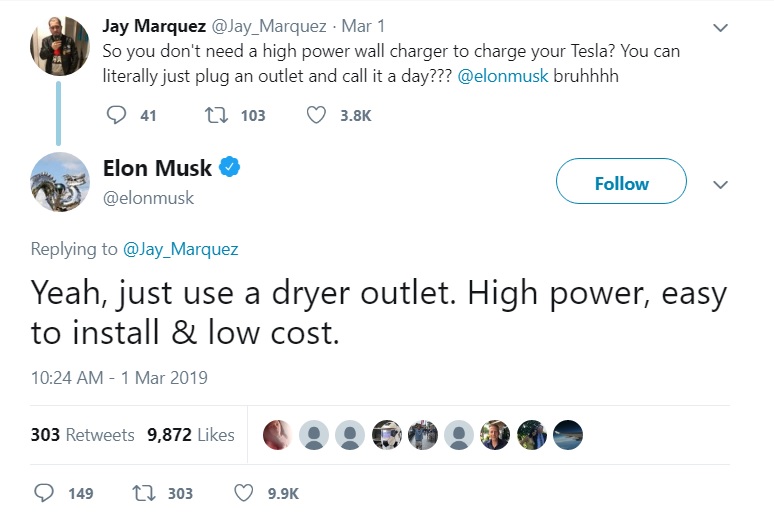 Review (A+): The rugged and versatile Tesla Gen2 UMC 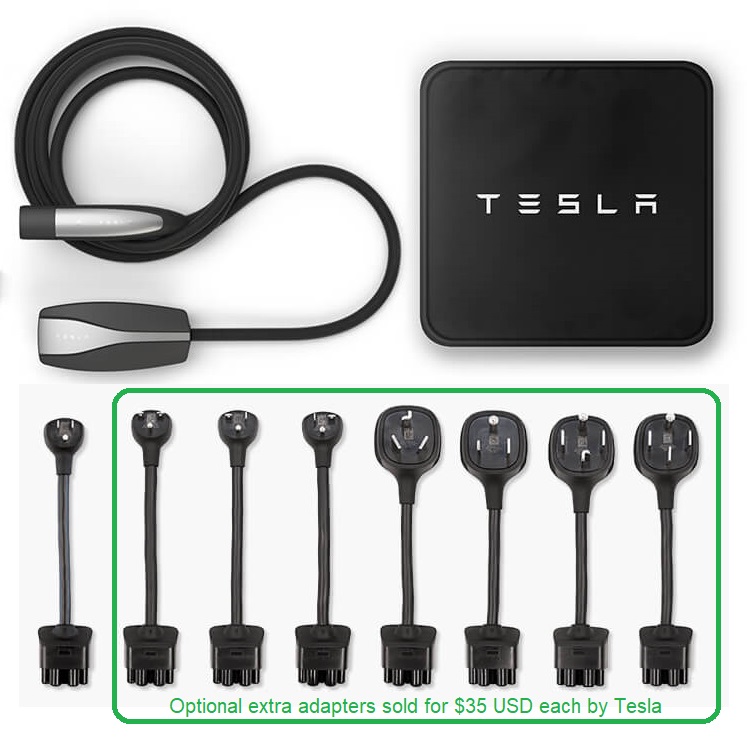 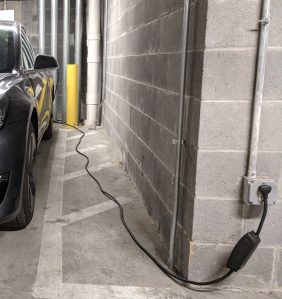 There’s no sense beating around the bush. This is it folks. The gold standard from which all others will be compared. The Gen2 UMC comes included with every Tesla, along with the standard NEMA 5-15 adapter (Teslas used to also come with the 14-50 pictured on the far right as well as the 5-15, but no longer, now it’s a $35 extra.) On a Model 3, you’ll get 5 miles per hour of charging from the 5-15 (120V * 12A), so 60 miles of range with a 12-hour overnight charge. Not enough? I recommend to everyone to also spend the $35 and buy the 5-20 adapter. Now we’re up to 120V * 16A, which gets you 7 miles per hour of charging (40% more!). That’s 84 miles of charging overnight from an outlet you probably already have in your driveway at home or at work. The Gen 2 UMC supports up to 240V at 32A (7.7kW), enough for everyone but extreme grinders, and also the maximum that the Model 3 Standard and Mid-Range trims even allow. The Model 3 Long-Range, Model S, and Model X have higher capacity on-board AC inverters that can support 240V at up to 48amp (11.5kW), but to get those extra 16 amps that the portable Gen2 UMC can’t provide, you’ll need to purchase a wall-mounted charger hard-wired to a 60amp circuit to your panel. For context, modern North American homes typically have 200amp service. 60 is a lot to dedicate.

Other points about the Gen2 UMC:

We do have one criticism for Tesla: please correct your product page for the Gen2 UMC! At the time of this writing (and a long time prior), it’s been listed as only providing 1.3kW, or about 2-3 miles per range per hour. What the hell? It can do 7.7kW (240V at 32A), getting 22 miles per hour of range for a Model 3. 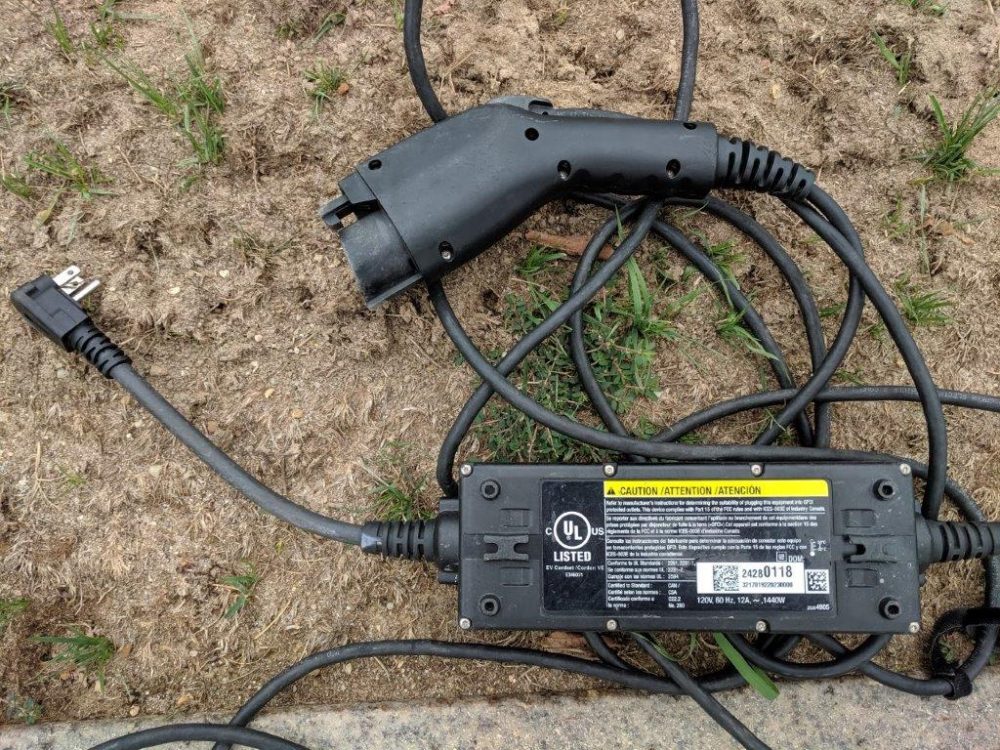 GM should never be allowed to claim it’s “all in” on EVs until they can fix this sadness. Pathetic: 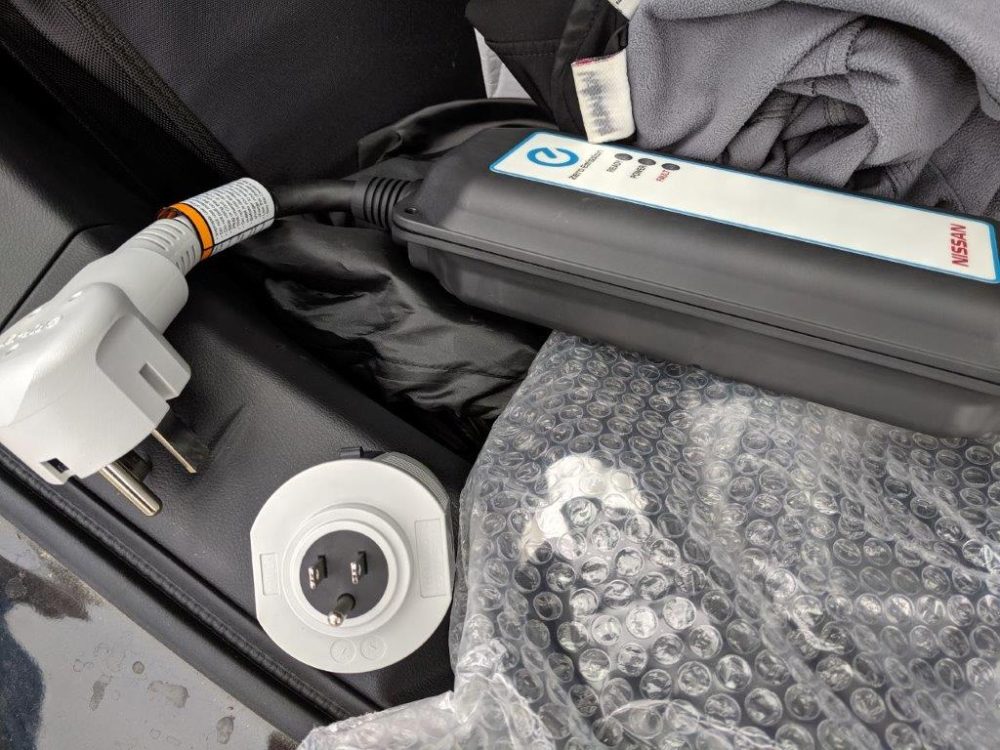 If you buy the Nissan S & SV models, you’re going to get a sad 120V-only charging cord with the car. Unfortunate. But at least unlike the Bolt, the car will accept whatever amperage the pilot signals, so you can upgrade by buying a third party charging cord.

With the Nissan Leaf SL and Nissan Leaf Plus, however, Nissan will give you a respectable portable charging cord. Let’s see how it compares with Tesla: 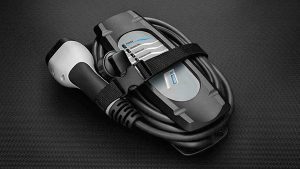 If you buy a BMW i3, it’ll come with what BMW worryingly calls its “Occasional Use Charger (OUC)”, pictured above. 120V NEMA 5-15 only. Do you void your warranty if you use it nightly? How many amps do you get? Who knows! According to forum posts, a 2014 OUC could get the 5-15’s standard 12 amps, but for 2015-2016 model years, BMW downgraded to 10 amp. Supposedly now we’re back to 12 amps? But be careful! Another forum poster noted their dealer just grabbed one out of a bin, and apparently it was not for their year. Anyway, clearly zero cares given. 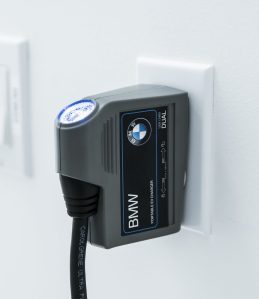 Now we’re cheating a bit here, because this BMW portable charging cord, called the “Turbocord” appears to be a $500 option and not standard issue. But we can’t help but gawk at this garbage. It looks like BMW tried to step up, but instead released something spectacularly awful: 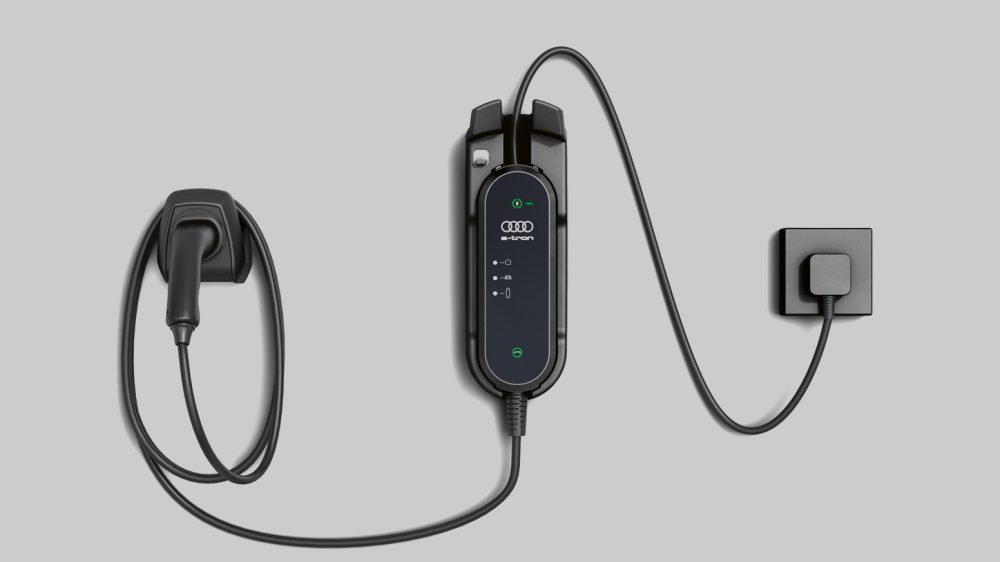 Shown here with the wall mounting kit (extra), we like it a lot. It’s the most handsome.

Another big point is that the brick portion (control unit) of the cord gives you a lot more information than the Tesla UMC. It’ll actually spell out “50%” charge, and then “100%” charge when those numbers are hit. I can’t list this as a pro or con, because I think it’s subjective to your lifestyle. If this is going to be used at home and taken to the lake house, then sure, that’s a nice feature, especially for an older set who may not be big fans of phone apps. For myself, I use my portable charger daily in urban streets, I’d prefer not to have any buttons or information readouts on my charging cord. In any event, I strongly support what Audi did here. It’s so important that people understand they don’t need a separate hard-wired wall-mounted unit from a company they never heard of. So Bravo Audi! I can’t imagine why any Audi customer would buy a third party wall mounted charger when the included Audi charger looks so nice, offers 9.6kW, and has a nice wall mount. 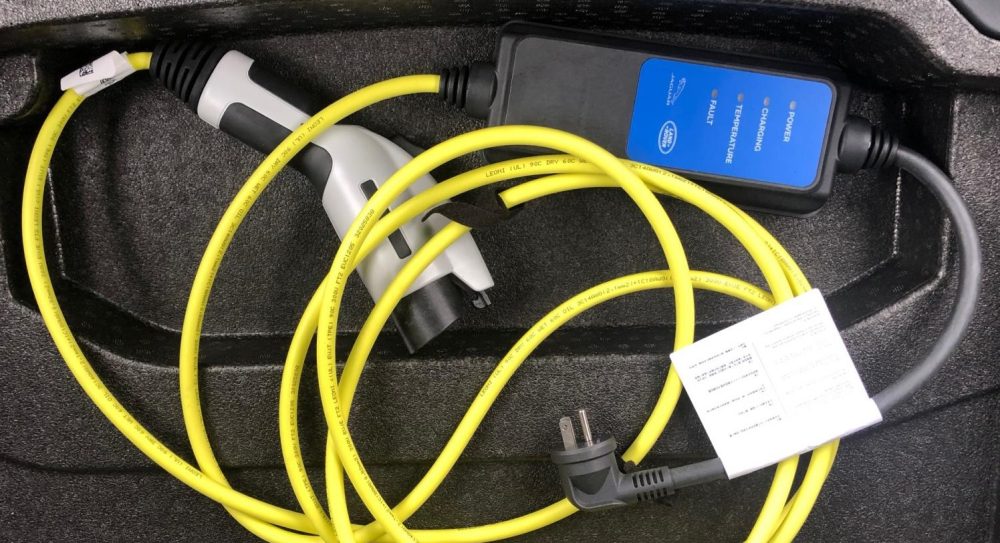 Completely unacceptable for a BEV starting at $70k. This might be the worst:

According to posts on the I-Pace forum, the following message was sent to Jaguar dealers on July 13, 2018:

What else in the I-Pace received zero thought or consideration?

Our own Seth Weintraub did a video review of the Hyundai Charging Cord when reviewing the Hyundai Ioniq EV:

The charging cord only does 120V, 5-15 outlets, at 12 amps. As Seth notes, given the high efficiency of the Ioniq, those 12 amps at 120V get you 5 miles per hour of range when charging, same as Model 3. But that won’t translate to the less efficient Kona EV, where we’d expect 3-4 miles per hour of charge. And it’s frustrating that you’d likely have a 5-20 outlet sitting in your driveway, and you can’t take advantage of that extra 40% charging for lack of a simple 5-20 adapter? You’ll want to buy a third party adapter.

When Porsche brought the Taycan to Niagara Falls for its unveil, our own Fred Lambert was able to snap what looked like a beast of a charging cord, pictured above. A search of the Porsche website turns out its called the Porsche Mobile Charger Connect (PMC-Connect), and it’s pictured alongside a charger that looks just like Audi’s and is referred to simply as the “Porsche Mobile Charger” (PMC).

It’s a shame some OEMs are still providing portable charging cords without any thought or effort. If their plan is to just tell potential customers to install a hard-wired wall unit, they’re seriously handicapping their EV sales, and EV adoption. Americans move residences a lot. People who don’t mind installing wall units underestimate how much others see it as a barrier.

Finally, if you’re considering an EV that comes with a garbage charging cord, we recommend looking into third party portable charging cords, as opposed to a wall-mounted unit. And if you want the Tesla versatility of connecting to almost any outlet, we suggest (not sponsored in any manner) the “JeslaJR” for $499 from QC Charge in California. It’s a Tesla Gen2UMC modified with the standard J1772 on the end so you can use it with other EVs.