A recently released study from the University of New Mexico asserts that sea level was as much as 16 meters (52 feet) higher 3 million years ago, during the Pliocene era, when the temperature was a few degrees hotter. The study looked at deposits in coastal caves in Mallorca, Spain.

So how does this relate to current-day global warming? Writes IFL Science:

“We can use knowledge gained from past warm periods to tune ice sheet models that are then used to predict future ice sheet response to current global warming,” said study coauthor Bogdan Onac.

Even if atmospheric CO2 stabilizes at current levels, the authors note that global sea levels will probably still rise to previously seen levels, if not higher. The data indicate that ice sheets are “very sensitive” to warming and provide important calibration targets for future ice sheet models.

So, understatement of the week: Hurricane Dorian was seriously rough. It knocked out power and caused severe flooding and power outages along the coasts of Florida, Georgia, and the Carolinas, but that pales in comparison to the decimation it caused in the Bahamas.

Grand Bahama, home to 50,000 people, is 70% underwater, and the storm has left at least 30 people officially dead across the Bahamian islands (but the loss of lives there is expected to be much worse).

You have expressed mixed feelings over the years about climate change and about the role that human activity plays, but sure seems like these hurricanes are getting bigger, stronger, more intense. Do you see a connection?

(By the way, Dorian broke all sorts of records: Check out this Washington Post article for all the horrifying firsts. The warming climate is indeed likely making hurricanes more powerful and more destructive.)

Well, first off, we know the climate’s changing, and then we know our storms seem to be getting bigger. I mean just in the last four years as Governor, I had four of them. Now we have them — my first year out as governor.

So we don’t know what the cause is, but we’ve got to react to it. I mean, we put money into dealing with things like sea-level rise, more mitigation, and things like that. So we’ve got to continue to figure this out.

Perhaps NASA can enlighten Scott on what the cause is: “Multiple studies published in peer-reviewed scientific journals show that 97% or more of actively publishing climate scientists agree: Climate-warming trends over the past century are extremely likely due to human activities.” (Underline is mine.)

Or maybe Scott could have a chat with CNN meteorologist Chad Myers, a self-described former “climate skeptic.” He explains in the below video (via Climate Watcher on Twitter) what the “one big number” was that ultimately changed his mind:

I used to be a climate skeptic. This fact changed my mind

The climate-crisis CNN town hall took place on Wednesday. Ten Democratic candidates were interviewed by members of the public and network anchors, back-to-back, over seven hours. 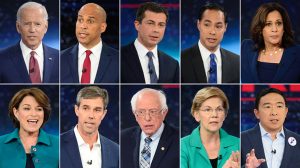 Check out our Electrek Green Energy Brief (EGEB) from Thursday, September 5 for a round-up of 5 green energy takeaways from the town hall. You can read further details on Cory Booker’s and Elizabeth Warren’s climate-crisis action plans from our Wednesday, September 4 EGEB, and details of Bernie Sanders’ $16.3 trillion Green New Deal plan from the August 23 EGEB. (Joe Biden also said green energy workers should get a $25 an hour minimum wage; we covered that on August 27.)

James Mattis, who served as secretary of defense in the Trump administration and resigned in December 2018, weighed in on climate change on Thursday in an interview with Andrea Mitchell on MSNBC (and yes, he believes in it):

Let me talk to those for a moment who are skeptical of climate change… For those who are adamant there is no climate change — you look at the receding sea ice and have different explanations — why wouldn’t we take out an insurance policy and do prudent steps to make certain the generation that’s coming up is not going to be caught flat-footed by this? It’s a national security issue… it’s a reality we’re going to have to deal with.

Everyone feels sad and frustrated when they see a photo of wildlife caught in plastic six-pack rings. So beermakers, from giants like MillerCoors and Carlsberg to microbreweries, are finally doing something about it by experimenting with sustainable materials.

As Fortune reports, “Carlsberg, for example, is using glue to adhere cans in a production method that the Danish brewer says would avoid using 1,200 tons of plastic annually, or the equivalent of 60 million plastic bags, once fully adopted.”

Delray Beach, Florida’s SaltWater Brewery trailblazed by working with E6PR to make the first eco-friendly six-pack rings. “The rings developed by E6PR are now used by 35 brewers across the globe, including in Africa, Europe, and Australia.”

So is this initiative going to make any difference? Fortune continues:

“Is the six-pack ring the biggest issue in the ocean causing the biggest problem? No,” says Dustin Jeffers, cofounder and head of operations for SaltWater Brewery. “But it is something that people interact with every day, and they are a problem.”

(In my opinion, I agree with Jeffers. Every step makes a difference.)

To drive home the point, the graphics journalists over at Reuters brought home just how much plastic we’re using in some seriously mind-boggling images in a post called, “Visualizing the world’s addiction to plastic bottles.”

Past 10 years — 4 trillion bottles: The plastic bottles sold worldwide since 2009 would tower above New York’s Manhattan Island. Data from Euromonitor International shows that more than 480 billion of these bottles were sold last year alone. The 2018 annual figure of almost 482 billion is up more than 50% since 2009. The pile visualized below is around 2.4 km high and dwarfs the glittering skyscrapers of the Financial District at the tip of Lower Manhattan.

Feeling a bit helpless on how to do your bit for the planet? (I repeat — every step makes a difference.)

One Green Planet lists 5 ways to recycle or repurpose your gadgets. My octogenarian maternal grandmother used a 60-year-old mixer, and it worked great. She received it as a wedding present. I have a perfectly good phone that my paternal grandparents used in the 1960s. Stuff just isn’t made like that anymore — so we have to change tack.