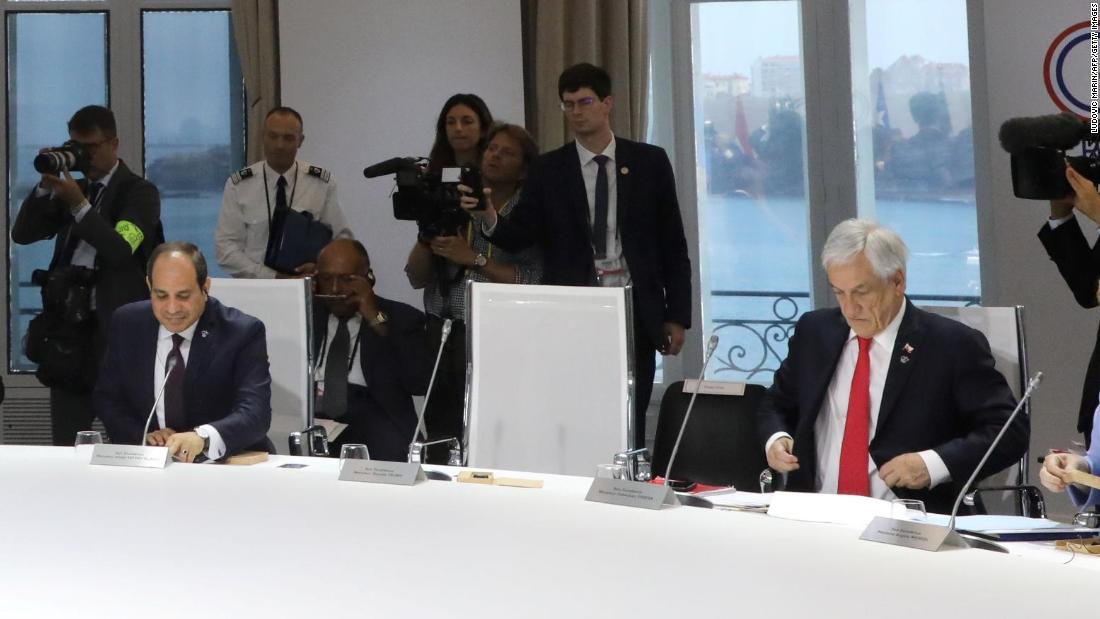 A friend’s young son said to her yesterday about the state of our environment: “There’s a hurricane coming to Florida and the rain forest is on fire. This is horrible!” It’s been one heckuva tough week for the Earth’s environment.

So let’s kick off the Climate Crisis Weekly with a quick look back at the G7 meeting in Saint-Jean-de-Luz, France. The crucial climate change, biodiversity, and oceans meeting was held on Monday, and world leaders discussed how to reduce carbon emissions and the Amazon rain forest fires, among other issues.

But not everyone attended the meeting. See that empty chair above, between the Egyptian and Chilean presidents? That’s Donald Trump’s chair. Trump said he couldn’t go because he had meetings scheduled with Angela Merkel and Narendra Modi, but the German and Indian leaders were both at the climate change meeting. (That’s Merkel’s hand on the far right.) Trump’s aides went to the meeting without him.

Trump described himself at the G7 as an “environmentalist” who cares about “clean air, clean water.” (In the Paris agreement naysayer’s latest move, he deregulated highly polluting methane emissions in the US on Thursday, but hey.)

CNN’s Chris Cillizza had a theory about Trump’s no-show:

He didn’t decide he wanted to meet with staff from the governments of India and Germany. He just didn’t want to go. He didn’t want to sit around and be, in his mind, lectured by foreign leaders about how he needs to think and feel about the issue.

U.N. Secretary-General Antonio Guterres expressed hope that the American people would do what its president won’t:

The G7 countries pledged $20 million to fight the Amazon rain forest fires at the climate change meeting. It’s not a huge sum, but they hoped it would bring more attention to the crisis. However, Brazilian president Jair Bolsonaro rejected the money over a bunfight with French president Emmanuel Macron (and he then hinted at a reversal). Bolsonaro announced a ban of fire to clear land for 60 days on Thursday.

And in a weird twist, Trump’s love of trade threats had a positive knock-on effect in EU discussions with Brazil, according to Time:

President Trump’s destruction of trade norms may have cleared the way for a powerful new weapon in the fight as countries increasingly crack down on rogue climate counterparts.

As tens of thousands of fires engulfed the Amazon, the European Union threatened to block a landmark trade deal with Brazil and ban imports of Brazilian beef if the country’s right-wing leader, Jair Bolsonaro, didn’t act. Within days of the threat, and as G7 leaders prepared to discuss the matter in France, Bolsonaro buckled, abandoning his passive approach to the crisis and sending more than 40,000 troops to fight the fires.

There was another interesting side effect of the horrific Amazon fires. Search engine Ecosia partners with Microsoft’s Bing and “donates 80% of the revenue it makes from search ads to planting trees.” According to Business Insider, Ecosia saw a 1,150% increase in downloads on August 22 in response to the Amazon fires. Ecosia’s daily download is around 20,000, and on that day, it was around 250,000. Ecosia works with tree planters in Brazil; they have their work cut out for them.

And finally, it’s not just the forest and the animals who are affected by the fires. The indigenous tribes are suffering, too. The tribes near the Xingu River (an Amazon tributary) released a message saying they will fight for the forest. (Learn more about the tribes here):

We are going to resist for our way of living, to produce without destroying, for the future of our children and grandchildren, for the planet.

Share this message everywhere- they are in the fight for their lives pic.twitter.com/5GflvzyjLZ

And finally, to see footage of the Amazon destruction’s aftermath, head over to our sister-site DroneDJ, who posted a Guardian video taken by a drone.

Nasa’s Fire Information for Resource Management System map (be warned, it looks shockingly red) shows nearly five times as many fires burning in central Africa than in South America. Deliberately set, controlled fires have been a part of agriculture in central Africa for millennia. But as the Independent explains, a “lack of traditional grasslands is driving increased slash-and-burn clearing of forests in parts of Africa, and therefore concerns are growing.”

CNN urges readers to exercise caution when it comes to being alarmed about the fires in Zambia, Angola, and the Democratic Republic of the Congo — they call it “comparing apples to oranges.” They point out that the controlled fires can increase soil quality, and that satellite data doesn’t give the cause or type of fire. But, as Macron said on Twitter in so many words, it’s definitely something to keep an eye on.

OK, back to drones. Climate activist group Heathrow Pause says they are going to fly toy drones to disrupt London Heathrow Airport from September 13. It’s “a step they hope will ground flights and put pressure on the government to take tougher steps to reduce carbon emissions,” Reuters reports.

The Heathrow Pause group said it would fly toy drones within a 5 km (3.1 mile) restricted zone around the airport but outside the flight paths of the airport, a step the group said would force the airport to ground flights.

“This is a symbolic action, using a legal loophole and participants’ self-sacrifice to draw attention to the most serious and urgent crisis humanity has ever faced,” the group said.

“The government’s inaction on climate change, and the looming catastrophe of airport expansion, gives us no choice and compels us to act.”

A Heathrow spokesperson replied: “We agree with the need to act on climate change. This is a global issue that requires constructive engagement and action. Committing criminal offenses and disrupting passengers is counterproductive.”

The Great Barrier Reef Marine Park Authority (GBRMPA) has downgraded Australia’s Great Barrier Reef’s outlook from “poor” to “very poor” in its latest report, according to the BBC. This is due to warming waters as a result of human-driven climate change. The GBRMPA produces the report every five years.

‘Despite that, with the right mix of local actions to improve the resilience of the system and global actions to tackle climate change in the strongest and fastest way possible, we can turn that around,’ he added.

Guess we loved bottlenose dolphins just a little too much.

New Zealand’s government has banned people from swimming with bottlenose dolphins in the North Island’s Bay of Islands region. “Human interaction was ‘having a significant impact on the population’s resting and feeding behavior,'” according to New Zealand’s Department of Conservation (DoC) [via the Guardian].

“Their numbers in the Bay of Islands have declined by 66% since 1990,” according to the DoC. There is also a 75% mortality rate among their calves, the highest in New Zealand, internationally, and in captivity.

Tourists can still swim with common or dusky dolphins in tours operated in the South Island.

Eylul Tekin, a research assistant for Clever, analyzed data from the Notre Dame Global Adaptation Initiative (ND-GAIN) to see which cities should be most worried about climate crisis.

Her findings? “The cities that are most vulnerable to climate disasters happen to also be the least prepared for managing those catastrophes,” according to an article in Mother Jones. Further:

The poorer the city, the higher its vulnerability to climate change, and the lower its preparedness for those impacts.

To see all of Tekin’s charts, visit the article.