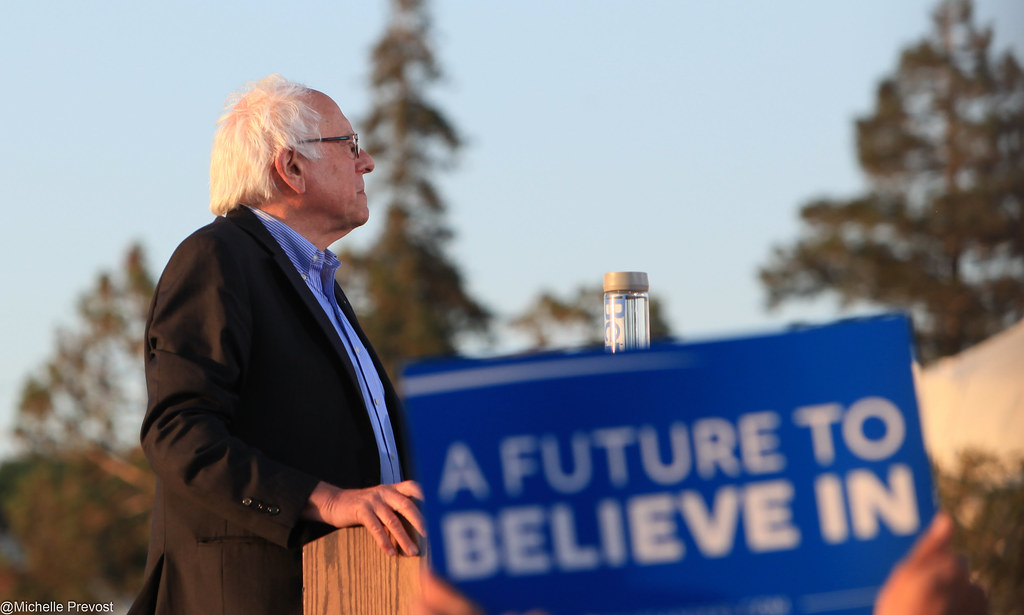 Sanders calls for decarbonizing transportation and power, the two largest sources of emissions in the US, by 2030, which would lower US emissions by 71%. (That’s just over a decade away, by the way.)

So, where does the money come from? Federal dollars. Vox explains:

The plan generates money from various sources, including $6.4 trillion in revenue from selling energy via power marketing authorities, $2.3 trillion from income taxes from the new jobs created under the plan, and $1.2 trillion from reducing military expenses related to protecting oil shipping routes.

The campaign is proposing covering the costs over 15 years by a patchwork of measures that includes eliminating existing fossil fuel subsidies and taxes on that industry; income tax revenue on the 20 million jobs created by his plan; and an estimated $1.3 trillion saved through a reduced need for safety net programs because of the creation of those jobs.

So what’s the plan, then? It includes, but is not limited to:

Could it work? The only way it could if it’s seen as tangible and achievable by your average US citizen. Or, as Vox‘s David Roberts says:

You develop a vision of politics that puts ordinary people at the center and gives them a tangible stake in the country’s future, a share in its enormous wealth, and a role to play in its greater purpose. Then organize people around that vision and demand it from elected representatives.

If you want bipartisanship, get it because politicians in purple districts and states are scared to cross you, not because you led them to the sweet light of reason.

Sanders’ proposal is big and bold. There will be a lot of skepticism from both sides of the aisle. But in order to tackle the climate change crisis, the US needs to unite and embrace green energy fully and quickly. Or as Sanders himself put it, “The cost of doing nothing is far more expensive.”

Apple continues its expansion of the use of solar energy. It’s developing rooftop solar arrays for the Wan Ja Shan Brewery Co. in Taiwan, which is best known for its soy sauce, according to Bloomberg.

(And by the way, there are some great recipes on Wan Ja Shan’s page, which you can enjoy while knowing they’re doing the right thing with green energy.)

In April 2018, Apple said all of its facilities were powered with 100% clean energy. Says Bloomberg:

It said this year that 44 suppliers have committed to making Apple products on 100% clean energy, including Taiwan Semiconductor Manufacturing Co., Apple’s main chip-making partner and the island’s biggest company by market capitalization.

Wind farms are great for moving away from fossil fuels and producing sustainable energy. But not everyone is happy about wind turbines. Many nature advocacy groups are worried that the whirling blades are going to harm wildlife, particularly birds and bats. Or, as Deutsche Welle succinctly puts it, “renewables can … be highly contentious — even among the eco-minded.”

Cats still lead the pack among bird killers (hey, it’s their natural instinct), followed by birds flying into buildings and vehicles, but wind farms do throw up some contentious issues:

Wind turbines are often cited as being particularly bad for birds and bats. Birds of prey, for instance, have a blind spot in front of them, and look down as they search for food. Collision with unseen giant blades can easily prove fatal. The towering structures can also force birds to deviate from their regular routes between breeding and feeding areas, meaning they have to travel longer distances which can ultimately leave them with less energy to raise young.

So how can we harness the wind and also protect wildlife? Strike a balance, says Deutsche Welle:

In most cases, adequate siting and technological improvements can avoid wind turbines conflicting with biodiversity, experts agree. Selective shutdown of turbines in sensitive areas for migratory birds, for instance, can be very effective.

You’d think that the hotter and sunnier the day, the better solar panels would work, right? Wrong! (Mind blown.) BBC Science Focus Magazine explains the science of why this goes against what originally seemed obvious:

Solar panels work by using incoming photons to excite electrons in a semiconductor to a higher energy level. But the hotter the panel is, the greater the number of electrons that are already in the excited state. This reduces the voltage that the panel can generate and lowers its efficiency.

Higher temperatures also increase the electrical resistance of the circuits that convert the photovoltaic charge into AC electricity. Modern hybrid solar panels are designed to suffer less from the heat, but they can still lose 10% of their rated efficiency on hot days.

Yet another reason to slow that global warming, eh?