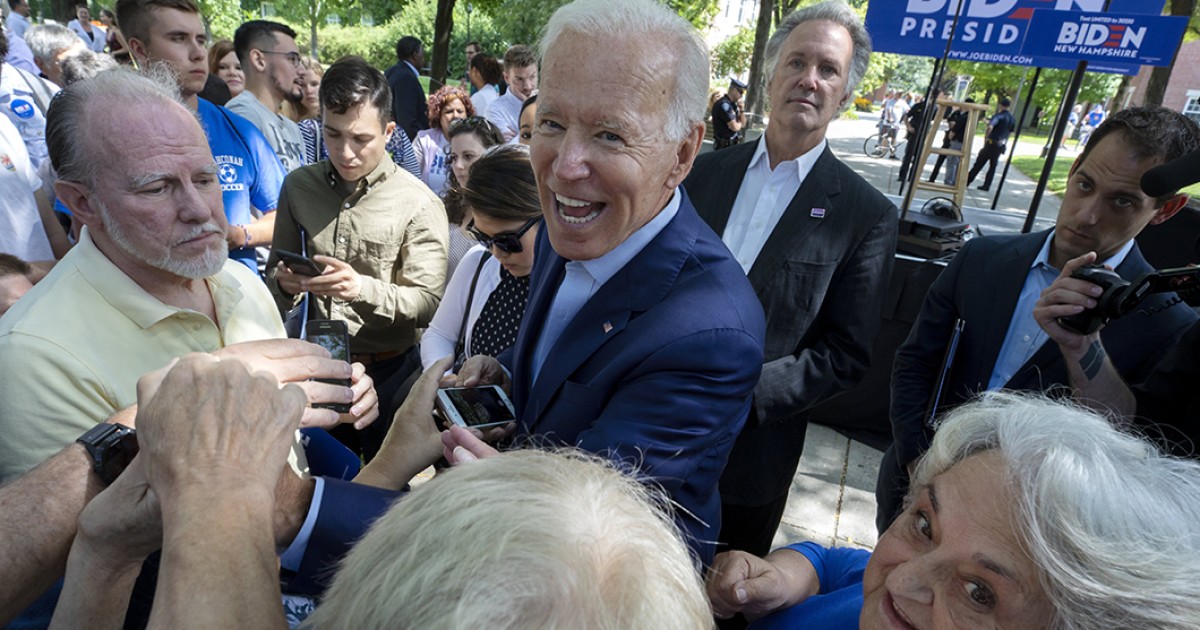 At Keene State College, a woman asked Biden about his climate plan. In a video on C-Span (below), a woman asks:

What about $25-an-hour minimum wage for renewable energy workers to move them out of fossil fuels?

Sure, that’s what we’re doing! Come on! Take a look at the fossil fuel plan we put together!

Biden released his climate plan in June. The plan did not mention a specific minimum wage increase for green energy workers, but states: “We must ensure jobs created as part of the clean energy revolution offer good wages, benefits, and worker protections.”

Now we move on to another Democratic presidential candidate’s plan for implementing green energy to combat climate change.

Andrew Yang says he’d spend $4.87 trillion over 20 years, which isn’t nearly as aggressive as Bernie Sanders’ $16.3 trillion over 15 years, but he’s not messing around — and he’s certainly embracing green energy. (The moving to higher ground thing is downright depressing.)

Yang wants a “zero-emissions requirement for all cars by 2030, a 100% renewable electric grid by 2035 (it’s not clear if he considers nuclear a ‘renewable’), net-zero emissions from transportation by 2040, and net-zero emissions overall by 2049,” according to Vox. He’d also set a carbon tax of $40 per ton, which would rise to $100 per ton.

The numbers are in from the US Energy Information Administration (EIA) on use of renewables in the United States. According to Renewables Now, “Renewable energy sources (i.e., biomass, geothermal, hydropower, solar, wind) accounted for 20.11%, or a fifth, of net domestic electrical generation during the first half of 2019.”

Baby steps, but we’re going in the right direction.

If you’ve ever taken the Tube in London in the summertime, you’ll know how stiflingly hot it gets down there. So it makes perfect sense to put that “waste heat” to good use by piping it to warm homes. As the Guardian explains:

The sweltering temperatures on the Tube’s Northern line will soon begin keeping homes in Islington, north London, cozy through the colder months, under a scheme to harness the heat from the Underground.

The Islington heat network already keeps about 700 homes warm by channeling heat created in the Bunhill Energy Centre, which generates electricity, into local council housing, schools, and a leisure center.

The next phase of the project, which is due to be completed in the coming months, will extend the network to a further 450 homes.

This is a great way to use cheap, low-carbon heat from the Underground. “The Greater London Authority (GLA) estimates there is enough heat wasted in London to meet 38% of the city’s heating demands.”