The Amazon rain forest produces 20% of the world’s oxygen. It’s kind of important to everyone, to state the obvious.

But in the last half-century, one-fifth of the Amazon has been deforested. And on top of that, Brazil’s National Institute for Space Research, which is responsible for monitoring wildfires and deforestation, has reported 74,155 fires as of August 20 — an 84% increase over the same period last year.

So why is this happening? New York magazine explains the causes, but it can be summarized in a single word: humans.

Environmentalists blame the fires on increased logging and the loosening of regulations by Jair Bolsonaro, Brazil’s right-wing president who has been known to call himself “Captain Chainsaw.” One researcher has estimated that 99% of the fires are the result of human activity, led by the actions of ranchers who set fires to illegally clear land for raising cattle. Bolsonaro has been accused of encouraging loggers and farmers to seize control of the Amazon, and the $23 million cut from the budget of Brazil’s environmental enforcement agency is said to have emboldened the activity.

Smoke has covered nearly half of Brazil and is reaching Peru, Uruguay, and Bolivia. Bolsonaro has said the fires are normal, and also accused NGOs of setting the fires to make him look bad. (Yes, that is a contradiction.)

And United Nations Secretary-General António Guterres tweeted on Thursday that this isn’t just about Brazil; this is about all of us. Bring on the international pressure.

I’m deeply concerned by the fires in the Amazon rainforest. In the midst of the global climate crisis, we cannot afford more damage to a major source of oxygen and biodiversity.

The Amazon must be protected. 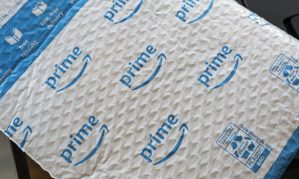 If you live in the US, you know those plastic envelopes you sometimes receive from Amazon, when you’re not getting a huge cardboard box with a really small item inside? They aren’t recyclable in curbside bins in the US. And in the UK, where they’ve just been introduced, they’re not recyclable at all.

Mike Childs, the head of policy at Friends of the Earth, said [via the Guardian]:

Despite the huge public outcry, it’s astonishing how many companies are still using single-trip, unrecyclable plastic for deliveries. If we want to stem the tide of plastic pollution blighting our environment, giant firms like Amazon have to find ways of making deliveries in returnable and reusable packaging. And if they won’t — the [UK] government should make them.

And yet Amazon was one of 181 companies that signed a new US corporate purpose on Monday. The revised statement disposed of the objective of making as much money for shareholders as possible and vows to also consider other stakeholders, too, like employees and the community. And customers.

Amazon is a global company that ships between 4 billion and 5 billion packages a year globally. Let’s see if it takes heed of Britain’s disgruntlement with the plastic envelopes. Because the UK isn’t messing around with plastic reduction: “The number of single-use plastic bags sold in the main supermarket chains has fallen by more than 90% since the introduction of the 5p charge in October 2015.”

There is a general assumption that the Great Pacific Garbage Patch is one gargantuan blob of ocean debris.

60 Minutes debunked this in a report this week on plastics in the ocean. Associate producer David Levine reported from the Midway Atoll:

It’s a giant soup… The plastics spread out. It’s under the surface. It’s not an easy thing to mop up.

If it were a garbage island, I think it probably would be much easier to clean up.

Watch the 60 Minutes clip here, where they explain why the disbursed plastic is actually a bigger challenge than a giant mass would be.

What the heck is a nurdle? According to Quartz, the biggest pollution disaster you’ve never heard of.

Royal Dutch Shell is building a plant north of Pittsburgh to manufacture 1.8 million tons (1.6 million metric tons) of virgin plastic each year. That plastic will be created as tiny plastic pellets known as nurdles. Writes Zoë Schlanger of Quartz: 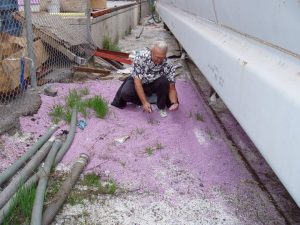 They are a massive source of plastic pollution, escaping into the environment before they have a chance to be molded into a useful shape. With roughly 22,000 nurdles per pound of plastic, the Shell plant intends to produce the rough equivalent of 80 trillion nurdles per year.

Only one US state — California — regulates plastic pollution, and there are no federal rules about pellets. The industry currently regulates itself (and that seems to be going swimmingly). It looks like the US needs to up their game on regulating the production of nurdles. Read the whole Quartz article here.

Photo: Pre-production plastic pellets strewn on the ground near a facility in California. Quartz

Here’s some good news: Peru has committed to ending palm-oil deforestation by 2021. The National Wildlife Federation called it a “momentous win.” They follow Colombia as the second South American country to make this decision.

Around 66 million tons (and growing) of palm oil is harvested every year. It’s used in half of all supermarket products.

“This commitment is a momentous development for the people of Peru and the global effort to confront climate change. It underscores that we can feed the world without hurting biodiversity or clear-cutting tropical forests,” Kiryssa Kasprzyk, who led the National Wildlife Federation’s work, said in a statement.

NASA scientist Ian McCubbin was among those aboard the research plane in Greenland. He said the Greenland ice sheet was disappearing “right before our very eyes. This is having impact all around the planet. We all share one ocean, so a billion tons of ice lost here raises sea level[s] all across the world by a measurable amount. This is happening today, and the question is, How fast this is going to happen in the future?”

Let’s end this weekly round-up on a positive note, shall we? The Florida Aquarium in Tampa “says they’ve made scientific history as a group of coral has successfully reproduced two days in a row for the first time in a lab setting,” according to CNN.

This provides hope for what’s known as America’s Great Barrier Reef, which is found off the Florida Keys and is the third-largest coral reef in the world. Warming oceans have been severely detrimental for coral populations.

As a Floridian who grew up diving in the crystal blue waters of the Keys, the thought of seeing live, vibrant coral make a return — along with all the underwater creatures that depend on that coral to survive — warms my heart.