I’m just waking up after last night’s Tesla Semi and next gen Roadster Event and it feels like a dream in a lot of ways.  If you would have told me yesterday that there would be an EV that met any of the following specs, I would have said “Vaporware!” Keep in mind these are base specs (!!) and the Founder’s Series car, which will take advantage of technologies gained in the 3 years before production, will somehow be better than:

It’s over. It’s. Just. Over.  I’ve said it before but there is no way to dispute it anymore. Electric vehicle engines are superior to internal combustion. Full stop.

You can still talk about style, suspension, handling, interior, features, financing or anything else on a car but as far as engine power, there is no longer any comparison. Electric has won.

If the Model 3 launch was D-Day for electric vehicles, I think the new Roadster is victory day. Let’s get into the numbers here.

How did Tesla make such a leap to around double its high-end model range? This car is a huge step up in a lot of ways but isn’t impossible given what we know about EVs and Tesla’s trajectory.

When I got in the vehicle for a test ride, the first thing I noticed was that you are sitting pretty flat like the original Roadster but significantly higher up off the ground. If I had to guess, I would imagine that Tesla has stacked two layers of 2070 cells between the axles.  That’s 2x 100kWh battery packs like the Model S and X but between what appear to be a smaller footprint. Also we weren’t given a look at any sort of frunk, but with the tight space up front and 2+2 config, it is unlikely that Tesla is storing batteries in the front or back of the car.

Once you consider the 200kWh however, the 620 mile range is absolutely doable. In fact, per kWh, the 7 seat Model S 100D gets better range at 330 miles vs. the new smaller Roadster at 310/100kWh. With the better aerodynamics, I attribute the discrepancy to the huge amount of weight in that 200kWh battery pack and three burley electric engines.

I’ve already talked about how violent the P100D Ludicrous acceleration feels but “Plaid” feels like being inside a baseball being thrown by Aroldis Chapman. I imagine it is a similar feeling to being rear ended by a bullet train. I was legit dizzy after the ride that had few turns.

These are all dragster type speeds and not what you expect to see on street legal vehicles driven by civilians, let alone a relatively inexpensive $200,000 vehicle. Slower Bugattis cost more than 10x as much.

(funny anecdote: The nicest thing that happened to Bugatti at the event last night was its aerodynamics being compared unfavorably with Tesla’s Semi! I can only imagine the supercar maker boardroom conversations this morning)

Tesla says it put three engines in the vehicle, one each for the rear wheels and another for the front wheels. I imagine these engines turn out around 500 horsepower per engine for a total of 1,500hp total. We’re talking significantly over a megawatt of power. The rear wheels on this thing are fat and the front wheels are even larger than the back wheels on the original Roadster for comparison (325mm rear/295mm front on new Roadster, compared to 225 rear/175mm front on the original).  Those larger tires are necessary to get the traction required for sub-2 seconds 0-60.

Those two rear engines also each drive the wheels independently which are going to torque vector adding some stability to those 1.9 second launches.

Using today’s technology, imagine a 750 horsepower P100D battery/drivetrain and add another P100D drivetrain but in a smaller overall package than a single P100D. Easy, right? I’m going to go ahead and assume that Tesla is going to be announcing some efficiency/weight gains in its battery tech in the next 3 years.

And that 250+ top speed? I don’t know how Tesla gets here (vs 150mph top speed in current vehicles) simply by “ratio-ing” alone. I think there might be a “top gear” transmission in this vehicle which, among other things may be a blow to Rimac and the other electric supercar makers.

Gorgeous. All of this technology is packed tight into this beautiful vehicle that screams supercar, but at the same time is faithful to the original Tesla/Lotus Roadster design and relates to Tesla’s current lineup – thus being a “halo car”. 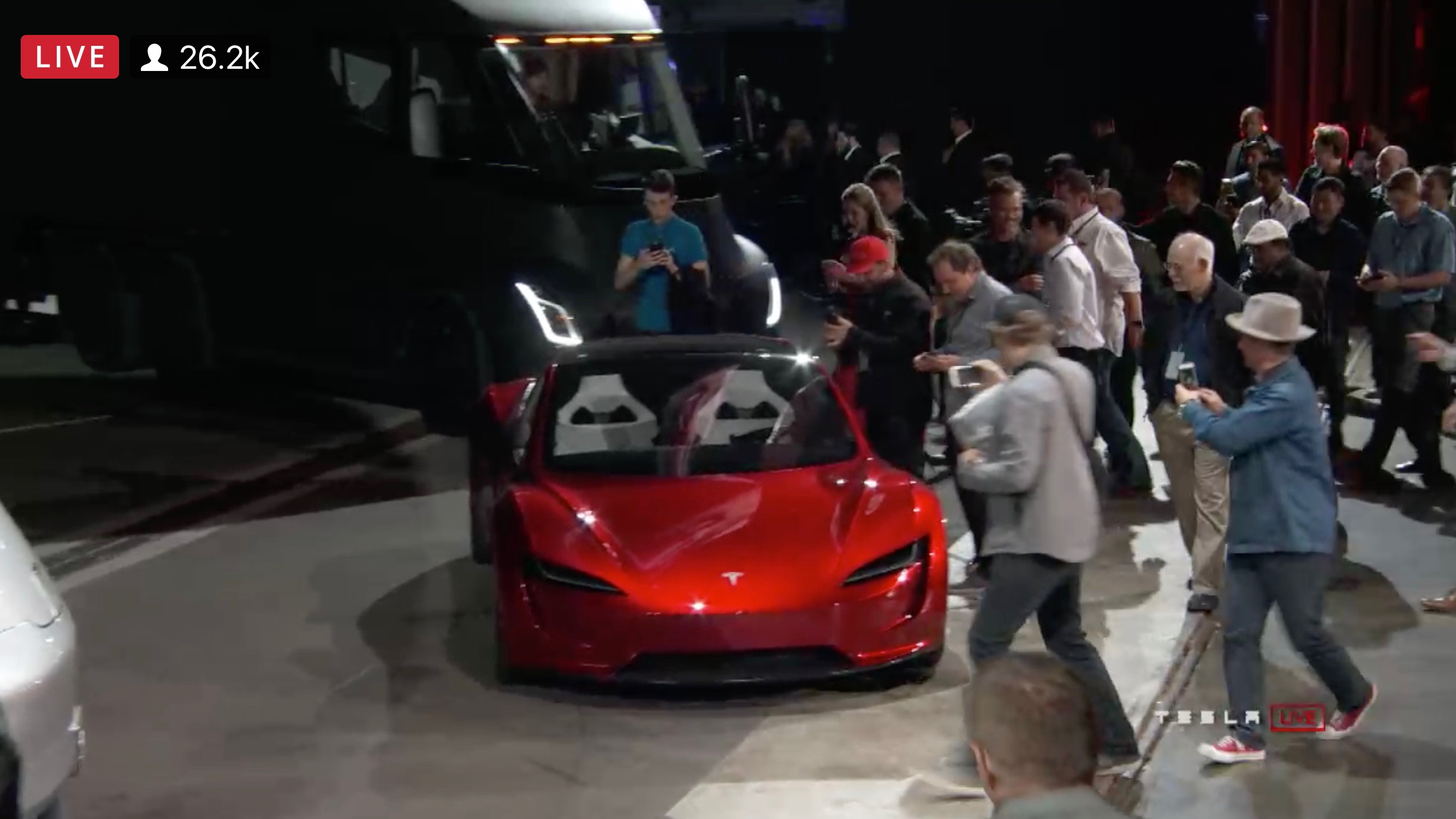 Absolutely no one in the supercar market is going to have issues with the appearance of this vehicle. This nutty concept doesn’t even do the real thing justice.

The new Roadster somehow seats 4 and has a trunk that can store its ~2’x5′ targa glass top so while it is a supercar, you could theoretically take the tightly packed family to Florida in it, stopping only every 600 miles (or 10 hours) for a charge. Kids, go to the bathroom now!

You can see from the videos above that the center console is a thin, OLED type of display with dark blacks and a totally new type of interface. Tesla kept the interior of the car pretty sparse dark and my time was quick so I think there are a lot more interior discoveries left to come.

While I wouldn’t expect Falcon wing doors in a targa sportscar, the Roadster doors seemed pretty normal. As I mentioned above, getting in and out is similar to the old Roadster, but imagine it is lifted 6-8 inches higher which is certainly easier, but not a daily driver for folks with bad backs.

Tesla’s “Halo Car” isn’t just going to rebrand the company as the ultimate high-end vehicle maker. It should also bring with it high performance electric vehicles from other automakers, should they decide to bring them to market.

Oh and please help me get one of these please. Use my referral code to buy a Model S/X with free supercharging (or get yourself some nice solar roofing) 😀 before December 31st.