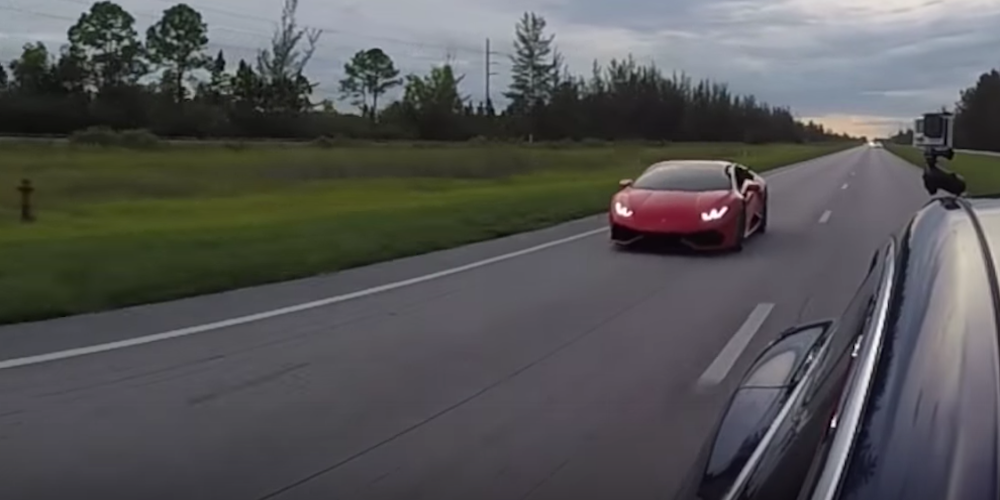 When you send a vehicle which can hold 7 passengers comfortably with their luggage along the road from 0-60mph in 2.5 seconds, you are turning the supercar world upside down. When you do it in an EV, you know the world has changed.

DragTimes raced a Lamborghini Huracan, a $200,000 2-seat supercar that is basically a combustion engine on wheels, along a stretch of Florida roadway this weekend. When the Tesla Model S P100D and the Huracan both took off at the same time, the production Tesla quietly jumped out in front of the exotic supercar which was belching hydrocarbons as fast as it could. It stayed there well beyond 60mph and 100mph…

While the Lambo finally caught up and passed the Tesla after exhausting 10 seconds, 6 gears and over 100mph of speed, clearly the realistic race in all but the fringe of edge cases was won by the Model S.

And remember this thing has the passenger room of a minivan.

At the release of the P100D Tesla CEO Elon Musk said, “For the first time, the fastest accelerating production car in the world is an electric car. I think this sends a great message to the public about the future of transportation.”

The future of supercars is electric as well. The Porsche 918 Spyder and LaFerrari are both Hybrids. The last ‘mainstream’ production supercar which will be 100% ICE will likely be the Bugatti Chiron which is expected to be a slightly faster 2.4sec 0-60. That’s if Tesla can’t squeeze out some more speed between now and the Chiron’s launch.