Is the Tesla Model 3 launch today the D-Day for electric cars? I think so

It is hard to overstate the significance of today’s Tesla Model 3 launch at the Fremont California factory. It very well could be the beachhead that electric cars need to tip the scales over gasoline cars in the US and the world.

Will we be witnessing history tonight? Let’s put it into perspective…

Tesla has over 400,000 reservations for the vehicle which haven’t been road tested by the public as of this writing, haven’t been in showrooms and really hasn’t been even seen in person by all but a few lucky folks. Keep in mind that at the beginning of this year there was only just over half a million EVs on US roads and just slightly more in all of Europe or China.

Tonight’s event will be the beginning of an order of magnitude change. If you want to compare Tesla to Apple, this is making a great electric car available to many more people akin to lowering the price of an iPhone from $600 to $200 (a drop by two thirds) and making it available to a much broader swath of the world. 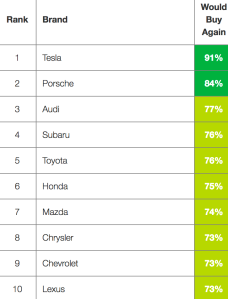 Do people love their Teslas like Apple folks love their iPhones? Let’s have a look at Consumer Reports numbers (right) of Tesla people who would buy another vehicle from the company.  Tesla is a whopping 15 percentage points above the field and the only maker that is even in the same ballpark is Porsche at a significant 7 points behind.

If the Model 3 is as great as us early believers think it will be, the car will fundamentally change how we move around. Gas stations, oil changing locations, transmission shops will start to disappear and be replaced by huge charging stations between major metropolitan areas. Oil infrastructure including tanker boats and trucks will disappear. Cities will become quieter. Air will become cleaner.

In their place, people will put solar on their rooftop to make free energy. The grid will need to be reinforced but it will grow stronger and more resilient.

The multi-trillion dollar fossil fuel industry will try to buy delays from the government and sway the public with misinformation but at the end of the day, the math simply doesn’t work out. Even if you don’t believe the science of climate change, EVs are better, faster, more fun cars and they move people around more cheaply than gasoline powered vehicles.

But that’s just the beginning

We’re at the early days of ridesharing and the technology is already changing the urban and suburban landscape.  Now add in full autonomy and it is hard to even fathom what our world will look like in just a decade

Each Model 3 is equipped with hardware to become self-driving with future software updates, accroding to the automaker. Tesla has stated, in Master Plan v2, that its cars would turn into Ubers, should the owners desire, and taxi people around while they work or sleep, and theoretically be able to pay for themselves. The cars will also be able to charge themselves when not being used for human transport. Regular maintenance? Your Tesla might make a trip to a service station every few months to get its tires rotated. Heck, your car might arrive from Tesla into your driveway on its own one day.

In another comparison to Apple, Tesla is delivering the whole ecosystem, not just a car. It has been hard at work over the past 5 years on a free/inexpensive global network of fast charging stations that will one day rival and potentially surpass the energy transfer speed of gas stations. It has already delivered enough energy to enable Tesla’s fleet to travel over 1 billion miles.

One thing to remember here is that EVs can go years without visiting a charging station outside the home because they start out every morning with a full “tank”.  Most people don’t drive 200-300 miles/day let alone in a week. Charging stations are for the minority of people on trips or who can’t charge at home overnight.

Tesla also integrated SolarCity into its operations which allows homeowners to power their cars off the sun through solar panels on their roofs or back yards. As someone who has smugly been doing this for 2 years, I can tell you there is no greater feeling than knowing that you are harvesting energy from the great nuclear reactor in the sky to power your magical space car.

Tesla’s Model 3, even with a full ecosystem, impressive specs, full autonomy hardware somehow has a starting price $2,500 less than the Chevy Bolt EV. In California, Oregon and a few other states, this very sporty and speedy sedan will have a base price of $25,000 after $7500 Federal tax credit and $2500 state credit. New Yorkers like myself will get a $2000 state incentive. Keep in mind all of the maintenance savings down the road and the fact that even with cheap shale gas, electricity is usually about around half the price per mile.

Is this the tipping point?

It certainly feels like today is a milestone in the history of automobiles. If Tesla can entice people to buy its cars the way Apple got people to buy its phones, we’re looking at a major disruption for the ages. All of the pieces are in place:

Tesla’s motto has been to accelerate the advent of sustainable transport and now energy. Today, they are moving the slider to ludicrous mode.

We’ve got an extra ticket for tonight’s Model 3 event for an Electrek reader in the area. Tweet at us why we should take you.