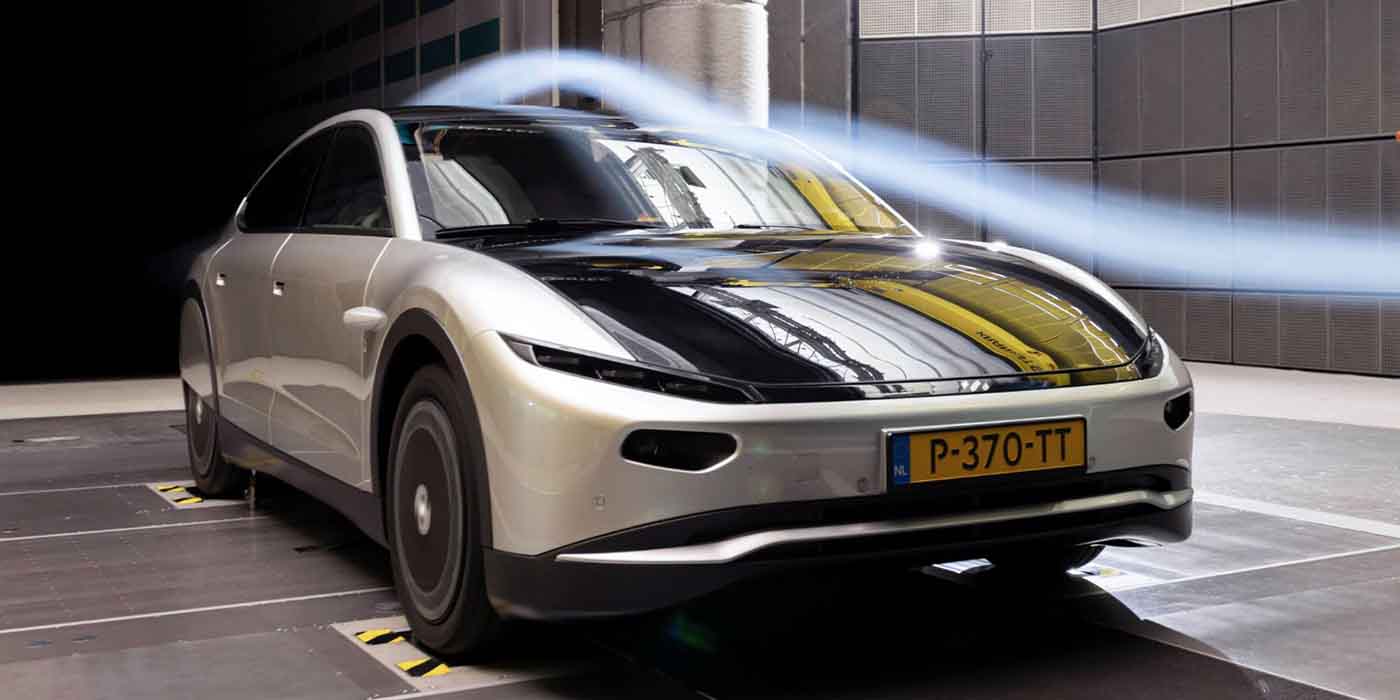 As it sits mere months away from bringing its first solar EV to market, Lightyear is once again showcasing the potential of its Lightyear 0. Following a series of drag-coefficient tests in Germany under WLTP conditions, the Lightyear 0 SEV should hit the market as the most aerodynamic production car ever built. Its test numbers shatter a title held by GM’s EV1 dating back to the late ’90s.

Lightyear is a Dutch solar EV that has grown alongside Electrek over the years, and we’ve been able to track its progress toward bringing the first solar electric passenger car to market. That feat should be accomplished before year’s end, as Lightyear gears up for a limited production run of its flagship SEV, the Lightyear 0.

Up to this point, the Lightyear team has done an excellent job at keeping the public abreast of its progress in developing the Lightyear 0. This showcase has included prototype range testing in the summer of 2021, followed by durability testing and news of partnerships with companies like Sibros.

In January, Lightyear gathered more test data at Bridgestone’s European Proving Ground (EUPG) in Aprilia, Italy, which elicited conversations about it arriving as one of the most efficient passenger vehicles in the world.

We learned more details of the startup’s obsession with efficiency this past June, when we had the opportunity to test drive a near-production-ready version of the 0. At the time, the startup was claiming the 0 had a drag coefficient rated below 0.19. We pointed out that this Cd rating would make the 0 the most aerodynamic production car in the world, with the caveat that the SEV had not faced any official testing yet.

Now however, the Lightyear 0 has completed a series of comprehensive tests in Europe and delivered a drag coefficient well below 0.19, substantiating its status as the most aerodynamic production car ever made.

Lightyear 0 is the world’s most aerodynamic car – for now

The Dutch startup shared its SEV’s latest record breaking accomplishment in a press release out of the Netherlands this evening (Thursday AM overseas). According to Lightyear, the 0’s latest drag coefficient is 0.175, significantly lower than originally promised – and lower than any Cd ever delivered by anyone else.

Lightyear explained that this number has been confirmed through a series of tests conducted in one of the FKFS wind tunnels in Stuttgart, Germany, under Worldwide Harmonized Light Vehicle Test Procedure (WLTP) conditions. Lightyear’s chief technology officer Arjo van der Ham spoke to the company’s latest accomplishment:

We are extremely proud of this incredible achievement. We had to start from a blank sheet of paper when we started developing our technology and – with a lot of dedication and hard work – we continue to push the boundaries with every milestone like this.

While the startup is celebrating this record, it has reiterated that the main focus of these tests is to deliver an optimal solar EV to its customers. Still, when those 946 planned units of the Lightyear 0 do arrive, its creators will be able to advertise “most aerodynamic” next to “world’s first solar electric car.”

With the achievement, Lightyear has usurped GM’s EV1 as the most aerodynamic production car (0.19 Cd). The EV1 was ahead of its time when it debuted in 1996, but it didn’t live to see the new millennium, and we’re still salty about it. Now, over 20 years later, electric vehicles have reached critical mass adoption in the United States, and Lightyear looks to blaze the same trails as the EV1 by leading a sub-revolution of solar EVs.

Although Lightyear is sure to carry the aerodynamics crown into start of production, there’s a possibility its reign could be short lived. Fellow startup Aptera is gearing up to start production of its own solar EV and has a genuine chance to overtake Lightyear.

All that said, the Aptera remains in gamma phase before it begins building production-intent delta prototypes later this year. Until Aptera brings its flagship SEV to production with certified test results, Lightyear remains the most aerodynamic car in the business.

Mercedes-Benz has also already achieved a drag coefficient of 0.17 on its EQXX solar EV concept, but it’s not a production vehicle. Still, its EQS sedan has a Cd of 0.20 and holds its own as one of the most aerodynamic vehicles on the global market today. The EQXX will likely never see an assembly line, but it offers proof of concept for more efficient EVs to come in the future.

These sort of achievements are truly beneficial for EVs as we all look to maximize our range in order to travel as far as possible, easily and sustainability. This sort of friendly competition is exciting to follow and should be celebrated because no matter which automaker holds the record, we as consumers will be sure to benefit.

Check out the testing footage from Lightyear below: