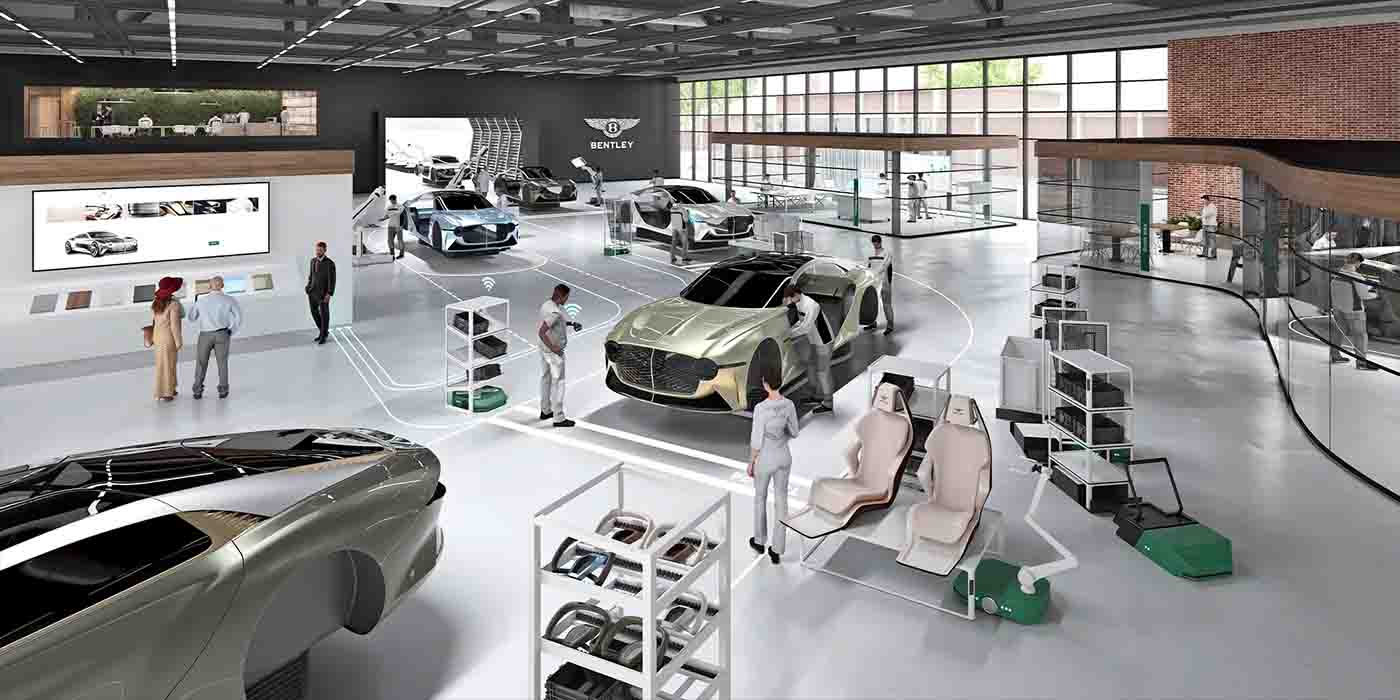 In a recent interview out of Europe, Bentley CEO Adrian Hallmark promised some bold specs from the luxury automaker’s first battery electric vehicle. Despite describing the “brutality of acceleration” in the upcoming EV, the Bentley chief said that won’t be its main selling point. It will instead be the “effortless overtaking” from torque on demand. That price though…

Bentley Motors Ltd. is a century-old automotive brand celebrated globally for its expertise in quality and luxury. Volkswagen Group purchased the marque in the late 90s, modernizing its facilities to increase production.

Contrary to VW Group, which has made conscious efforts in recent years to embrace electrification, Bentley has not been a huge part of the all-electric transition overseas despite a promise to go all-EV within the next ten years.

Bentley currently only offers PHEVs including the the Bentayga, which will be joined by the Flying Spur this year. To kick off 2022, Bentley announced its “Beyond100” electrification strategy, vowing again to go all-electric by 2030 with the help of five new BEVs – one arriving each year beginning in 2025.

The strategy also includes a £2.5 billion (~$3.4 billion) investment in Bentley’s Crewe manufacturing facility, revamping the entire space to support a “Dream Factory” for EV production. As we await the first Bentley EV in 2025, the company’s CEO shared some specs we can expect to see… maybe.

Despite not having delivered a single 100% electric vehicle, Bentley is planning to burn right through the specs page of the industry, according to its CEO. In a recent interview with Automotive News Europe, Adrian Hallmark teased some of the specs and pricing consumers can expect to see with Bentley’s first EV.

According to Hallmark, the Bentley EV planned for 2025 will be able to deliver up to 1,400 horsepower and accelerate from 0-60 mph (0-97 km/h) in just 1.5 seconds. If true, this new Bentley would destroy both the Tesla Model S Plaid (1,020 HP) and Lucid Air Dream Edition Performance (1,111 HP) in a race – two of the fastest passenger EVs currently on the road, clocking 0-60 mph in under two seconds.

While those specs alone could be a huge selling point for EV enthusiasts with deep pockets (more on that in a bit), Hallmark said this unprecedented speed is not the new Bentley’s main selling point. He said it will instead be the vehicle’s effortless overtaking thanks to instant torque:

Pure nauseating speed. Sign us up. Even doubling Bentley’s current GT horsepower gets 1,300 HP by out math, not 1,400. Still, that’s a lot of go. Don’t worry, for those future Bentley EV drivers with more sensitive stomachs, Hallmark explains that the brutal acceleration will be at the customer’s discretion – a much more tranquil 0-60 mph in 2.7 seconds… or it can be switched to 1.5 seconds.

Hallmark did not share any additional specs on the upcoming Bentley EV, but did say its design would build off the automaker’s current lineup of the Continental GT coupe, Flying Spur sedan, and Bentayga SUV. Hallmark said all three models will be transitioned into BEV versions when Bentley goes all-electric, also stating “what we will not do is try and make them look like electric cars.”

The new BEV will be built on the premium platform electric (PPE) developed by Porsche and Audi – sibling divisions within VW Group. The PPE will immediately offer Bentley the battery technology, drive units, and body systems along with autonomous and connected car capabilities.

While we don’t have any official pricing for the 2025 Bentley EV, its CEO did share that at least one variation will cost over 250,000 euros (~$262,000). For that kind of money, this EV definitely better go 0-60 mph in 1.5 seconds while simultaneously offering hot stone massages.

What’s interesting however, is that Hallmark relayed that the high price point is not due to the cost of EV batteries, which is usually the case. He elaborated:

So why so expensive then? We’ve asked Bentley for clarification and have yet to hear back.

Tremendous acceleration on paper with an even larger price tag.

Can Bentley deliver an EV on its first try that can outrace a Plaid and Dream Edition P? How fast will either of those competitors be in 2025 when the new Bentley EV is supposed to arrive?

The Plaid already has three motors, but Lucid will almost certainly have a tri-motor version of the Air by then. Sign me up for the track day including all three of these EVs for sure.

Three years out, all I can say is I will believe it when I see it, and I certainly hope I do. Bentley appears on track with the revamp of its Dream Factory at Crewe and should be able to transition a little easier into electrification given the smaller output and higher price of its vehicles.

Hallmark’s promises are bold and exciting, but his comparison of batteries to 12-cylinder engine prices makes me think they’re behind on their own in-house EV innovation. Luckily, Porsche and Audi could very well save the day by providing the PPE, a powerful “EV starter set” for Bentley to build upon.

Makes you wonder, though, if Bentley is anticipating this sort of EV performance by 2025, you’d think sportier vehicles from Porsche and Audi would deliver the same numbers, if not better… and sooner! Plus, those two VW group subsidiaries seem to have zero issues designing aerodynamic vehicles that look like EVs, unlike Hallmark who wants to do the opposite. It will be interesting to see the first images of Bentley’s first EV.