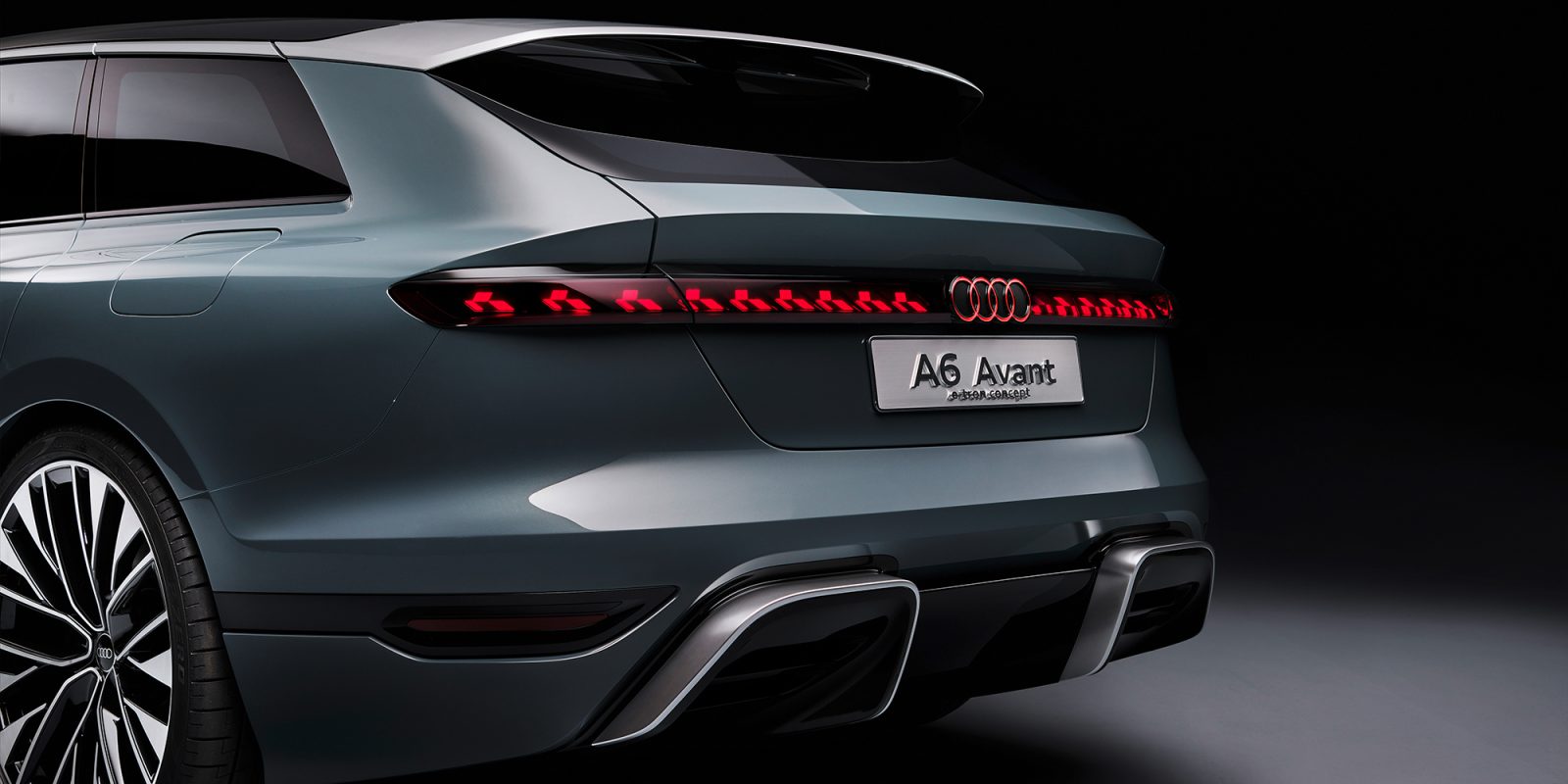 Another year, another Audi A6 e-tron concept. During its 2022 Annual Media Conference, the German automaker pulled the sheet off its second A6 e-tron concept – a luxury class station wagon called the Avant. Picking up when the A6 e-tron Sportback concept left off, the Avant offers a glimpse into Audi’s all-electric future with some sleek new features that optimize space and aerodynamics.

Audi AG is a German automaker founded over 100 years ago and although it is known for its combustion offerings in the luxury and performance segment, the company has begun to shift its vehicle lineup toward electrification. This move aligns with its parent company, Volkswagen Group.

Last summer, Audi announced its electrification strategy, which includes an end date of 2033 for all new ICE models. They will be replaced with Audi’s e-tron lineup of battery electric vehicles – which first debuted in 2018 – with an EV of the same nomenclature.

During last year’s Shanghai Auto Show, Audi showcased its future of EV innovation with an A6 e-tron Sportback concept on the aforementioned PPE. During a media conference today, Audi revealed that it has built upon last year’s A6 e-tron concept with the Avant.

It’s a spacious, luxury station wagon that gives a nod to the German automaker’s past, while equipped with lots of new technology that will be present in future e-tron models.

Audi A6 Avant e-tron concept: A Sportback with a big caboose

Audi unveiled its second A6 e-tron concept during a Media Day Presentation in Germany today. Called the Avant, the new concept was designed with reverence of its station wagon model that first debuted in 1977 (known as the Audi 100 prior to 1994). The name is derived from “avant garde” and alludes to a 1995 Audi ad slogan, that proclaimed, “Beautiful station wagons are called Avant.”

When most people think station wagons, “beautiful” isn’t the first word that usually comes to mind. I personally think of sitting in the third row seats, looking out the rear window, and waving to other cars as a child.

That being said, this latest Avant concept is not your parent’s station wagon. For starters, its 100% electric, and although Baby got back, it’s a very aerodynamic backside. The Avant shares the same dimensions as the A6 Sportback e-tron concept revealed last year: 16.3 feet (4.96 m) long, 6.4 ft. (1.96 m) wide, and 4.7 ft. (1.44 m) high, tallying it for the luxury class. This is also relative in size to current ICE models in Audi’s A6/A7 series.

Despite its height, long wheelbase, and thicc back end, the Avant concept has an aerodynamic value (cW) of 0.24, just 0.02 units higher than its A6 Sportback e-tron counterpart. 22″ wheels, short overhangs, and a flat cabin help give the Avant proportions that more closely reminiscent of a sports car than a station wagon.

As you’ll notice in the head-on image above, the view of this new A6 concept looks pretty sharp from the front, showcasing a lot of e-tron DNA we have seen on Audi’s production model EVs. This includes a large, enclosed Singleframe grill bordered at the bottom by deep air intakes for cooling the drivetrain, battery, and brakes.

The Digital Matrix LED front headlights are some of Audi’s smallest yet, and the automaker describes them as almost cinematic quality. In fact, the Avant Concept can project a video game on any wall in front of it when it’s parked or recharging for instance – it then displays virtual landscapes in an XXL format instead of on a small screen in the vehicle. We’d love to see Mariokart adapted to this feature!

The side of the body contain three small, high-res LED projectors that provide dynamic lighting effects in any language to greet occupants when the doors are opened. For added safety, the projectors also display warning symbols – like warning a biker that the car door is about to open. Four additional high-resolution LED projectors have been integrated into the corners of the A6 Avant e-tron to display turn signal projections, too.

Now, let’s talk about that rear. This Avant concept features a new continuous strip of digital OLED elements, that act like a display that can be used create almost unlimited customizable variations to fit a customer’s personal taste.

A new feature of the taillights is the three-dimensional architecture of the digital OLED elements. This makes it possible to experience the dynamic light show in a new, 3D spatial effect. We recommend checking out the video below to truly understand how these taillights function – they’re pretty cool.

Audi describes this back end as “spacious,” but has not shared any details to its cargo capacity. In fact, Audi has not yet shared any interior details yet. Instead, we’ll have to focus on the inner workings that help make this concept go.

The second concept of the Audi A6 e-tron will sit upon the Premium Platform Electric or “PPE” developed with Porsche AG. This electric platform will bring in a new era of flat, modular EVs going forward. Oliver Hoffmann, Audi Board Member for Technical Development, spoke to the platform technology and the performance in the Avant concept:

With the Audi A6 Avant e-tron concept, we are offering a completely tangible look at future production models on our new PPE technology platform. We’re not just electrifying the Avant’s successful 45-year history. What we want most of all is to use technical skill to add an exclamation point. In particular, this includes powerful 800 volt technology, 270 kW of charging capacity, and a WLTP range of up to 700 kilometers (435 miles).

These specs match the Audi e-tron GT quattro that came before it, with the 800 volt system allowing the A6 Avant concept’s 100 kWh battery to charge from 5 to 80 percent in under 25 minutes. Furthermore, its charging capacity of up to 270 kW means it can garner enough energy from 10 minutes on a DCFC to travel roughly 300 km (186 miles).

By combining this drive system and battery technology with the Avant’s “spacious” back end, Audi is calling this e-tron concept a “storage champ.” However, we’d argue it’s hard to make that claim without sharing how much interior storage the EV is actually capable of. For now, let’s call it an “exterior lighting champ.”

The future range of PPE models will include dual motor options that use electronic coordination to deliver all-wheel drive on demand. For example, Audi A6 Avant e-tron concept’s two electric motors are capable of delivering 350 kW of total output and 800 Nm of torque.

Audi explains that in the future, an A6 e-tron will be able to deliver 700 km (435 miles) of range (WLTP), depending on the drive system and model variant. In its fastest version, the series will also accelerate from 0 to 100 km/h (62 mph) in under four seconds.

These two A6 e-tron concepts represent the first Audis in the C-segment to sit upon the PPE, but their current configurations will remain concepts… at least for the time being. Audi has relayed that the first production vehicles on the PPE will be unveiled in 2023.

For now, you can check out this video explaining some of the exterior design features on the Audi A6 Avant e-tron concept: