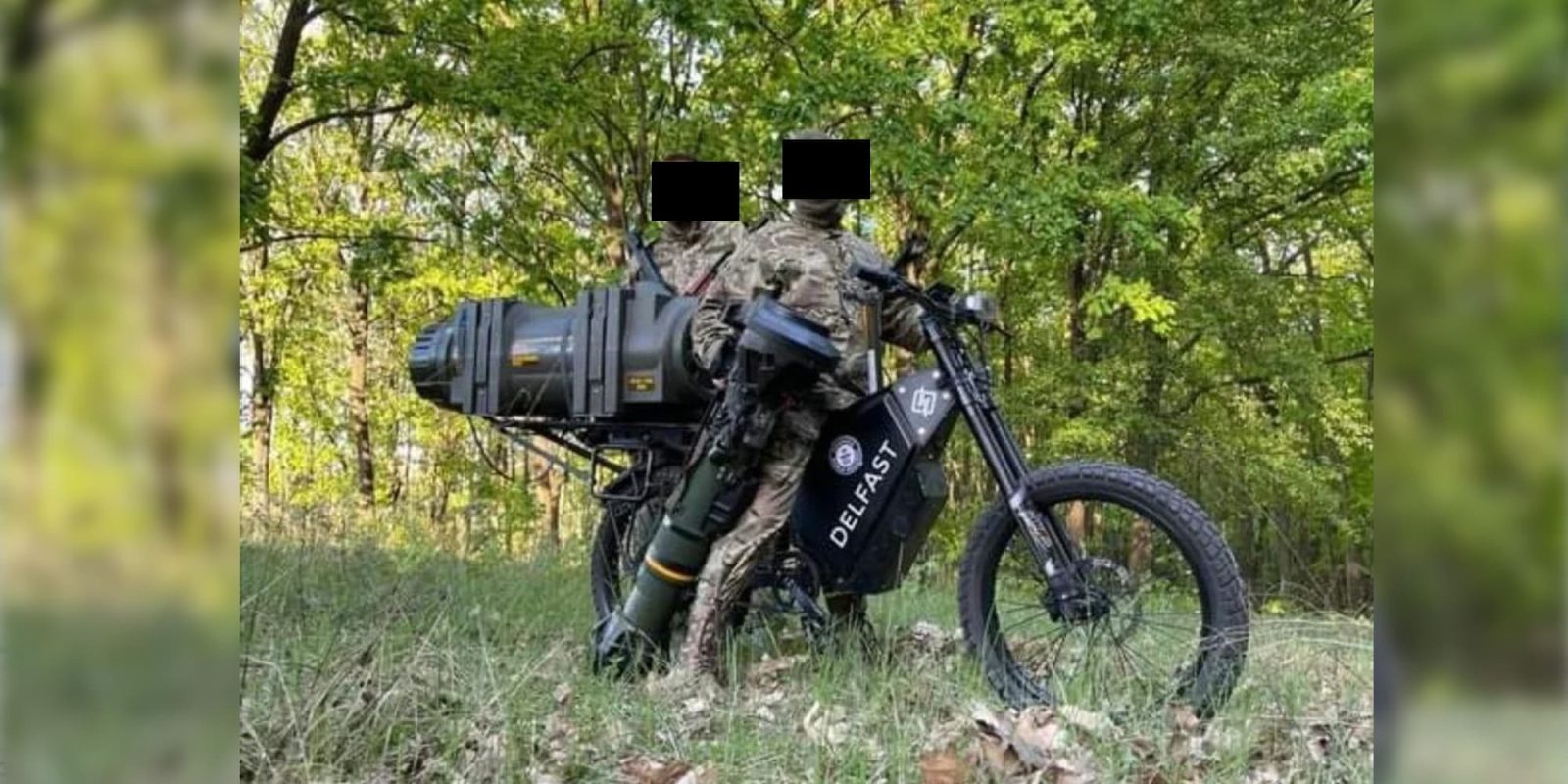 Ukrainian electric motorbike company Delfast has seen its electric bikes used for some vastly diverse tasks, such as breaking Guinness World Records and outfitting Mexican police. But their latest use is perhaps the bikes’ most important mission yet: helping Ukrainian soldiers strike a David vs. Goliath blow against Russia’s barbaric invasion of their country.

The image below shows one of many Delfast electric bikes that have been supplied to Ukrainian armed forces, who are currently using them to defend their country from the over two-month-long Russian onslaught.

Get your own Delfast Bike here

The electric bikes, which have functional pedals allowing them push their range to over 200 miles (320 km), have enough speed and power to border on electric dirt bike territory.

A hand throttle means that riders can use the pedals as foot rests when necessary, focusing instead on maintaining speed and navigating tricky terrain.

Their long travel suspension and ability to carry heavy loads has made them particularly useful for navigating forested trails or overlanding when trails are nonexistent.

The bikes used by Ukrainian defenders have been modified to carried NLAW rockets, or Next Generation Light Anti-Armour Weapons, which are specially designed to allow a single operator to destroy an enemy tank.

The rockets are designed to be human-portable and carried by infantry, but the 28 lb. (12.5 kg) weapon is much easier to haul over long distances when carried on the back of an electric bike.

Such portable anti-tank weapons are a game-changer in Ukraine’s fight to defend its sovereign territory from a Russian takeover, but their use isn’t without significant risk.

Real life isn’t like Counterstrike, and this isn’t a video game. Getting into position in an open area to fire an NLAW or the similar US Javelin missile is incredibly risky, often exposing the operator to the enemy tank’s main cannon or multiple heavy machine guns. The use of a high-power electric bike to quickly and quietly reach a firing position can significantly reduce the soldier’s exposure and improve the mission success outlook.

Another local Ukrainian company, ELEEK, has also supplied its country’s armed forces with silent, powerful electric motorbikes for use on the battlefield.

In that case, the electric motorbikes were requested for use by sniper teams.

They offer similar advantages to these NLAW-carrying electric bikes in that they help Ukrainian operators quietly reach a firing position in less time than rucking in on foot.

One of the bikes can be seen below, demonstrating its quick and lightweight riding style.

Electric motorcycles and e-bikes are rapidly becoming a common tool employed by militaries around the world.

As far back as 2018, we learned that Norway’s armed forces began testing fat tire electric bicycles in border guard patrols.

Patrol roles were also performed by the New Zealand Defence Forces in 2020 when they began testing UBCO’s electric utility bikes.

Australian soldiers have been documenting stealth electric bikes since last year, and we also saw the first application of helicopter-mounted electric motorcycles last year in an application designed for quick insertion of special operators on low-signature electric dirt bikes.

Multiple special forces units in Europe and the Middle East have also tested high-power electric mountain bikes for field use, with paratroopers even air-dropping electric dirt bikes onto the battlefield.