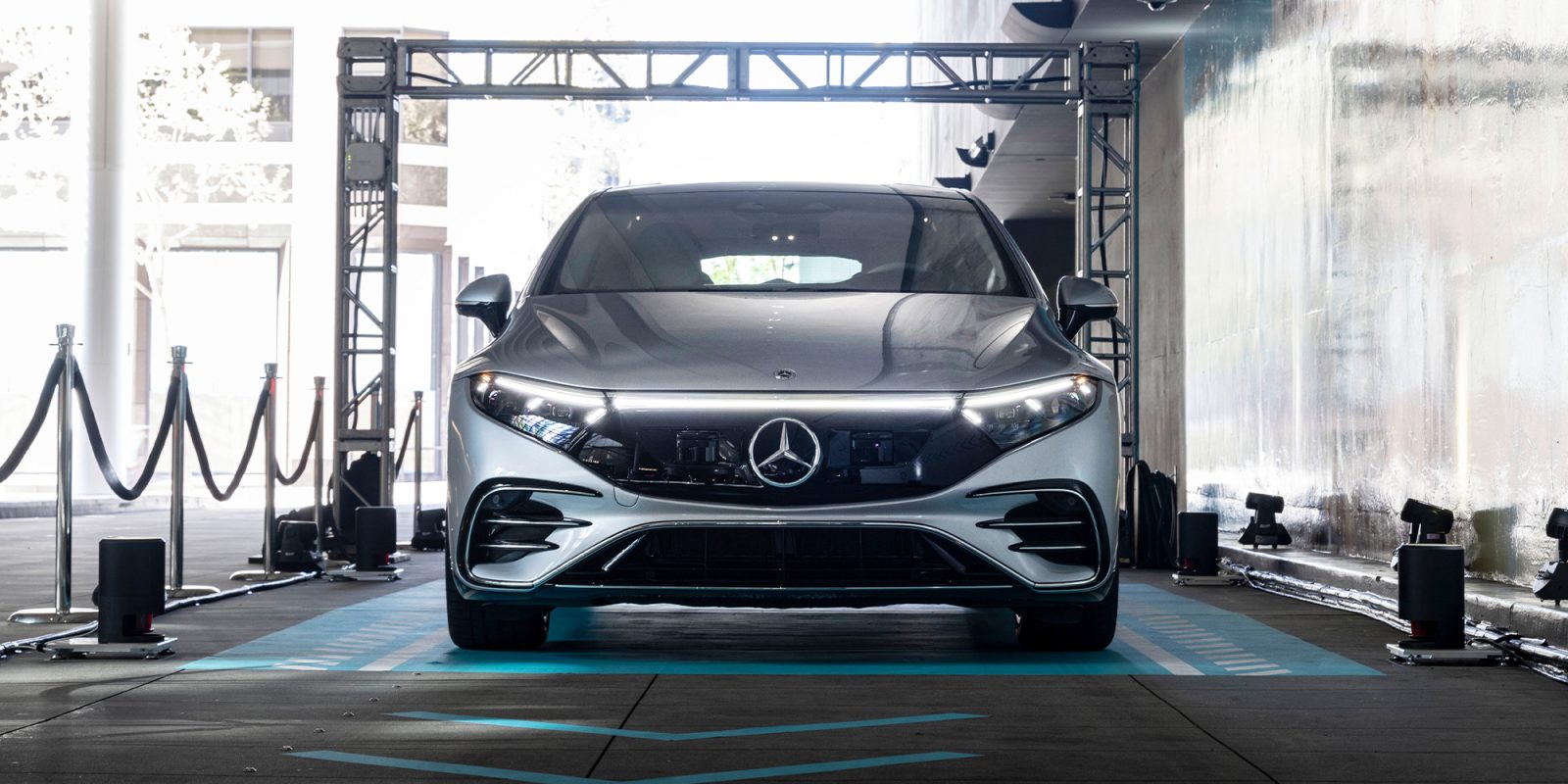 During a live demonstration at the InterContinental Hotel in downtown Los Angeles, Mercedes-Benz and Bosch offered a glimpse into the future in which our EVs will valet themselves. Using the Intelligent Park Pilot feature in the Mercedes EQS, the companies were able to demonstrate a driver pulling up, exiting the vehicle, and activating the automated valet using an app.

Mercedes-Benz is a legacy German automaker recognized as one of the global leaders in luxury autos. Despite decades in ICE vehicles, Mercedes-Benz Group AG has made more recent efforts to adapt its production strategy toward electrification, vowing to go “all-electric” by 2030.

This strategy includes several new programs ranging from R&D to physical production in order to expand global EV adoption to customers that prefer to drive the star emblem. Electric Mercedes are part of an EQ line of vehicles that began with the EQS sedan.

In the US this year, Mercedes-Benz will bring an EQB SUV to market, as well as a second EV sedan called the EQE. Additionally, Mercedes has been teasing US production of an SUV version of the EQS.

As part of a media event in Los Angeles, Mercedes showcased the EQS performing some interesting new maneuvers with the help of its partner Bosch. Together, the companies have designed and implemented an automated valet parking system in which the Mercedes EQS (and future vehicles) can park themselves.

During a demonstration in front of media in downtown Los Angeles, Mercedes-Benz and Bosch offered a potential glimpse into the future of parking, particularly in busy environments like hotels.

Using the Mercedes me App, a driver pulls into a dedicated automated valet spot and parks. At this point, they could have already reserved their parking spot at the hotel garage, to ensure there’s somewhere for the EQS to park itself.

They then activate the feature in the App, which wakes up the EV, then ensure everything is operational and safe before initiating communication with Bosch’s automated valet infrastructure. Once the system receives all green lights from its checklist, it will start the motor remotely and take over.

Our vision is that getting time back is a key component of the luxury experience our customers are looking for. The EQS gives you time back by driving itself in traffic jams on highways, but with INTELLIGENT PARK PILOT, it may also be able to park itself. INTELLIGENT PARK PILOT is a feature that together with the required infrastructure enables an automated valet service that gives customers even more comfort and relief in everyday life.

Alongside necessary infrastructural equipment, the Mercedes EQS is already equipped with the onboard technology to navigate the Bosch Automated Valet system, which allows for the entering and exiting multi-story facilities like parking garages. For this temporary demonstration, the partners used portable Lidar sensors on the ground.

However, the permanent installation of the valet infrastructure utilizes stereo sensors that are implemented into the ceiling above the vehicles as a “bird’s eye” that’s out of harm’s way from cars and pedestrians. The Bosch Automated Valet system is already operational at the Stuttgart Airport in Germany.

Both companies see this technology as a natural step toward fully-automated driving that can help save drivers time by easing the burden of finding parking and charging. It doesn’t have to stop at valet parking either – the teams at Mercedes-Benz and Bosch have already begun exploring further implementations of the autonomous low-speed maneuvers, like automated charging, car washes, payment booths at garages, and even automated movement of completed vehicles through assembly lines.

Bosch also feels this technology could be beneficial to commercial EVs and rental cars especially, allowing your rental EV to come to you, then driving away and parking itself when you return it. According to both companies, the tech is ready. They are, however, waiting on regulatory approval in Europe because this is considered a Level 4 automated system.

In the US, the companies are waiting a bit more on buildings and the necessary people required to properly implement the infrastructure. Check it out for yourself in the video of the demonstration below: