Porsche Taycan GTS sedan first drive: Getting to the track is half the fun 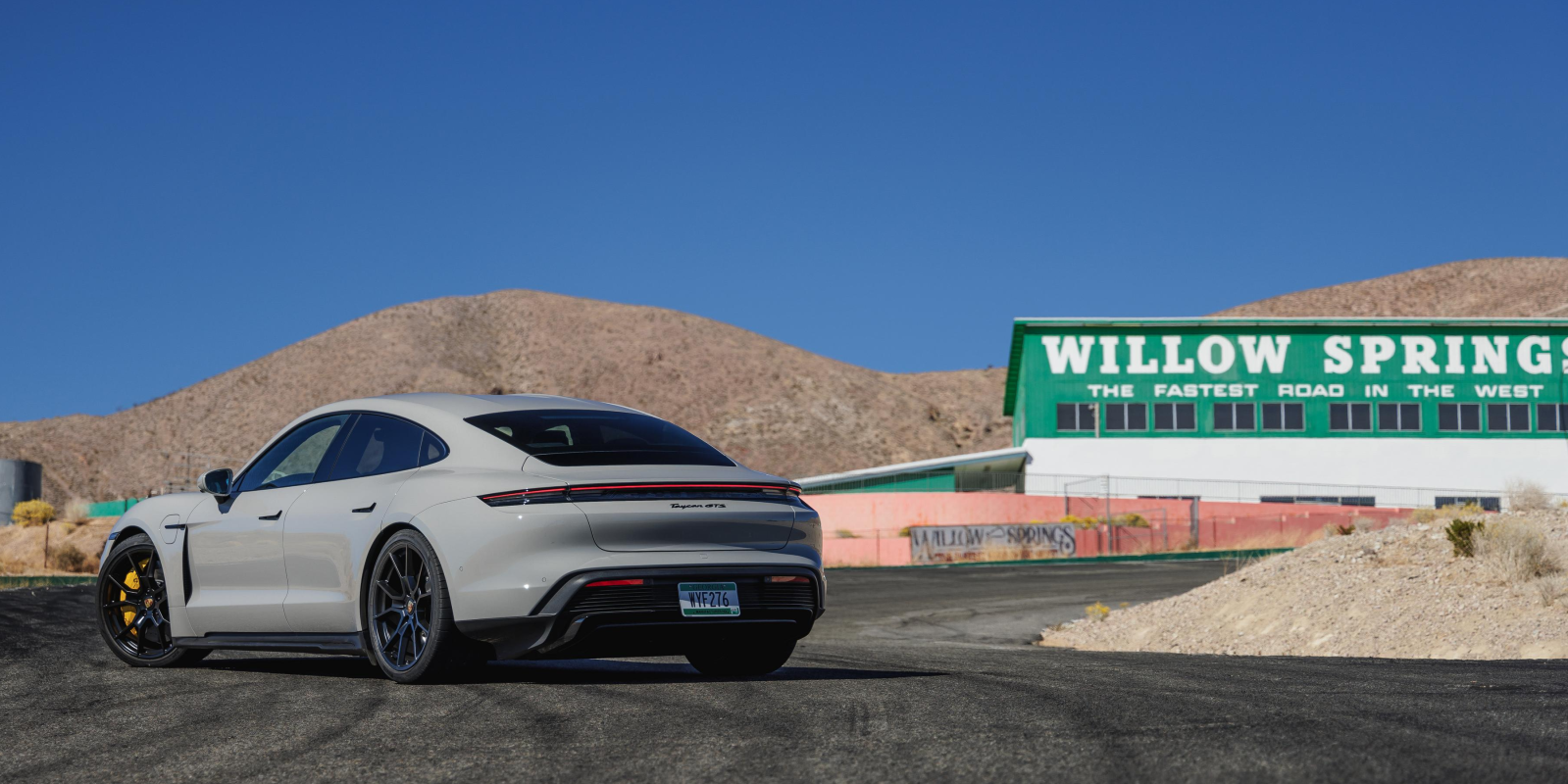 For Electrek‘s first drive of the Grand Turismo Sport (GTS), Porsche brought us out to Willow Springs race track in the high desert, northeast of Los Angeles. The cars it gave us were stock models with nothing you can’t option at a Porsche dealer. Our basic instructions were to try and follow the professional drivers ahead of us and listen for instructions— and that was pretty much it.

If you judge your automobile manufacturers by what percentage of their fleet is electrified, Porsche is the Western traditional automotive leader. Sure, Tesla, Rivian, Polestar, and Lucid are fully electric automobile companies and were founded as such, but we’re talking about electrifying a traditional ICE brand, and there’s no company as “all in” as Porsche is right now. The Taycan, in just its second full year on the market, is now Porsche’s No. 3 selling vehicle overall, its best selling car, and it recently passed the 911 in sales. Out of the 217,198 cars Porsche delivered in the first three quarters of 2021, 28,640 were Taycans (Porsche also sells PHEVs) — and that puts Taycan at over 13% of Porsche’s overall fleet.

Porsche isn’t stopping with its lead in the Taycan. It plans to produce the Macan Turbo (notice the Turbo version was missing from this year’s Macan refresh?) at the end of 2022 as a 2023 model. Shortly after the Macan Turbo production, Porsche will produce an electric Boxster and Cayman. There’s even talk of a three-row Porsche that was shown to dealers (don’t call it a minivan!). By the middle of the decade, Porsche’s top three vehicles will be electric, and it could easily be a majority electric company. That’s a pretty steep ramp, and Porsche has basically said that by the end of the decade, it plans to be 80% electric, with 911 essentially being the only remaining pure ICE model (we actually doubt that).

Because of Porsche’s interesting embargo here, I can’t tell you how I got to the track, but once we arrived at Willow Springs, we were outfitted with the requisite head gear and given a quick run-through of the Porsche Taycan GTS sedan’s different speed and suspension modes. This is a 0-60 in 3.7 seconds spec car, but I imagine folks will get closer to three seconds.

The first couple of laps I was in normal Sport mode with street suspension.

The Taycan GTS is the sporty all-rounder of the model range. It has an impressive 440 kW (598 PS; Taycan GTS models: Electric power consumption* combined (WLTP) 24.1 – 20.3 kWh/100 km, CO₂ emissions combined (WLTP) 0 g/km, electric range combined (WLTP) 424 – 504 km, electric range in town (WLTP) 524 – 625 km, Electric power consumption* combined (NEDC) 26.0 – 25.9 kWh/100 km, CO₂ emissions combined (NEDC) 0 g/km) of overboost power when using Launch Control. The sprint from zero to 100 km/h can be achieved in both body variants within 3.7 seconds. The maximum speed of the duo is 250 km/h. As a representative of the latest Taycan generation, the GTS has a particularly efficient drive strategy. The other Taycan derivatives also received this update in the new model year. In practical terms, this extends the operating range. With a range of up to 504 km, based on WLTP figures, the new sports model is the first Taycan to break the 500-km mark.

The ride is exhilarating but familiar. There are a lot of Gs being thrown around, as seen from inside the car’s computer below. The cars were German spec and didn’t have navigation or Empirical measurements, so you are looking at km/h speeds:

Then there’s the Sport plus mode with sport suspension that we added after a short break from driving. The break was for us human drivers (the cars can go all day without a break). The Sport Plus takes your driving to a whole new level of Gs.

The adaptive air suspension, including Porsche Active Suspension Management (PASM), is specifically adapted to the GTS, to the benefit of the lateral dynamics. The set-up of the optional rear-axle steering is also even sportier. The richer sound pattern of the modified Porsche Electric Sport Sound underscores the character of the new GTS model.

In my review of the Taycan Cross Turismo Turbo, I noted that a day of spirited driving was followed closely by a day with an achy neck. As I was consistently reminded on my flight home, this time around was no different— but it was so very worth it.

What can you say about the Taycan GTS on the track? Speed wise, it lies between the 4S and the Turbo, but it felt like the fastest vehicle I had ever stepped foot in. The suspension is phenomenal, and it didn’t feel like a heavy car at all, even though it is.

The added sounds that you can hear in the video above were super cool and are available in Sport Plus mode on regular roads. I imagine real professional drivers would probably be more interested in hearing the sound of the car than an artificial Star Wars type soundtrack.

Still, it’s super neat, and I’ve completely changed my mind and want the added sounds on my daily driver.

However, there is something to be said for being able to hear the speed of the car. When I first started driving electric, I had a hard time knowing my speed without looking at the speedometer. In my previous ICE car, I could match the speed with the pitch of the engine. Perhaps there is some science to adding car sound to EVs.

At $130,000, the Taycan GTS isn’t going to move the needle on getting 99% of the world off internal combustion vehicles. That said, it’s a halo car for the EV industry, and the fact that EVs are quickly eating away at Porsche’s product lineup shows every aspirational car enthusiast where the future is headed.

As for the GTS itself, it lives between the Turbo and the 4S in terms of speed and performance, but is a lot closer to the Turbo, if I had to guess. I don’t think Porsche is given enough credit for the Taycan interior — the seats completely envelop you, padding you somewhat from all of the lateral Gs that would have me sliding over to the passenger seat of my Model 3.

The Alcantara trim and particularly the steering wheel feel soft in the hand, but inspire grippy confidence. The sound system is top notch, and this GTS track car is something you could easily drive every day. The panoramic glass roof with “Sunshine control” is a gimmick, albeit a neat one.

And yet again, I came away from a Porsche event thinking to myself, “Could I possibly justify spending $130,000 on a car?” For those who can, the Porsche Taycan GTS is a thrill ride…even before you get to the track.